Police are hunting a ‘serial pest’ who smashed the windows and slashed the tyres of a mobile speed camera car in a spate of attacks on Victoria’s traffic vehicles.

The traffic vehicle was parked on the side of Bellarine Highway in Point Lonsdale, regional Victoria, at about 8:50pm when the vandal approached the car.

Police said the camera operator was inside the car, which is owned and operated by the Department of Justice, during the attack but managed to drive away uninjured. The camera operator managed to drive away uninjured (pictured, smashed driver side window of the mobile speed camera car)

‘Absolutely terrifying to be sitting in a car doing your job in the dark and all of a sudden out of nowhere comes some lunatic who attacks you with a pole,’ Mr Weir said.

‘We will not put up with it.

‘Anyone who wants to interfere with them (camera operators) will feel the full force of investigation and apprehension.’

The incident is the latest in a spate of attacks on Victorian traffic camera vehicles and operators and was nine days after a mobile speed camera was rammed by a car.

The mobile speed camera was parked in Wollert, a suburb  a suburb 26km north of Melbourne, was hit multiple times by a driver in a four-wheel-drive on June 13. 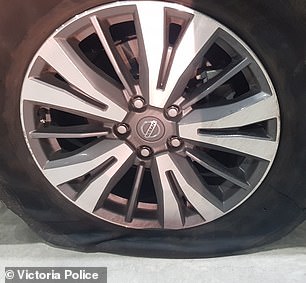 The driver crashed into the traffic vehicle at about 1.40am while it was parked on Craigieburn Road East.

The camera operator was inside the vehicle when the attack occurred but was uninjured.

On April 26, a female road safety camera operator was inside her car when a masked man holding a metal pole

On Anzac Day, a female road safety camera operator was inside her car in St Leonards when a masked man wielding a metal pole smashed the vehicles side mirrors.

Community and Public Sector Union Julian Kennelly said an operator in Tullamarine was stalked before a number of people jumped out and attacked his car.

‘He (the operator) was in the process of shifting locations … and a vehicle followed him down the road for five or 10 minutes,’ Kennelly told the Herald Sun.

‘He pulled over … and then both (the people in the other vehicle) jumped out of the vehicle and ran towards his vehicle launching pieces of wood at the camera’s car. Quite frightening.’

Mr Kennelly said a ‘serial pest’ in Parkdale had been interfering with operators for the past 14 months. 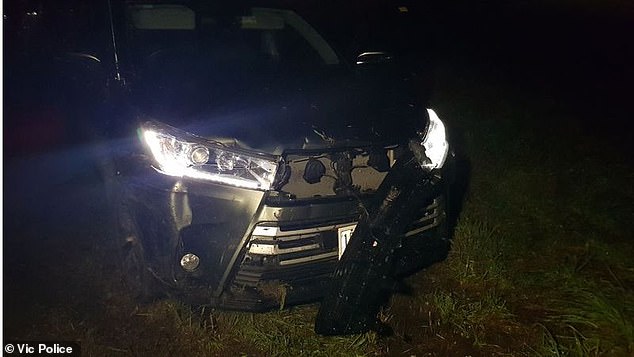 The attack comes nine days after a driver in a four-wheel-drive rammed a mobile speed camera car (pictured) in Wollert, a suburb 26km north of Melbourne, on June 13

Victorian Investigators believe one offender may be responsible for a number of the attacks.

‘To have four in two months is unusual and to have two in such a location that is close together – obviously that’s one of the lines of enquiry we’re looking at whether it’s the same person.’

Investigators would like to speak to anyone with information, dashcam footage or witnessed the attacks to contact Crime Stoppers on 1800 333 000.

Death of Kansas teenager, 17, who was handcuffed and left face down, is ruled a homicide