Australia is still persisting with lofty Covid targets which are crushing businesses and impacting everyday life even in the face of a national fatality rate of just 0.1 per cent.

Australia will join Canada and the United States – where medical regulators are largely funded by pharmaceutical companies – in recommending the vaccine to children in this age bracket, which has a vanishingly small rate of serious infection.

More than two years after the pandemic arrived on our shores, isolation mandates remain in place and there are calls from Covid zealots to re-introduce border quarantine and compulsory masks.

While such restrictions perhaps made sense when the virus was more potent and vaccine rates were still low, the measures had long since been abandoned in much of the world.

As a result of isolation requirements, our workforces are being decimated and supply chains breaking down due to staff constantly being unavailable due to an illness that is very mild in most cases – or even for incidental exposure to a positive case.

The work-from-home mandates are decimating small businesses which rely on trade from office workers, just as those businesses’ costs are soaring due to runaway inflation fuelled in part by massive government borrowing and spending on Covid mitigation measures.

The Australian Department of Health has been tracking Covid cases and deaths by age and gender across the nation since the pandemic began.

As of Wednesday, there are 327,303 active Covid cases across Australia, representing a 16.3 per cent fall since the peak of the current wave on July 25.

Of those active cases, just 1.48 per cent have needed hospital treatment (likely much lower when taking into account how many RAT tests are unreported) and there are just 162 in intensive care, or 0.05 of cases. 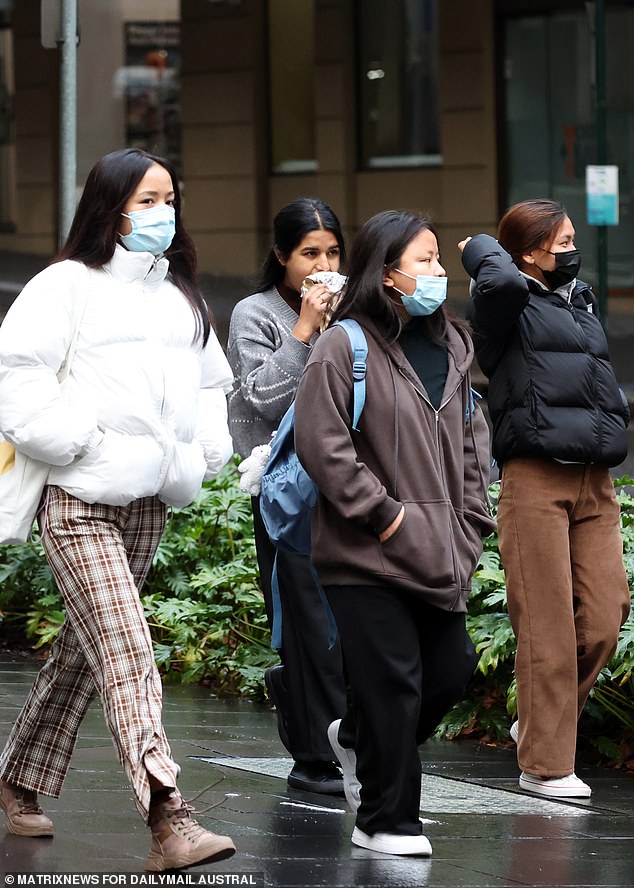 More than two years after the pandemic arrived on our shores, quarantine mandates remain in place and there are calls to re-introduce restrictions like mask wearing – which were designed to protect the vulnerable while we were striving to reach vaccination targets

Should Australia bring back some of the previous Covid restrictions?

Statistics show that the bulk of cases have been identified in the 20-29 age bracket with 885,057 recorded since January 2020.

Tragically, 28 of these known cases died with Covid. This accounts for just 0.003 per cent of cases in this age bracket. Alternatively, 99.997 per cent of 20 to 29 year olds who test positive to Covid will survive.

The age bracket with the highest fatality rate is people above 90. Over the course of the pandemic, 33,852 have tested positive to Covid and 3,070 – or 9.06 per cent – died shortly thereafter.

Even among that frail, very elderly group, the vast majority of their deaths were due to other illnesses and Covid was only recorded as a co-morbidity.

Death becomes an increasingly likely outcome the older a patient is, but only marginally, capping at 4.26 per cent for people aged between 80 and 89 before a spike in deaths over 90. 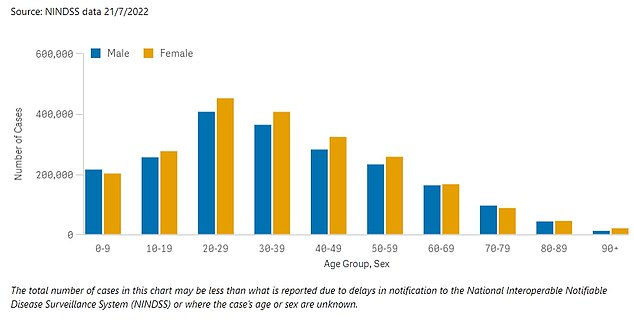 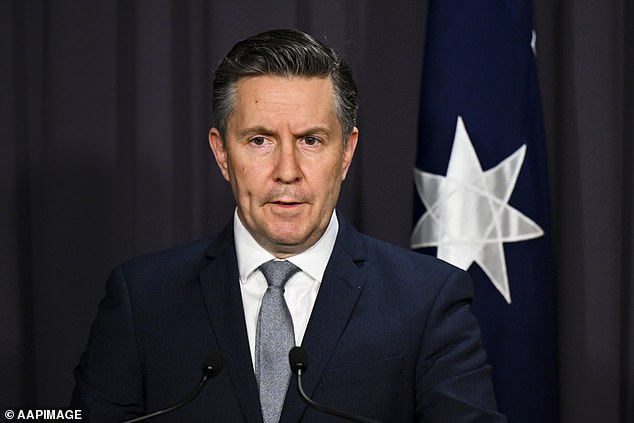 Some 93 per cent of people who die after contracting Covid have at least one other disease or underlying health condition. The average is three conditions which could have contributed to the death.

Even the hospitalisation rate of 1.5 per cent of all Covid cases massively overstates the seriousness of the illness, as anyone presenting to hospitals who has had the virus within 14 days of admission will be counted as a Covid case, regardless of what medical problem they are being treated for.

This includes people who recovered from a mild case up to a week before, and are in hospital for an unrelated reason like a broken limb or to give birth.

‘Active Covid-19 cases are defined as people who have tested positive for Covid-19 in the previous 14 days. Cases who are in hospital are considered active,’ NSW Health said.

‘It’s important to note, with the high number of Covid-19 cases in the community, many patients currently admitted to hospital with Covid-19 are receiving acute care for Covid-19 related illness.

‘However, some patients will present with conditions other than Covid-19 as their primary reason for seeking health care who require admission to hospital for non-Covid-19 related illness, condition, or injury.’

Other Australian states use use the same methods to calculate their hospital statistics. 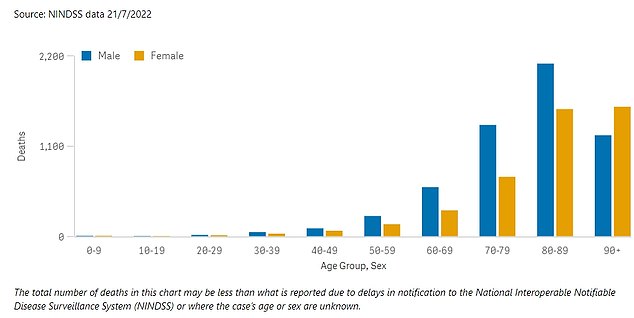 New daily Covid case numbers across Australia are high; upwards of 55,000 each day, but the decline in active cases shows even more people are beating the virus having suffered little more than mild cold symptoms.

With more than 95 per cent of the nation double vaxxed and 60 per cent triple, the overwhelming public response is for the restrictions to ease.

The vast majority of those who have caught Covid are under 50, with 3,121,953 cases so far. Just 293 people under 50 have died of the virus since the pandemic began.

The statistics show that since Australia’s mass vaccination rollout began, those under 50 faces a less than one in 10,000 chance of dying from Covid.

Across Europe and the United Kingdom, quarantine rules for people who have tested positive to Covid have adjusted over time.

It’s no longer mandatory to stay at home, particularly if symptoms are mild or non-existent, as they are in so many young and healthy people.

How Covid has hit Australia

1.5% (including hospitalisations for any reason if the patient has tested positive in the 14 days prior to admission)

Of all recorded Covid deaths in Australia, 93 per cent had ‘other conditions’ also listed on their death certificate.

On average, a person who dies with Covid has three other conditions or diseases which may have contributed to the death

Meanwhile Australians face the prospect of spending two out of six weeks of their lives in isolation.

Health authorities said in July the arrival of new sub-variants BA.4 and BA.5 meant immunity from infection lasts as little as four weeks – down from 12 weeks earlier this year.

Thousands more Australians will therefore be thrown back into isolation, unable to work or go to school, when they would have previously been considered immune.

Pandemic payments of $750 a week for casual workers without sick leave were extended until September 30, and a cost of $780 million to taxpayers.

The struggle to get staff has resulted in a sharp rise in wage levels required to attract workers, all of which gets passed onto end consumers in the form of higher prices.

The winter Covid surge is coupled with a bad flu season, directly caused by a waning of immunity levels precisely due to Covid isolation mandates over the previous two winters.

But although the seriousness of the flu and Covid are now in parallel, people who catch the flu do not need to isolate, and casual staff who are too sick to work don’t get any government assistance. 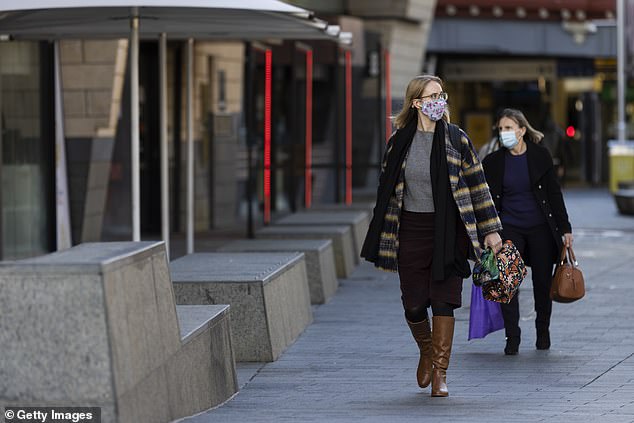 The winter Covid surge is coupled with a bad flu season, spurred on by lower immunity due to lack of exposure during Covid

He has so far resisted pressure from the political left and the self-serving special pleading from health bodies for more funds, and has remained steadfast in his pre-election stance of not reintroducing mask mandates.

‘There are two things at play,’ Mr Albanese said in justifying his stance. ‘One is mental health considerations… the imposition of controls on people’s behaviours has an impact on people’s health, that’s just the reality. 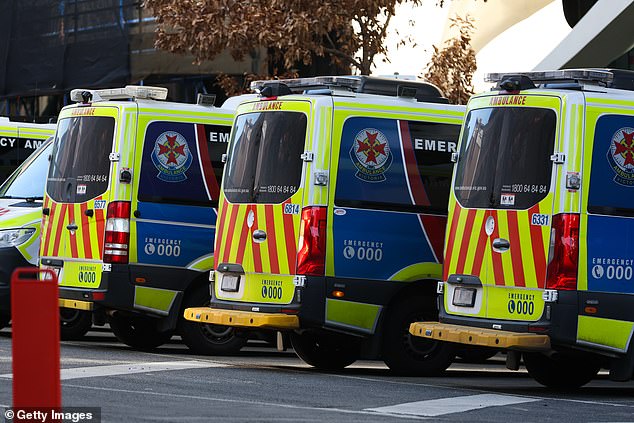 With an estimated 363,001 active cases across Australia, there are just 162 people in intensive care. Thirty-two of those patients require ventilators

Mr Albanese said the second factor was the widespread availability of vaccines and anti-viral medications.

‘The big difference between now and 12 or 18 months ago is the level of vaccinations out there, that is making an enormous difference… and the other thing that is kicking in is the anti-virals that do make a difference if people get Covid.’

Asked if border closures or lockdowns could be brought back as the country grapples with rising infections, Mr Albanese responded: ‘I hope not.’

‘People are done with those sort of economic restrictions … when I met with the state premiers and chief ministers last week, no one’s arguing for those economic constraints to be brought back,’ he told 3AW.

The ongoing decline in active case numbers, which have fallen every day for ten days, backs up modelling which forecast the third Omicron wave would likely be over by September.

The World Health Organisation has issued doomsday warnings about BA.2.75, which was first detected in India in May.

Australia is more than 95 per cent double dosed,’ Fordham said in agreement.

‘More than 60 per cent have had a booster. A fourth jab is available if you want and the hospitalisation rate is 1.5 per cent while the ICU rate is 0.04 per cent.’

The accredited medical doctor said vaccines aren’t working as well as they used to as he called for improved ventilation measures and mandatory indoor masks.

‘The history of this virus is perplexing, every six months or so a new variant appears,’ he said.

‘BA4 and BA.5 are behaving as if they’re a new variant, even though they’re a sub-variant of Omicron.

‘Six months after Christmas, here we go again with viruses that are evading the immune system.

‘As time goes on, this virus is perplexing the immunologists because it’s not behaving as expected.

Dr Swan ended the radio interview by accusing the federal and state governments of prioritising the economy over public health.

‘Mask wearing should not affect the economy to a significant extent but we’ve got to slow this down and plead with people nicely to not necessarily go to work,’ he said.

‘It’s young people as well who are getting these long-term side effects even though they’re not getting severe diseases.