Bomb disposal… Ukrainian style: The moment a brave soldier detonates an anti-personnel mine by throwing a TYRE at it

This is the risky moment a Ukrainian soldier finds an ingenious way to detonate a Russian landmine: by throwing a car tyre onto it.

A video posted to Telegram channel Face of War shows the brave soldier hurl the rubber tyre at the bomb from just a few feet away.

After successfully detonating the bomb – which sends the tyre flying high into the air – he is seen rubbing his side.

A photo posted later to the channel shows a metal landmine piece had pierced the uniformed soldier and was pulled out. 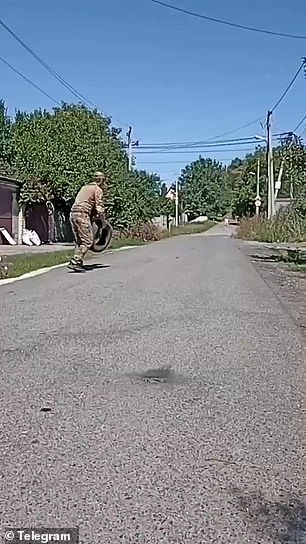 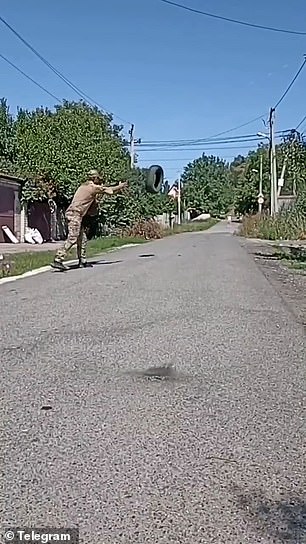 The unidentified soldier (left) crouches as he hurls the rubber tyre onto the landmine. Right: time seems to slow down as the tyre floats toward the unexploded bomb

According to Human Rights Watch, thousands of Russian landmines have been placed in Kyiv, Kharkiv, and eastern regions Donetsk and Sumy.

That’s despite Ukraine being party top the 1997 Mine Ban Treaty – although Russia is not a signatory.

Some are activated by contact, with others detonating at random intervals, posing a significant threat to civilians.

The International Campaign to Ban Landmines, which won the 1997 Nobel Peace Prize, has condemned their use in Ukraine.

A Russian diplomat told the UN General Assembly in 2020 that Moscow ‘shares the goals of the treaty and supports a world free of mines’, but views them as ‘an effective way of ensuring the security of Russia’s borders’. 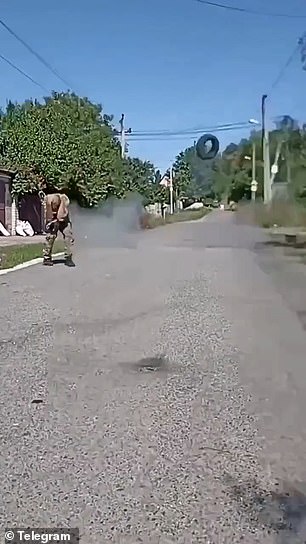 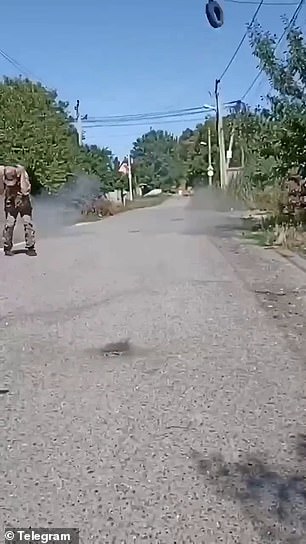 The tyre then makes impact with the landmine (left), detonating it instantaneously. Right: the explosion sends the car tyre flying dozens of feet into the air and away from the road

Oleksiy Vadatursky, 74, and his wife Raisa are thought to have been killed in a bombing overnight.

The agriculture magnate was the country’s 24th richest man with a fortune worth $430million, according to Forbes.

Mykolaiv – which has been attacked frequently – is the closest Ukrainian city to the southern front where Kyiv’s forces are looking to launch a major counter-offensive to recapture territory lost after Russia’s February invasion.

It is also on the main route to Ukraine’s primary port Odesa.

On Telegram, the region’s leader Vitaliy Kim said of Mr Vadatursky: ‘[He] did a lot for the Mykolaiv region, a lot for Ukraine.

Dogs are BETTER at detecting Covid than rapid antigen tests