Air travel chaos returns to the U.S. as more than 1,200 flights were canceled on Thursday and 452 more were called off for Friday, with Southwest Airlines leading the pack after delaying 40 percent of its trips.

According to Flightaware, which tracks the status of flights around the world, 1,207 flights within, into or out of the US were called off on Thursday, with 7,648 flights delayed.

Southwest Airlines had the most flights affected, with 356 canceled and 1,734 delayed, after a computer glitch in Phoenix caused the airline to lose connectivity.

As of early Friday, the airline has canceled 49 additional flights and delayed 11, and more than 1,200 flights are scheduled to be delayed across the US. 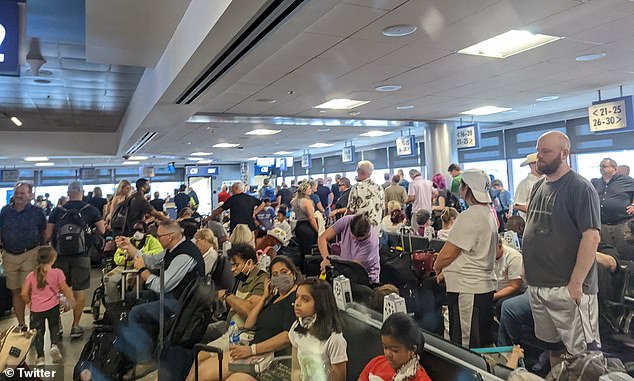 Fears of another Airmageddon in the US were stoked on Thursday as more than 1,200 flights were canceled and 7,648 delayed

Southwest Airlines had the most flights affected, with 356 canceled and 1,734 delayed, after a computer glitch in Phoenix caused the airline to lose connectivity. Pictured: Crowds waiting for news about their Southwest flights in Las Vegas 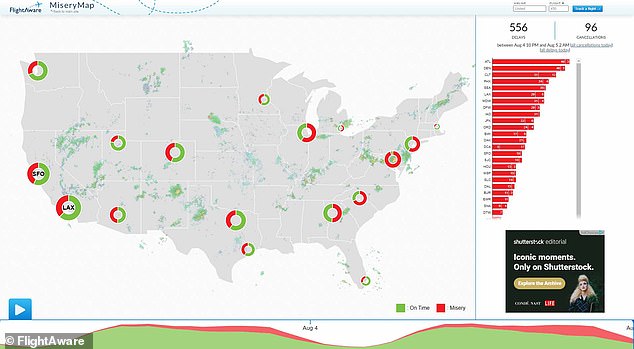 According to Flightaware, which tracks the status of flights around the world, 452 flights have been canceled as of Friday and 1,234 have been delayed 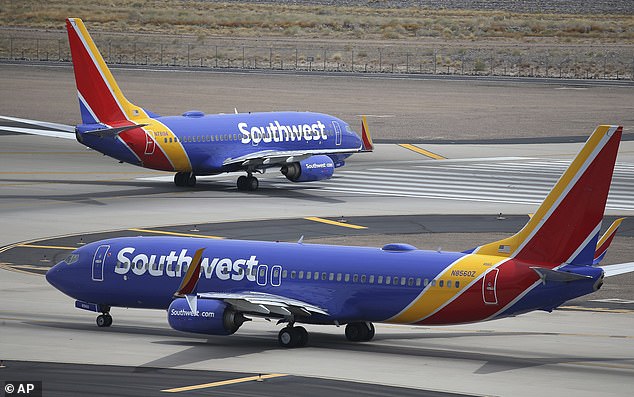 Southwest Airlines said the glitch issue was fixed before Thursday noon, but by then, hundreds of flights had been affected 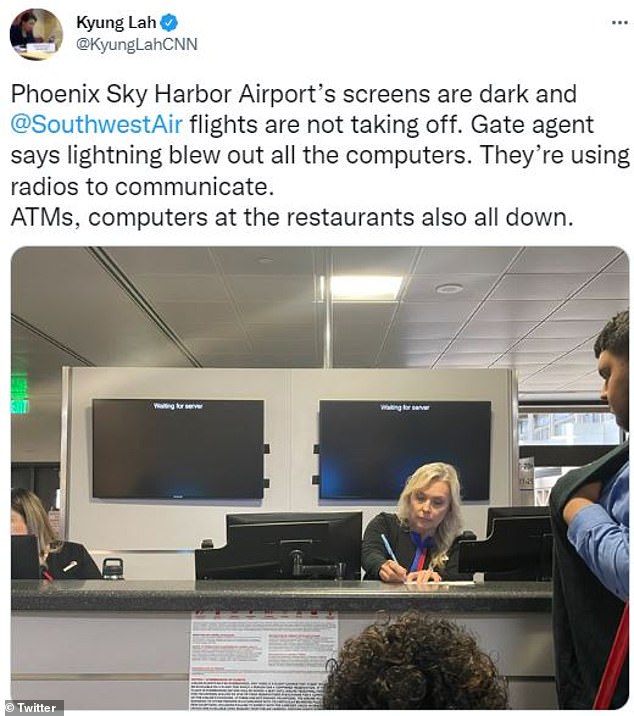 Southwest Airlines spokesman Dan Landson said in a statement that the airline was affected by early morning storms that caused outages at the Phoenix Sky Harbor International Airport.

Although Landson said the issue was cleared before noon, hundreds of flights were already affected by the outage.

The cancellations and delays caused travelers to vent their frustrations on social media, slamming the airline for the long waits and lack of service.

Twitter user Alexis Nicole said she experienced multiple delays on Thursday, tweeting that this was her second ‘bad experience with Southwest Airlines.’

Another Twitter user with the handle Julianne wrote about her horrible experience with the airline company.

‘Southwest Airlines u guys are really testing me,’ she tweeted. ‘First changing my flight without notifying me, then putting my bags on a different flight than me, THEN losing my bags while delivering them to me??

‘No compensation AND I got yelled at by two customer reps…INSANE.’

Fellow Twitter user Tori echoed the frustration and pleaded for the delays to never happen again.

‘My flight was supposed to leave 6 hours ago and I’m just now boarding. Please don’t hurt me like this again. I’m begging you @SouthwestAir.’ 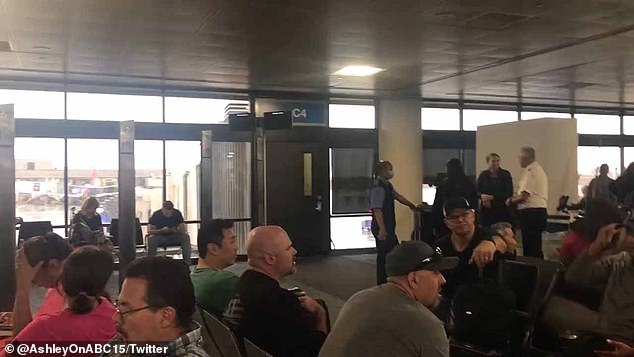 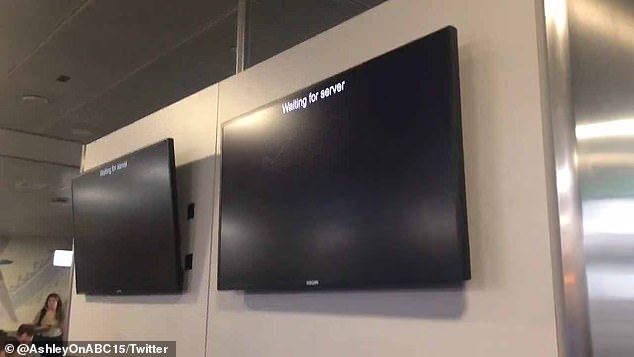 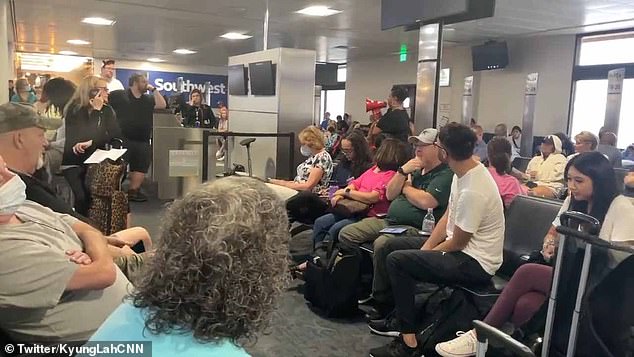 As of Friday, Southwest Airlines has canceled 49 additional flights and delayed 11

Along with the issues with Southwest, travelers also experienced headaches with American Airlines, which canceled nearly 200 flights on Thursday and delayed 877 trips, about 26 percent of flights.

As of Friday, American is leading in reschedules with 98 flights called off and 39 delayed.

The rescheduling comes as the airline announced that it would be cutting 2 percent of flights from its schedule in September and October, CNN reports.

American called the cuts ‘proactive adjustments’ in order to accommodate the resources it currently has available and build a ‘buffer’ into the remainder of its summer schedule.

The airline says it will reach out to passengers directly with ‘alternative travel options’ and provide full refunds to those who reject the new flight arrangements.

It comes as the US Department of Transportation proposed a new rule that would expand the circumstances when airlines must offer refunds. 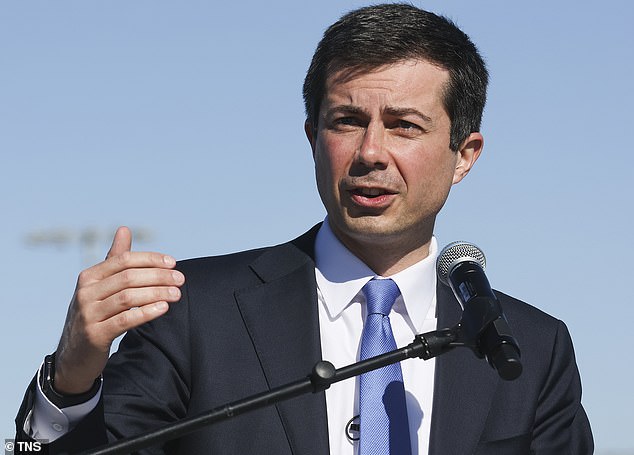 Currently, passengers are only entitled to refunds if an airline has ‘made a significant schedule change or significantly delays a flight and the travelers chooses not to board the flight.

The DOT does not define what ‘significant’ means in this context, but the new proposal would change that.

Under the new rule, significant changes would be defined as changes that affect departure or arrival times by three hours or more in domestic flights and six hours or more for international flights.

It also includes if changes are made to the airport the flight is arriving at or departing from, as well as changes to the number of connections and if someone experiences a big downgrade in their travel experience.

‘This new proposed rule would protect the rights of travelers and help ensure they get the timely refunds they deserve from the airlines,’ Transportation Secretary Pete Buttigieg said in a statement.

The current number of Americans traveling has increased since the height of the pandemic, but remains lower than the pre-covid era.

On Wednesday, The US Transportation Security Administration screened more than 2.1 million passengers at airports nationwide, about 86 percent from the same day in 2019.

Josh Brolin shows off his workout routine to while preparing to appear in Dune: Part Two

Is Macron trying to tell Boris something? French President and PM engage in gesture politics