Pregnant women who catch Covid within a month of their due date are at greatest risk of complications, research suggests.

But doctors insist the dangers are tiny to mothers-to-be who are vaccinated — and urged women to keep coming forward for their vaccines.

Expectant mothers who caught Covid within 28 days of their due date were twice as likely to give birth prematurely.

And they were up to four times more likely to have a stillbirth, Edinburgh University researchers found.

Experts did not speculate on why mothers-to-be who catch Covid late in pregnancy are most at risk — but the internal stress of carrying a baby can weaken the immune system.

Vaccine hesitancy has been common among pregnant women and those trying to conceive due to concern about fertility.

Scientists tracked 87,000 mothers-to-be in Scotland between December 2020 and October 2021 to look at their risk from Covid. 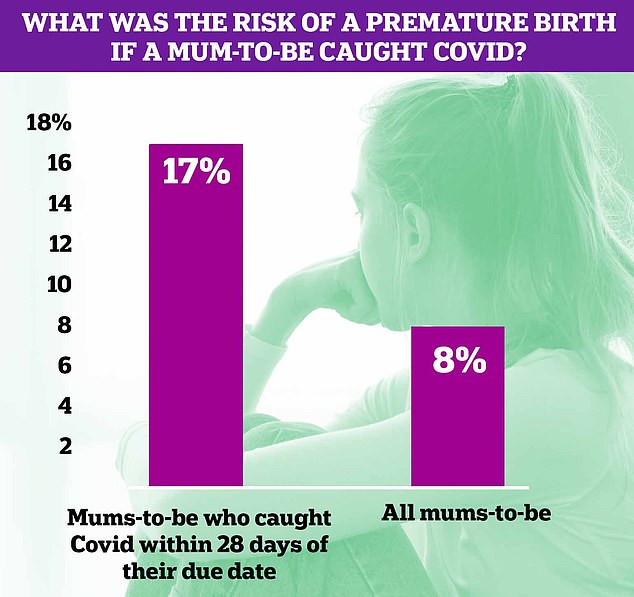 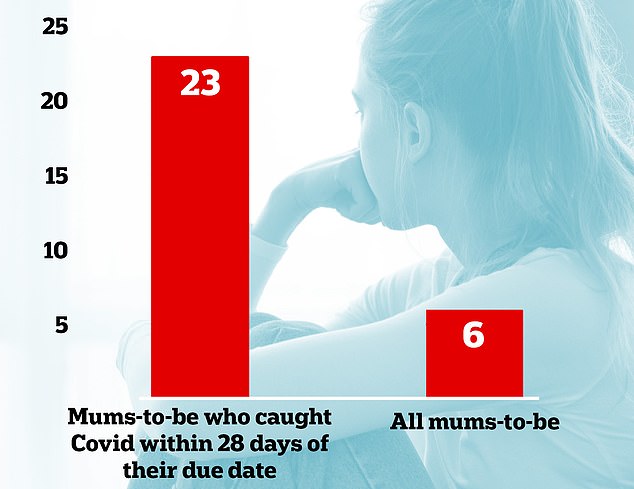 Pregnant women who caught Covid 28 days before their due date were almost four times more likely to have a stillbirth or a neonatal death shortly after birth, compared to other expectant mothers in the study 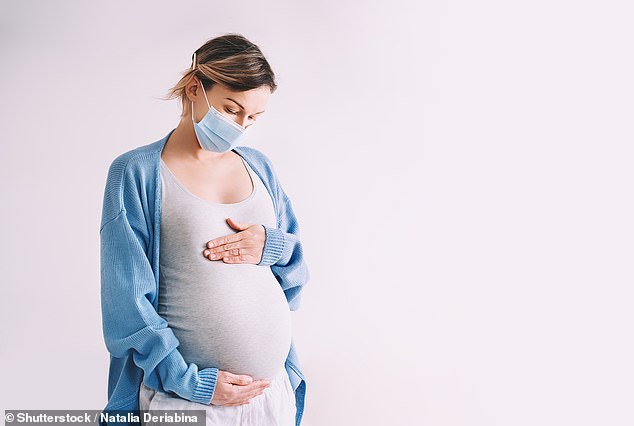 All of the baby deaths among the 87,000 people in the study occurred in unvaccinated women (stock image)

My daughter might still be alive if she’d been vaccinated, says father of 24-year-old

A mother who died after falling ill with Covid would probably still be alive had she been jabbed, her devastated father has said.

Sadie Exley, 24, was pregnant with her second child when she suddenly started suffering from migraines and chest pain.

She was diagnosed with a blood clot in her lung, and then caught Covid.

Her condition deteriorated and a week later she was taken to hospital having become paralysed on one side.

The shop worker was transferred into intensive care at Leeds General Infirmary but tragically died earlier this month after a brain haemorrhage.

Thankfully, doctors were able to save her baby son Elliot who was delivered by caesarean section at 29 weeks weighing just 2lbs 1oz.

Her father David said doctors had told him they thought ‘she’d still be here’ had she not been taken in by anti-vaxxer misinformation.

‘Covid does a lot of things,’ said the 57-year-old. ‘It works on your weaknesses within your body.’

Mr Exley claimed his daughter wasn’t vaccinated as Elliot’s father had ‘watched YouTube videos and was against it’.

Miss Exley, who worked at B&M in her home town of Batley, West Yorkshire, was also mother to two-year-old girl, Harper.

The vast majority of birth complications, which also include Covid-related ICU  admission, also occurred in unvaccinated women, the researchers said.

There were 23 extended perinatal deaths, where a baby dies in the womb or within 28 days after birth, per 1000 births in women who caught Covid a month before their due date.

This was a near four-fold increase compared to just six extended perinatal deaths per 1,000 births among all mothers-to-be.

All baby deaths recorded during the study occurred to women unvaccinated against Covid at the time of their infection.

Additionally, 17 per cent of mothers who gave birth while having Covid had premature babies, compared to just 8 per cent for all mothers.

Independent experts hailed the study as another reason to get a Covid jab if you’re pregnant or if you are trying to conceive.

Pregnant women were initially told not to get Covid vaccines when they first rolled out, as is standard practise with most medicines.

Original jab trials didn’t include them for ethical reasons, so experts had to wait for more data to accrue.

But a mountain of studies have since shown them to be safe and effective.

Public health experts have doubled down on calls for pregnant women to get the jab after it emerged only 25 per cent of expectant mothers were vaccinated.

The latest study also found unvaccinated mothers were 77 per cent more likely to catch Covid than the un-jabbed.

They were also more likely to need medical care for the virus, accounting for 91 per cent of pregnancy hospital admissions for Covid and 98 per cent of Covid pregnancy ITU admissions.

More recently there have been concerns about fertility in women trying for babies, with misinformation about mRNA vaccines in particular getting into the womb and affecting ovulation.

To address this the Scottish study doctors also measured the potential risk of birth complications among pregnant women within 28 days of receiving their Covid vaccine.

They found no significant difference between expectant mums who got the jab and among the general rates for pregnant women.

Study lead Professor Aziz Sheikh said the findings demonstrated the protection a Covid vaccine could offer to pregnant women and urged mums-to-be to take up the jab.

‘Our national data show that being vaccinated during pregnancy was associated with reduced risk of serious outcomes for both mother and baby,’ he said.

‘As cases of Omicron continue to rise, I strongly encourage all pregnant woman to take up the offer of a vaccination or booster as these will help protect them and their unborn child.’

Dr Rachael Wood a consultant with Public Health Scotland, who was also involved in the study, added: ‘Vaccination can be given at any stage of pregnancy, so I strongly encourage women who are pregnant, or hoping to become pregnant, to get fully vaccinated as soon as possible.’ 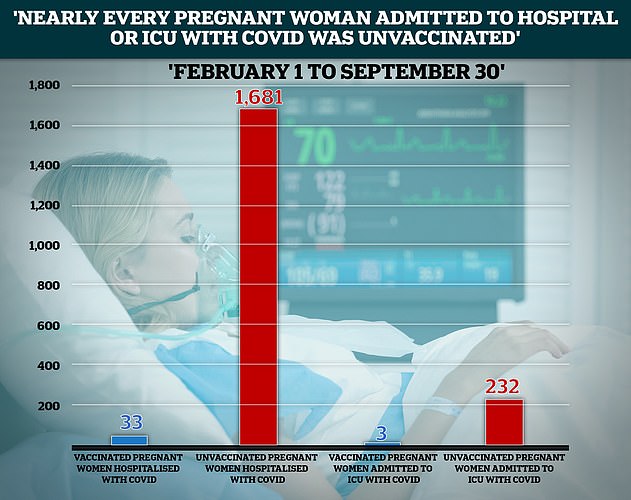 Professor Chris Whitty has previously urged mothers-to-be get jabbed, sharing ‘stark’ figures that just 33 vaccinated pregnant women were admitted to hospital with Covid between February and September. For comparison, 98 per cent of hospital admissions (1,681) were among unjabbed mothers-to-be. And just three infected pregnant women admitted to intensive care were vaccinated, compared to 232 infected unvaccinated women, he said

However,] the authors stressed it was impossible to say if Covid had directly contributed to the deaths or preterm births as they did not have access to detailed clinical records for each individual women.

Experts independent of the study also welcomed the findings, with Professor Marian Knight and expert in maternal health at University of Oxford saying it was ‘extremely robust’ and highlighted the ‘protective effect’ of jabs.

He added: ‘There is an urgent need to ensure that pregnant women can be enabled to receive vaccination wherever they receive care, including in antenatal clinics, in order to prevent further tragic losses of either mothers or their babies.’

Dr Victoria Male, an expert in reproductive immunology from Imperial College London, added: ‘The study presents sobering findings about COVID infection in pregnancy, but reassuring ones about vaccination.’

Professor Andrew Shennan, an obstetrics expert, hailed the paper as the first of its kind to evaluate the benefits of Covid vaccination in mothers for babies .

‘The benefit of Covid vaccination to improving outcomes for the baby has not been previously evaluated,’ he said.

Health experts and the NHS have struggled to convince pregnant women to get the vaccine despite a plethora of studies showing it is safe.

There have been fears that many mothers-to-be have been convinced that the Covid jabs pose a danger to their baby by anti-vax conspiracy theorists operating on social media.

Some estimates have put the number of pregnant women who chose to get the Covid vaccine as low as one in four.

Officials have desperately urged expectant mums to take up the jab citing stats showing that 98 per cent of expectant mothers in ICU are un-jabbed.