An MP accused of threatening to throw acid over a suspected love rival has been described as ‘warm-hearted’ in a character reference written by former Labour leader Jeremy Corbyn.

Claudia Webbe, 56, allegedly called Michelle Merritt, 59, ‘a slag’ and said she would send naked photos of her to her family.

Ms Webbe allegedly carried out the campaign of harassment after becoming suspicious of Ms Merritt’s relationship with her partner, Lester Thomas, a Chelsea FC scout.

She is currently sitting as an independent MP for Leicester East after being suspended by the Labour Party.

She arrived at Westminster Magistrates’ Court holding hands with Mr Thomas and is due to hear her fate later today.

A number of character references from former Labour colleagues were read out Wednesday with Mr Corbyn describing her as a ‘warm-hearted person’ who is particularly ‘dedicated’ to issues of social justice.

The former party leader wrote: ‘Claudia is a person who is very committed to ensuring justice is done, and is prepared to state uncomfortable truths when it matters. 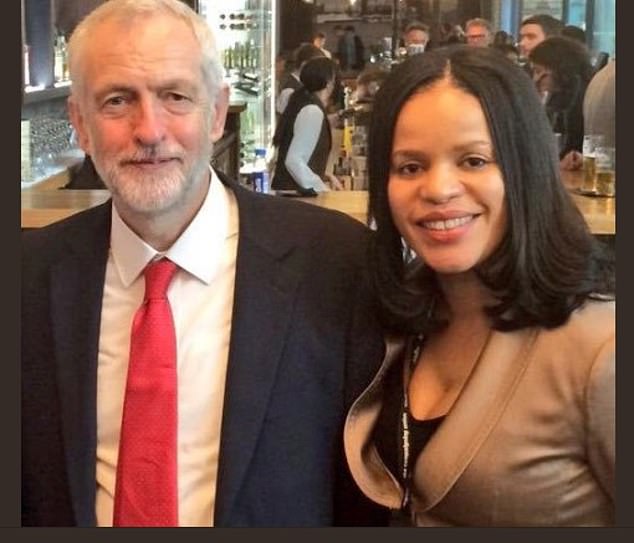 ‘I have the outmost respect and confidence in her, and as someone who has known her well for many years, I have no hesitation in recommending her as a person of good character, that makes an important contribution to our world.’

Meanwhile former shadow chancellor John McDonnell wrote: ‘I know her to be an honest, responsible and extremely caring person.

‘In all that she does, Claudia shows her empathy and emotional understanding.

‘Claudia will always go the extra mile to help someone.

‘She has demonstrated, both as a trade unionist representing her members and as a member of parliament representing her constituents that she has that human quality that enables her to relate to others, understanding their concerns and gaining their trust.

‘She is meticulous in her behaviour, always polite and respectful and mature in her judgement.

‘In the most challenging situations I have witnessed her respond with sincerity and calm.’

Last month Ms Merritt told the court the MP’s calls made her feel ‘worried and unnerved’.

She said: ‘When you’re being called and there’s no one answering it unnerves you, especially as a woman who lives alone.

‘We’ve all seen the films. You don’t know who is calling you, who is watching you.’

When Ms Merritt received a call on Mother’s Day 2019, in which Ms Webbe identified herself, she decided to call the police.

Ms Merritt told the call handler: ‘I was with my daughter celebrating Mother’s Day at the time but now that’s gone and the reality has just hit me.

‘She works for the Labour Party, she is in the public arena and she’s accusing me of, in her words, “slagging around with her boyfriend”, which I’m not. 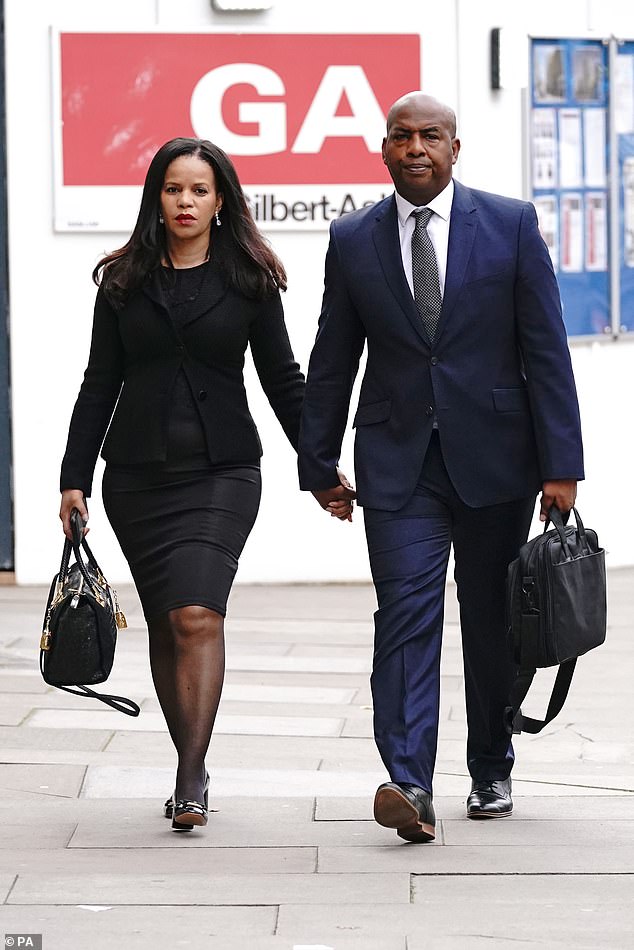 ‘She’s threatened to throw acid over me, she knows where I live, she’s going to send pictures of me and him to my daughters.’

Police officers spoke to Ms Webbe and Ms Merritt hoping that would be the end of it, the court heard.

But on April 25 last year, Ms Merritt received two calls, both eight seconds long and both from the same number.

Ms Merritt told the court: ‘I just hung up very quickly. I didn’t want to speak to her.

‘[Having received those two calls] I had to somehow prove that she was calling me because until that date all the calls had been no caller ID and the first threat call wasn’t recorded…so I called back the number that was on my phone.’

In the recording, played to the court, Ms Webbe answers the phone and immediately begins shouting at Ms Merritt.

Webbe says: ‘Why are you still butting in and getting with Lester? Why, why?

In the background Lester Thomas, Ms Webbe’s partner, can be heard shouting: ‘Don’t listen to her, send me a message whenever you like.

‘Michelle, come off the phone and call the police.’

‘Get out of my relationship!’

‘Get out of my relationship!

Giving evidence last month Ms Webbe admitted she rang Ms Merritt on April 25 because her and Mr Thomas had ‘repeatedly breached lockdown’ rules by meeting up.

She said she was arguing with Mr Lester when Ms Merritt called her back.

Asked whether she had ever made withheld calls to Ms Merritt, threatened to throw acid on her, called her a slag and threatened to send naked pictures of her to her family, Ms Webbe told the court: ‘I’ve spent my lifetime campaigning for the rights of women, challenging this kind of behaviour.

‘I would never use such expletives, such derogatory terms about another person let alone another woman.’

She said: ‘Lester said he had met up with Michelle and I had said “you can’t really do that, we’re in a national lockdown”. 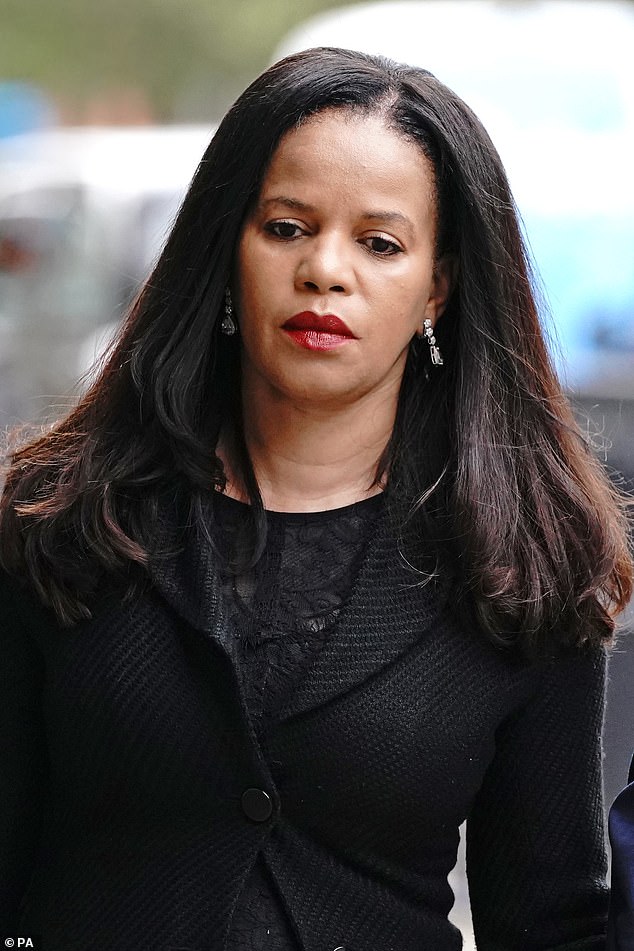 Webbe says: ‘Why are you still butting in and getting with Lester? Why, why?

‘He’s not your friend, he’s with me and I don’t want you to be in touch with me,

In the background Lester Thomas, Webbe’s partner, can be heard shouting: ‘Don’t listen to her, send me a message whenever you like.

‘Michelle, come off the phone and call the police.’

‘GET OUT OF MY RELATIONSHIP!

‘GET OUT OF MY RELATIONSHIP!

Ms Merritt then informs Webbe that she is recording the calls and will ‘leak it to the press’ before hanging up.

‘Lester doesn’t really believe in cover and I felt I needed to tell Michelle that she shouldn’t be breaking it.

‘He believes it’s a hoax, he doesn’t want to get vaccinated. He doesn’t believe it.

‘He felt that he was an essential worker and he could continue with his everyday life.

‘He saw nothing wrong with it and therefore meeting up with Michele was something that he did.

‘I said ‘well you actually can’t do that’ but he was not wanting to listen so I asked Michelle could she not breach lockdown with Lester.’

‘He told me Michelle needed him and so he had no choice.

‘The conversation between Lester and I became hated.

‘I attempted to call Michelle twice on this day to understand why she had repeatedly breached lockdown with Lester.

‘Michelle then called me back in the middle of this.

‘During the call I was having two conversations at once and I repeatedly told Michelle to get out of my relationship and by this I meant that she should not be relying upon Lester for support as they were not in a relationship.

‘I did not threaten to disclose photos of her – this was a comment directed at Lester because he had been physically violent and I was trying to get him off me.

‘Eventually he smashed my phone. 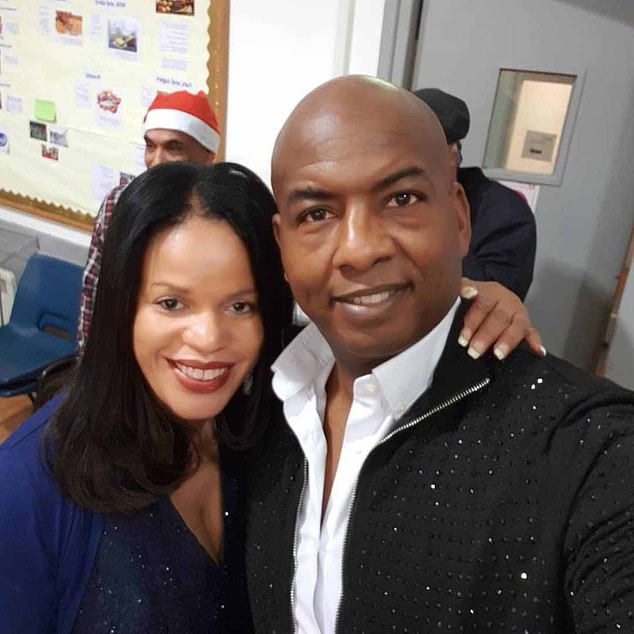 Her voice breaking, Ms Webbe continued: ‘He was constantly rebuking me, ridiculing me, goading me, as though this is not something that is as serious as people make out and that he can do what he wants.

‘It was just a terrible situation and I wanted Michelle to understand and just try and help me. I just wanted her to stop engaging with him for the sake of the pandemic… I was just so angry with Lester.’

On the ‘naked photographs’, Ms Webbe said they were a reference to an argument over how her still current partner Mr Thomas had gone to St Lucia for a trip that would have included their engagement.

She told the court: ‘When I was running to be an MP for Leicester East, we were due to go to St Lucia.

‘I couldn’t go, and Lester carried on and went ahead to St Lucia and he had a picture of himself when I would say he was naked from the waist up.

‘He or his family had taken that picture and therefore I wanted to know who had taken the picture.

‘He wasn’t forthcoming with who he had taken the picture. He was naked from the waist up.’

She added: ‘My partner was goading and gaslighting me. He knew that we were in a domestic.

‘He knew what he was doing. He knew that he was grabbing my arm. He knew I was telling him to stop.

‘This is about denial and goading and gaslighting and coercive control.’

Webbe continued: ‘I was angry with Lester. My anger was directed at Lester.

‘She [Ms Merritt] called me in the middle of this argument that I was having with Lester.

‘She called me and I was asking her to get out of my relationship as I was continuing an argument with Lester that had got out of control and is probably one of the worst arguments that I’ve had.

‘I’ve never had a neighbour call in regards to a domestic abuse where I’m left screaming and my phone is broken at the end of it.’

She added: ‘I felt no anger toward Michelle and I’m sorry for what that tape portrays because it’s not my finest moment but it wasn’t intended to cause Michelle any harm and it just is to me very embarrassing.

‘It’s not something I ever want to repeat…I just would hope that we would never ever go there again.’

Ms Webbe entered the House of Commons in December 2019, winning the seat formerly held by Keith Vaz, the Labour veteran who retired from Parliament in the wake of a scandal.

She was a councillor in Islington between 2010 and 2018 and was a member of Labour’s ruling National Executive Committee.

Earlier in her career, she was a political adviser to then-London mayor Ken Livingstone.

District Judge Paul Goldspring is due to give his verdict later today.

Cops hunting for missing Hawaii girl, 6, ‘find bag of toys and slippers near Air Force Base’