England fans ‘do not need’ an extra bank holiday and can ‘find their own way’ to celebrate the Lionesses’ historic Euro 2022 win, according to a Government minister.

Calls are growing this morning for a ‘day of celebration’ after Sarina Wiegman’s side made history by becoming the first England team to win a major football trophy since 1966.

Last year, Prime Minister Boris Johnson did not rule out an extra Bank Holiday if the Men’s’ side beat Italy in their delayed Euro 2020 final at Wembley.

But the Government has batted back calls for an extra day off for workers in England if the Lionesses triumphed, saying it would be a ‘considerable’ cost to the economy.

Bank Holidays are believed to cost the UK around £2.3billion a day. And the UK has already had an extra bank holiday this year, to celebrate the Queen’s Platinum Jubilee.

In the build up to last night’s thrilling win, Labour leader Sir Keir Starmer has called for a ‘day of celebration’ to mark England’s success. And football fans have today taken to social media to call for an extra Bank Holiday.

But work and pensions secretary, Thérèse Coffey, today appeared to pour cold water on the idea, saying it should be down to football fans to arrange their own celebrations.

She told LBC’s Nick Ferrari: ‘I know the Lionesses are gathering this morning in Trafalgar Square.

‘I expect that they will be wanting celebration and to be open with you, there is no official Liz for Leader policy as I’m aware, I think people can find their own ways to celebrate and don’t need an extra holiday to do that. 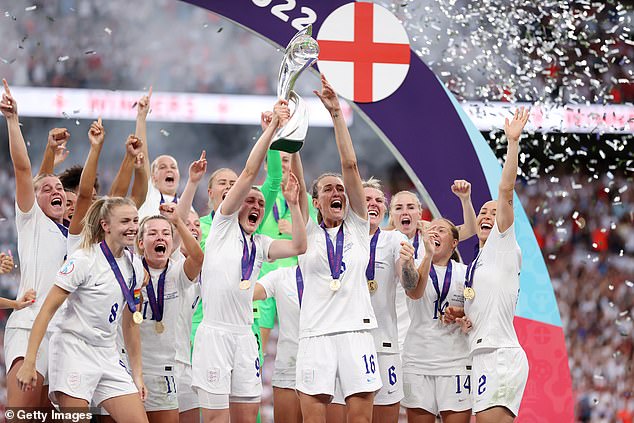 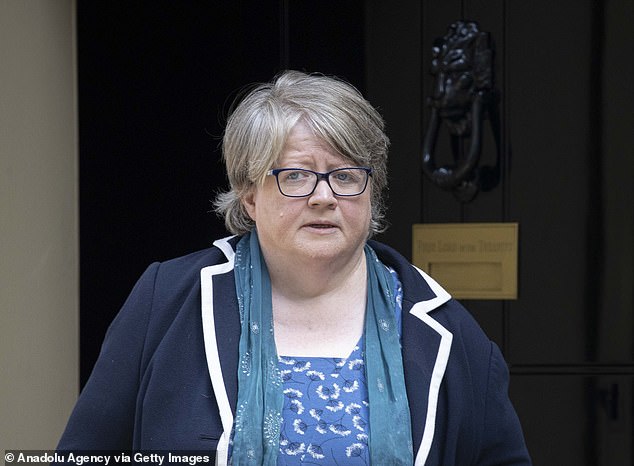 Work and pensions secretary, Thérèse Coffey (pictured), today appeared to pour cold water on the idea, saying it should be down to football fans to arrange their own celebrations.

Some football fans joked that the Bank Holiday should be exclusively for women, and former England-striker-turned-pundit Ian Wright – who has passionately backed the women’s game while presenting the tournament.

‘But it has been a great tournament. And honestly the sheer jubilation yesterday was extraordinary and I know the millions of people watching and listening to it will have been inspired as well.’

It comes amid increasing calls for the Government to mark England’s historic Euro 2022 win last night.

England’s heroic Lionesses were congratulated by the Queen and then partied late into the night – including wild dancing at Wembley, on the team coach and even in the car park outside their hotel – after making history and beating Germany 2-1 at the Euro 2022 final with more celebrations with fans due today.

The 87,192-strong attendance in the stadium smashed the record for either a men’s or women’s Euros final and saw the team end more than 50 years of hurt by delivering the nation’s first major football trophy since 1966.

In extra time Chloe Kelly fired them into the history books after beating Germany in a tight final that captivated 15million at home and tens of thousands watching in pubs and fan parks across the country.

The team were also enjoying themselves, singing Sweet Caroline with the crowd before enjoying a few beers and some dancing in the changing room at Wembley.

There was also joyous dancing on the team bus and at the hotel in west London – as well as tears of joy as the players were reunited with their families.

Today thousands of fans will be able to celebrate England’s Euros win with the players in London later.

Up to 7,000 supporters will have the opportunity to join the team for a daytime event hosted by veteran Lioness Alex Scott in Trafalgar Square, where fans were dancing in the fountains last night.

Supporters will be able to gain free entry on a first-come first-served basis from 11am on Monday, and can enjoy live music from DJ Monki while tournament highlights are shown on screens.

The players and their manager, Sarina Wiegman, will take part in a Q&A session before lifting the trophy.

But England fans have called on the Government to agree to an extra Bank Holiday to mark the Lionesses’ win.

After the Men’s team qualified for the final of Euro 2020, Prime Minister Boris Johnson had faced similar calls to hold a bank holiday if they won.

Speaking before that match Mr Johnson did not rule anything out but said that announcing a holiday would be ‘tempting fate’.

The Government did not have to make a decision in the end, as England lost the match on penalties.

However with the Women’s side now having clinched a tournament victory, pressure is growing for an extra Bank Holiday.

One fan wrote on Twitter: ‘Give the people of England a Bank Holiday. This is historic! August 1 should be a national Bank Holiday. Let’s make it happen!’ 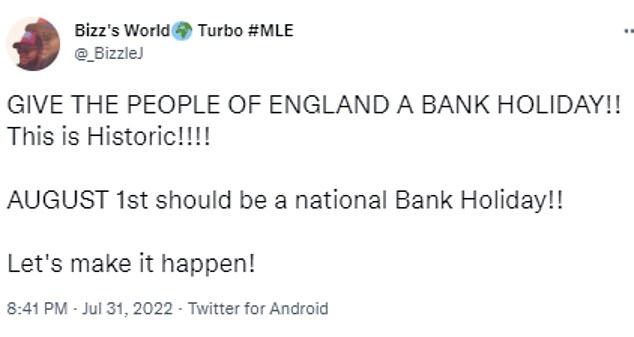 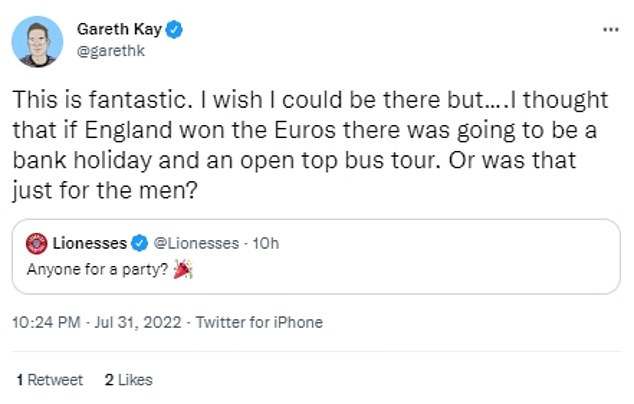 Another wrote: ‘Well done England women. At least you got it home…! Can we have a bank holiday now..?

‘My warmest congratulations, and those of my family, go to you all on winning the European Women’s Football Championships.

It is a significant achievement for the entire team, including your support staff.

The Championships and your performance in them have rightly won praise.

However, your success goes far beyond the trophy you have so deservedly earned.

You have all set an example that will be an inspiration for girls and women today, and for future generations.

It is my hope that you will be as proud of the impact you have had on your sport as you are of the result today.’

One Twitter user added: ‘This is fantastic. I wish I could be there but… I thought that if England won the Euros there was going to be a bank holiday and an open top bus tour. Or was that just for the men?’

Others joked that the Bank Holiday should be exclusively for women, and former England-striker-turned-pundit Ian Wright – who has passionately backed the women’s game while presenting the tournament.

One Twitter user wrote: ‘I demand a Bank Holiday for all women. And Ian Wright.’

Speaking about the possibility of a Bank Holiday, a UK Government spokesperson said ahead of the final: ‘The Lionesses have done England proud with their fantastic run to the Euro 2022 final.

As many as 15million watched the Lioness roar to victory on television last night – another record for women’s football – including Prime Minister Boris Johnson and his children Wilf, two, and seven-month-old Romy.

The Queen led the praise, telling them in a statement ‘You have all set an example that will be an inspiration for girls and women today, and for future generations’.

The result sent the Lionesses into raptures, with the victorious women storming into Sarina Wiegman’s post-match press conference singing the Baddiel, Skinner and The Lightning Seeds anthem Three Lions. 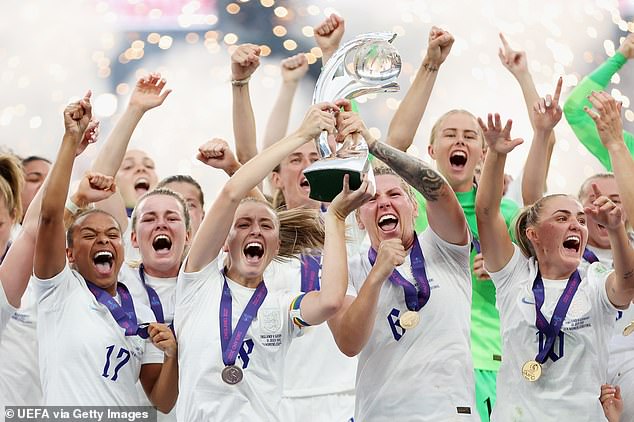 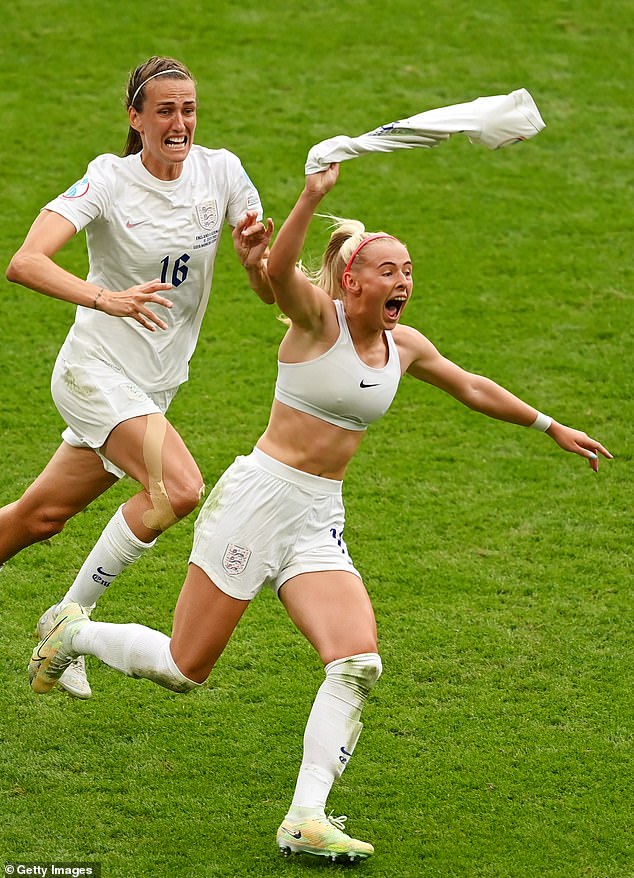 In an image that will live long in the memory, Chloe Kelly swings her shirt over her head after scoring the winning goal and securing the title 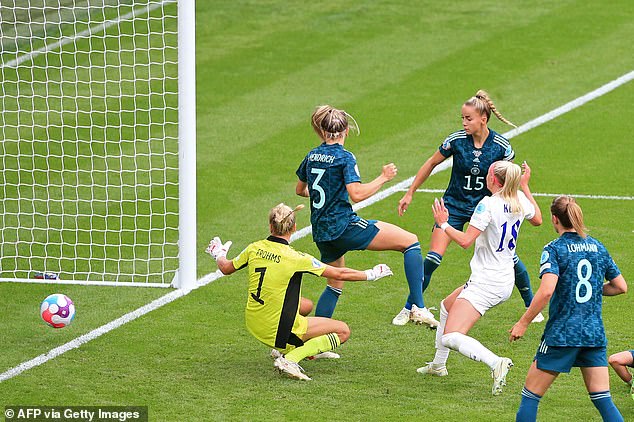 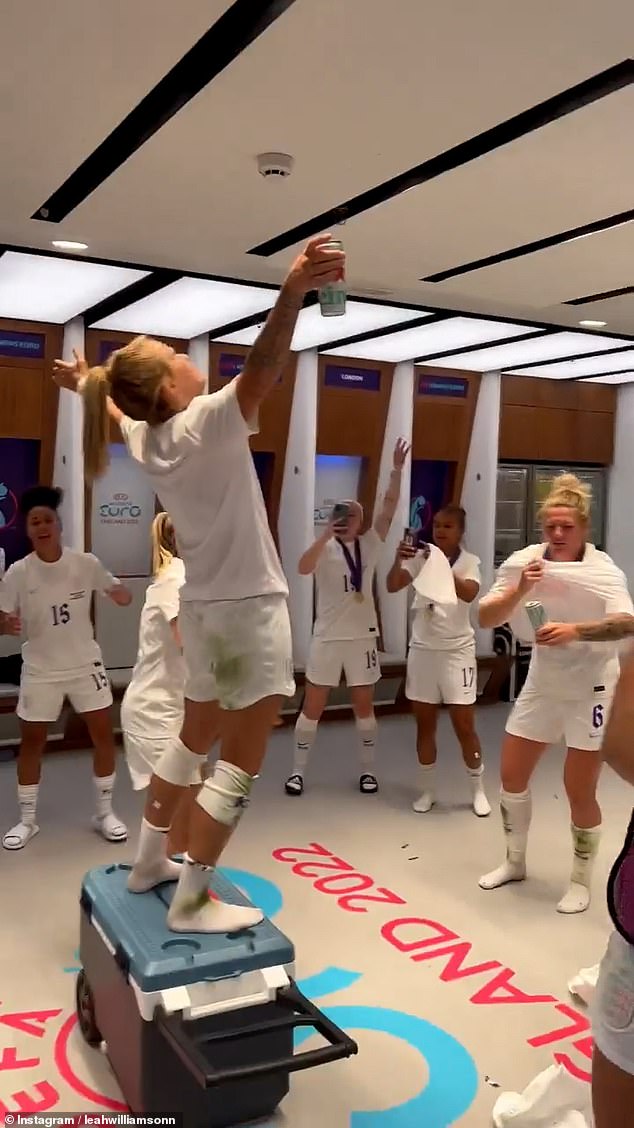 The celebrations continued in the Wembley changing room as the players were seen dancing and laughing – enjoying their historic achievement.

Yesterday’s final was a tense 90 minutes with flying tackles and yellow cards peppering a highly-energetic match, watched by Prince William in the crowd.

But the introduction of Ella Toone looked to have settled it after she broke to fizz a shot past helpless German keeper Merle Frohms watched by a record 87,192 in the stadium.

But there was heartbreak minutes later as Magull worked her way into position to equalise, devastating England fans across the country.

With only ten minutes left, the game was left balancing on a knife edge with the ultimate prize at stake.

PIERS MORGAN: Time’s Person of the Year Elon Musk is doing more to save world than all his critics

‘I would take bullet for Putin’: Bernie Ecclestone says Russian president is a ‘first class person’