Distinguished economist and New York Times opinion writer Paul Krugman has been ruthlessly criticized for what was seen as political pandering after he claimed the US was not in a recession and that the term ‘didn’t matter’ in a CNN interview Sunday.

Krugman, 69, appeared on the network’s Reliable Sources talk show to discuss the state of the American economy, and was asked almost immediately by host Brian Stelter: ‘Are we in a recession and does the term matter?’

‘No we aren’t, and no it doesn’t,’ Krugman responded curtly. ‘None of the usual criteria that real experts use says we’re in a recession right now. And what does it matter?

‘You know, the state of the economy is what it is.’

The vapid and vague response prompted a hail of criticism, particularly as it transpired late last week that US GDP shrank for the second quarter in a row – a popular marker of recession.

A recession is defined as a ‘widespread and prolonged downturn in economic activity’, and was described in 2000 by former president Bill Clinton as ‘two quarters in a row of negative growth’.

The Biden administration meanwhile has refused to acknowledge the markers of recession, and Krugman has been called out as a Democrat shill, having frequently used his New York Times opinion column to rail against Republican lawmakers and policies.

Democrat president Joe Biden and his officials point to metrics like record job growth and steady levels of consumer spending to argue that the country is not yet in a recession.

But with inflation at the highest rate in 40 years, the Federal Reserve pumping up interest rates to compensate and the US housing market rapidly slowing after a two-year boom, Biden’s approval ratings have sunk to an all time low.

It comes as a CBS News/YouGov Battleground Tracker survey released Sunday suggested that the state of the economy is American voters’ chief point of concern ahead of November midterm elections. 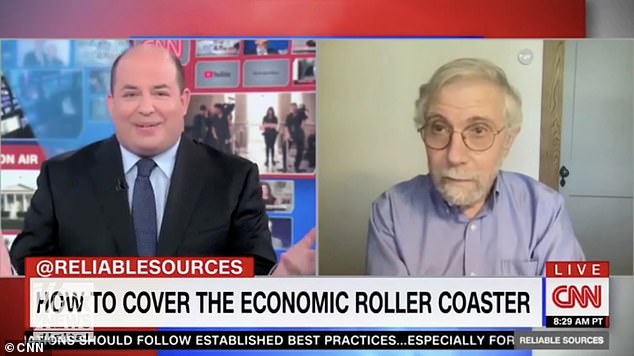 Krugman, 69 (right), appeared on the network’s Reliable Sources talk show to discuss the state of the American economy, and was asked almost immediately by host Brian Stelter (left): ‘Are we in a recession and does the term matter? 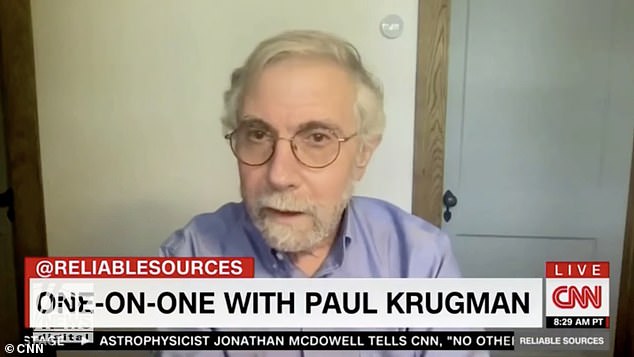 ‘No we aren’t, and no it doesn’t,’ Krugman responded curtly. ‘None of the usual criteria that real experts use says we’re in a recession right now. And what does it matter?’ 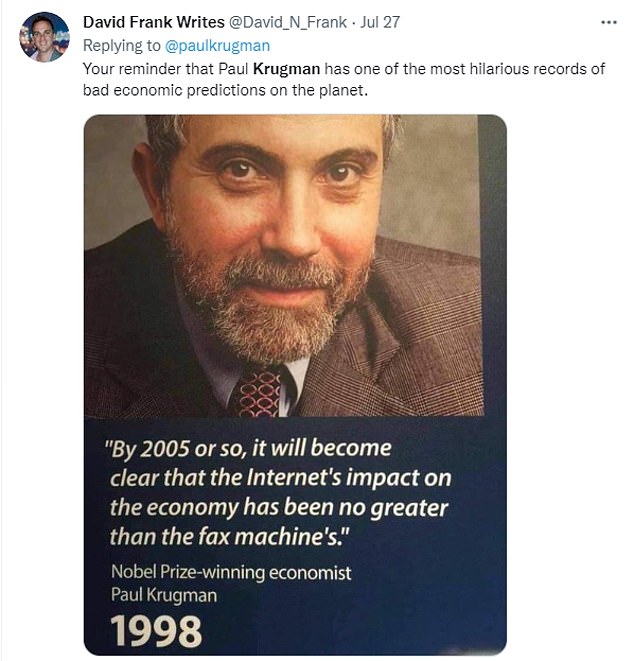 Krugman’s comments on CNN prompted a storm of dissent on social media from high-profile figures including fellow economists, journalists and politicians

Krugman, a world-renowned economist who previously lectured at MIT and Princeton University, earned a Nobel Memorial Prize in economic sciences in 2008 for his contribution to the evolution of international trade theories.

He has however long carried a reputation of being overconfident in his economic and social predictions – many of which have proven to be wholly incorrect – and is often slated for parroting economic rhetoric in line with the Democratic party, whose candidates he has previously endorsed.

His comments on CNN prompted a storm of dissent on social media from high-profile figures including fellow economists, journalists and politicians.

Journalist Glen Greenwald took aim at Krugman’s seemingly obvious political affiliations and accused CNN and the economist of protecting Biden’s administration, adding their blatant toeing of the party line ‘is a new level of audacity no matter how low your opinion of them already is.’

Managing Director of investment firm Thiel Capital and mathematical physicist Eric Weinstein meanwhile tweeted: ‘Have you dealt w/ economics professionally as an academic from another field? If not, it’s exactly like this: ‘Reason, fact, analysis, total bullshit, fact, a lie, fact.”

‘I’m having deja vu watching Mr. ”I was wrong about inflation” dismiss the recession. Krugman is perhaps the most intellectually dishonest ”real expert” out there. Of course corporate media continues to give him a platform to spread misinformation,’ he wrote.

Biden on Thursday tried to soothe Americans’ worries about the strength of the economy after data revealed it had contracted for two quarters in a row.

Top White House officials said that employers are still hiring, unemployment is at 50-year lows and manufacturers are still investing, leading Biden to conclude: ‘That doesn’t sound like a recession to me.’

But the president has faced criticism from both sides of the aisle for being slow to react to Americans’ growing financial burdens, and multiple surveys have shown US voters feel that the president is disconnected from their struggles.

A recent CNN poll found that just 30 percent of Americans approve of how he’s handling the economy and nearly 7 in 10 don’t think the president has paid attention to the country’s worst issues.

The economy overall is voters’ top issue going into the midterms, while inflation is a close second, according to a CBS News/YouGov Battleground Tracker survey released Sunday.

Only 5 percent of voters say that inflation is not important to them when casting their ballot.

Spies have made more than 10,000 ‘disguised approaches’ to Government officials, head of MI5 warns

Coach driver, 27, who smashed into central reservation because he was DANCING is banned from road