The Northern Territory has detected 11 new Covid infections as an outbreak in the Top End’s Indigenous community continues to grow.

It brings the cluster to 51 cases with five people from Binjari Aboriginal community and two residents from Robinson River testing positive.

Three children from the town of Katherine and their father were also diagnosed with the virus. 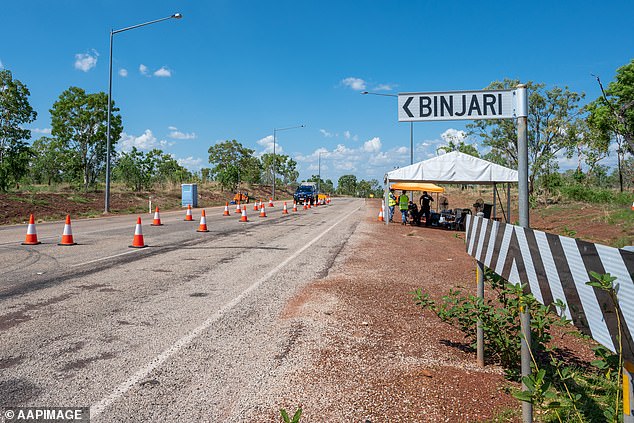 Chief Minister Michael Gunner says one of the cases, an infected Binjari woman, evaded police and left the locked down community on Tuesday night.

She travelled to Katherine with three other people in a taxi before being located at a gathering of 11 people on Wednesday morning.

‘The woman did not know she had Covid-19,’ Mr Gunner told reporters.

‘She was at large in Katherine and she was infectious.’

Katherine is also locked down and the group has now been transferred to The Centre of National Resilience quarantine facility.

‘Acting illegally to evade the hard lockdown is so dangerous,’ Mr Gunner.

Wastewater testing in and around Katherine continues to yield positive results but Mr Gunner says the level of virus is weakening.

‘It is very encouraging,’ he said.

Meanwhile, the ADF has lent more personnel to the NT’s Covid-19 fighting efforts, with a 125 members now helping to stop the spread of the virus.

About 20 ADF personnel have been brought to Katherine, 320km south of Darwin, to support a testing and vaccination blitz.

They’re assisting health workers transport members of the Indigenous community to and from testing clinics.

Another 40 military personnel are also helping deliver food to vulnerable Indigenous communities under extreme lockdowns that prevent them from leaving their homes to buy food.

The ADF is also manning three vehicle checkpoints around Katherine, with 20 members assisting police at the Tindal, Edith Falls and Binjari turn-offs.

‘We’re very appreciative of the support and it will certainly make our ability to respond more broadly to ensuring people are compliant in the Katherine area,’ Police Commissioner and Territory Controller Jamie Chalker has said

Greater Katherine remains locked down, with authorities saying it’s likely to have some form of lockdown or lockout until December 4.

That may be lifted once it reaches the 80 per cent fully vaccinated rate.

The town’s current first dose rate is 83 per cent, with 77 per cent of people fully vaccinated.

The outbreak started when an infected woman illegally entered the NT in late October.

The 21-year-old lied on her border entry form before travelling from Cairns to Darwin after visiting Victoria, where she contracted the virus.

She infected a man in Darwin before the virus spread to Katherine, then the Aboriginal communities of Robinson River and Binjari.

The majority of those infected are Indigenous Territorians.

The communities’ 300 residents are only allowed to leave their homes in an emergency or for medical treatment.

All residents in the two communities have now had at least one jab.

Restrictions have eased at Robinson River, 1,000km southeast of Darwin, in recent days, with the lockdown downgraded to a lockout of unvaccinated people.

The US millionaire who has Britain over a barrel of CO2