She reached her milestone birthday in January but postponed any formal celebrations due to the pandemic.

Scandinavia required all non-residents to present a negative Covid-19 test upon arrival at the border from December to January 17 this year, when Omicron was peaking. 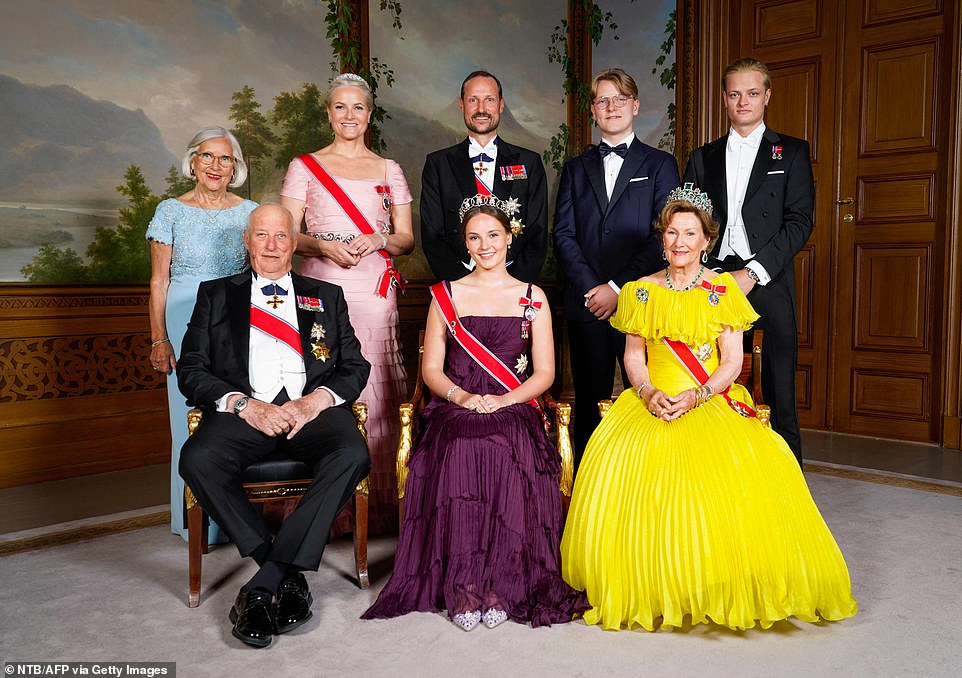 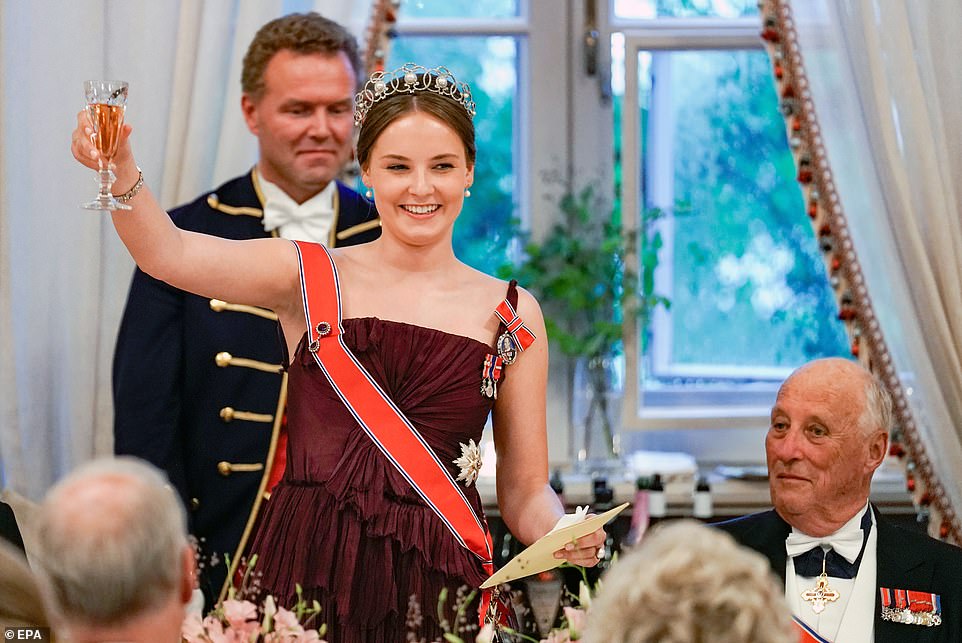 The Princess oozed elegance in a burgundy floor length gown adorned in medals, a stunning tiara and lilac heels.

She arrived at her birthday gala alongside her parents Crown Prince Haakon of Norway and his wife Mette-Marit, as well as her grandparents Queen Sonja and King Harald.

Princess Ingrid Alexandra joined her grandfather, reigning King Harald V, for a cabinet meeting at the Royal Palace to mark her coming of age.

In the next few years, Ingrid Alexandra will increase her public profile and take on more responsibilities on behalf of the royal family but will continue to focus on her education, the palace said in a statement.

Crown Prince Haakon secured her place in the line of succession by changing the law to allow first-born daughters to ascend the throne over their younger male siblings. Her birthday means that, if required, she can now act as Regent of Norway. 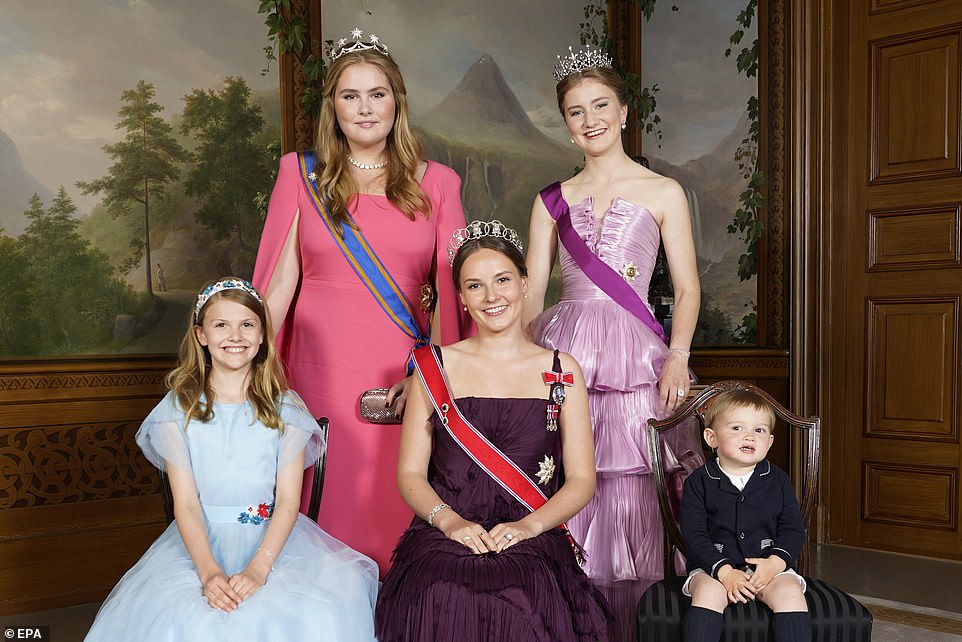 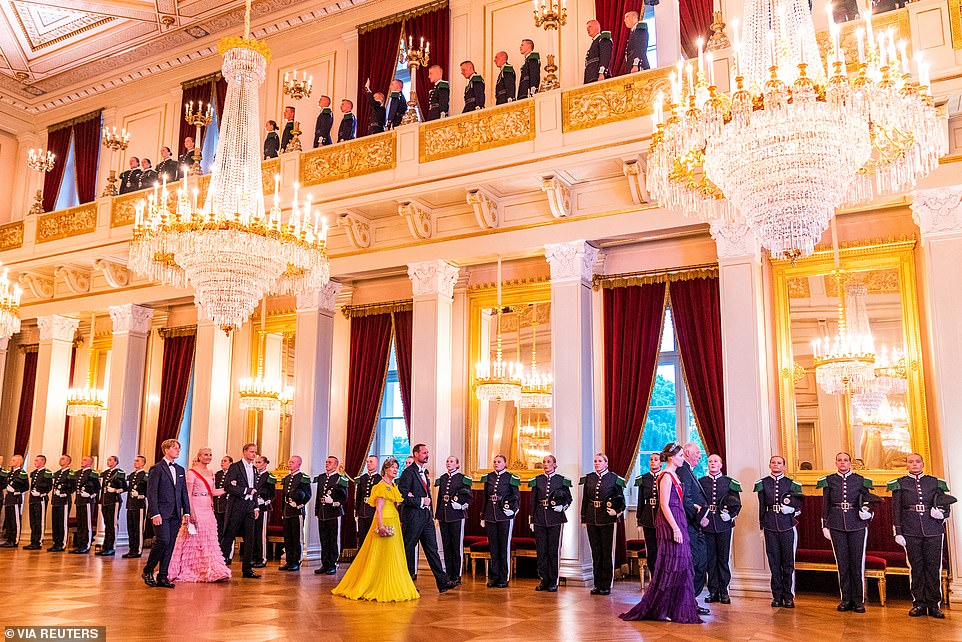 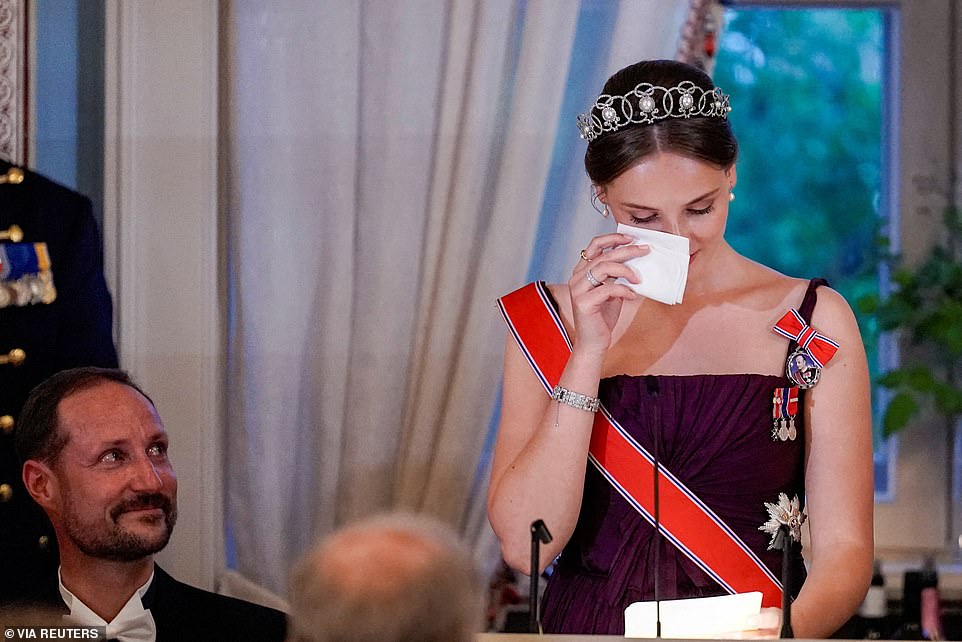 Princess Ingrid Alexandra joined her grandfather, King Harald V, for a cabinet meeting at the Royal Palace to mark her coming of age as she takes on new responsibilities as an adult

Haakon, 48, ascended the throne ahead of his older sister Princess Märtha Louise, who is now engaged to Durek, 47, having been with her partner since 2019.

Princess Märtha Louise 50, who is fourth in line to the Norwegian throne, and her fiance Shaman Durek were amongst the birthday guests in attendance.

The mother-of-three shared her official engagement photo on her Instagram account last week – where she showcased a dazzling emerald ring.

Also in attendance were Crown Princess Victoria of Sweden, Ingrid Alexandra’s other godmothers including her Highness Princess Märtha Louise, and Ms Marit Tjessem, the mother of the Crown Princess.

King Felipe VI and King Harald – as well as the Queen and Queen Margrethe II of Denmark are all descended from Queen Victoria and King Christian IX, which is why the Spanish King was chosen as one of the teenage princess’s godparent. 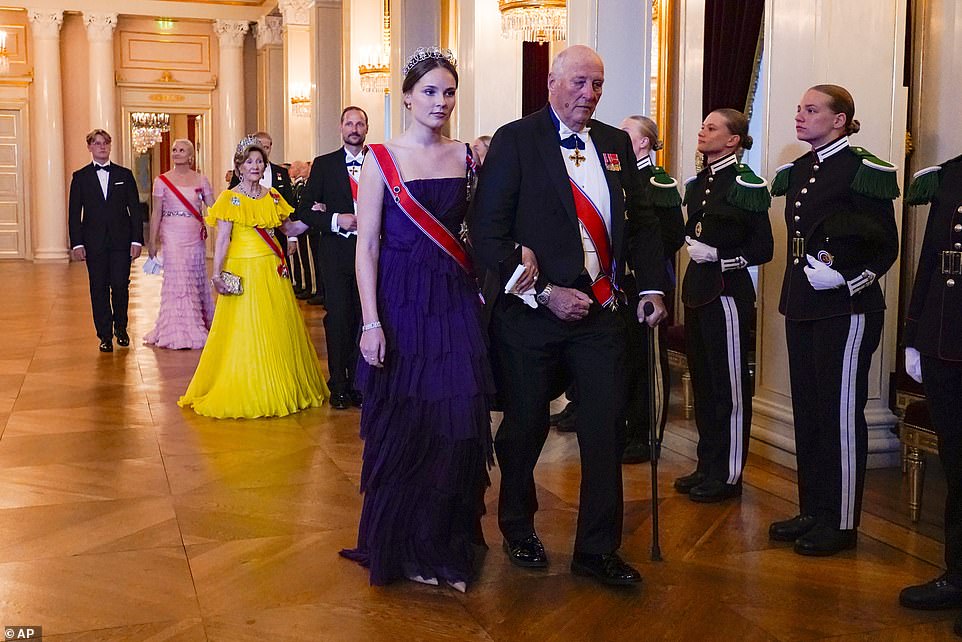 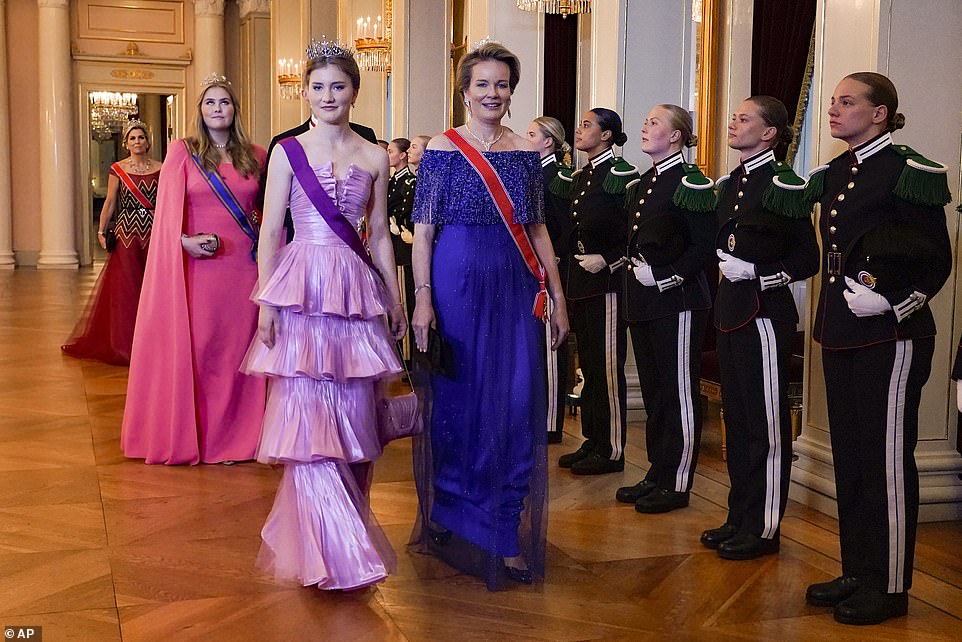 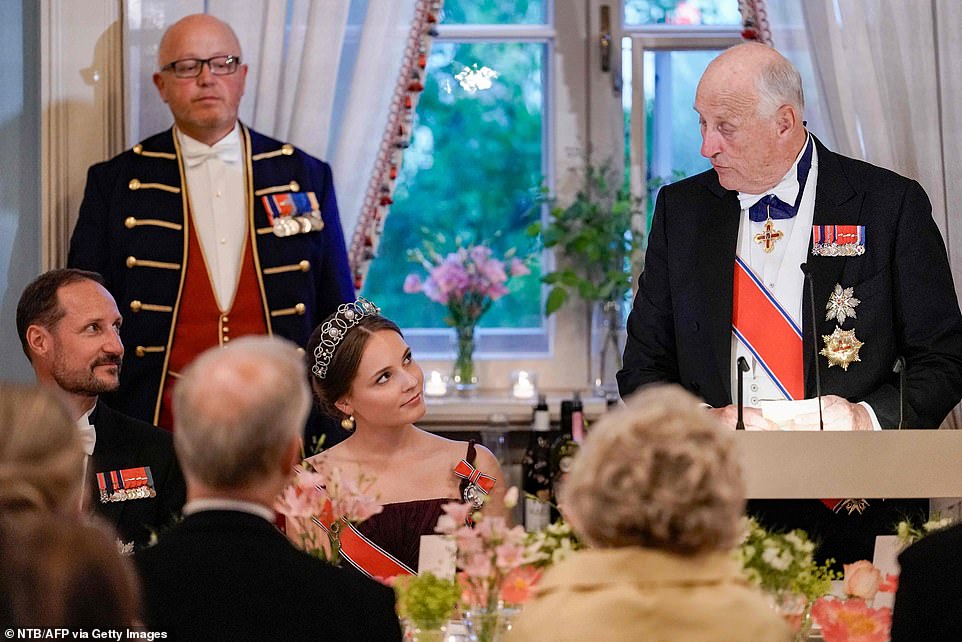 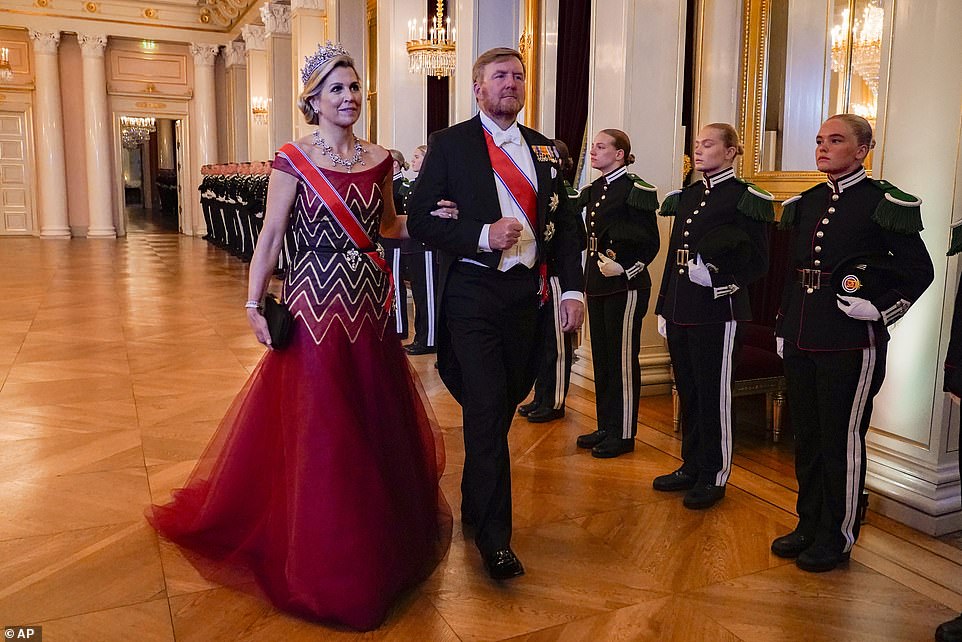 Meanwhile, Ingrid Alexandra’s grandfather, King Harald, is also first cousin to Queen Margrethe of Sweden, and Crown Princess Victoria is her cousin twice removed, earning herself another spot on the list of Ingrid Alexandra’s royal godparents.

Ingrid Alexandra will become Norway’s first female monarch in 600 years when she ascends the throne after her father, 48.

Gert’s Royals, a Royal blog, confirmed that Queen Maxima and King Willem-Alexander of the Netherlands were one of the first royals to RSVP to the event, alongside their daughter Princess Amalia, also 18.

in letters written to the Princess from her mother  Crown Princess Mette-Marit and father Crown Prince Haakon praised her and assured her of her new responsibilities. 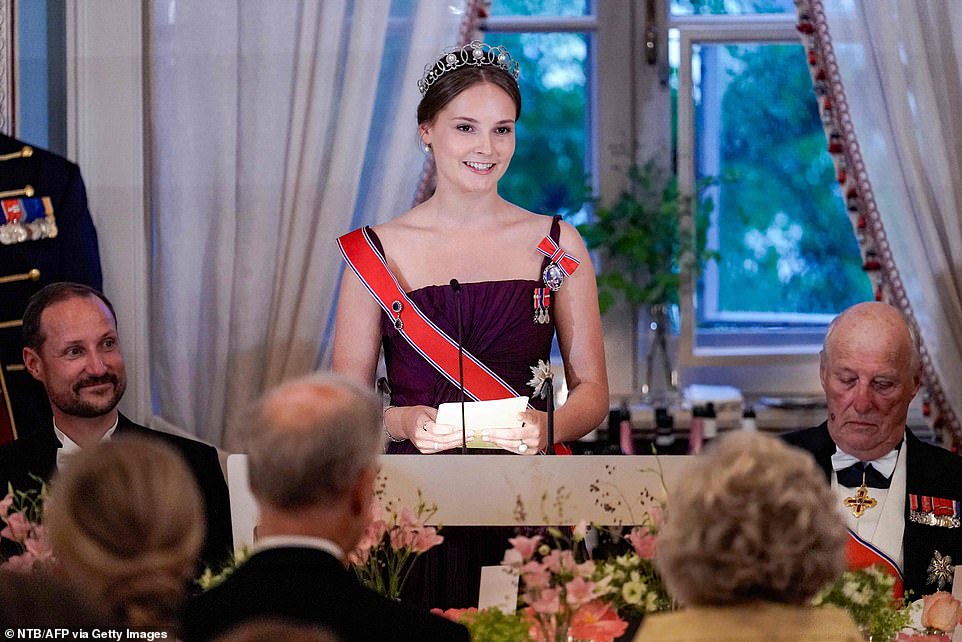 Her mother Crown Princess Mette-Marit wrote: ‘Ingrid, I could not be more proud of the girl I have been privileged to follow since the first time your clear brown eyes peered up at me after you came into the world.’ 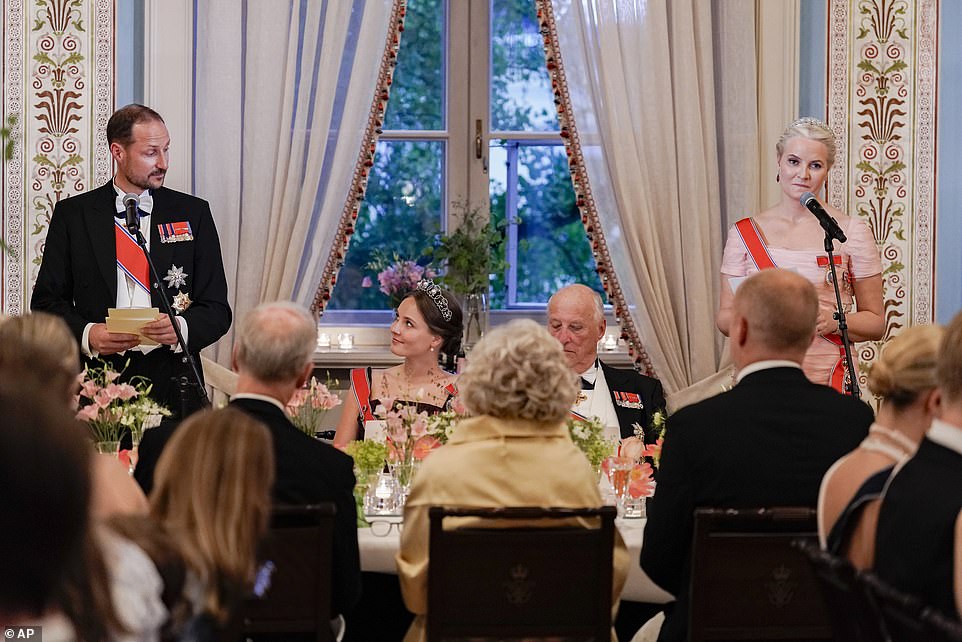 Crown Prince Hakon said: ‘Berit’s husband Bjørn has talked to me a number of times about duty as a value, as a positive force. I am not certain whether it was something he mostly said to me or whether he talked to others about it as well. It is fully possible to find freedom even in doing one’s duty. ‘

Crown Princess Mette-Marit wrote: ‘Those of us who know you know how much you love your country. How greatly you enjoy travelling to different parts of Norway. About how extra proud you feel wearing your sweater with NOREG printed on it.

‘Dearest daughter, you are not the only one who is turning 18 this year. So are 57 000 other young people throughout Norway

‘More people got to know you a little better in connection with your birthday in January. You gave your first interviews, had meetings with the branches of the government and received various deputations here at the Palace.

‘All of this has conjured up a lot of memories for me. Because I have been in the same situation as you, and I found myself contemplating myself as an 18-year-old.

One boy to be DUMPED from the villa after the arrival of bombshell Danica....

Brooklyn girl, 9, is found dead in with trauma to her head and bite marks to her back