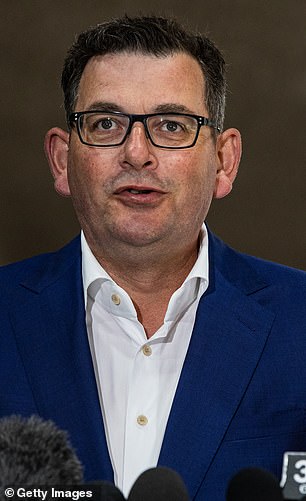 Daniel Andrews has taken a swing at Novak Djokovic during his daily Covid press conference – quoting the Serbian tennis superstar’s arch-rival in the process.

The Victorian Premier was asked on Thursday about Djokovic’s ongoing visa battle with the federal government which could see him deported as early as today – just four days out from the start of the Australian Open.

Mr Andrews said while he isn’t involved in the process surrounding the visa debacle, he had some advice for the 20-time grand slam champion.

‘Just get vaccinated. That is the key, that’s it,’ he said.

‘Rafa (Rafael Nadal) could not have put it any better. Just get vaccinated.’

The world No.1’s hopes of taking part in the Melbourne tournament are hanging by a thread as more questions are raised about his visa application and vaccine exemption.

The Federal Government is expected to announce on Thursday whether it will launch a renewed bid to deport the winner of 20 Grand Slams. Of most concern to Australian officials is Djokovic’s admitted breach of Serbia’s isolation rules after learning he had tested positive. 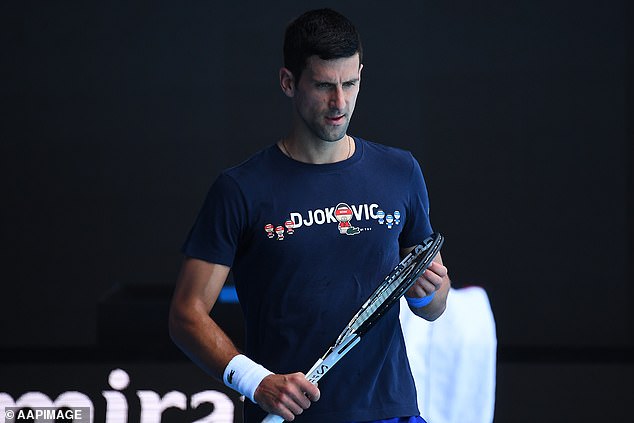 Daniel Andrews took a subtle swip at Novak Djokovic during his daily Covid press conference on Thursday, quoting the Serbian’s arch-rival Rafael Nadal in the process

Nadal, Djokovic’s sternest rival both for both the Australian Open and the grand slam record took aim at the Serbian last week saying his decisions had consequences.

The Spaniard said he empathised with the situation of Aussies constantly being locked down throughout the pandemic and said Djokovic could have easily entered the country if he had simply gotten the jab.

‘It’s normal that the people here in Australia gets very frustrated with the case, because they have been going through a lot of very hard lockdowns… A lot of people were not able to come back home,’ Nadal told reporters.

‘The only for me clear thing is if you are vaccinated, you can play in the Australian Open and everywhere, and the world in my opinion have been suffering enough to not follow the rules. 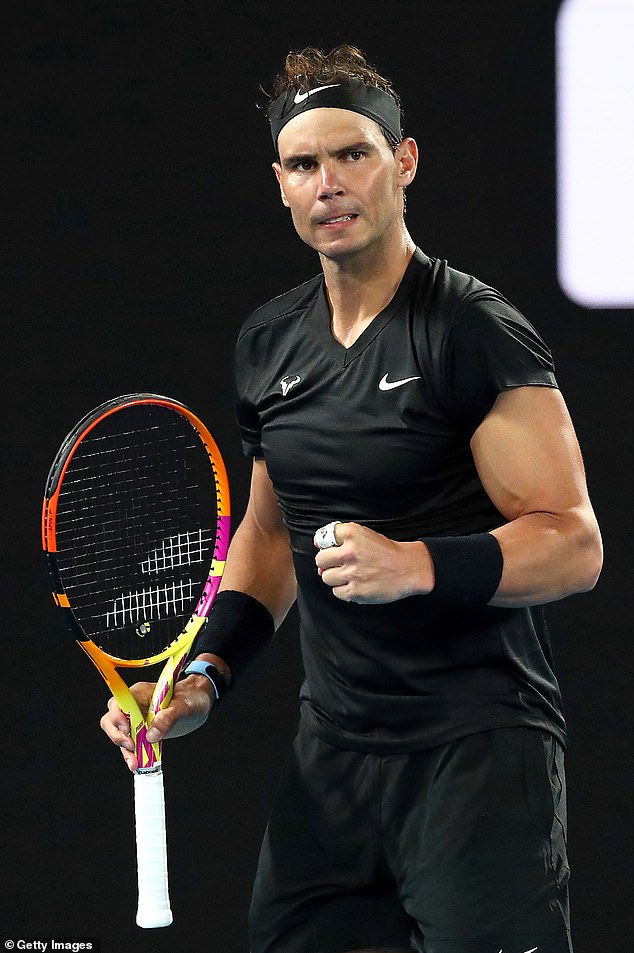 ‘I went through the COVID, I have been vaccinated twice. And if you do this, you don’t have any problem to play here. That’s the only clear thing.’

Without wanting to be drawn in on a personal attack on Djokovic, the world no.6 said the Serbian ‘should have known better’ than to travel to Australia without a valid exemption.

‘I think if he wanted, he would be playing here in Australia without a problem… He made his own decisions, and everybody is free to take their own decisions, but there are some consequences,’ Nadal said.

‘Of course I don’t like the situation that is happening. In some way I feel sorry for him. But at the same time, he knew the conditions since a lot of months ago, so he makes his own decisions.’

Mr Andrews said Djokovic needed to drop his ego and make the commitment towards helping others by getting the jab.

‘Just like the safety of our community is bigger than any one person. ‘ 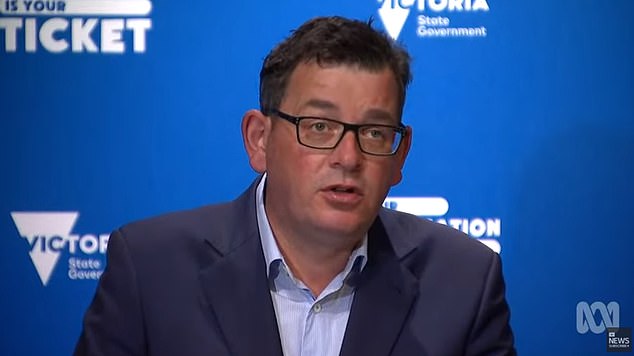 Border Force investigators are concerned about the false information Djokovic provided on his travel entry form, which incorrectly told Border Force he had not travelled in the past 14 days despite visiting Spain.

Djokovic on Wednesday admitted to doing an interview and photo shoot with a French newspaper while infected with Covid last month, and blamed his agent for the ‘administrative error’ on his travel entry form.

Lingering mystery also surrounds when Djokovic actually learned he had Covid with a German publication sowing doubt on the timing of his PCR test after QR Code information was uncovered that ‘did not match up’.

While this could be a quirk of Serbia’s reporting system, it has cast doubts on Djokovic’s claims he tested positive on December 16.

The 34-year-old disclosed he had attended an event with children in Belgrade the next day while he was Covid positive, but said he didn’t know he was infected until afterwards.

Sources have told the Herald Sun senior Morrison Government figures believe they should fight for the integrity of Australia’s border policy, regardless of the chances of being successful.

They added the Government is prepared to cop a global backlash as deporting Djokovic would be consistent with ‘ongoing efforts to control the spread of Covid’.

The penalty for giving false evidence under the Crimes Act is a five-year jail term. 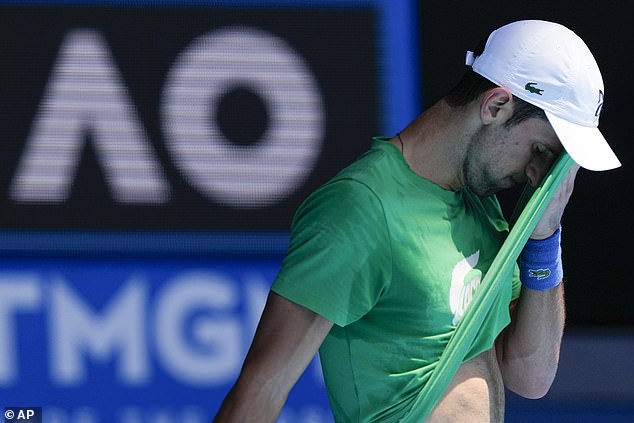 Border Force investigators are concerned about the false information Djokovic provided on his travel entry form, which incorrectly told Border Force he had not travelled in the past 14 days despite visiting Spain

The Victorian Premier announced a string of tough new restrictions on the state on Thursday, but also released tens of thousands of critical workers from isolation rules.

The state recorded 37,169 new cases and 25 deaths on Thursday, with hospitalisations at a record high of 953, a slight increase from the 946 a day ago. Some 111 people are in intensive care after contracting the virus.

From midnight, Mr Andrews announced a series of changes to Covid restrictions which were labelled a ‘soft lockdown’ by the Opposition.

The new restrictions will see indoor dance floors at hospitality and entertainment venues closed – except for weddings.

Hospital visitors will be barred from entry without being vaccinated or returning negative rapid antigen test results, with unvaccinated visitors ordered to wear N95 masks.

Aged care residents will be barred from having any more than five visits per day, with all visitors required to return negative RAT results. 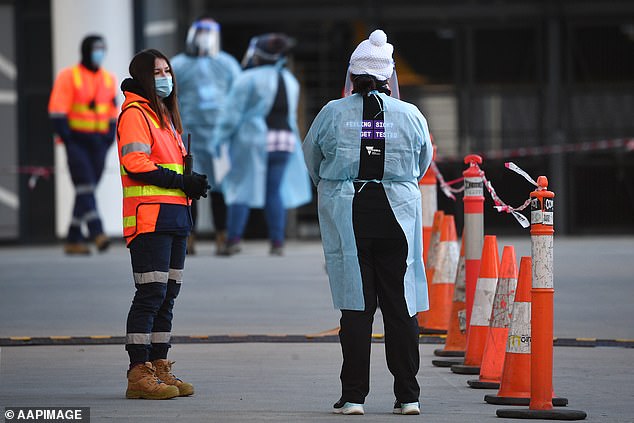 Workers in emergency services, education, critical utilities, transport and freight will join the food sector in being exempt from isolation requirements (pictured, a traffic controller) 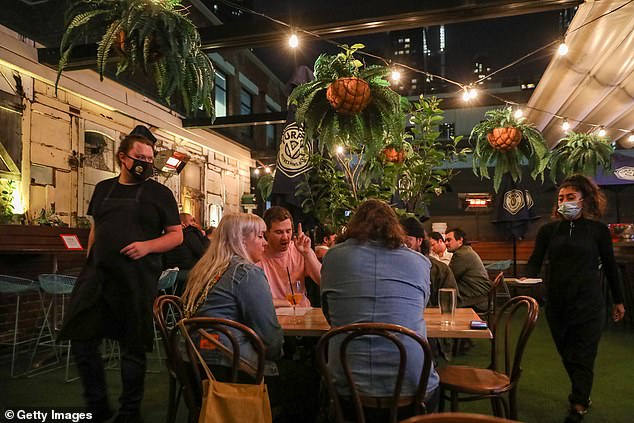 new restrictions will see indoor dance-floors at hospitality and entertainment venues will be closed – except for weddings (pictured, patrons at a bar in Melbourne)

Amid a national supply chain crisis causing empty shelves at supermarkets, Mr Andrews had earlier this week eased rules for grocery store workers and essential employees involved in the manufacture, distribution or packaging of food.

The workers will no longer need to isolate if they are designated as a close contact as long as they are asymptomatic, undertake daily rapid antigen tests for five days and return negative results.

The exemption already applies to disability, health and aged care workers, as well as those working in emergency services, corrections, quarantine and food distribution.

In order to be eligible, workers must tell their employer they are a close contact with both parties required to consent to the worker returning to the workplace.

A face mask must be worn at all times – preferably a N95 mask – with meal breaks to be separated, and no mingling in the wider workforce or car-pooling arrangements.

If at any time the worker develops symptoms or tests positive on a RAT, the exemption no longer applies.

The employee is then considered a confirmed Covid case and must isolate for 7 days and notify others including their employer. 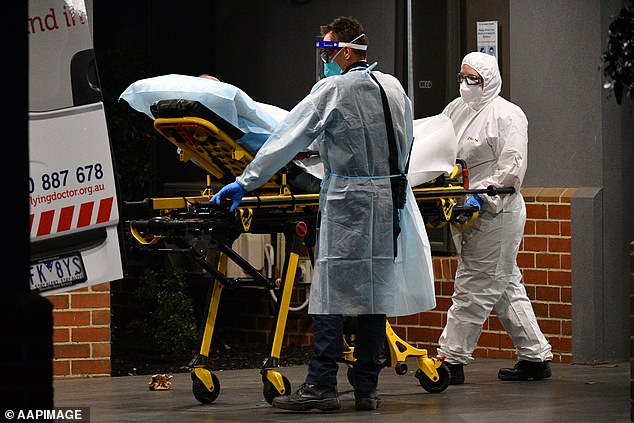 The exemption from close contact isolation already applies to disability, health and aged care workers, and those in emergency services, corrections, quarantine and food distribution

Employees in emergency services, education, transport, freight, custodial facilities and critical utilities will be eligible to return to work even if they live with a positive case, with tough measures to apply.

– Workers must take a rapid test for five days prior to their return and every day before attending the workplace.

– Workers must wear a face mask at all time – preferably a N-95 mask – other than when eating and drinking.

– To be eligible workers must asymptomatic and fully vaccinated, with both the employee and the employer consenting to their return.

– Lunch breaks must be taken in solo areas, with car-pooling arrangements or wider mingling within the workplace not permitted.

– If at any time the worker develops symptoms or tests positive on a RAT, the exemption no longer applies and they must isolate.

– From 11.59pm on Thursday, indoor dance-floors at hospitality and entertainment venues are closed, with the exception of weddings

– Aged care residents can only have five visitors per day, who must also return a negative RAT 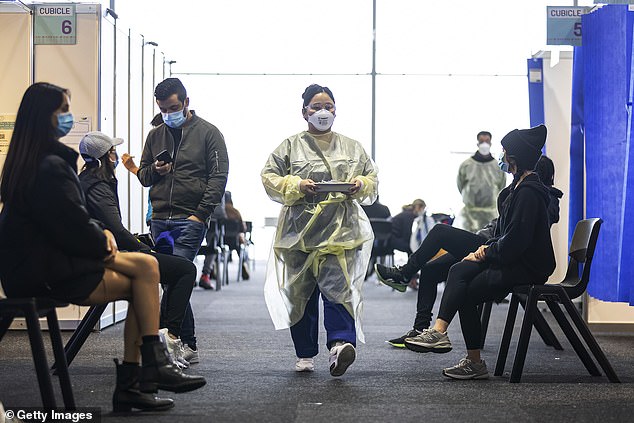 The exemption already applies to disability, health and aged care workers, as well as those working in emergency services, corrections, quarantine and food distribution (pictured, health workers in Melbourne)

The Department of Health has also announced an easing to guidelines on Covid outbreaks on worksites.

If five positive cases have been at a job site within seven days, they must alert the department – previously this was required if just one person tested positive.

However, several Victorians defended the premier and said they welcomed the ‘reasonable’ rules as case numbers continued to explode across the state.

‘Heaps of healthcare workers have been doing this for ages,’ one user said. 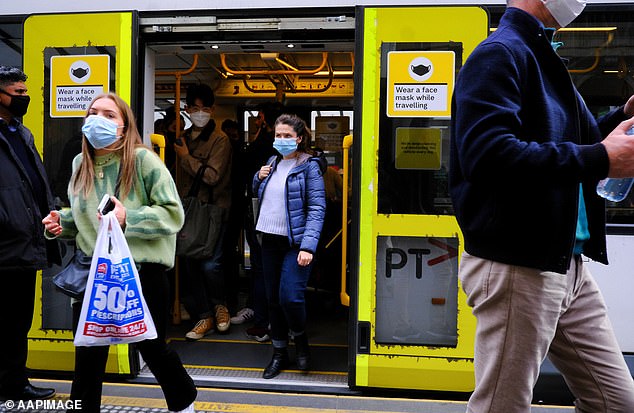 Severa Victorians said they welcomed the ‘reasonable’ rules as case numbers continued to rise while the Opposition labelled the rules ‘a soft lockdown’ (pictured, commuters in Melbourne)

‘Making sensible decisions in the biggest part of the pandemic we’ve seen to keep everyone around you safe is not controversial.’

‘This is about helping Victorians keep food on the table, lights on in the house and staff on in our hospitals,’ the premier said in a statement.

‘It’s safe and sensible in the eyes of our public health team, but to further protect themselves and the community, workers will have to use a rapid antigen test every day and wear a mask at all times.’

‘The worker’s rights are protected, and they can’t be directed to work if they are a contact – the worker has to agree to come in, just as they have to agree to the various preventative measures that will reduce risks for others.’

PETER HITCHENS: Posing in one of our few tanks, Liz Truss, is not the same as being an Iron Lady