A New York woman has pleaded guilty to taking $2 million of money meant for a homeless shelter she ran in the Bronx and spending it on shopping sprees at luxury stores in the city.

Ethel Denise Perry, 66, was the executive director of Millennium Care, which was given a $10 million contract by the City of New York to run a 100-person shelter.

Yet between 2013 and 2016, Perry used Millennium Care ‘as her own personal piggy bank’, according to the state’s attorney general, Letitia James.

James said Perry illegally took more than $2 million from Millennium Care for luxury shopping sprees at retailers such as Tiffany & Co, Manolo Blahnik, Ferragamo and Bergdorf Goodman, and to pay for her cars, gym membership, and other personal expenses.

‘Stealing money that is earmarked for people experiencing homelessness is as immoral as it is illegal,’ said James. 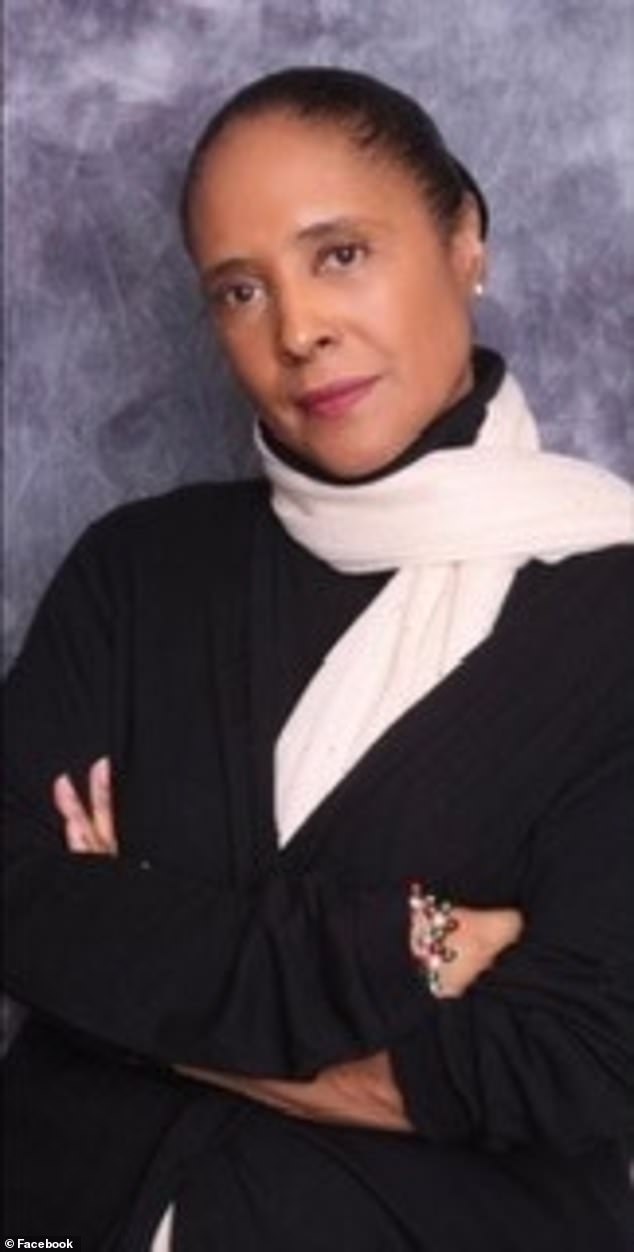 Ethel Denise Parry, 66, pleaded guilty on Friday to taking millions from the non-profit she ran to provide homeless shelters, and using it on luxury spending sprees 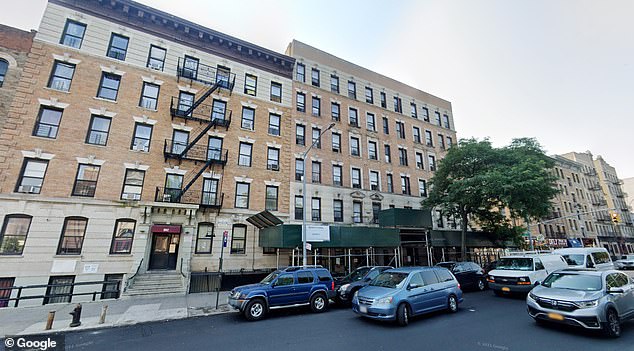 Perry ran a homeless shelter in this building in the Bronx, with room for 100 people

James noted that she had also hired her brother, William Perry, and nephew, Jose Colon, and paid them ‘far in excess of their reported salaries’.

She added: ‘This individual broke the law by failing to pay taxes while taking money from a homeless shelter in order provide a luxurious lifestyle for herself and her family members.

‘Such actions will never be tolerated in New York, and I will continue to do everything within my power to hold those who take advantage of vulnerable communities accountable.’

She took $2,394,169 from Millennium Care beyond her official salary, the New York Times said.

Her felony plea agreement bars her from nonprofit service, and requires her to pay the $1,138,208 that she owes in New York City and state taxes, penalties, and interest during a five-year probation sentence. 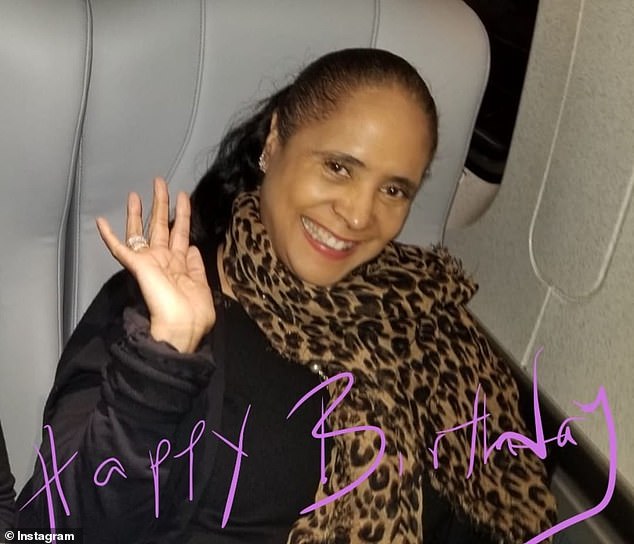 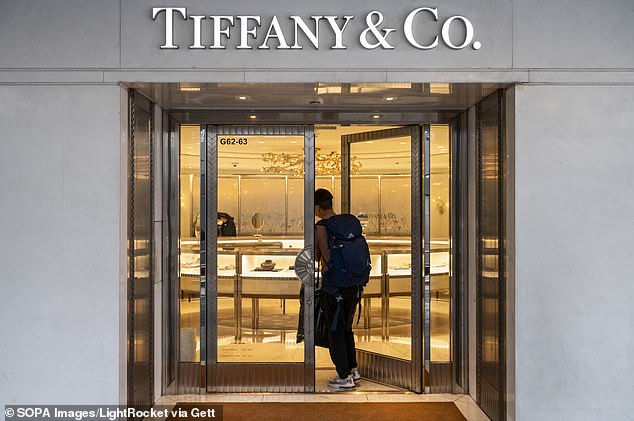 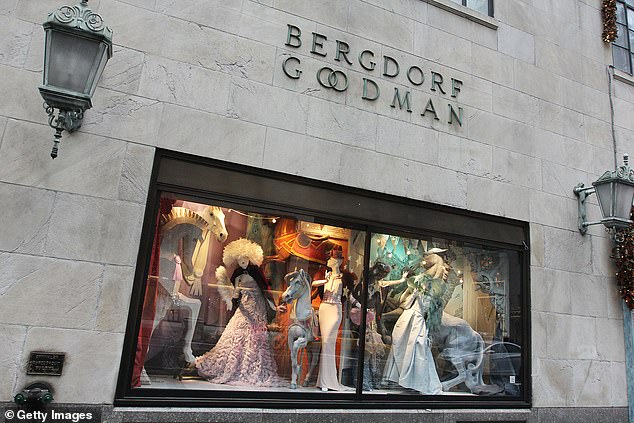 She also splashed out at Bergdorf Goodman, one of Manhattan’s ritziest department stores

Amanda Hiller, the acting commissioner of taxation and finance, condemned Perry’s ‘greed’ and ‘callous’ behavior, and said she gave non-profits a bad name.

‘This is an appalling case of greed and callous disregard for those desperate for help, one that unfairly tarnishes all the charitable organizations throughout New York who do so much good,’ she said.

‘By flouting her tax obligations, the perpetrator also deprived communities of critical funding for other essential public services.’

Perry is also the founder of the Millennium Dance Company – a Bronx-based studio for young people, which she has run since 1994.

In one photo, she is seen with what appears to be a Chanel quilted handbag. 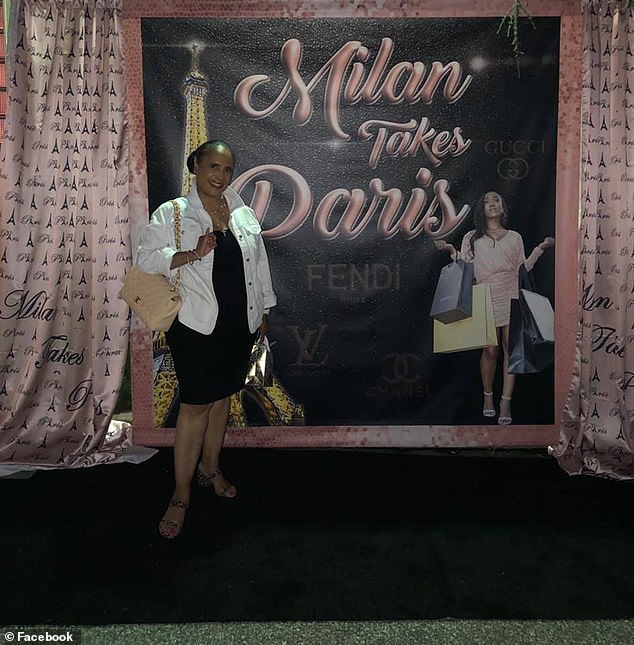 Perry also ran a dance studio, and on the Instagram page of the Bronx-based site posed with what appeared to be a Chanel handbag 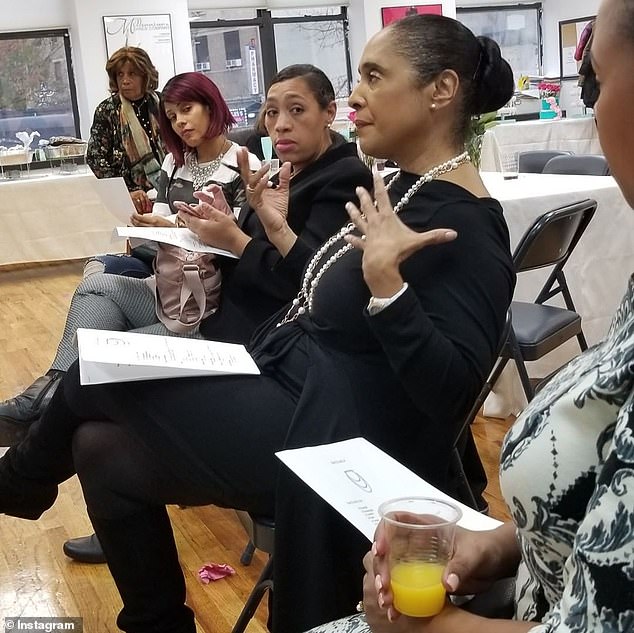 Perry, in pearl necklace and matching earrings, is seen during an event for her dance studio 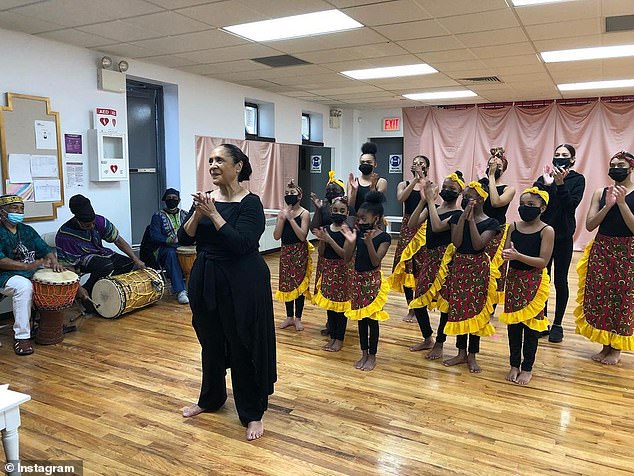 On the website, Perry states that she was ‘personally taught and trained by three legends: Martha Graham, Katherine Dunham, and Alvin Ailey.’

She says that she was the first African American woman to be certified in the Graham Technique.

The site states: ‘Denise has been a teacher, choreographer, and mentor to thousands of young girls and women across multiple generations and continues to inspire and motivate young dancers to become more than they ever thought possible!’

Perry was able to get away with the fraud because the non-profit that operated the shelter had no board of directors and failed to file required financial reports with the state and the IRS.

The non-profit, according to the plea agreement, ‘carried out its business in a persistently illegal manner.’

Frank L. Perrone Jr., Perry’s lawyer, told The New York Times that she had already paid over $200,000 of the back taxes she owed.

He said that only Millennium Care, not Perry, had pleaded guilty to larceny – contradicting the attorney general’s statement.

Perrone is yet to respond to DailyMail.com’s request for comment. 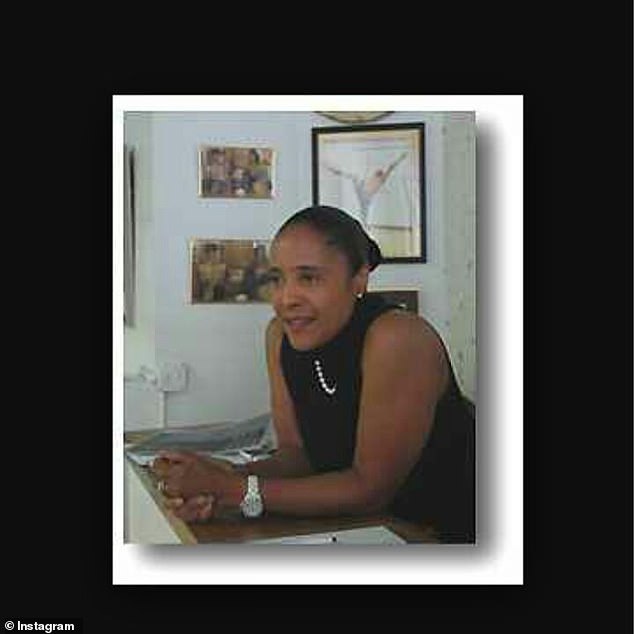 Perry, with a smart watch and elegant jewelry, was noted for her chic scarves and bags 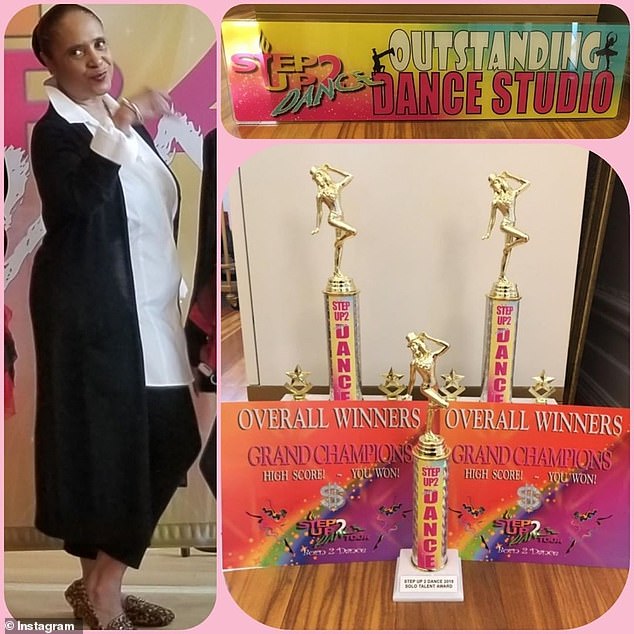 She is just the latest person to run a homeless shelter and be accused of fraud and mismanagement.

The problem has become so serious that the city of New York has ordered an audit of every non-profit that works with homeless people.

So far, nine of the 62 groups that run shelters are on an internal city ‘watch list.’

Meanwhile, homelessness in New York City is at levels not seen since the Great Depression, according to the Coalition for the Homeless.

They reported that, in August 2021, there were 47,916 homeless people, including 14,946 homeless children, sleeping each night in the New York City municipal shelter system.

A near-record 18,236 single adults slept in shelters in August 2021, with the lack of affordable housing being blamed, as well as a lack of access to mental health care.

That works out to about $58,000 for every homeless person – enough to rent each of them an apartment in Hudson Yards. 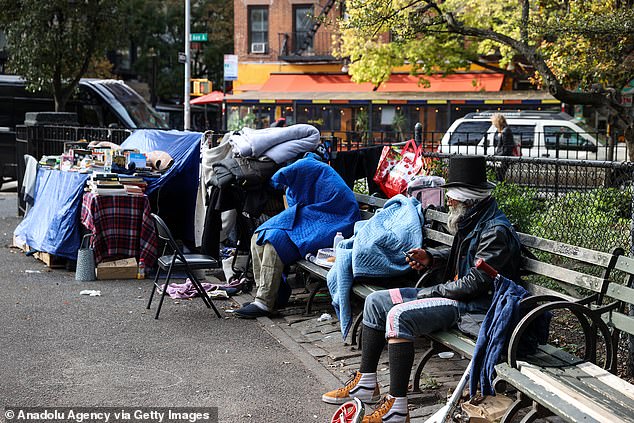 New York City’s homeless problem is reaching historic proportions, with more people homeless than at any time since the Great Depression. Pictured is Tompkins Square Park in the East Village on November 4 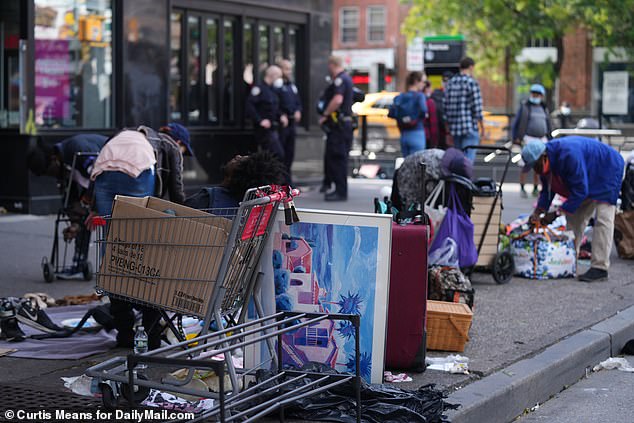 Homeless people are seen in Manhattan. The city spends $3.5 billion on providing services, yet the problem is significant 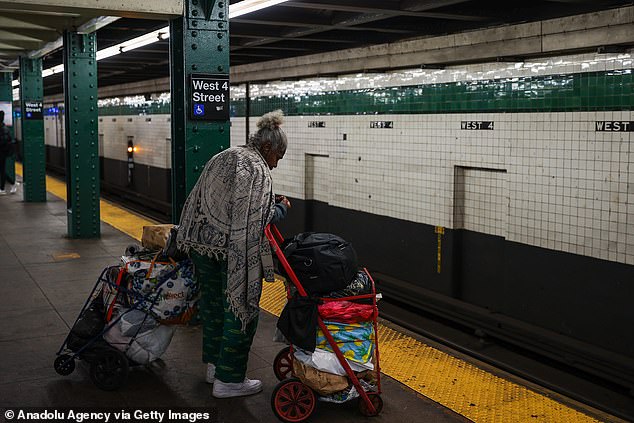 On Monday, the city severed its ties with one shelter provider, CORE Services Group, after a New York Times investigation found that CORE’s chief executive, Jack A. Brown III, steered millions of dollars from the city to for-profit companies he controlled and paid himself more than $1 million a year.

In March, the former head of one of the city’s largest network of shelters, Victor Rivera, was arrested and charged with bribery, accused of pocketing thousands of dollars in kickbacks.

Since 2017, his organization has received $274 million in city funding to run almost 70 sites of homeless housing.

In January 2020, federal prosecutors and the city Department of Investigation raided the offices of Childrens’ Community Services as part of an inquiry into allegations that millions of dollars were siphoned off by executives.