Portland’s open-air drug market is laid bare as people smoke heroin on the streets and needles litter the sidewalks as city officials start homeless sweeps while a nearby city’s mayoral candidate ‘wants to round them up and use ‘Japanese-style pods’ to house them.

New photos show the current desperate situation in Portland, a city that has been plagued with homelessness and addicts openly using drugs in broad daylight.

Discarded needles, human waste and the smell of urine adds another layer of tarnish to city’s progressive policies – one of them being the Ballot Measure 110 decision, which has decriminalized hard drugs in the Democrat-run state.

Oregon was the first state in the United States to decriminalize possession of personal-use amounts of heroin, methamphetamine, LSD, oxycodone and other drugs after voters approved a ballot measure in 2020 to decriminalize hard drugs.

Now, Leslie Wright, who is a retired sergeant major in the U.S. Marine Corps and currently a mayoral candidate for the Portland suburb of Oregon City detailed his plan to use vacant schools for homeless shelters like ‘the Japanese people.’ 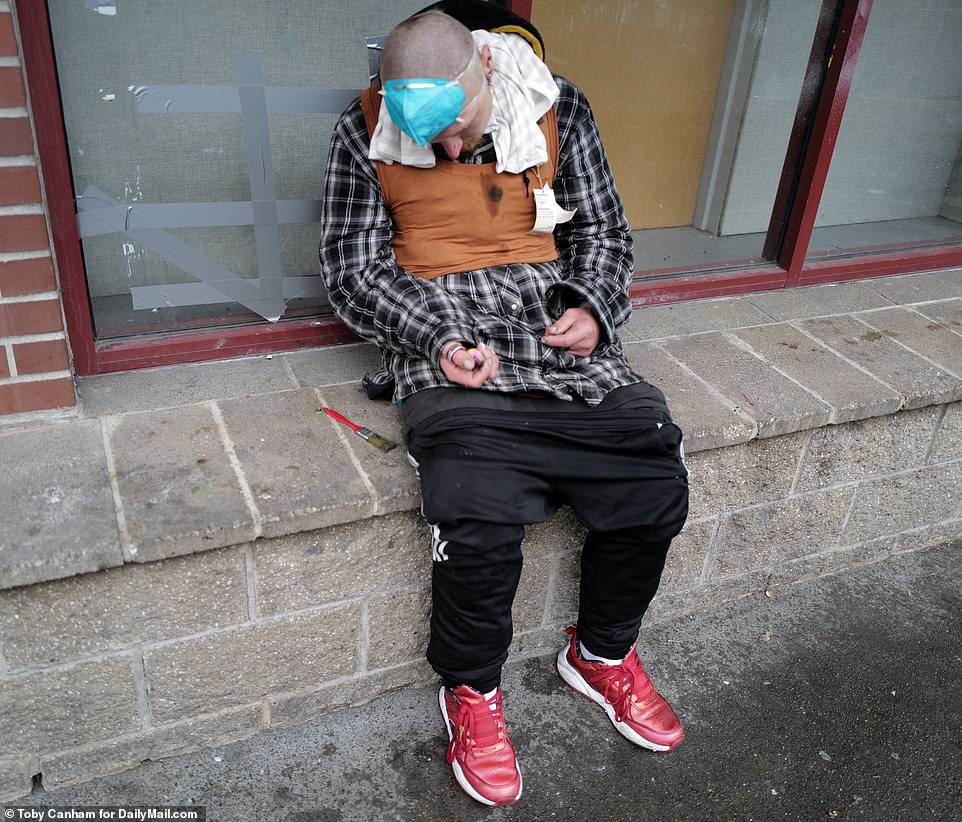 Photos show the current situation in Portland, where homeless people and addicts are on full display in public shooting up drugs or passed out in broad daylight. Pictured: A man is slumped over semi-comatose condition barely able to move 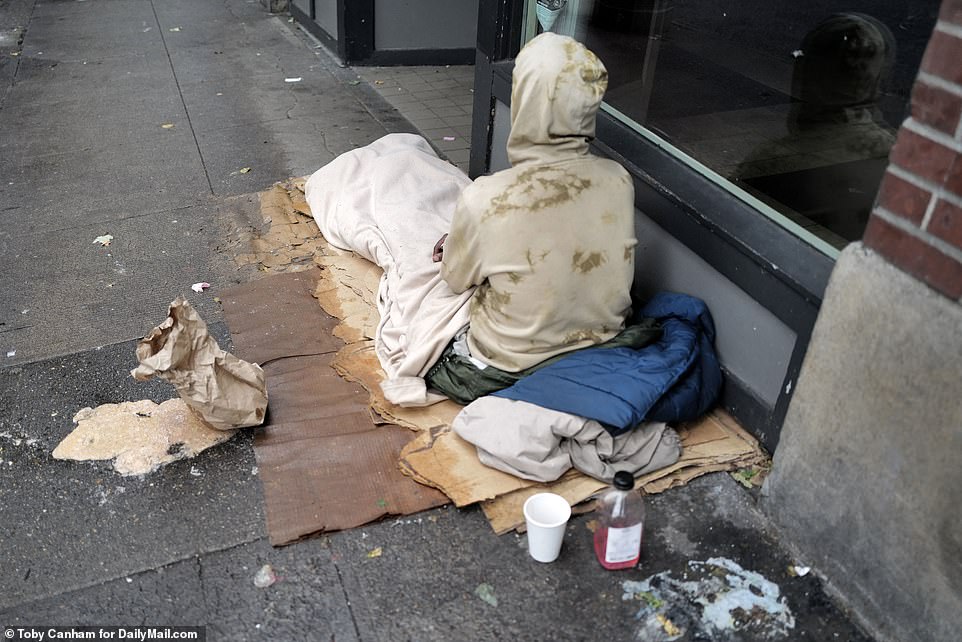 Wright detailed a plan to use a vacant school to help house homeless shelters like ‘the Japanese people,’ using the school as a shelter with small, compact spaces to help homeless people 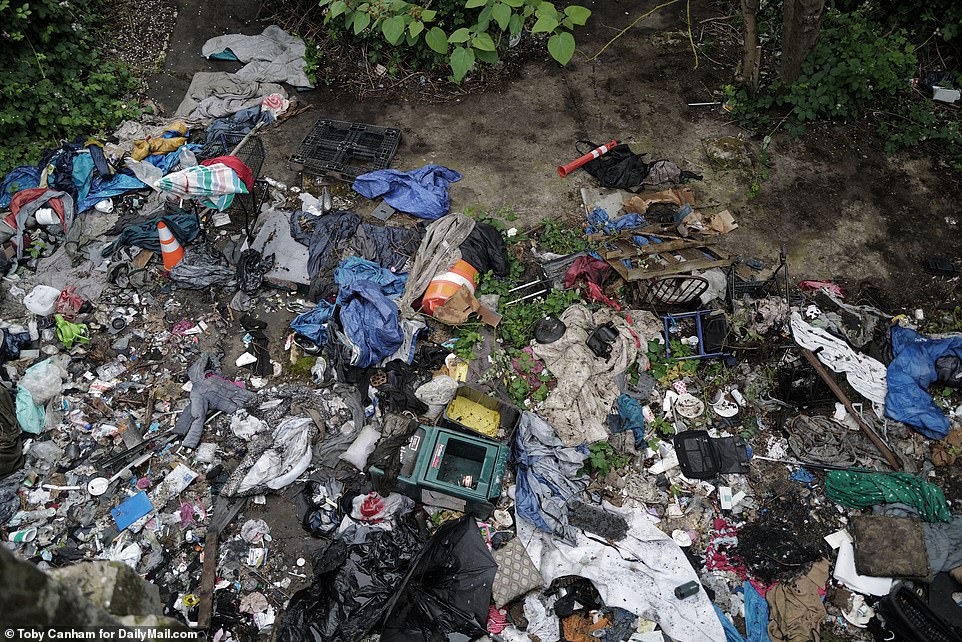 Discarded needles, trash, human waste and the smell of urine adds another layer of tarnish to city’s progressive policies 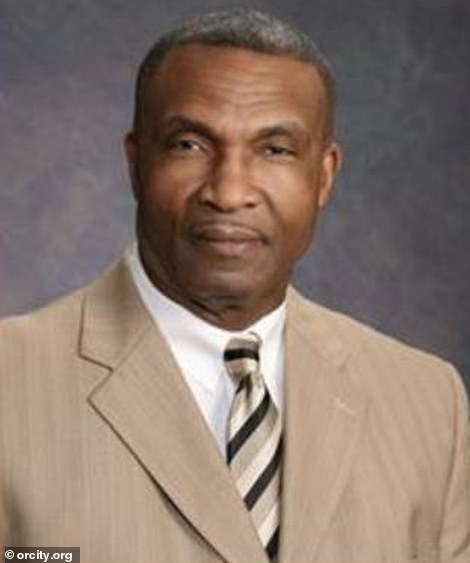 Leslie Wright, a mayoral candidate for Portland suburb Oregon City, says he wants to round up the homeless and put them in ‘Japanese-style’ pods as city becomes an ‘open air drug market’ and overdoses skyrocket by 41 percent

‘Have you ever seen the Japanese people, how they live? They live in these small, compact areas,’ Wright told radio show host Lars Larson. ‘We’re gonna take each one of those (homeless) people and give them their own little area and give them an address.’

During the Japanese internment in the 1940s, American citizens of Asian descent were rounded up in government compounds – which were crowded, hastily constructed buildings where many of them died.

Wright said that with his plan, homeless people who sheltered in a designated vacant school would have to get eye tests and potentially be sent elsewhere if they have mental health issues. No alcohol would be allowed on the property. Wright did not specify what former school building it would be, but added he would get permission from various local and state agencies before enacting the plan. 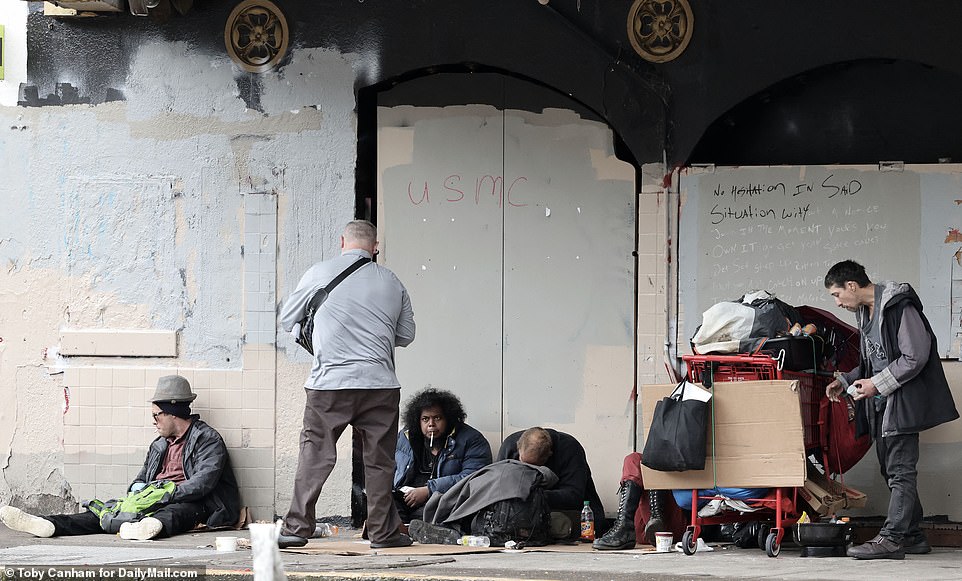 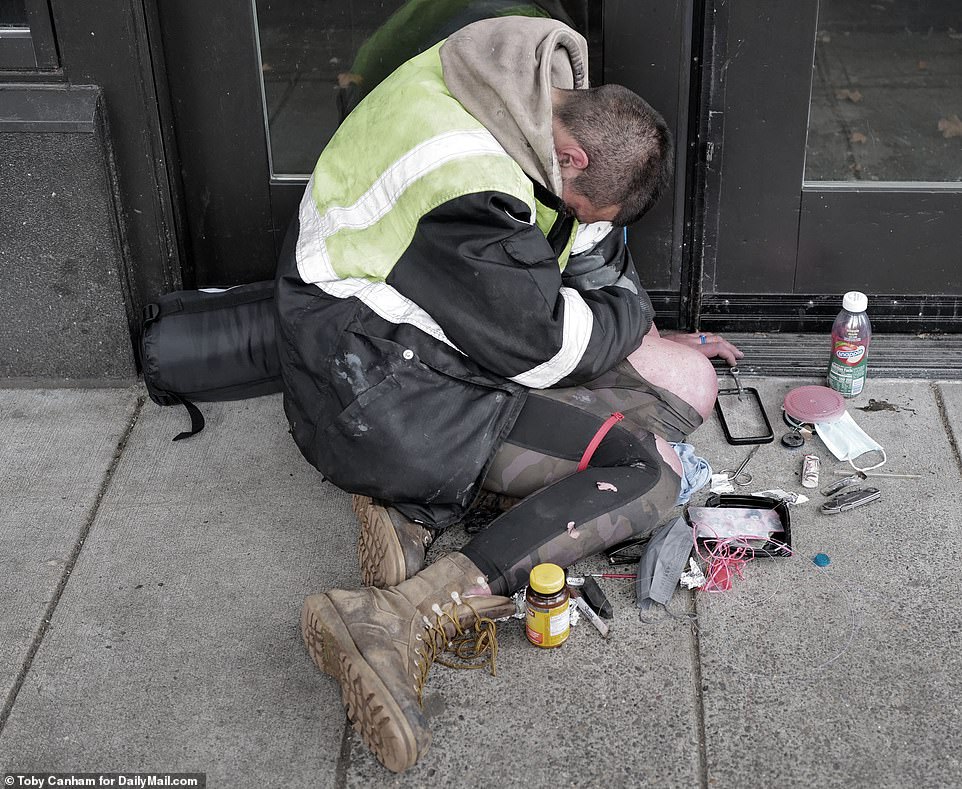 Wright received less than 30 percent of the vote in the March 2021 mayoral election, losing to former Mayor Rachel Lyles Smith. He has no previous experience in ab elected position in Oregon City. In August, Wright will face off in a special election against commission president Denyse McGriff, who has been serving as acting mayor since Smith’s resignation.

Homelessness and drug use continues to be an issue in the Portland area, and only got worse after the state decriminalized certain drugs for drug use.

Oregon was the first state in the United States to decriminalize possession of personal-use amounts of heroin, methamphetamine, LSD, oxycodone and other drugs after voters approved a ballot measure in 2020 to decriminalize hard drugs.

A person found with personal amounts of heroin, cocaine, methamphetamine and other drugs receives a citation, like a traffic ticket, with the maximum $100 fine waived if they call a hotline for a health assessment.

The state’s program, which has been promoted as a way to establish and fund addiction recovery centers that would offer people aid instead of incarceration, is being watched as a potential model for other states. 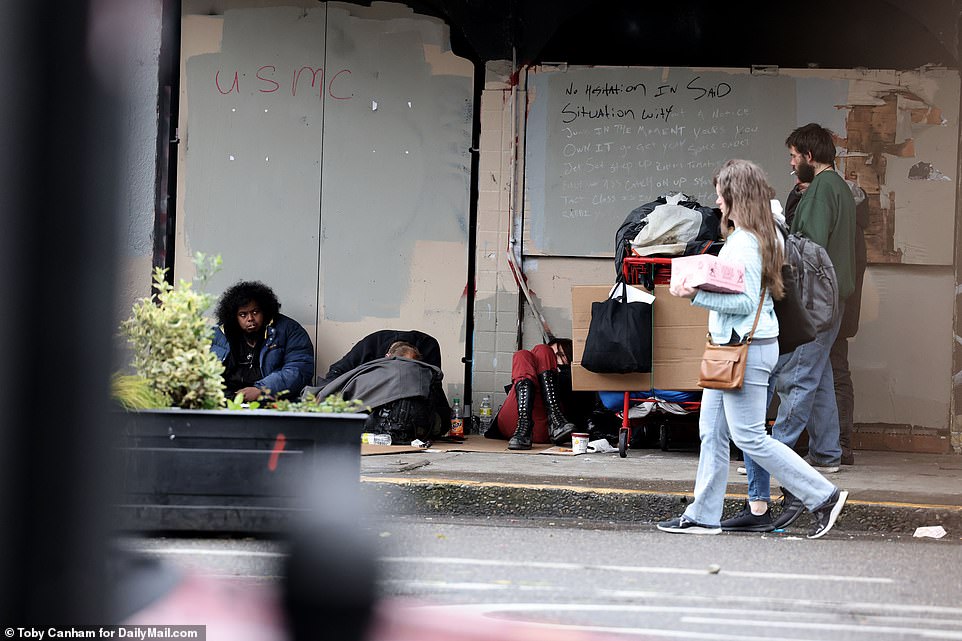 Wright said that with his plan, homeless people who sheltered in a designated vacant school would have to get eye tests and potentially be sent elsewhere if they have mental health issues. No alcohol would be allowed on the property 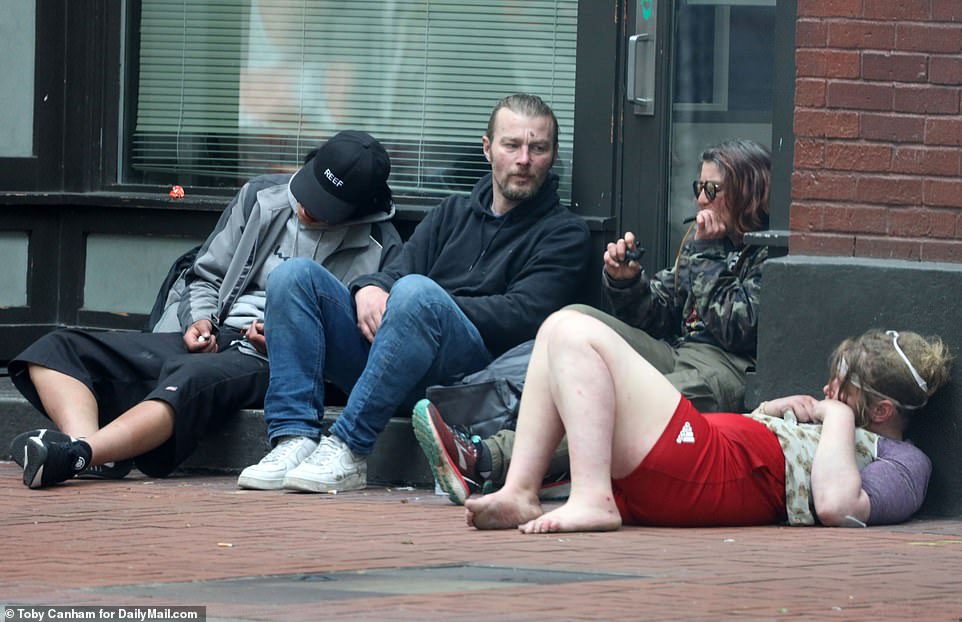 Homelessness and drug use continues to be an issue in the Portland area, and only got worse after the state decriminalized certain drugs for drug use 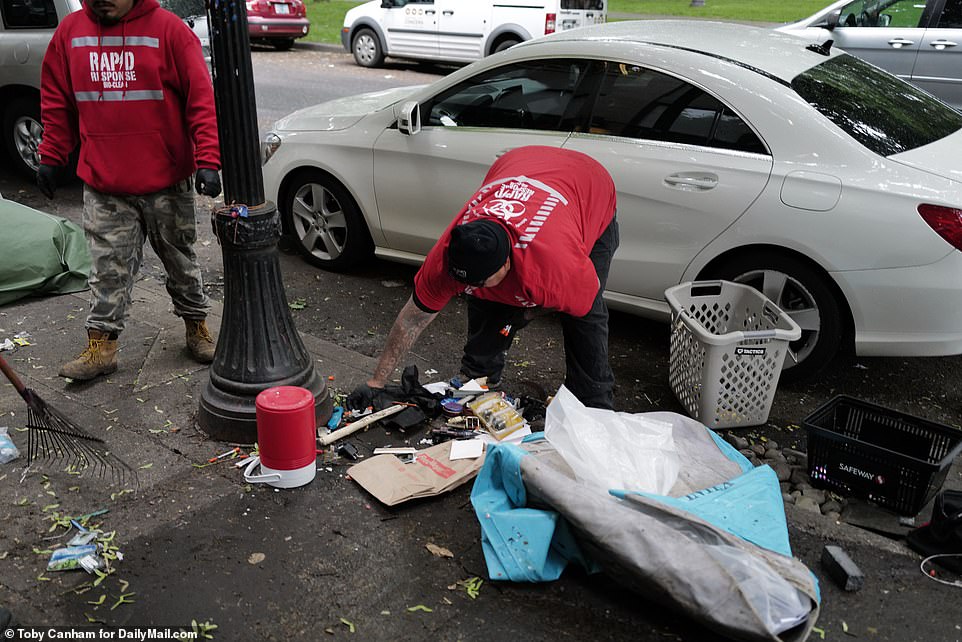 Oregon was the first state in the United States to decriminalize possession of personal-use amounts of heroin, methamphetamine, LSD, oxycodone 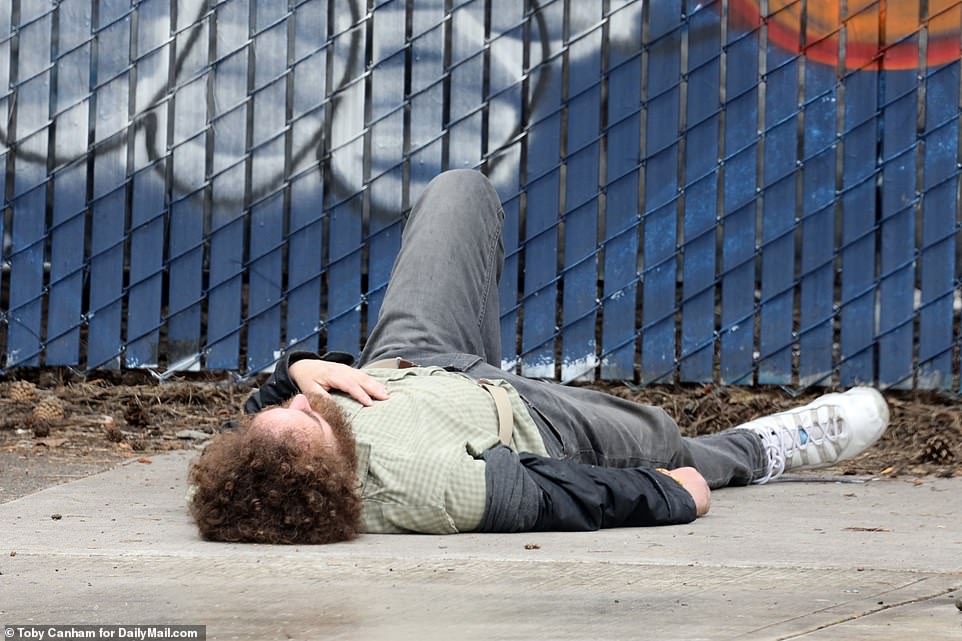 Under the new Oregon law that went into effect in February 2021, offenders caught with the following drug amounts can avoid criminal charges:

Offenders caught with the following amounts of drugs will be charged with misdemeanor simple possession, rather than a felony:

But some critics say that spending more money to reduce homelessness would not necessarily reduce the number of people living on the streets.

‘We’re used to saying, until there’s enough housing, don’t hold us accountable. But we have to be able to show that progress is being made,’ Rosanne Haggerty, founder and CEO of Community Solutions told KOIN.

Community Solutions argues that every homeless person needs to be identified by name, location and need in real time though a process it calls Built for Zero. The process is working for 107 communities, many of which have reduced their homeless populations.

In Portland’s Old Town neighborhood, a group of neighbors and property owners have taken things into their own hands when the challenged the city to ‘reopen’ Old Town with graffiti clean-ups, tent sweeps, and increased police, a local news blog reported.

The city reports that 343 tents were cleared from the Old Town area in April and May, and 87 of the people living in those tents were referred to a shelter bed. However, it is not know how many people actually moved into a shelter.

Oregon’s first-in-the-nation scheme to decriminalize drugs and encourage those caught possessing them to seek medical help has been blighted with problems, officials admitted earlier this month.

The pioneering scheme, Ballot Measure 110, was approved by voters in November 2020, and went into effect in February 2021.

A person found with personal amounts of heroin, cocaine, methamphetamine and other drugs receives a citation, like a traffic ticket, with the maximum $100 fine waived if they call a hotline for a health assessment.

And of the 1,885 people who received tickets for personal possession in the first year, only 91 people, a measly one percent, called the hotline, according to its non-profit operator, Lines For Life.

Earlier this month, those behind the scheme admitted that they had underestimated the effort required to distributed the $300 million in funds for the program, and only $40 million has been spent.

‘So clearly, if we were to do it over again, I would have asked for many more staff much quicker in the process,’ said Steve Allen, Oregon’s behavioral health director.

‘We were just under-resourced to be able to support this effort, underestimated the work that was involved in supporting something that looked like this and partly we didn’t fully understand it until we were in the middle of it.’

The ballot measure redirected millions of dollars in tax revenue from the state’s legal marijuana industry to treatment. 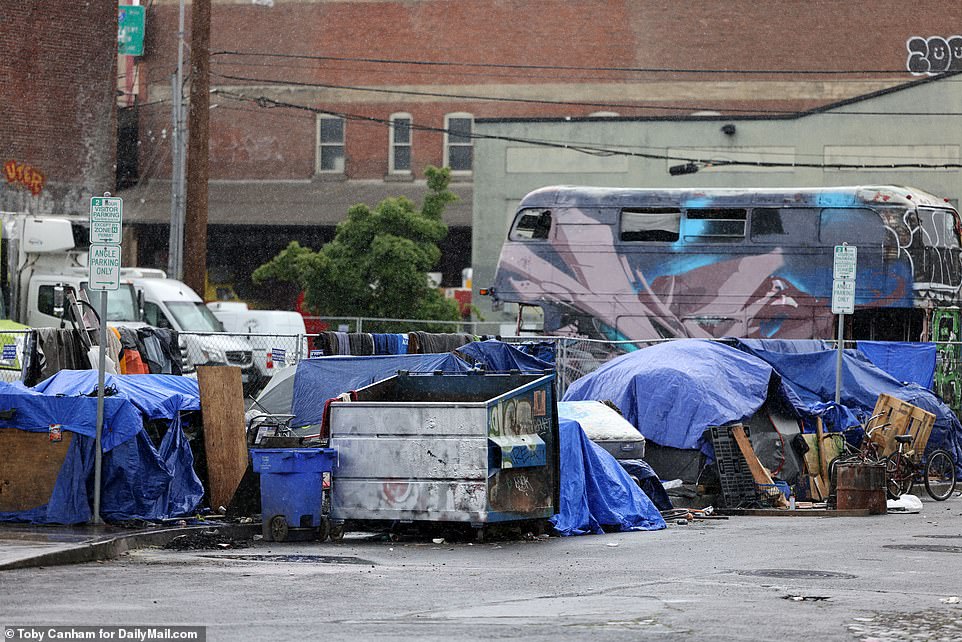 In some neighborhoods of Portland, communities are rallying together to sweep the homeless problem with graffiti clean-ups, tent sweeps, and an increased police presence 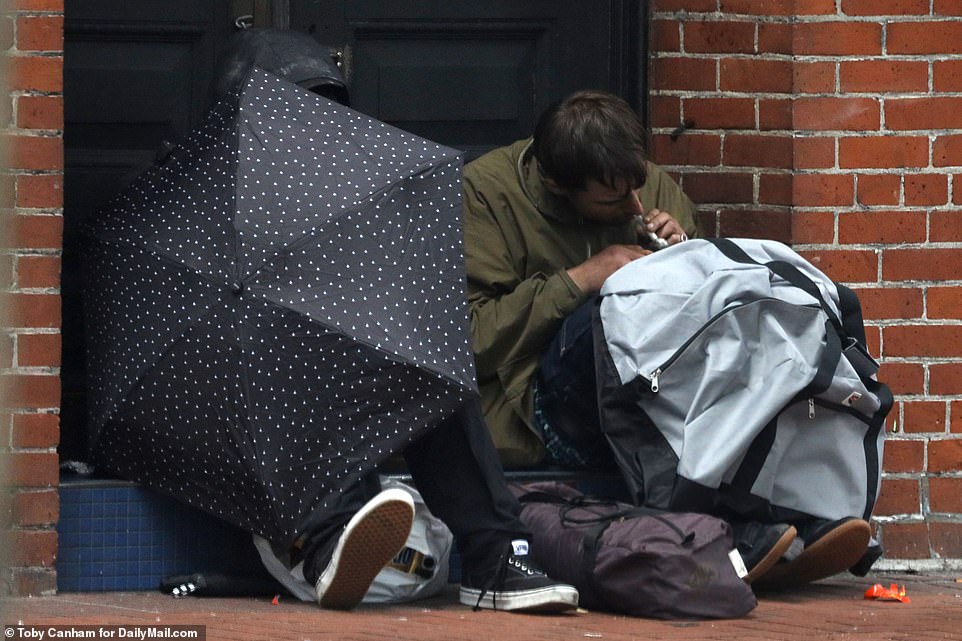 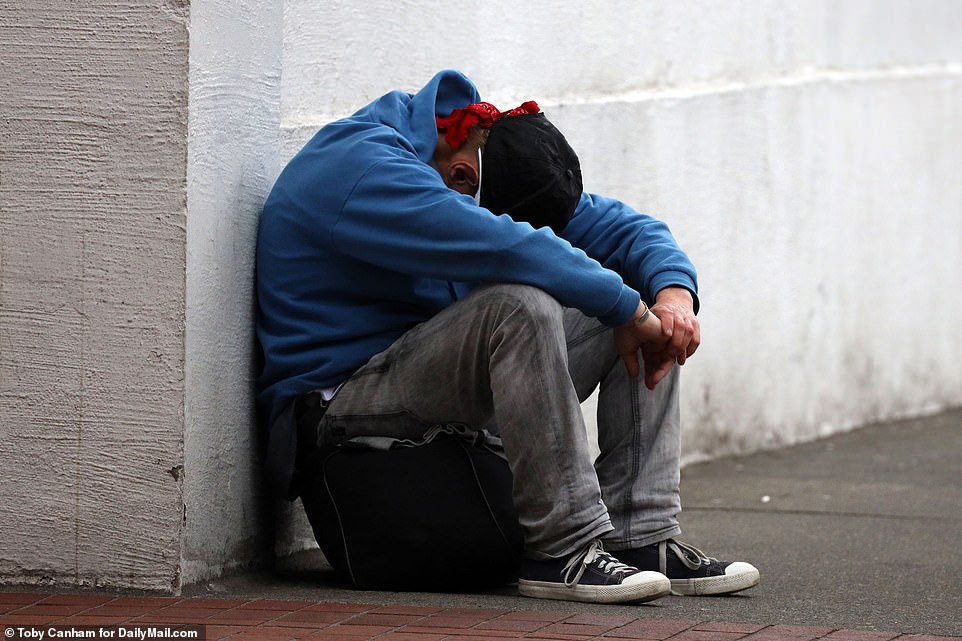 But applications for funding stacked up after state officials underestimated the work required to vet them and get the money out the door, officials testified earlier this month before the House Interim Committee on Behavioral Health.

Boudin was elected in 2019 on a platform of criminal justice reform, but the DA has been widely blamed for rising crime and homelessness in the Bay Area since the start of the pandemic – where brazen looters ransacking stores and breaking into cars has become commonplace.

So far this year, statistics show that the crime wave has worsened from last year – one of the worst crime years in decades – with the city’s murder rate rising 11 percent, and rapes up by nearly 10 percent.

Boudin’s time in office has also seen a marked rise in vagrancy – a stand-out issue in the Bay Area, where homelessness and brazen open drug use has increased in earnest during the pandemic.

But as infection rates plunge and restrictions continue to lessen, the city’s crime and seedy underbelly has persisted – frustrating citizens to no end.

San Francisco police report 20 murders so far this year, an 11 percent increase from the 18 reported in the same time last year.

Larceny theft, meanwhile – which represents the majority of the recent ‘smash and grabs’ – has skyrocketed under Boudin, with 13,424 cases reported this year, a 20.4 percent rise from the 11,151 reported last year.

Assaults have also been on the rise, with 11 percent with 1,035 cases reported so far this year, with rapes also up by a concerning 10 percent.

As larceny continues to see the largest increase in crime, the Bay Area has contended with a series of smash-and-grab robberies in the past year, with brazen thieves raiding stores in the middle of day. 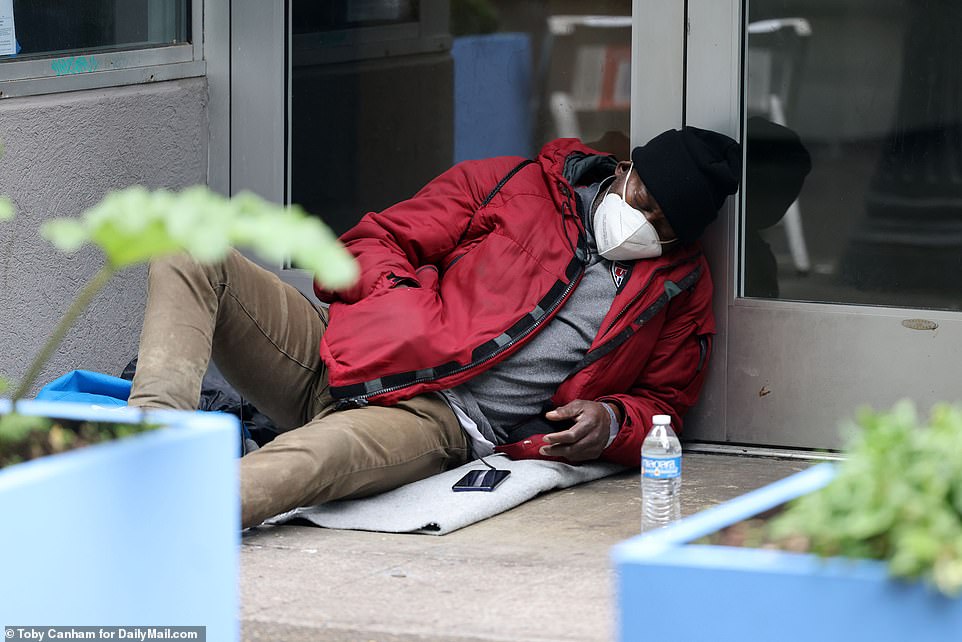 A homeless man is seen passed out in Portland, with his small collection of belongings, including phone and bottle of water 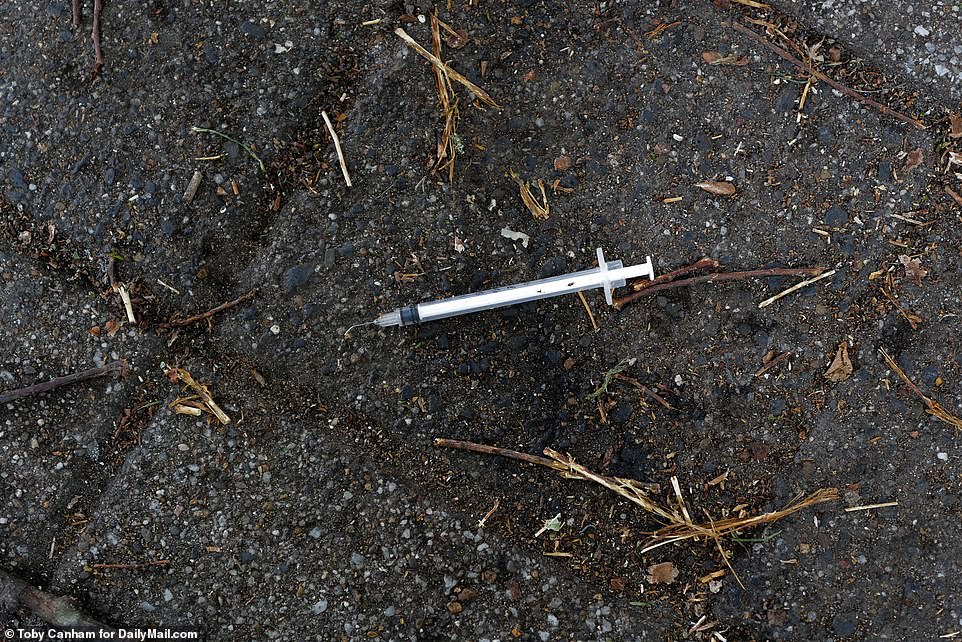 The general filth, discarded needles, human waste and the smell of urine is prevalent across areas of Portland 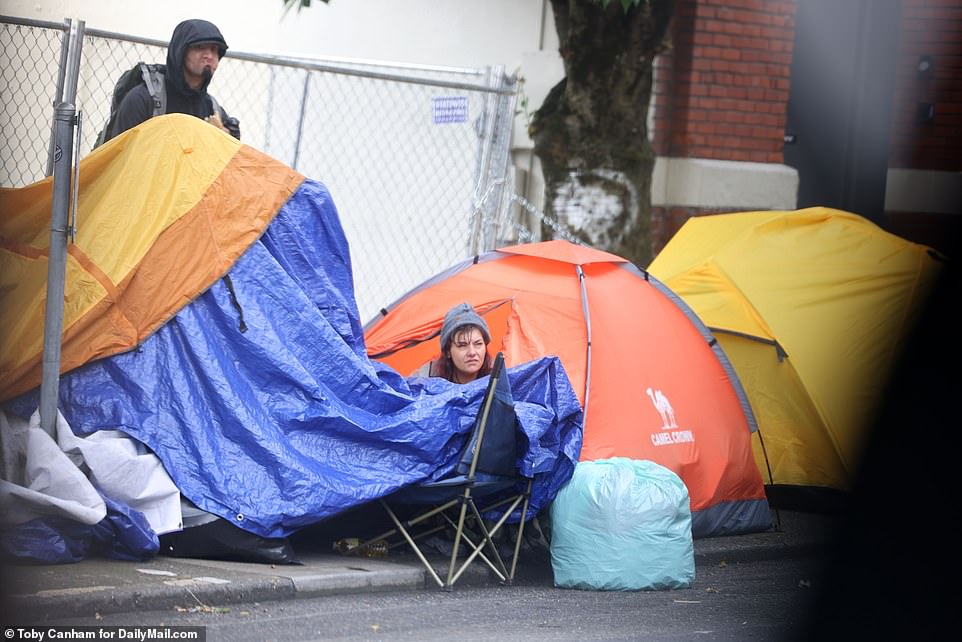 The streets of Downtown Portland are filled with open drug use, with the homeless using and buying drugs during the day 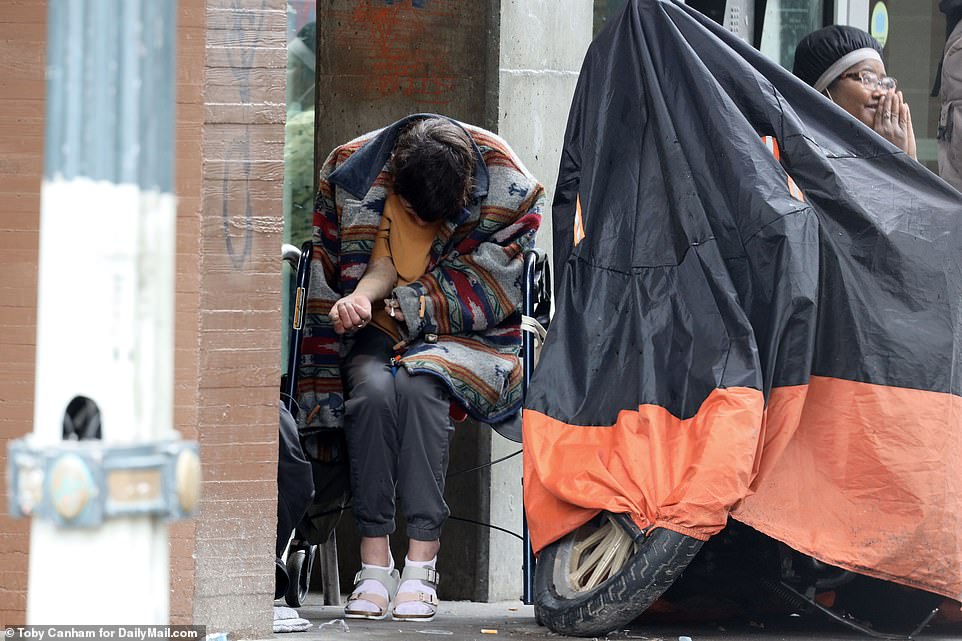 Illicit fentanyl started appearing on San Francisco streets in 2018, and is often mixed with other drugs such as heroin and cocaine to increase potency.

Overdose deaths rose rapidly with the arrival of fentanyl and deaths connected to the drug increased from nine in 2009 to 230 in 2019, the city said in a report. In 2021, the city reported 474 deaths due to fentanyl.

The city has taken several steps to address the fentanyl epidemic, including adding new drug and mental health beds and launching the Street Overdose Response team to provide care for people at high risk of overdose, SFGATE reported.

San Francisco Mayor London Breed declared a state of emergency in the city, which streamlined the city’s permitting regulations in order to quickly open the linkage center. The facility connects people living on the street and struggling with substance use and mental health issues, to services.

The state of emergency expired in April, but the mayor renewed aspects of the declaration to allow city workers to serve as disaster service workers to respond to issues in the Tenderloin neighborhood, which is particularly hard hit.

‘The mayor agrees that we need to break up open-air drug dealing in San Francisco,’ the mayor’s office wrote in an emailed statement.

‘Police officers are making arrests every day, and in the last few weeks an additional 20 officers have been added to the Tenderloin neighborhood to support our emergency response initiative. The police have seized over 10 kilos of fentanyl in the Tenderloin area this year alone, which is roughly four times more than was seized over the same time period last year. We know more needs to be done to make more arrests, but there also needs to be accountability for the people who are dealing drugs, committing acts of violence, and making our communities less safe.’

Foreigners party on a boat as it arrives in Gili Islands