This is the terrifying moment a paraglider began falling to the ground when his lines got tangled in high winds, before managing to open his rescue shoot just ‘one second’ before it became too late to survive.

However, the Swiss daredevil got into trouble when he appeared to crash into his canopy (or wing) while pulling off a trick, causing him to get tangled in the cables.

To make matters worse, when he tried to release his first parachute, it failed to deploy because of the tangled lines – sending him plummeting towards the rapidly approaching ground.

Philipp posted footage – shot from a 360-degree camera on his helmet – of his near-death experience to YouTube on Monday, showing how the incident unfolded from a vantage point just above his head. 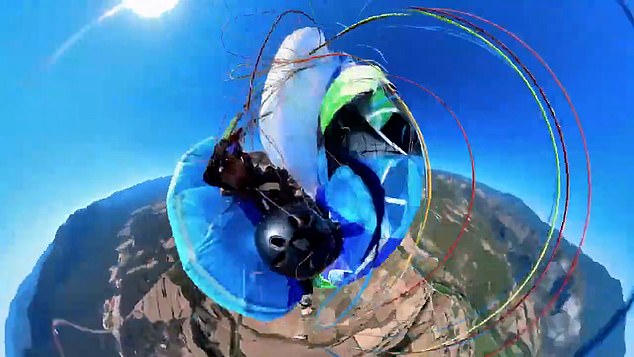 This is the terrifying moment paraglider Kevin Philipp began falling to the ground when his lines got tangled in high winds, before managing to open their rescue shoot just ‘one second’ before it became too late to survive 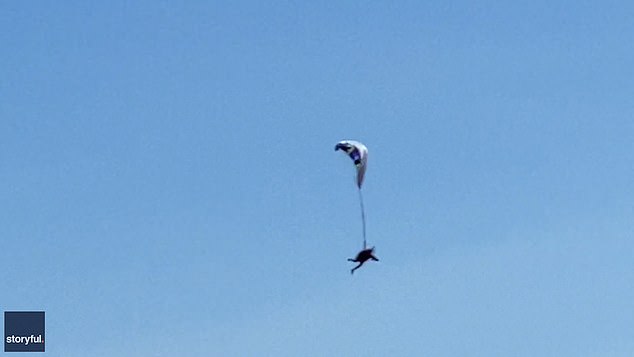 After crashing into the glider’s canopy, the cables attaching Philipp to the paraglider became tangled around him and the canopy, causing the wing to crumple and trail behind him like a windsock (pictured) – as he began to accelerate towards the ground below

A separate video, shot from the ground, also showed just how quickly he was plummeting out of the sky – and his frantic scramble to save himself.

In the description of the video, he wrote on YouTube that his problems began when he encountered ‘strong turbulence’ while attempting an Acro paragliding trick.

Footage from his helmet camera showed as he was performing a trick, Philipp lost control and crashed into his glider’s canopy.

As he did so, the cables attaching him to the paraglider became tangled around him and the canopy, causing the wing to crumple and trail behind him like a windsock – as he began to accelerate towards the arid ground below.

Reacting to the danger, Philipp deployed his rescue parachute to begin his descent. However, the footage shows that his parachute failed to unfurl, instead just trailing above alongside the tangled wing. 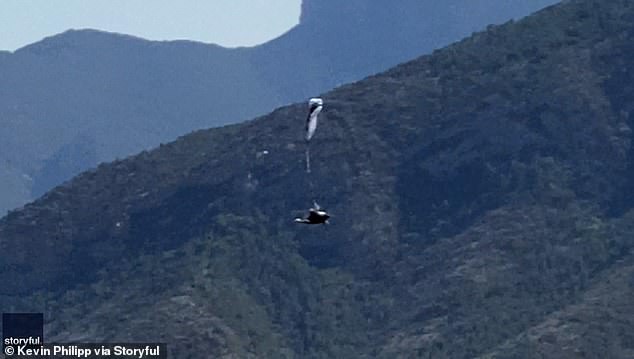 Pictured: Extreme paraglider Kevin Philipp can be seen plunging towards the earth after his glider got tangled in its own cables and his rescue parachute failed to deploy 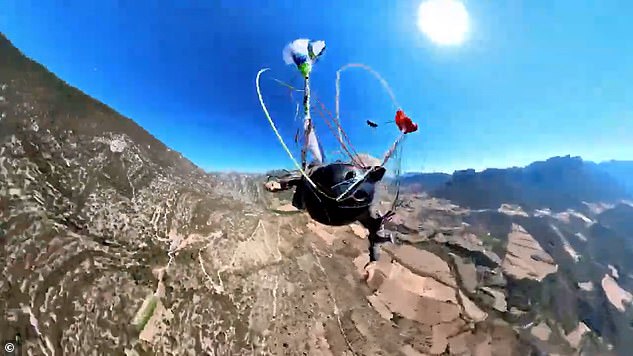 Kevin Philipp was paragliding in Organya, Spain, doing ‘acro’ – a freestyle discipline of paragliding that involves performing gravity-defying tricks in the air. When he went to deploy his parachute (shown right in red), it failed to unfurl causing him to plummet towards the earth 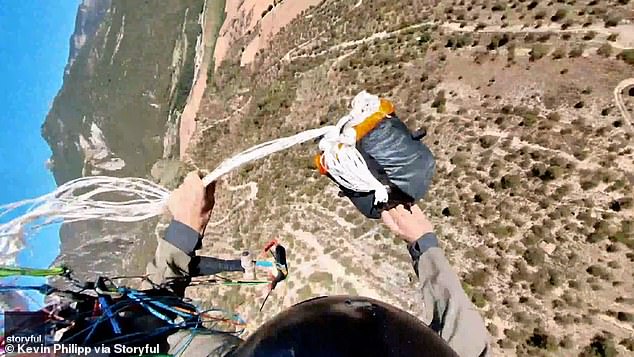 Pictured: Philipp was able to reach for his back-up parachute (pictured) in the nick of time

With the ground getting closer and closer, the paraglider had to think fast. Despite the flailing cables, he was able to reach for his back-up parachute.

The footage shows him pull the orange parachute away from his body and rip it open, releasing it in the nick of time for it to open above him – moments before crashing he would have crashed into the ground.

Instead, as the ground rises to meet him and his wing and initial parachute trail in a tangle above him, the footage shows him landing at speed – but safely – in a bush.

‘The falling speed increased a lot due to the twisting wing,’ Philipp wrote.

‘Very last chance was to manually open the rescue package. Estimated time left about 1 second. This was not the day to die! Thanks!’ 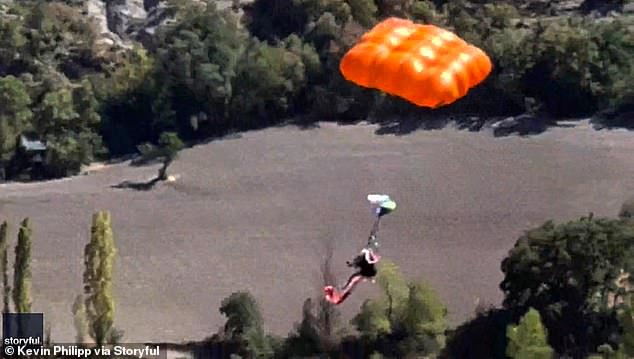 Pictured: Philipp is seen moments after unfurling his back-up parachute as he reaches ground 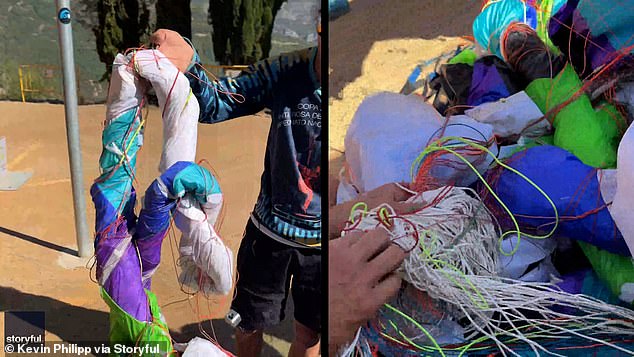 Pictured: Philipp holds his tangled glider up to show how the cables wrapped around the wing as he was falling from the sky

At the end of his YouTube video, Philipp is shown holding his tangled glider up the camera, showing how the lines had completely incapacitated the wing.

‘In acro paragliding we face a lot of tries and errors in learning the tricks. With 2-3 rescue parachutes and a lot of height we can safely train this kind of sport,’ he wrote.

‘This occasion is quite unlucky and rare. Just to keep in mind. Fly high, land safe.’

Fans reacted in amazement to his incredible escape.

‘Insane! This is what fighting for your life looks like. Glad you won!,’ one YouTube user commented under the video. Philipp replied: ‘Was a hell of a fight!’

Another user asked the dare-devil: ‘Why didn’t the first reserve open quickly? Packed too tight?’ Philipp explained: ‘The handle was stuck in the lines so it couldn’t travel far enough to deploy.’

Another user said: ‘Amazing video! I mean, omg how crazy, but just goes to show never give up no matter what. So glad you were able to walk away with your life!’