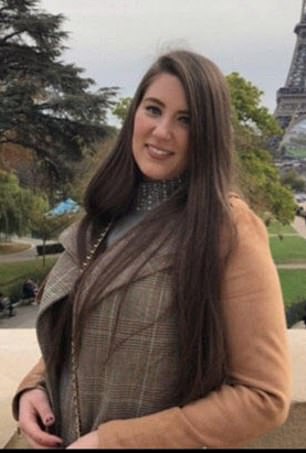 Sharon Anderson, 30, is plagued by constant wrist pain which she claims was caused by carrying out repetitive and delicate tasks

A pastry chef is suing Heston Blumenthal’s Fat Duck restaurant for £200,000 in damages claiming she was left with repetitive strain injury from churning out thousands of chocolate playing cards and whisky wine gums.

Sharon Anderson, 30, is plagued by constant wrist pain which she claims was caused by carrying out repetitive and delicate tasks in the kitchen of the three Michelin-starred restaurant in Bray, Berkshire.

Her work included putting 400 sweets a day into small bags using tweezers, racing against time to make chocolate playing cards before the chocolate set too hard, and administering hundreds of tiny fingertip pinches to mushroom logs.

Last week her lawyers told a judge that the ‘fast, arduous and repetitive’ tasks meant she was effectively working on a factory floor as she made the concoctions dreamt up for the celebrity chef’s kitchen.

‘She was essentially on what was effectively a production line,’ her barrister Joel Kendall told Judge Victoria McCloud at the High Court in London, where Ms Anderson is claiming damages for the end of her promising career as a chef.

The Fat Duck Ltd denies liability for Ms Anderson’s injury, claiming the work she did was routine for a pastry chef in a ‘fine dining restaurant’ and she was given sufficient breaks.

The Bray restaurant opened in 1994 and achieved three Michelin stars in a record three years, carving out a name for eccentric genius by serving up dishes such as Mr Blumenthal’s ‘nitro scrambled egg and bacon ice cream’.

The virtuoso cook and his protégés have become famous for their culinary experimentation, and the restaurant has a nearby laboratory, where the team concoct their pioneering creations. 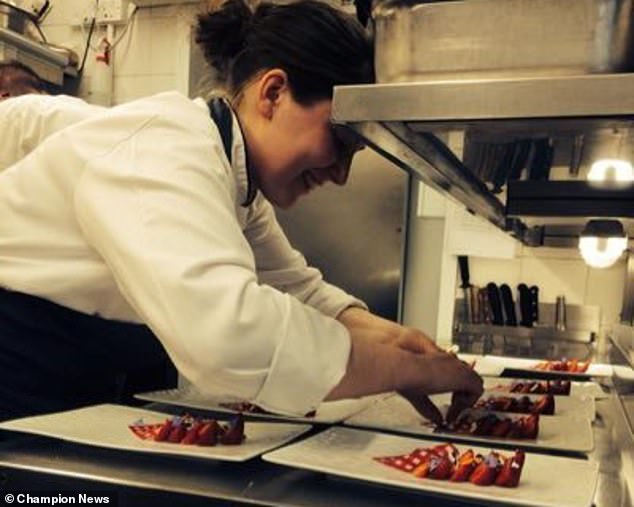 Sharon Anderson’s lawyers told a judge that the ‘fast, arduous and repetitive’ tasks meant she was effectively working on a factory floor as she made the concoctions dreamt up for the celebrity chef’s kitchen 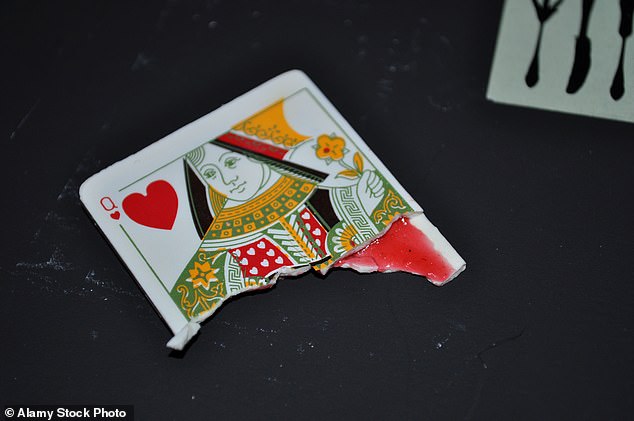 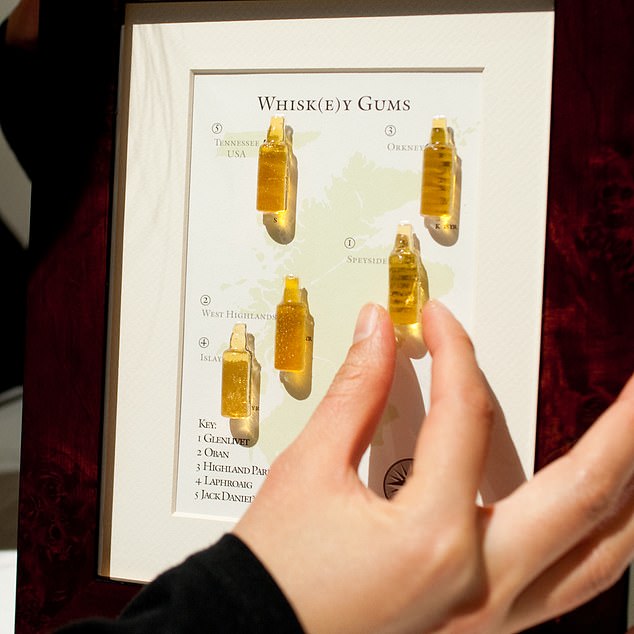 Ms Anderson’s work included making whisky wine gums between 4-6pm, she says, and she would produce around 550 by hand 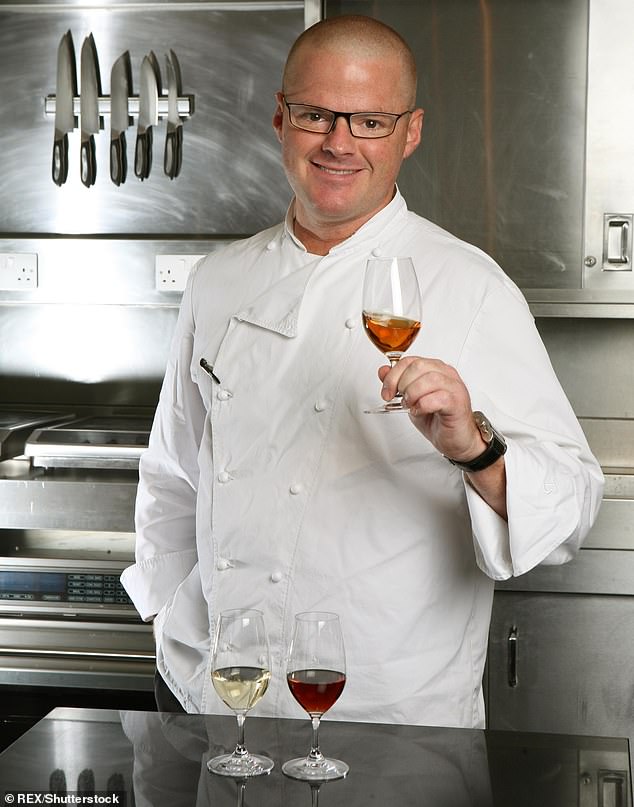 The Bray restaurant opened in 1994 and achieved three Michelin stars in a record three years, carving out a name for eccentric genius by serving up dishes such as Mr Blumenthal’s (pictured) ‘nitro scrambled egg and bacon ice cream’

Ms Anderson, of Letterkenny, Co Donegal, Ireland, began as a commis chef at the restaurant in June 2014 and claims her injury was caused by being made to perform work which was ‘too fast, arduous and repetitive for her.’

What is Repetitive strain injury?

Repetitive strain injury (RSI) is a general term used to describe the pain felt in muscles, nerves and tendons caused by repetitive movement and overuse.

The condition mostly affects parts of the upper body, such as the forearms and elbows, wrists and hands, neck and shoulders.

The symptoms of RSI can range from mild to severe and usually develop gradually. They include pain, aching or tenderness, stiffness, throbbing, tingling or numbness

At first, you might only notice symptoms when you’re carrying out a particular repetitive action.

But without treatment, the symptoms of RSI may eventually become constant and cause longer periods of pain. You may also get swelling in the affected area, which can last for several months.

RSI is related to the overuse of muscles and tendons in the upper body.

Certain things are thought to increase the risk of RSI, including repetitive activities, doing a high-intensity activity for a long time without rest, poor posture or activities that involve working in an awkward position.

She did an initial six-month spell from June to December 2014 where she carried out food preparation tasks involving manual dexterity, and under pressure of time, she says.

Her role included packing individually wrapped sweets into cellophane bags from 7-11am, before she switched to creating chocolate playing cards from 11.30am to around 4pm.

Ms Anderson had to place each sweet into its own cellophane bag using tweezers and believes she ‘wrapped and packed’ around 400 separate sweets each day.

The chocolate playing cards were made in moulds of metal and plastic, while each mould could create 12 cards and weighed over a kilo.

Ms Anderson would hold the mould in her left hand with her palm upturned – and her wrist extended – while ladling chocolate in with her other hand.

The completed mould weighed around two kilos, it is claimed, and Ms Anderson aimed to produce around 180 cards per day.

On top of that, she had to ‘demould and trim’ the cards with a paring knife to ‘perfect them and scrape off excess chocolate’.

‘The process had to be carried out under time pressure as it had to be completed before the chocolate set in each mould,’ her lawyers claim in court papers.

Her kitchen shift then switched to making whisky wine gums between 4-6pm, she says, and she would produce around 550 by hand.

Ms Anderson followed the restaurant when it moved to Melbourne, Australia, in January 2015, while the Bray premises were renovated.

From February 2015, her work followed a similar pattern to life in Bray, she claims, although she was under pressure to handle even more moulds, due to wastage caused by cards melting faster in the warmer climate.

In June 2015, she began complaining of pain in her forearm and was told by her physio that her pain was being caused by her ‘long hours and repetitive work.’

She temporarily stopped work due to the pain, but three months later resumed work at the revamped Bray restaurant, before hanging up her apron for good in November 2015. Her role during her final phase at the Fat Duck again involved tasks such as ‘hand-piping whisky wine gums’ and wrapping petit fours sweets.

But she also spent a week preparing mushroom logs, requiring her to ‘pinch creases into 500 sugar sheets per week with her fingers’, she claims.

The injury means she has recurring problems with daily tasks such as heavy lifting, driving and cooking.

Ms Anderson’s lawyers claim the restaurant failed to allow sufficient rest periods or support, and ‘required her to work under time pressure throughout the day’.

But the Fat Duck is denying all the claims and points out that Ms Anderson was transferred to lighter duties after she complained about making chocolate patisserie.

The work she carried out had no known risk of triggering an ‘upper limb disorder’, defence lawyers insist, and the techniques she practised are standard in the world of haute cuisine.

Her workload was not oppressive and Ms Anderson was given all the support and assistance she needed, they maintain.

In court, the restaurant’s barrister John Williams claimed there was a stark lack of medical evidence on Ms Anderson’s side.

He said her claim was a ‘unique case – given the occupational context of a pastry chef undertaking these kinds of tasks alleging an upper limb disorder.’

After a brief court hearing, Judge McCloud adjourned the dispute, directing a case management conference for May 2022 ahead of a trial of her compensation claim.

Partying to the Max! Verstappen lets his hair down after Formula One triumph