House Speaker Nancy Pelosi said she is ‘very disappointed’ Democrats will have to trim down their $3.5 trillion budget reconciliation bill after moderates balked at the number, and said the IRS proposal for banks to hand over transaction data would still be included.

‘I’m very disappointed that we’re not going with the original $3.5 trillion which was very transformative,’ the California Democrat told reporters Tuesday upon returning from a trip to Europe to meet with G-20 leaders.

But she promised: ‘Whatever we do well make decisions that will continue to be transformative about women in the workplace.’ She cited proposals such as universal pre-kindergarten, funding for child care and home health care and child tax credits.

‘I mean, we’re still talking about a couple trillion dollars, but it’s much, much less,’ the speaker said. She signaled climate measures would still be a priority too, but did not signal what could be up for the chopping block.

She said Democrats might have to pare back the number of years of guaranteed funding for their plans.

Pelosi said in a letter Monday night that she had continued discussions on the $3.5 trillion bill, the Build Back Better agenda, throughout her trip. ‘It is essential that difficult decisions must be made very soon.’

‘Overwhelmingly, the guidance I am receiving from Members is to do fewer things well so that we can still have a transformative impact on families in the workplace and responsibly address the climate crisis: a Build Back Better agenda for jobs and the planet For The Children!’ she said in a statement.

During a news conference, a reporter told Pelosi that banks were ‘starting to get calls’ from customers worried about the IRS proposal tucked into the bill that would have banks hand over all transaction data on accounts over $600.

Asked if she thinks this proposal will stay in the final package, Pelosi said: ‘Yes, yes, yes.’

‘With all due respect, the plural of anecdote is not data,’ she continued.

‘Yes there are concerns that some people have, but if people are breaking the law and not paying taxes, one way to track them is through the banking measure,’ Pelosi said.

The speaker also blamed reporters for not selling the $3.5 trillion plan when faced with a poll showing hardly any Americans know what’s in it.

‘Do you think you need to do a better job at messaging, and going forward, how do you sell this?’ CBS News’ Nikole Killion asked.

‘Well I think you all could do a better job of selling it, to be very frank with you,’ Pelosi shot back, noting that the media had not honed in enough on proposals such as family medical leave. ‘Every time I come here, I go through the list … It is hard to break through when you have such a comprehensive package.’

Pelosi also said a proposal to take debt ceiling authority away from Congress and hand it to the Treasury ‘has merit.’

The House is scheduled to vote Tuesday on  a short term extension to the debt limit, but Democrats will have to find a way to extend the ceiling beyond September on their own as Republicans have said they will not support the extension.

Sens. Joe Manchin and Kyrsten Sinema are the last remaining stalwarts against the robust spending bill they have said is too costly. While Sinema, D-Ariz., has refused to nail down an exact figure publicly, Manchin, D-W.Va., has said his topline is $1.5 trillion. 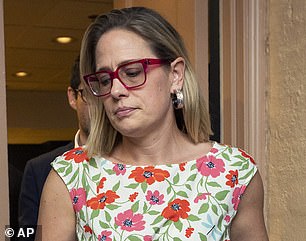 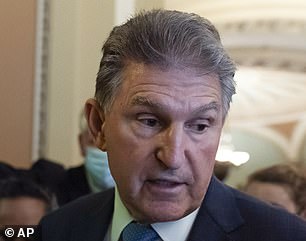 Sens. Joe Manchin and Kyrsten Sinema are the last remaining stalwarts against the robust spending bill they have said is too costly

Democrats need all 50 votes in their caucus in the split Senate to pass reconciliation bills, where Vice President Kamala Harris can submit a tie-breaking vote.

House progressives, in turn, have said they will not vote for the $1.1 trillion bipartisan infrastructure bill until the Senate shows movement on the larger package.

Meanwhile, a number of states have already told DailyMail.com they will not comply with the proposal to hand over transaction data to the IRS on accounts over $600, citing sharp outcry from the public.

The proposal, backed by $79 billion in additional IRS funding, is expected to generate $463 billion over the next decade, according to the Office of Tax Analysis.

So far, 24 state treasurers, auditors and financial officers have signed onto a letter opposing the policy.