Elderly Britons given AstraZeneca’s vaccine are less likely to have Covid antibodies than those who had Pfizer’s, a study has suggested.

Imperial College London researchers found fewer than 85 per cent of over-80s had detectable levels of the virus-fighting proteins two weeks after their second AZ jab.

By contrast, the proportion of over-80s with antibodies after getting the second Pfizer vaccine was almost 98 per cent.

The findings came from Britain’s largest surveillance study, known as REACT-2, which randomly tests blood samples from hundreds of thousands of Britons.

Although antibodies are just one part of the overall immune response to Covid, experts said the study results were not totally surprising.

Professor Ian Jones, a virologist at Reading University, told MailOnline the British jab was less likely to spark immunity because it relied on a weakened cold virus.

In some cases the body may attack this virus instead of the Covid proteins on its surface, which results in the jab failing to spark Covid immunity, he said. But Pfizer’s jab does not have this problem because it uses a completely different technology.

In trials of the jabs, AstraZeneca’s vaccine was also found to be slightly weaker at preventing symptomatic Covid infection.

But real-world analysis of Britain’s vaccine rollout has shown that both vaccines are extremely effective at stopping severe illness and death.

Even against the Indian variant, they were both shown to reduce the risk of being hospitalised with the virus by more than 90 per cent. 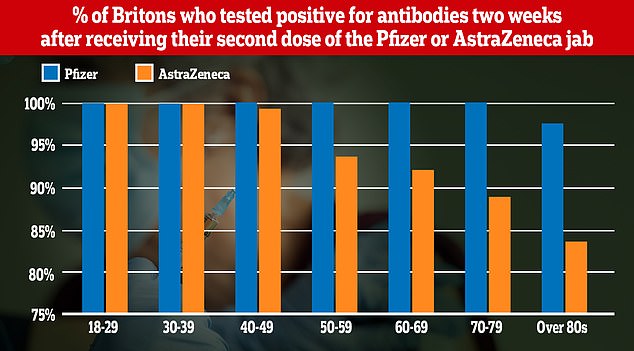 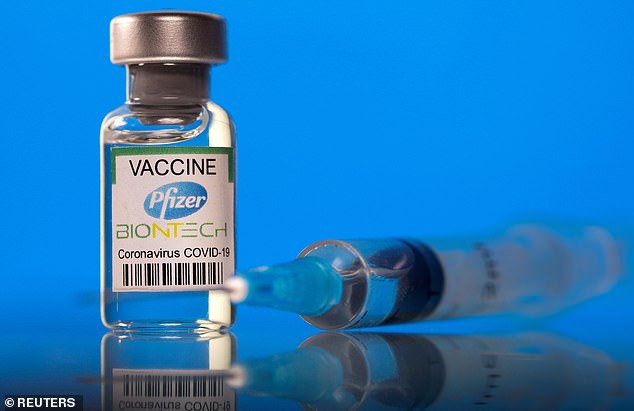 Britain’s largest study of Covid antibodies suggests Pfizer’s jab is more likely to spark immunity to the virus than AstraZeneca’s. Experts said this is because the Oxford-made jab relies on a weakened cold virus

REACT-2 looked at more than 207,000 participants from across the country for Covid-fighting antibodies.

The study was carried out over the two weeks to May 25 when the inoculation drive had only just been opened to people in their thirties.

Some individuals in younger age groups will have been vaccinated if they were in a top priority group — including healthcare workers and those who were clinically vulnerable to the virus because of an underlying condition.

Fears about the mRNA jabs’ links to myocarditis had been growing in recent weeks, following a string of cases in young adults and children in Israel and the US.

Now the UK’s drug watchdog has updated its safety information to accept that the condition is a possible side effect of both vaccines, without a formal announcement.

The Medicines and Healthcare products Regulatory Agency insists the complication – inflammation of the heart muscle which can damage the organ over time – is still ‘extremely rare’ and ‘typically mild’.

But it wasn’t listed as a potential side effect until last week, when the MHRA released its most up-to-date safety surveillance data.

Cardiologists say the benefits of both jabs still clearly outweigh the risks for the vast majority of the population.

However, they say it ‘completely changes’ the debate about vaccinating children in Britain. They won’t get AstraZeneca’s jab because of its links to deadly blood clots in young people.

The study found 100 per cent of under-39s given the AstraZeneca jabs had antibodies two weeks after they had received their second dose.

For comparison, the Pfizer vaccine sparked protection in 100 per cent of all age groups except the over-80s, where the proportion was 97.8 per cent.

But Professor Jones told MailOnline: ‘What does seem true from these numbers — and this is one of the biggest surveys — is that the failure rate is higher for AstraZeneca than it is for Pfizer.

‘There are some individuals by chance or because of a recent cold who have antibodies to the (adenovirus) and that stops it getting in [the immune system] in the first place.’

Antibodies are just one part of the immune response to Covid and do not determine how protected someone is – for example, white blood cells also play a crucial role.

But they are one of the key ways scientists can measure how well a person responds to a vaccine.

Antibody levels fade over time but this does not mean they lose immunity. The body stores the memory of how to fight a specific virus long after the initial immune antibodies drop.

Johnson and Johnson’s one-shot Covid vaccine also uses adenovirus technology. That vaccine has been approved in the UK and doses are expected to arrive in the autumn.

Adenovirus vaccines work by using a weakened form of the common cold which carries instructions to cells teaching them to fight Covid.

When the vaccine is administered the patient’s immune system attacks the spike protein by building antibodies, priming it to fight off Covid before it leads to an infection.

Moderna jab, the third vaccine currently being deployed across Britain, relies on the same mRNA technology as Pfizer’s, which uses a synthetic delivery method.

Meanwhile, REACT-2 also found black Britons were the least likely group to get a Covid vaccine.

When their study was broken down by ethnicity it revealed antibody levels were 59 per cent lower in black Britons compared to white Britons.

The NHS and ministers have been spearheading a drive to ensure everyone is vaccinated against the virus, by opening jabbing clinics in community centres and asking local leaders to call on their community to get the vaccine.

The study also found 61 per cent of adults in the UK had antibodies in May, which was up from 13.9 per cent in the two weeks to February 8.

But they said the levels were now likely ‘far higher’ because more people have been vaccinated.

Department of Health figures show 46million Britons have received at least one dose of the Covid vaccine — 87.3 per cent of adults — and 35.1million have got both doses — 66.6 per cent.

NSW woman, 48, died after getting Covid-19 vaccine despite warning to stop AstraZeneca for under-50s