Peter Andre has tonight hit back after the alleged size of his manhood took centre stage on day one of the highly-anticipated Wagatha Christie legal battle between Rebekah Vardy and Coleen Rooney.

The Mysterious Girl singer, 49, took to Instagram after Mrs Vardy told London’s High Court that she regretted comparing his private member to a ‘chipolata’ in a kiss-and-tell newspaper interview.

Mrs Vardy said she had been ‘forced’ to take part in the News Of The World article by her ex-husband.

Mr Andre, who appeared on I’m A Celebrity…Get Me Out Of Here in 2004, said today: ‘Do you know how hard it is to keep biting my lip on situations?

‘But the way I look at it, most people saw in the jungle how an acorn turned into an oak so I think I’m ok.’

He added: ‘At least she has now admitted it wasn’t true and was forced to say it.’ 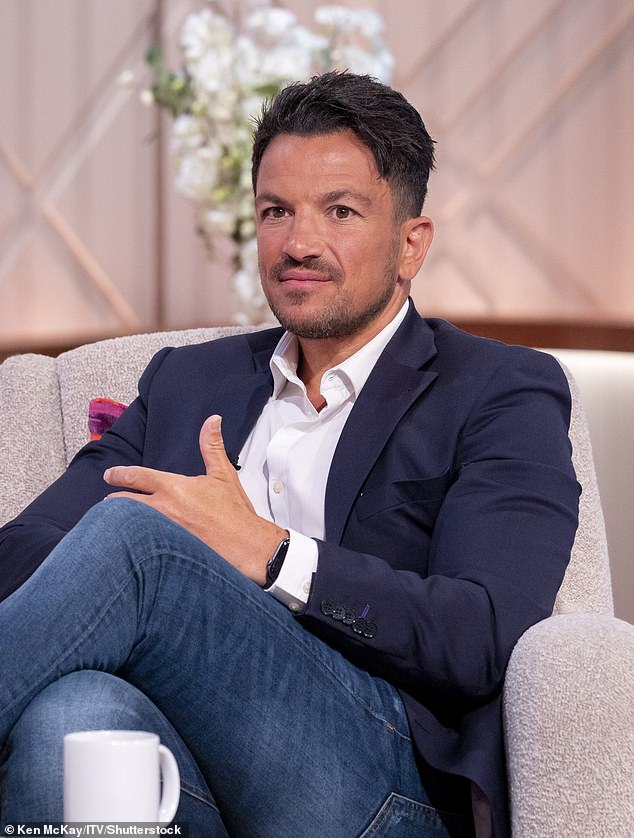 Peter Andre, 49, took to Instagram after Mrs Vardy told London’s High Court that she regretted comparing his private member to a ‘chipolata’ in a kiss-and-tell newspaper interview 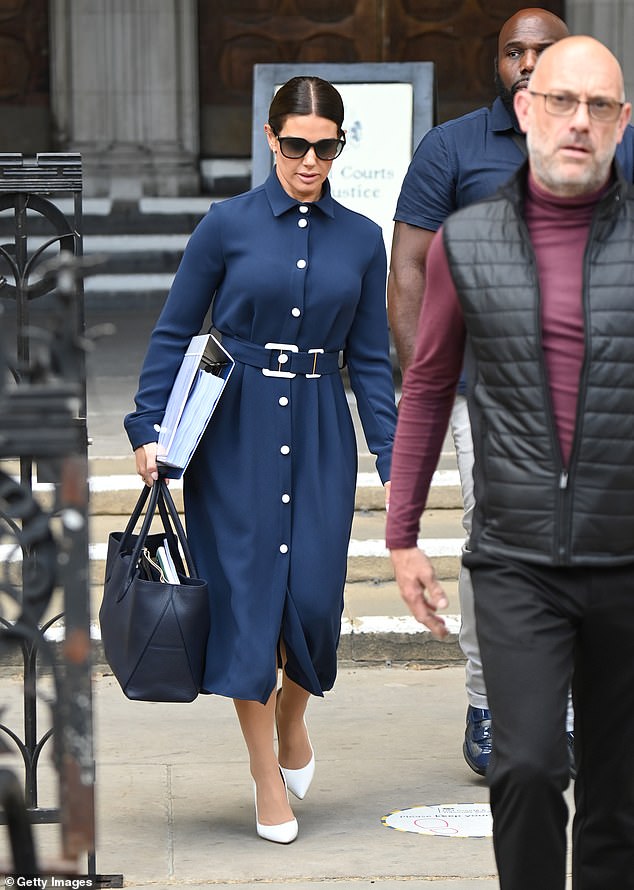 Mrs Vardy, 49, (pictured leaving court) said she had been ‘forced’ to take part in the News Of The World article by her ex-husband

Mrs Vardy was being cross examined by Mrs Rooney’s lawyer David Sherborne, when he asked her if she respected people’s privacy, to which she replied: ‘Yes, I do.’

He then asked her questions about an interview she gave to the News Of The World about her claimed sexual encounter with singer Peter Andre.

Mr Sherborne showed what appeared to an A3 print out of the article to Rebekah in the witness box before reading the headline: ‘Peter’s hung like a small chipolata, shaved, slobbery, lasts five minutes’.

The barrister read excerpts from the article, in which it was claimed Mr Andre had managed ‘just five minutes of sex with Rebekah’ and in which she said he had ‘the smallest trouser equipment I’ve ever seen’ that was like a ‘miniature chipolata’.

Mr Sherborne suggested to Rebekah that the News Of The World was the ‘highest circulating newspaper at the time’, read by some four million people, and asked her whether it was ‘respectful’ of Peter Andre’s ‘right not to share this information’.

She replied: ‘I was forced into a situation by my ex-husband to do this. It is something that I deeply regret… It is not nice to read and I understand why this is being used and to me this is mudslinging and I was also threatened with mudslinging by Mrs Rooney’s team.’

Asked the question again by Coleen Rooney’s barrister David Sherborne, Mrs Vardy said: ‘The circumstances around it were completely different.’

She later said she did not ask Mr Andre for his permission or tell him it was going to happen in advance. 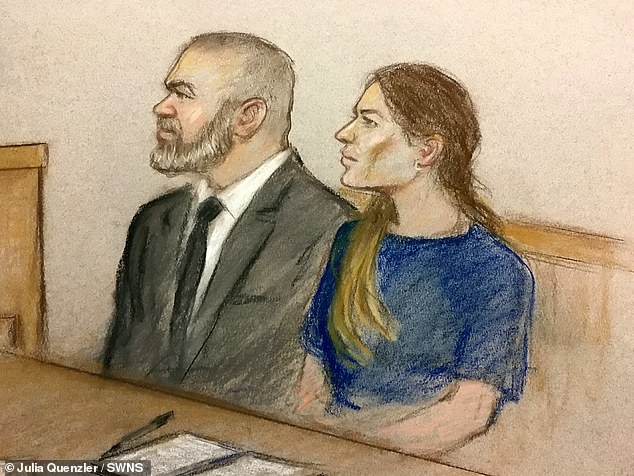 Artist impression of Wayne and Coleen Rooney at the Royal Courts of Justice in London, May 10, 2022.

Mr Sherborne asked: ‘Did you feel particularly strongly about the size of his manhood that it should be made public?’

Mrs Vardy replied: ‘It was something that I was forced to say.’

At the start of proceedings, Rebekah, the wife of Leicester City striker Jamie Vardy walked across the courtroom and passed within inches of Coleen, 36, and her Derby County manager Wayne, who both glanced in her direction for the first time all day.

Rebekah, 40, then took to the stand and swore on the Bible before being quizzed by Coleen’s barrister Mr Sherborne.

The WAGs have been at war since October 2019 after Coleen accused Rebekah of leaking ‘false stories’ about her private life, before claiming she had uncovered the culprit after carrying out a social media ‘sting operation’.

Coleen publicly claimed Rebekah shared three fake stories she had posted on her personal Instagram with The Sun, a claim Rebekah vehemently denied – leading her to launch the costly libel action which finally reached trial today.

This afternoon, Rebekah repeatedly denied leaking information to newspapers in the first few minutes of her cross-examination by Mrs Rooney’s barrister.

Rebekah told how she was on holiday in Dubai on October 9, 2019 when she saw Coleen’s post accusing her of leaking stories from a private Instagram. 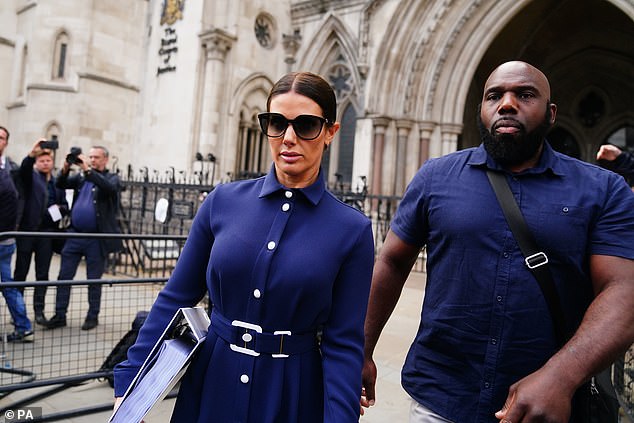 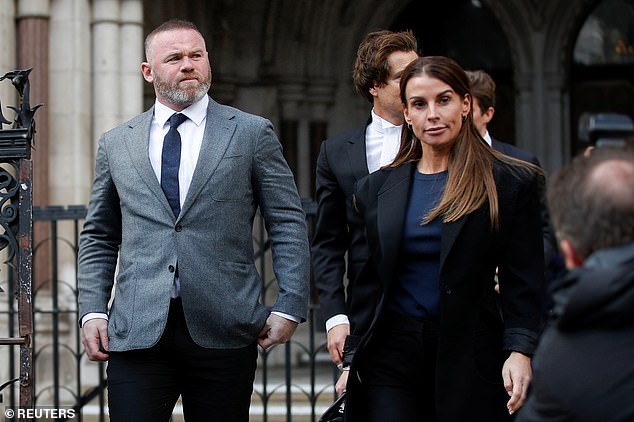 In a written statement, she said: ‘I felt extremely paranoid and like everyone in the beach club was looking at me. I thought I was going to pass out and Jamie decided we needed to leave straight away.

‘I do not fully remember the journey back to the hotel because I was almost hyperventilating. I knew that I had not done anything wrong.

‘I had not leaked those stories and I did not even know what posts I was supposed to have leaked.’

Rebekah, who was seven months pregnant at the time, continued: ‘I started getting really bad pains in my stomach when we got back to the hotel.

‘They were contraction type pains and I panicked that the baby was in danger. I made myself calm down and tried to think clearly. The first thing I did was ring my eldest daughter’s school.’

‘She was 13 years old then and children that age can be really cruel to each other. I needed to make the school aware of the situation so that they could try to protect her from bullying by the other children.’

‘All I cared about at that point was protecting my children. I knew that there must have been a mistake.’

She added: ‘I could not believe that Coleen had not called me before posting this accusation to the world.’