‘Pharma Bro’ Martin Shkreli has been ordered to pay nearly $65million to seven states that sued him for antitrust violations, in a decision that has also banned him for working from any pharmaceutical industry.

U.S. District Judge Denise Cote in Manhattan ruled after a trial where the U.S. Federal Trade Commission and seven states had accused Shkreli, the founder of Vyera Pharmaceuticals, of using illegal tactics to keep Daraprim rivals out of the market.

Now, the seven plaintiff states – New York, California, Illinois, North Carolina, Ohio, Pennsylvania and Virginia – are entitled to a payout but it’s unclear where the money will come from, and what the states will do with it if Shkreli ever pays up.

The states alleged in their case that Vyera hiked the price of Daraprim and illegally created ‘a web of anticompetitive restrictions’ to prevent other companies from creating cheaper generic versions. Among other things, they alleged, Vyera blocked access to a key ingredient for the medication and to data the companies would want to evaluate the drug´s market potential. 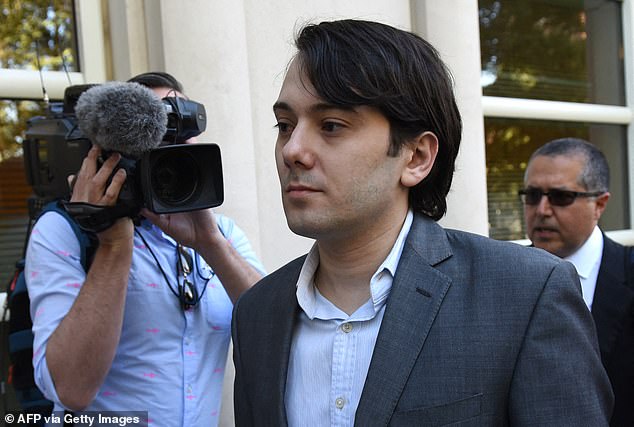 Shkreli drew notoriety in 2015 after hiking Daraprim’s price overnight to $750 per tablet from $17.50. The drug treats toxoplasmosis, a parasitic infection that threatens people with weakened immune systems.

In a 130-page decision, Cote faulted Shkreli for creating two companies, Vyera and Retrophin Inc, designed to monopolize drugs so he could profit ‘on the backs’ of patients, doctors and distributors.

‘Shkreli was no side player in, or a `remote, unrelated´ beneficiary of Vyera´s scheme,’ Cote wrote in a 135-page opinion.

‘He was the mastermind of its illegal conduct and the person principally responsible for it throughout the years.’

She said the Daraprim scheme was ‘particularly heartless and coercive,’ and a lifetime industry ban was needed because of the ‘real danger’ that Shkreli could become a repeat offender.

‘Shkreli’s anticompetitive conduct at the expense of the public health was flagrant and reckless,’ the judge wrote. He is unrepentant. Barring him from the opportunity to repeat that conduct is nothing if not in the interest of justice.

‘Envy, greed, lust, and hate,’ don’t just ‘separate,’ but they obviously motivated Shkreli and his partner to illegally jack up the price of a life-saving drug as Americans’ lives hung in the balance,’ said Attorney General James

‘But Americans can rest easy because Martin Shkreli is a pharma bro no more.

‘A federal court has not only found that his conduct was illegal, but also banned this convicted criminal from the pharmaceutical industry for life and required him to pay nearly $65 million.

‘This is on top of the $40 million we’ve already secured from Vyera.

‘The rich and powerful don’t get to play by their own set of rules, so I it seems that cash doesn’t rule everything around Mr. Shkreli.

‘New Yorkers can trust that my office will do everything possible to hold the powerful accountable, in addition to fighting to protect their health and their wallets.’

Coronavirus: 9 out of 10 people in the UK properly self-isolate after contact with a case