Dramatic photos captured the moment a two-month-old baby was saved from the wreckage of a helicopter after it crashed in Pennsylvania.

The helicopter crashed on Tuesday afternoon at around 1pm in the Drexel Hill neighborhood of Philadelphia in front of a church.

The infant was one of the four people on board in the chopper, which was en route to the Children’s Hospital of Philadelphia.

Following the crash, the baby girl was seen being rescued out of the wreckage by a member of the flight crew.

A woman was then seen rushing from the scene with the baby in her arms as the other survivors and flight crew members surveyed the damage.

The passengers all suffered non-life threatening injuries, which was deemed a ‘miracle.’

The pilot, who has been identified as Daniel Moore, was revealed to be in serious condition but is expected to recover. 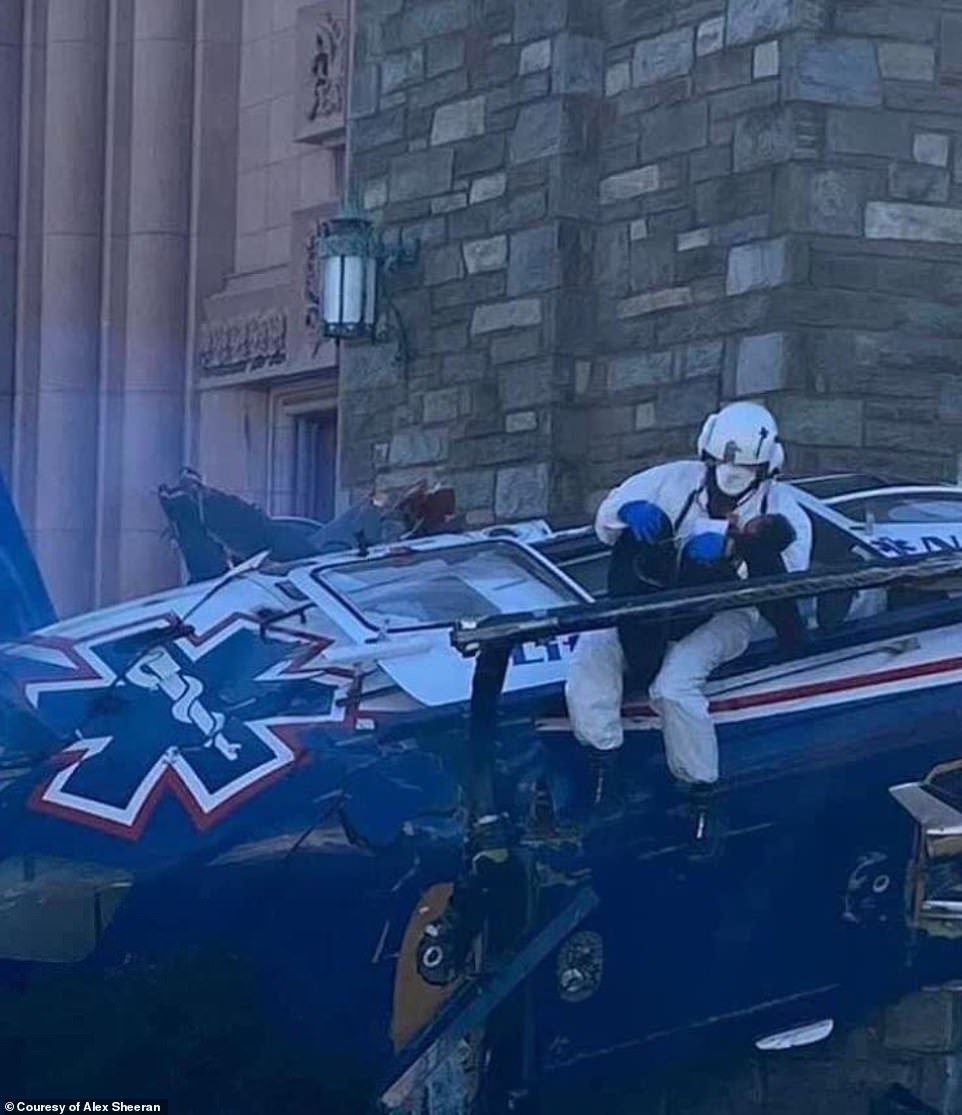 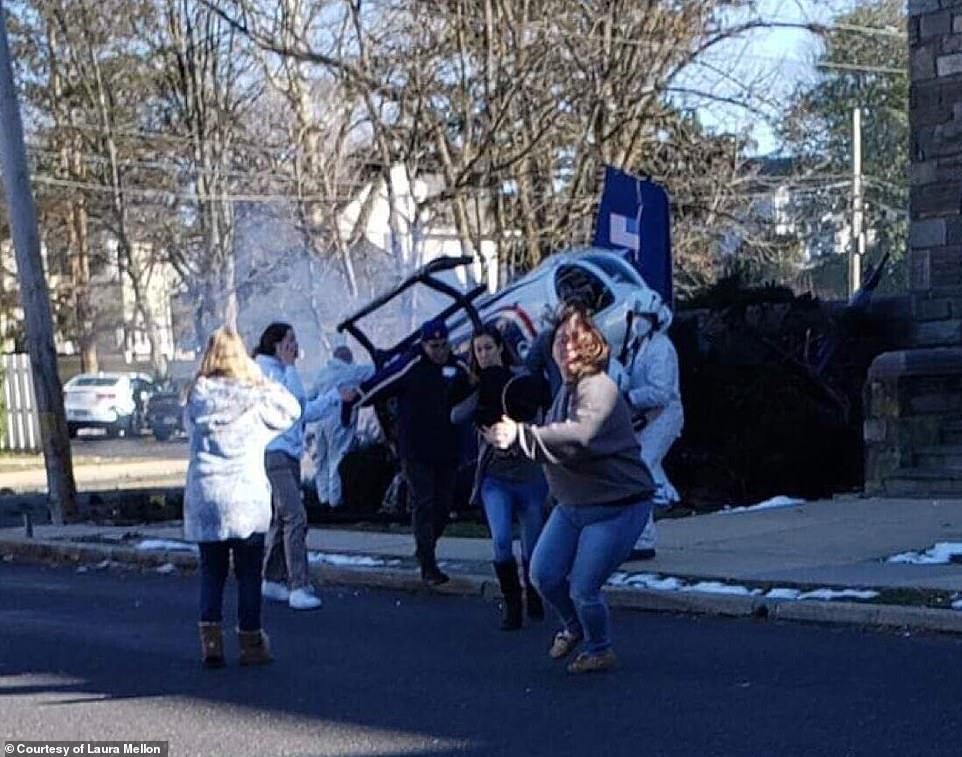 The baby, who was one of the four survivors, was taken from the scene by a woman after a member of the flight crew rescued her from the chopper

The investigation into the cause of the crash, which could possibly take up to a year, is still being determined.

‘We’re collecting witness and video evidence that describes the helicopter maneuvering erratically, for lack of a better term, and then descending here to the point you see behind me.’

Neighbors and onlookers had called emergency services after witnessing the terrifying crash.

Others reported hearing noises from the site of the wreckage, which had brought people out of their homes. 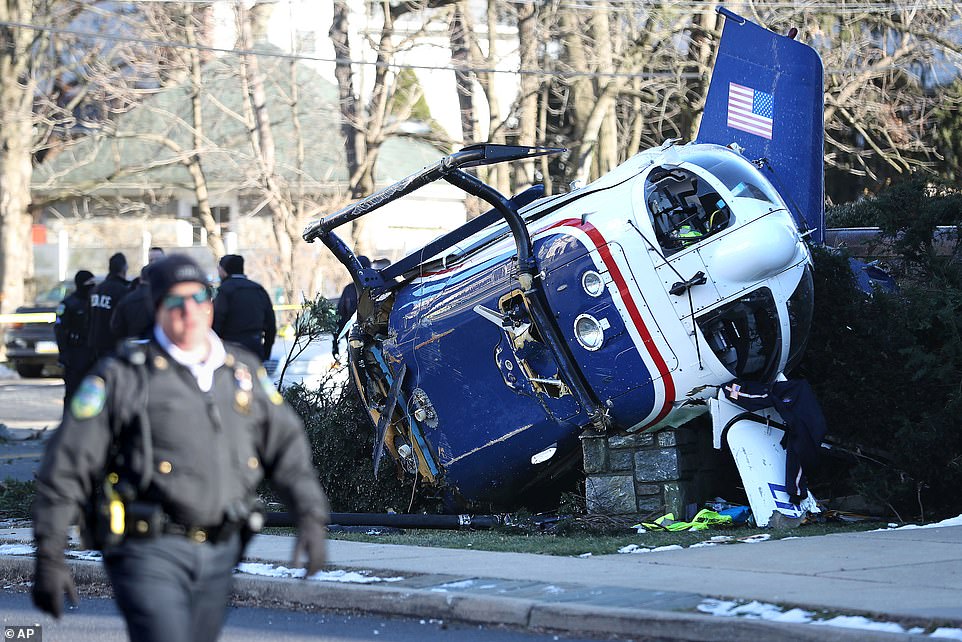 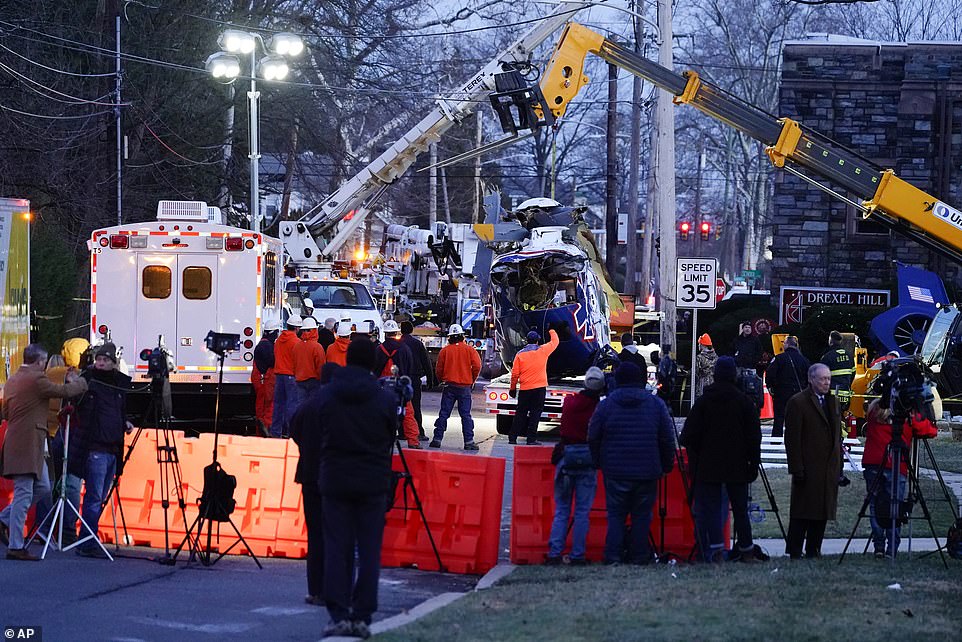 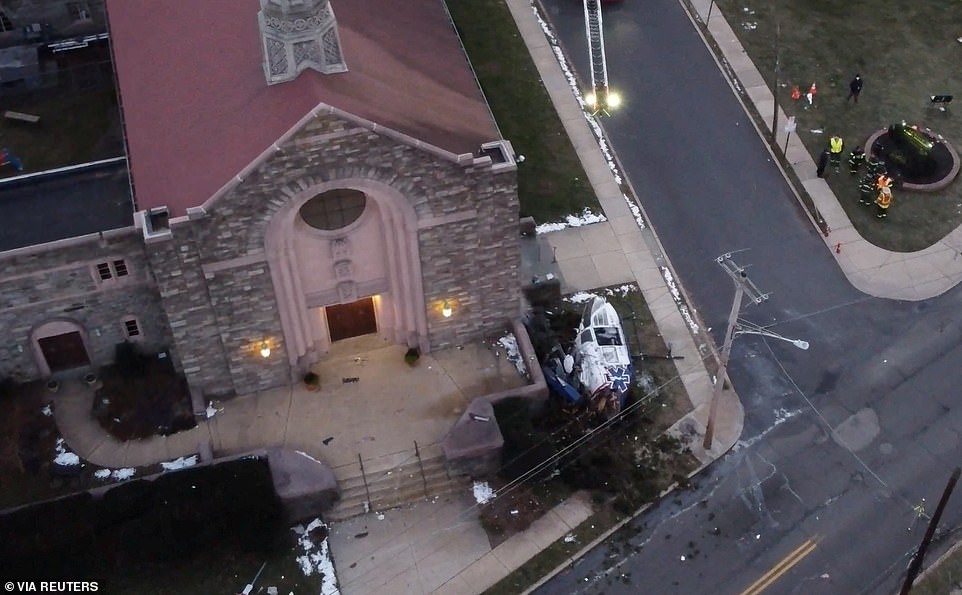 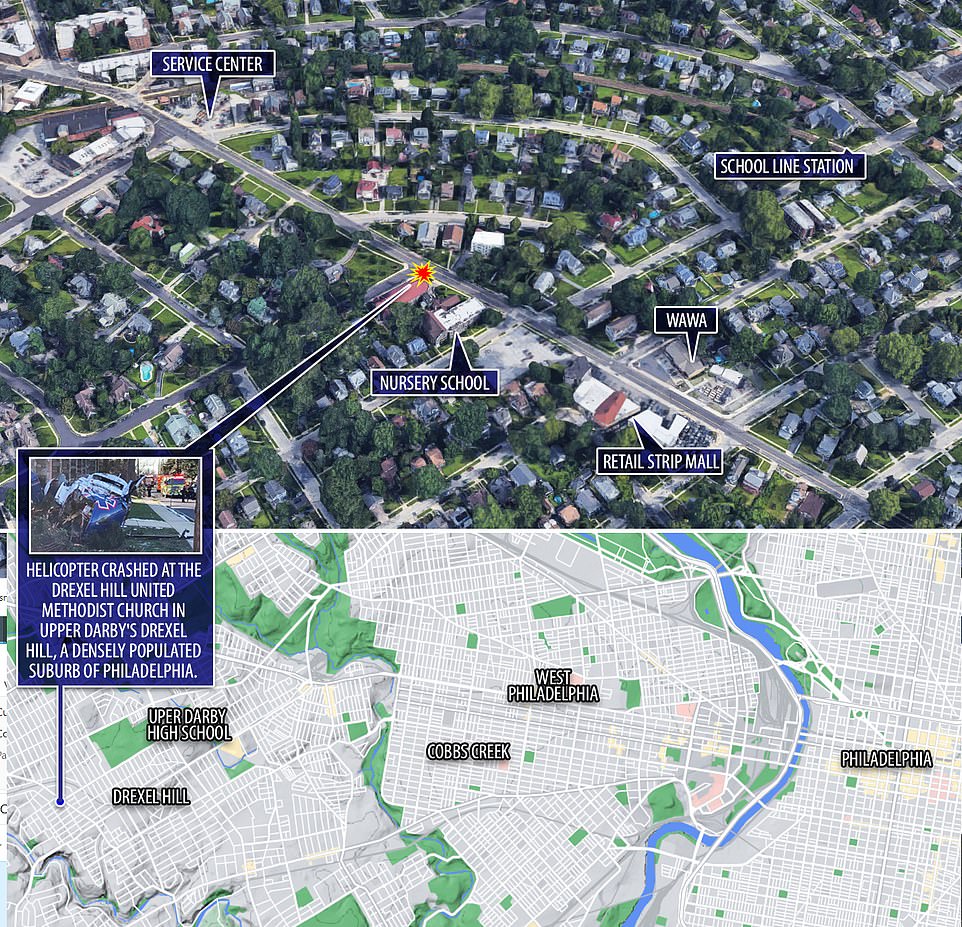 The helicopter landed in a residential area, not far from residential homes, a school, and local stores in the Drexel Hill neighborhood of Philadelphia

‘I see a woman, who’s just stopped dead in her tracks in her car and she’s on the phone with 911 and she goes, “It’s a helicopter, it’s a helicopter,”‘ Alexa Sheeran told CBS Philly.

‘And I was just like, “What?” I couldn’t wrap my head around what she was saying.’

Sheeran was the photographer who captured the endearing moment the baby had been saved from the wreckage. 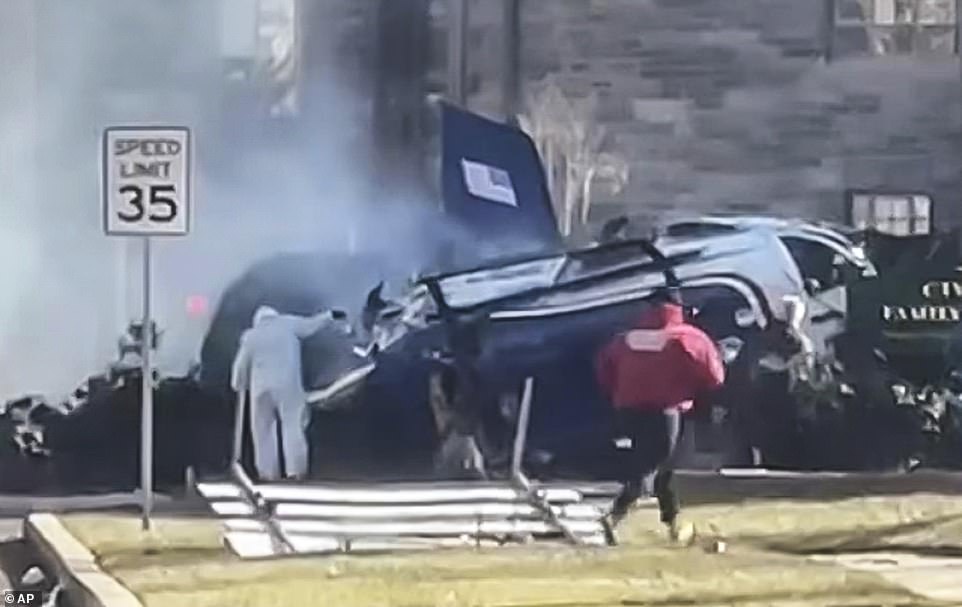 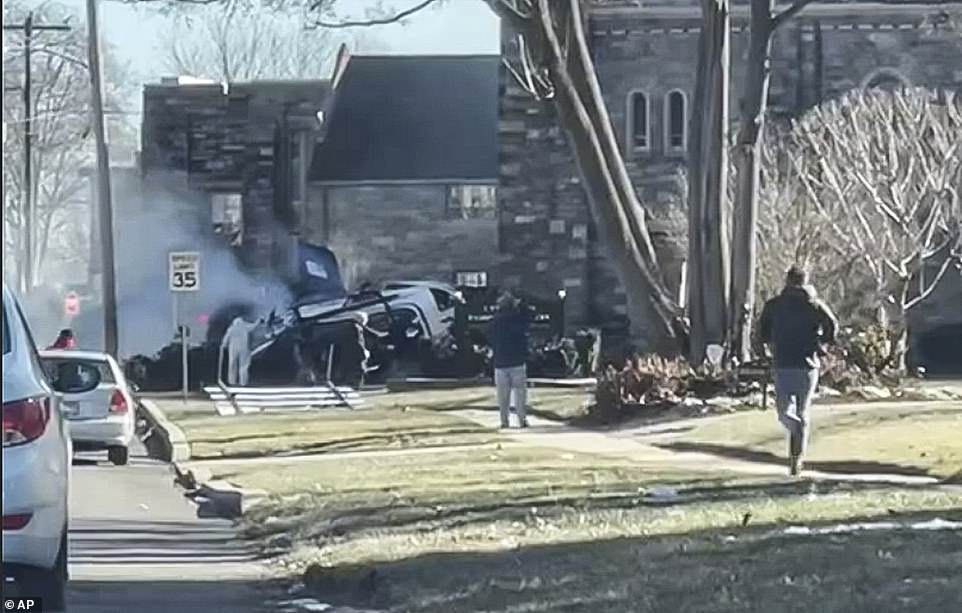 Emergency services were called to the scene following the crash 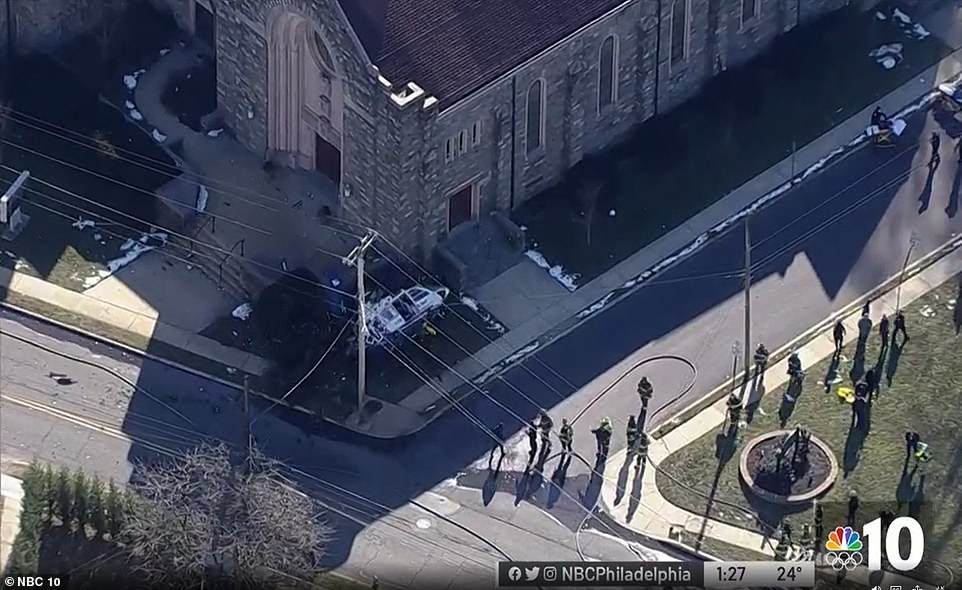 Another local woman had been driving by the scene when she noticed the crash and left her vehicle to help emergency crews.

‘I stayed with the medic who had the baby, which was absolutely phenomenal of him,’ Jewel Singles also told the network.

‘One thing about EMS is the job is never over. You try your best to follow through and that is exactly what we did, kudos to that guy, I would love to shake his hand again.’

‘The neighbors were a godsend, it takes a village, and the village absolutely did what they had to do to protect these guys and the baby.’

About 30 firefighters and seven medical units had arrived at the scene of the crash as well other members of law enforcement, according to KYW-TV.

‘Obviously, this pilot had a great command of the helicopter and was able to land it safely, took the best interest of the community in hand, Officer Derrick Sawyer told the network.

‘This was a miracle in the works where there were no lives lost and no property damaged.’ 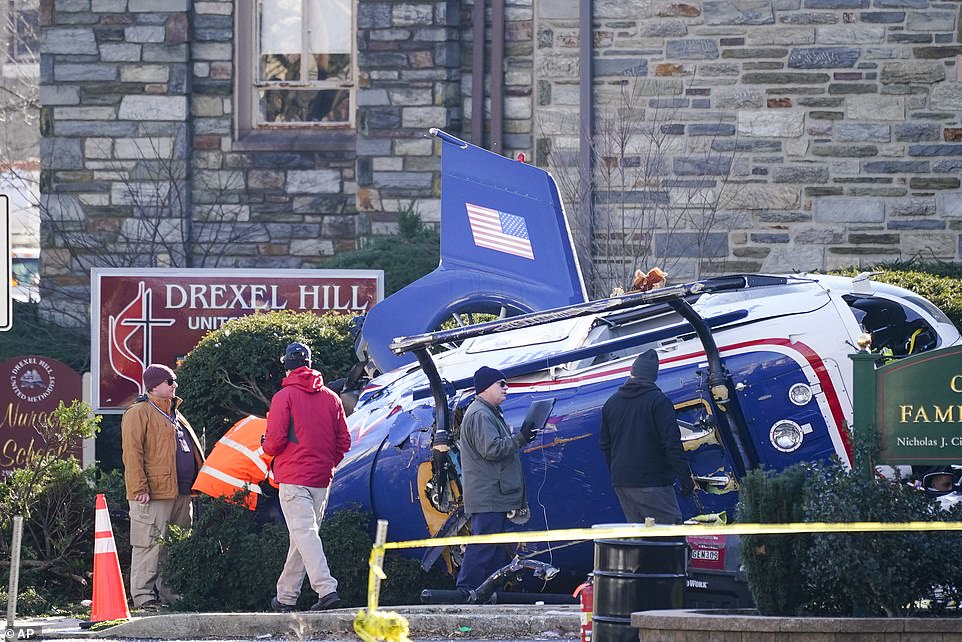 The effects of the crash were considered to be a ‘miracle’ as none of the passengers were seriously injured. A pilot from the helicopter is in serious condition but is expected to recover 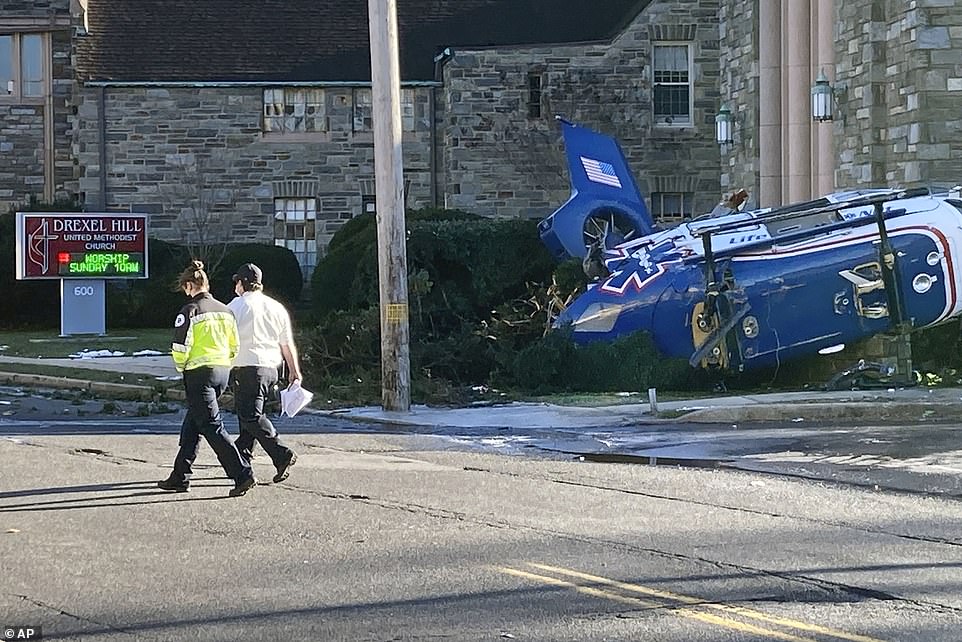 The twin-engine EC 135 chopper was based in Hagerstown, Maryland and was operated through a local medical service called LifeNet 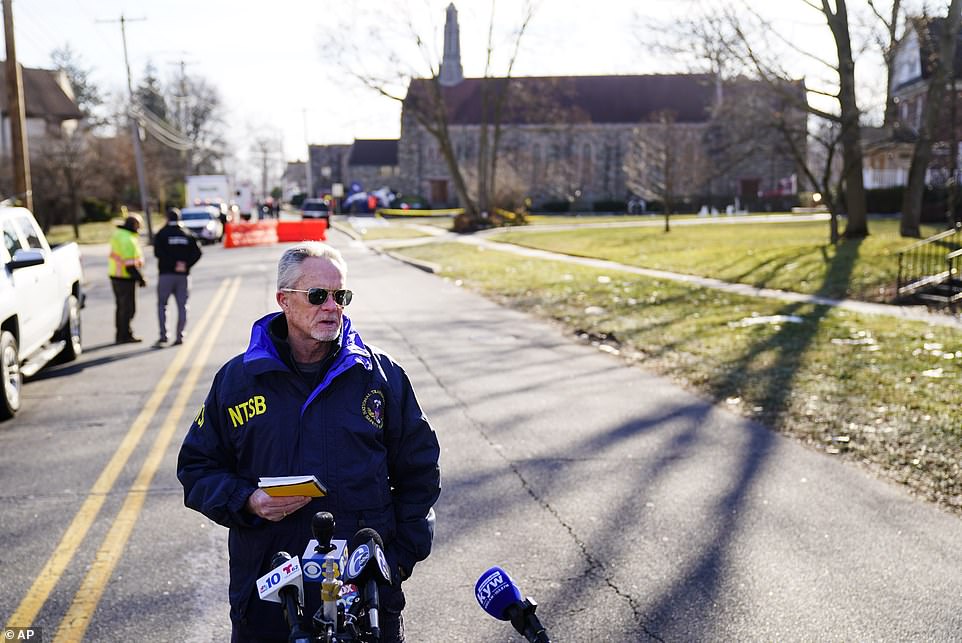 The twin-engine EC 135 chopper was based in Hagerstown, Maryland and was operated through a local medical service called LifeNet, aircraft owner Air Methods said in a statement.

The Federal Aviation Administration and the National Transportation Safety Board will investigate the cause of the crash.

‘Our team will cooperate fully with their efforts to assess the cause of this unfortunate accident,’ the statement said.

‘Privacy rights with regards to those on board the aircraft will be honored, and we will not be sharing any additional information.’

How can it be okay to work from home but still go to the office Christmas party?