The happy couple pose for photographs in front of a wooden wedding temple festooned with flowers and vines.

But their nuptials triggered a culture war storm when it emerged that Thompson’s Republican Congressman father attended the wedding at a historic nursery in northern Pennsylvania last month just three days after voting against a House bill that would guarantee federal protection for same-sex marriage.

Democrats accused Rep. Glenn Thompson of hypocrisy while Republicans insisted there was no need for federal protections for a right that was now well established.

As a result the couple have turned down all interview requests, saying that they simply did not want to carry the torch for campaigners.

At the time, Rep. Thompson’s office explained his opposition in blunt terms. 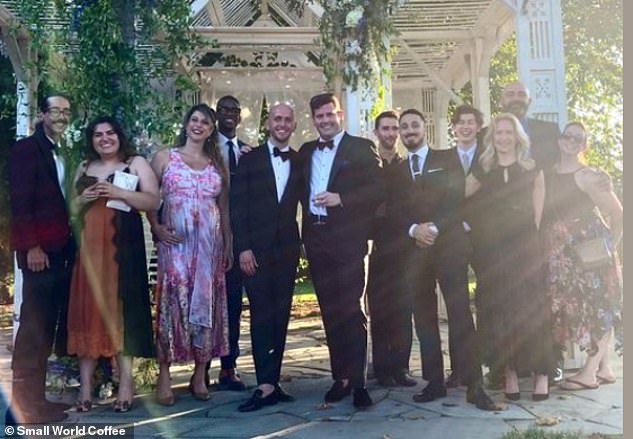 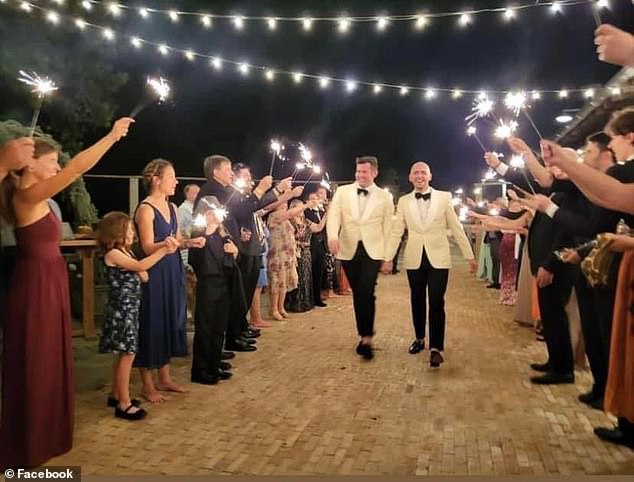 The wedding was held at the century old J. Franklin Styer Nursery in Northern Pennsylvania 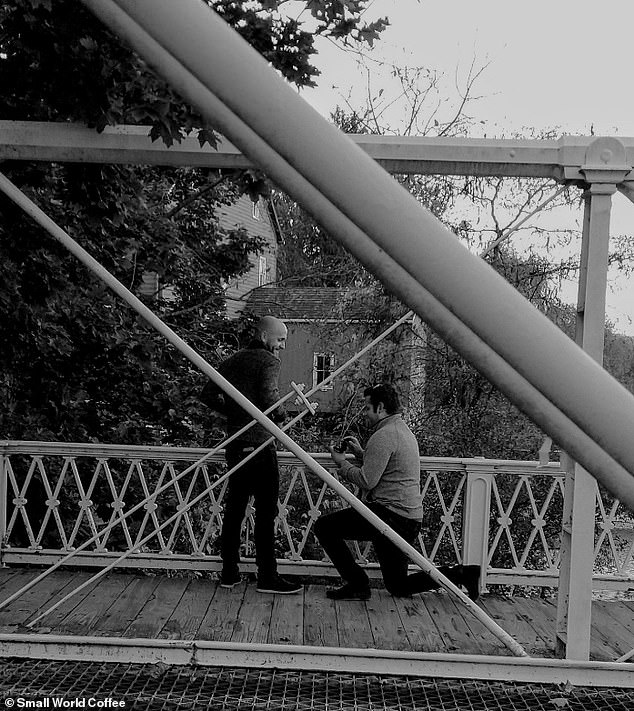 Green proposing to Thompson in an image shared by friends before the big day. The couple found themselves at the center of a culture war storm after details of their big day emerged 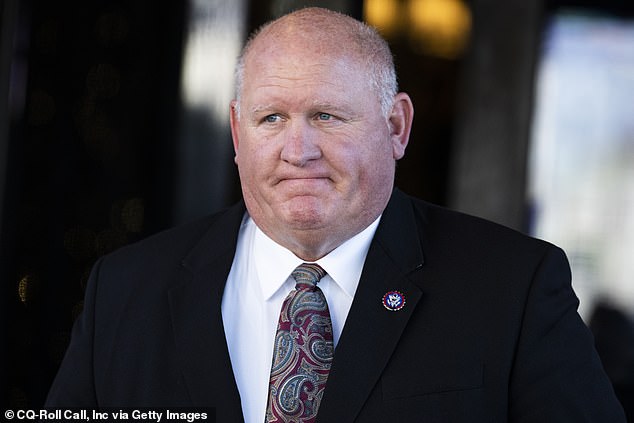 Rep. Thompson’s office described the Respect for Marriage Act as ‘ nothing more than an election-year messaging stunt for Democrats in Congress who have failed to address historic inflation and out of control prices at gas pumps and grocery stores’

‘This bill was nothing more than an election-year messaging stunt for Democrats in Congress who have failed to address historic inflation and out of control prices at gas pumps and grocery stores,’ his press secretary Maddison Stone told the local newspaper the Centre Daily Times.

Even so, his son, who works as a barista at a Princeton coffee shop, later told NBC News that Thompson attended the wedding at the century old J. Franklin Styer Nursery. When he ‘married the love of [his] life’ last month his ‘father was there,’ he said.

The ceremony was held beneath the wooden arch of an imported Indian wedding temple, with the grooms decked out in tuxedoes.

‘Congressman and Mrs. Thompson were thrilled to attend and celebrate their son’s marriage on Friday night as he began this new chapter in his life,’ said Stone after the July 22 ceremony.

‘The Thompsons are very happy to welcome their new son-in-law into their family.’

The result was a slew of allegations from the left that Thompson, 63, a longtime volunteer fireman and therapist and rehab services manager, was a hypocrite for voting ‘no’ on federal protections before celebrating his son’s marriage.

A wedding guest even leaked Thompson’s speech to make the point.

‘I think the word should definitely get out there,’ the attendee said, explaining their decision to give the audio to BuzzFeed News. ‘These politicians need to be exposed for who they really are.’

In his speech, he talks of the hopes and dreams he had for his son, and the family’s happiness at welcoming a new son.

‘We’re hoping that they find their way, find opportunity, they find inspiration,’ he said.

‘And as they grow and as they get a little older, we also hope and pray they’re going to find that one true love so that they have the opportunity to experience that: Someone to grow old with.

‘It actually goes beyond that, as parents – we love it when they find their one true love, especially when they become a part of our families then. That’s what we’re rooting for.’ 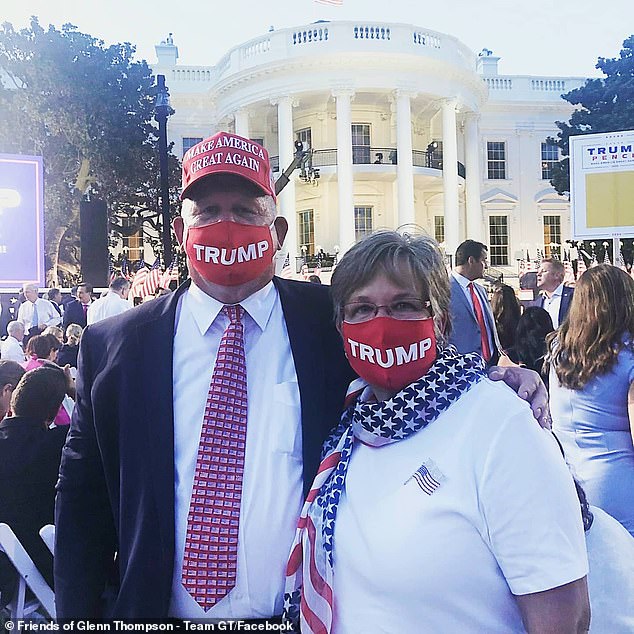 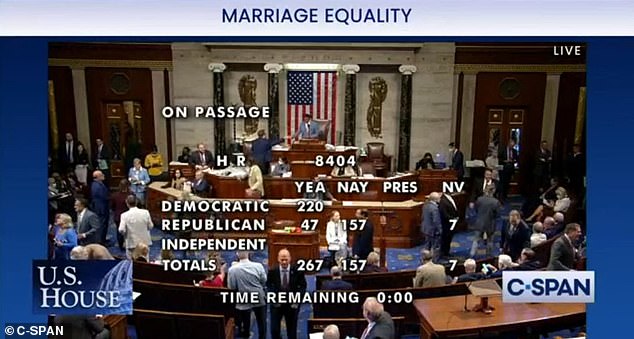 Thompson was one of 157 House Republicans who voted against the bill. Forty-seven Republicans joined their Democratic colleagues and voted in favor of the legislation

The Respect for Marriage Act is one of a number of moves made to protect rights that may be at risk after the Supreme Court threw out abortion protections enshrined by Roe v Wade.

It overturns the federal definition of marriage being exclusively between a man and a woman and codifies federal protections for same-sex couples.

Thompson was one of 157 House Republicans who voted against the bill. Forty-seven Republicans joined their Democratic colleagues and voted in favor of the legislation.

‘If gay couples want to be as happily or miserably married as straight couples, more power to them. Trust me, I’ve tried it more than once,’ Rep. Nancy Mace, R-S.C., another yes, tweeted after the vote.

The bill has now passed to the Senate where it faces an uphill battle to find 10 Republicans who will vote with Democrats to break the filibuster.

Some Republicans say gay marriage is now so well established that it does not need federal protections.

Sen. Ted Cruz, R-Texas, for example last month said the Supreme Court had been wrong to guarantee the right to same-sex marriages in its 2015 Obergefell v. Hodges ruling

‘Marriage was always an issue that was left to the states,’ Cruz said in a YouTube posted on July 16.