Suspected bike jackers have been pictured speeding away with a bicycle on a motorcycle after the theft of three high-value bicycles in six days.

The latest robbery comes after professional cyclist, Alexandar Richardson, 31, was knocked off his £10,000 bike and chased on foot by four thieves carrying 15-inch machetes last week as he trained in Richmond Park.

Two of the attackers were on motorbikes, one of which drove into him before dragging him 109 yards through the park.

Mr Richardson was then threatened with the jackers’ 15-inch machete and ordered to give over his high-end training bike.

Police confirmed that another cyclist in Richmond Park had his bicycle stolen the previous day after he was approached by two males on e-scooters although they have not said whether the robberies are linked.

Now a third ‘verified attack’ has been reported with the suspected thieves  photographed scarpering off the scene holding a bike on their shoulders. 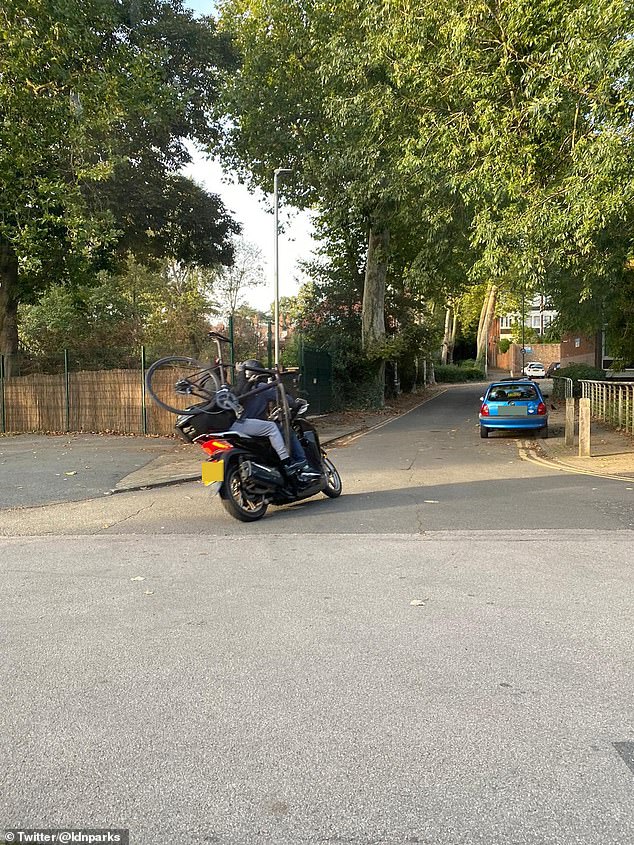 Campaign group The Department of Parks and Recreation shared two pictures on Twitter showing suspected bike jackers rushing off the scene after the theft of what appeared to be  another high-end bicycle. 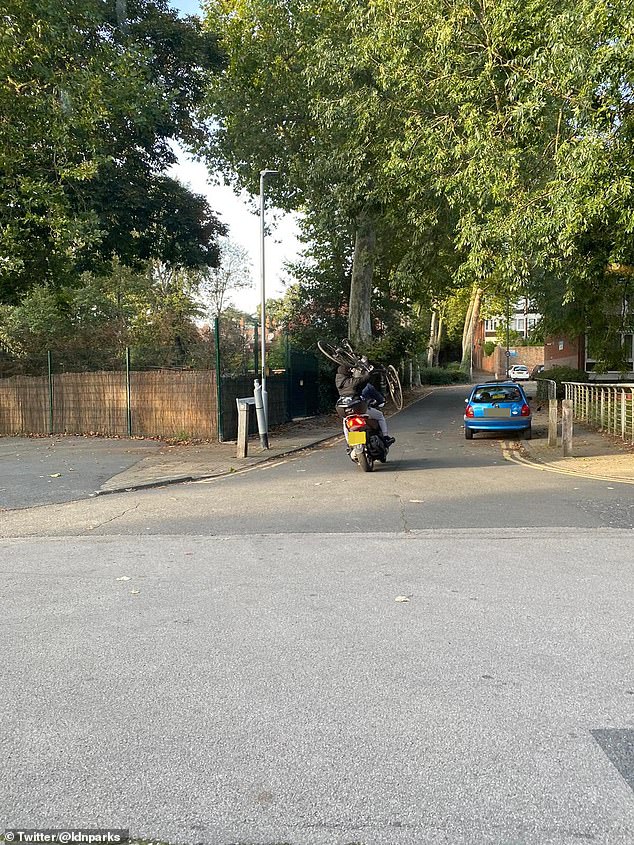 The group reported that this latest attack occurred outside Richmond Park, close to Roehampton Gate.

Campaign group, The Department of Parks and Recreation, which states it is fighting ‘to reclaim The Royal Parks from motorists’ tweeted two pictures showing two men on a motorbike, one with a bicycle on their shoulders.

They reported that this latest attack occurred outside Richmond Park, close to Roehampton Gate and called for the gates to the park to be closed to motorists.

They tweeted: ‘The news that this latest attack occurred just outside the park, does not alter our demand that the gates be shut to protect park users while these criminals are at large.

These attacks can be stopped immediately and simply, by closing the park gates. If the gates are not closed, the @theroyalparks will shoulder some responsibility should any further attacks occur in the near future. https://t.co/l7FIOMiLn7

‘We know these criminals are carrying large bladed weapons.

‘The Royal Parks must act swiftly to protect park users and avoid further attacks or even injuries. The gates to the park must now be closed to motor traffic.’

Mr Richardson, who rides for professional cycling team Alpecin-Fenix, shared his horrifying experience last Thursday on Instagram with a picture of his nasty scrapes to his legs. 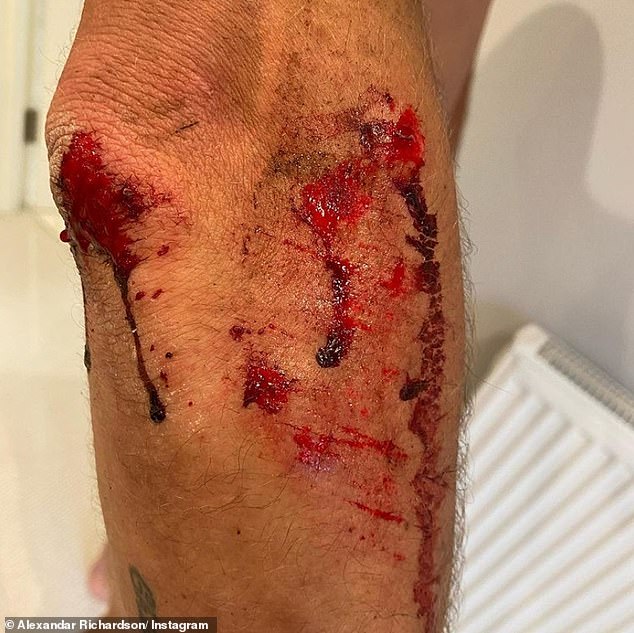 Richardson was dragged along the ground for 109 yards in Richmond Park and suffered nasty cuts to his legs before letting the attackers take the £10,000 bike

‘Was finishing my training around 3pm when two motorbikes with four men and balaclavas started following me.

‘I knew exactly what they wanted – to take my bike. I started to think what the best thing to do was.

‘I turned around at East Sheen Roundabout and started riding full speed to the café about 500 metres away.

‘They simply rode one of the motorbikes into me at 60kph. 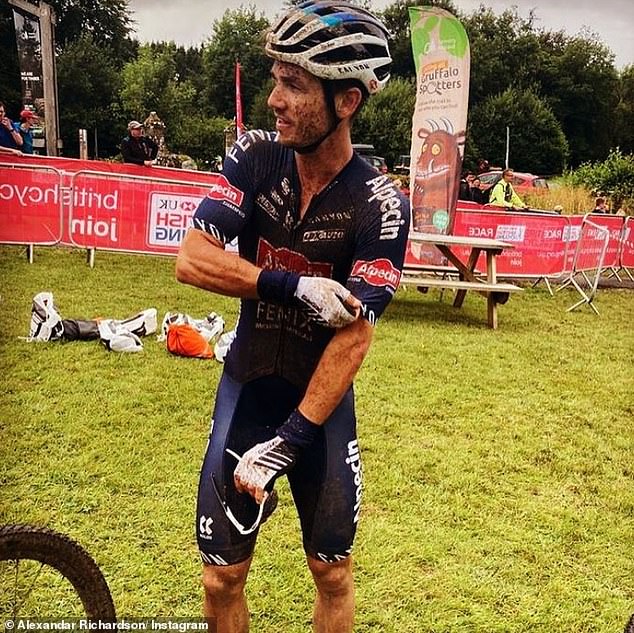 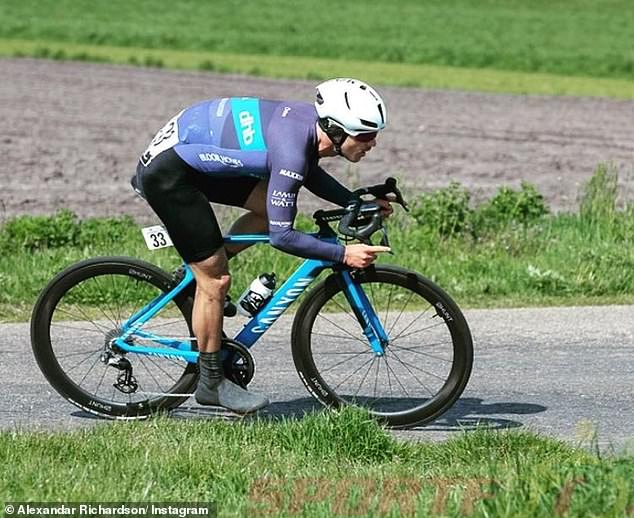 Richardson did what he could to hold onto his £10,000 bike but it was taken from him at knife point before the masked men quickly sped off

‘I came off the bike and the first motorbike lost control. I held onto my bike, however, the second motorbike then dragged me and the bike along the floor for another 100 metres.

‘After this they pulled out a 15-inch machete, at which point I thought I better let the bike go.

‘I’m pretty cut up and bruised with a swollen hip but tomorrow is another day.

‘Please be careful in the area and note this is becoming a common occurrence in parts of London.

‘The police have taken their notes down as armed robbery and hopefully the criminals are found.’

Last year, a total of 74,573 bikes were reported stolen in England and Wales, with Greater London having the highest rate of crime in the country.

A Met Police statement read of the attack against Mr Richardson: ‘Police were called at 16:01hrs on Thursday, 7 October to reports of a robbery that had occurred near to the Roehampton Gate entrance of the park.

‘It was reported that a man aged in his 30s was cycling through the park when his bike was rammed by four men who were travelling on two mopeds. 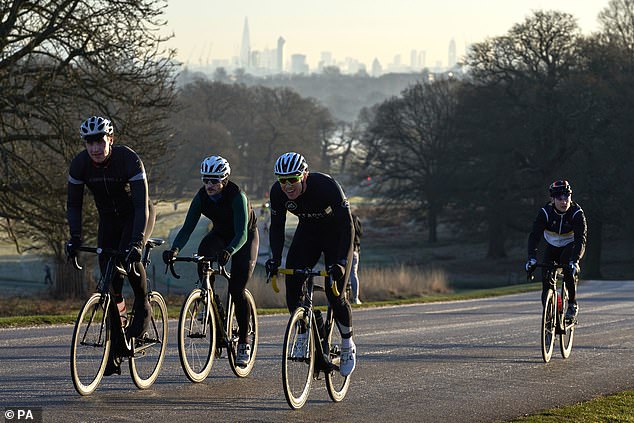 ‘This caused the victim to fall to the ground. The group then threatened the victim with a machete before riding off with the bike towards Danebury Avenue.

‘The cyclist did not require hospital treatment, although he did suffer injuries to his arm as a result of trying to keep hold of the bike.

‘Officers attended at the time and took an initial statement from the victim. They carried out a search of the nearby area but no suspects were found.

PC Ian Croxford, from Operation Venice, the Met’s response to moped enabled crime, said: ‘Although the victim did not suffer serious injuries this was an incredibly frightening experience and we will do all we can to track down those responsible.

‘I’m asking people who were in Richmond Park on Thursday afternoon to check for any video they may have showing a group of four men on mopeds. That could be mobile phone footage, dashcams or cycle helmet footage.

‘I’d also ask people living or working nearby to check any local CCTV, dashcam or doorbell footage as this could be key to us identifying these dangerous individuals.’

There goes the NeighBEARhood! Trio of cubs and their mom explore evacuated Lake Tahoe street