The pilot of a small twin-engine plane is heard in a 40-minute recording asking air traffic control for help to making an emergency landing before his 23-year-old co-pilot jumped or fell from it at 3,500-feet.

Charles Hew Crooks did not have a parachute on before he plunged to his death in North Carolina on Friday, officials said.

In the 40-minute exchange between the unidentified pilot and air traffic control, there is no mention or hint of Crooks falling from the plane.

The pilot can be heard saying: ‘Emergency, we’ve lost our right wheel. We would like to proceed to Raleigh and make a landing at Raleigh.’

He adds:  ‘We have two persons on board. We have enough fuel on board that will last us for the next four hours.’

‘More clarification, did you try landing on Raeford West?’ he asks. ‘Did it [the wheel] fall off while still in the air?’

‘We were attempting to land,’ the pilot said. ‘We made contact with the ground and had a hard landing and decided to go around and at that point we lost the wheel.’

When air traffic control questioned how they intended to land, the pilot said: ‘Going to go in as slow as we can and I guess we are going to put it on the belly.’ He then repeated that the plane’s right wheel had fallen off.

Once the plane hit Runway 5R-23L at Raleigh-Durham International Airport around 2.40pm, there were multiple law enforcement agencies standing by.

There was one person on the plane, but no sign of Crooks, the second co-pilot. 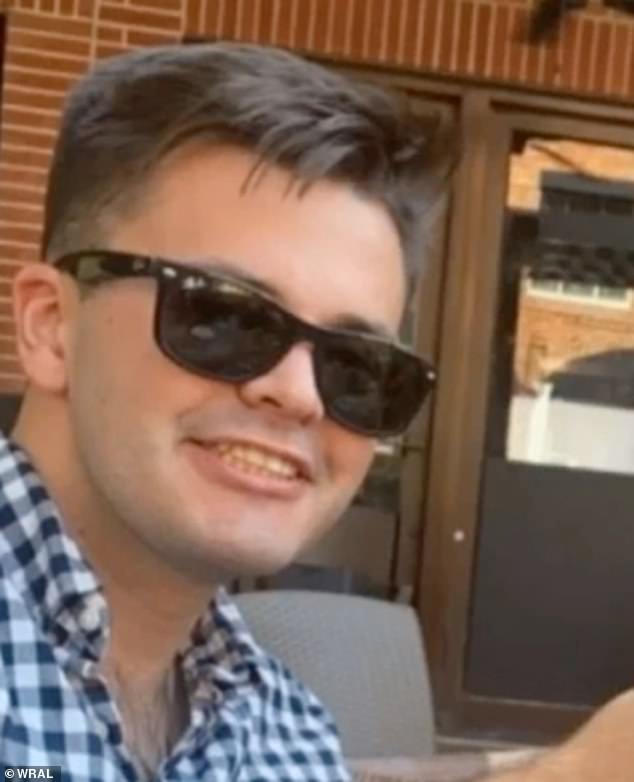 Charles Hew Crooks , 23, died after falling or jumping from a small twin-engine plane on Friday as it went to make an emergency landing in Raleigh, North Carolina 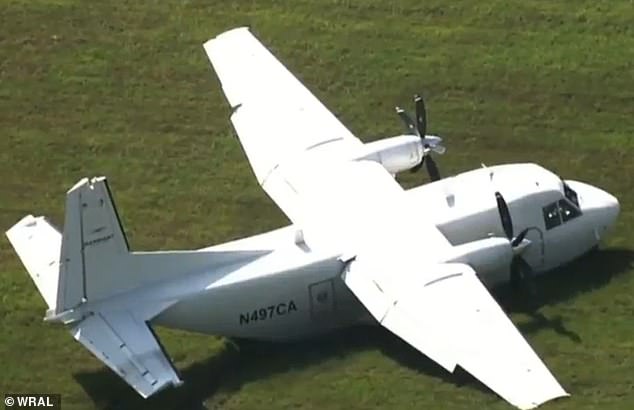 The plane was forced to make an emergency landing after losing its right wheel during a previous landing attempt. The unidentified pilot on board is heard asking air traffic control for help in a 40-minute recording 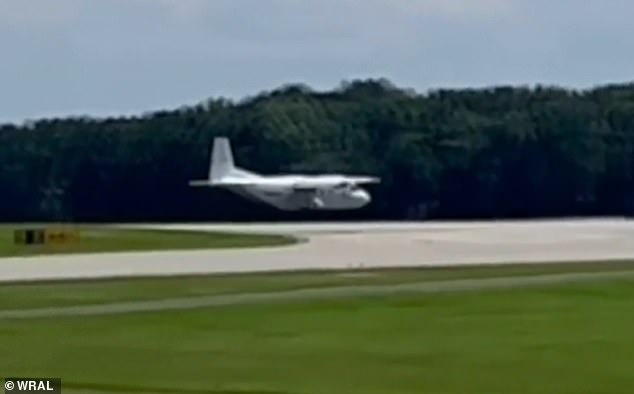 When asked how the pilot was going to land the plane, he said: ‘Going to go in as slow as we can and I guess we are going to put it on the belly’ 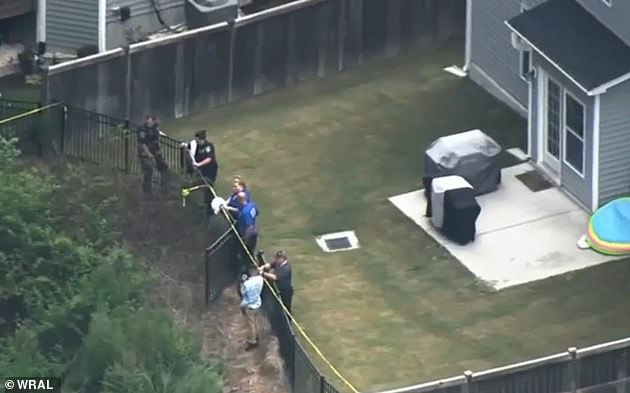 Crooks’ body was found 30 miles south of Raleigh-Durham International Airport in the trees of a property in Fuquay-Varina, North Carolina

The pilot, whose name has not been released, sustained minor injuries. He was taken to Duke Hospital and released late Friday night.

He told authorities that Crooks had jumped out of the plane before the emergency landing attempt, and it was believed he may have jumped toward a body of water.

Investigators said Crooks either fell or jumped out of the plane without a parachute, WRAL News reported

But Crooks’ body was later found about 30 miles south of the Raleigh-Durham International Airport. He’d landed in trees on a property in Compaign Cove in the town of Fuquay-Varina, North Carolina.

The family living on the property said they head a loud thud, and called police.

Hew Crooks’, the 23-year-old’s father – said that flying was his son’s ‘lifelong dream’.

He said his son was a former flight instructor and was certified to fly in all types of conditions.

Hew Crooks told WRAL that Crooks had recently told him how ‘he wouldn’t trade places with anybody in the world. He loved where he was.’ 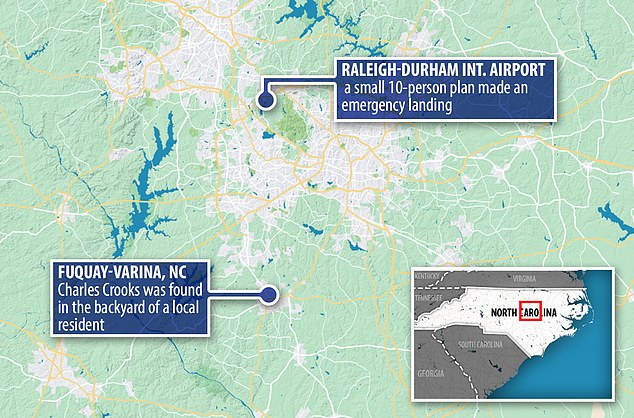 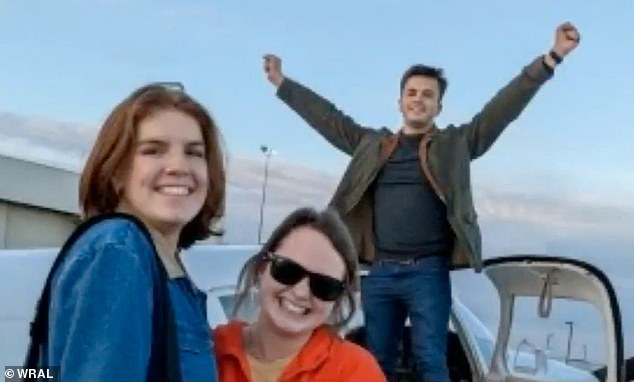 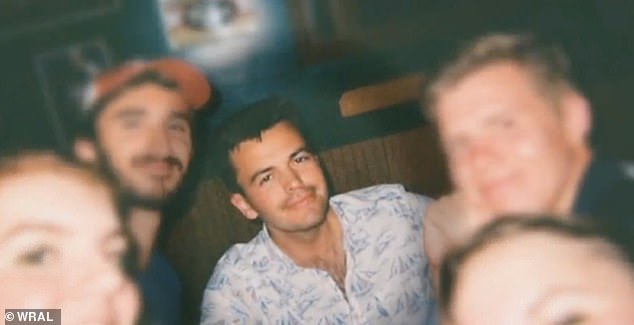 Hew Crooks’, the 23-year-old’s father – said that flying was his son’s ‘lifelong dream’. He said his son was a former flight instructor and was certified to fly in all types of conditions 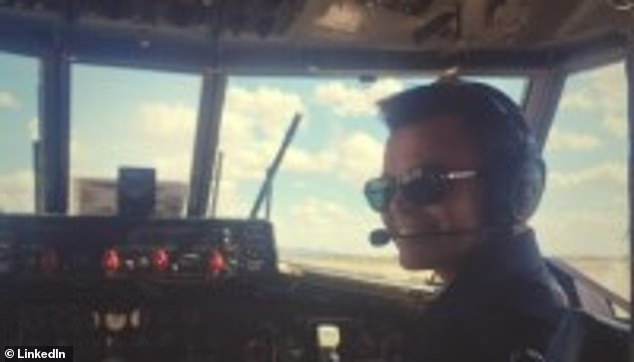 A photo of Crooks from his LinkedIn page. The young pilot  wrote that he joined Rampart Aviation in March 2022. His role was pilot, second in command

The aircraft was owned by Colorado-based Rampart Aviation. The company did not respond to DailyMail.com’s request for comment. Crooks started working at the company five months ago, according to his LinkedIn.

The  National Transport Safety Board (NTSB) is investigating the incident. When asked about the circumstances leading to Crooks death, spokesman Keith Holloway said: ‘No decision has been made at this point.’

‘Currently, the NTSB is working with the FAA collecting information evaluating the damage of the aircraft and circumstances to determine the extent of an NTSB investigation,’ NTSB spokesperson Keith Holloway told DailyMail.com on Sunday.

The small plane had a capacity of around 10 passengers and was not making a commercial flight at the time of the incident.

On Friday at a press conference, Darshan Patel, operations manager for Wake County emergency management confirmed that Crooks did not have a parachute on and it was unclear at the time how high the plane was when the young pilot exited.

The plane took off from Raeford, a city in Hoke County, before it made the emergeny landing on Runway 5R-23L at Raleigh-Durham International Airport at around 2.40pm.

Crooks was a 2020 graduate of Bucknell University in Pennsylvania. On his Instagram there is a photo of him in a plane with the words: ‘I’m just here to fly the planes.’

Miami condo collapse: First victim is identified as the mother of boy, 15, rescued from the rubble