Married police officer used his position to manipulate domestic abuse victim as he asked her out for cocktails and messaged her up to 18 times a day, misconduct panel hears

A married police officer ‘used his position’ to ’emotionally manipulate’ a vulnerable domestic abuse victim and asked her out for cocktails, a misconduct panel heard.

The police constable is accused of ‘coercing and controlling’ the young woman and ‘sexualising’ their relationship under the guise of him assisting with her abusive partner’s criminal case.

The domestic abuse officer bombarded the woman with inappropriate messages up to 18 times a day, hugged and kissed her on the cheek, and invited her to his home, it was alleged.

However, the identity of the middle-aged officer cannot be revealed as he has been granted anonymity at a misconduct hearing at Hampshire Constabulary HQ in Eastleigh.

The woman, named only as Female A, said his behaviour has made her ‘paranoid about male police officers’ and scared to call 999 as ‘they are just normal people and do bad things’.

Prosecuting barrister Victoria von Watcher said Officer A was ‘sexually motivated’ and his messages ‘do not display the correct degree of relationship between him and a professional client’. 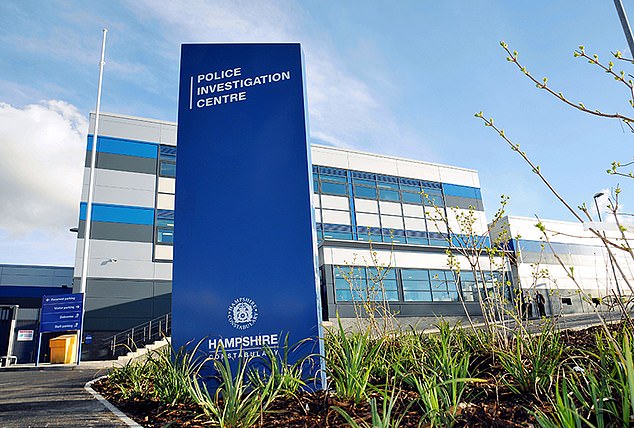 ‘It’s important to remember she was a vulnerable person, a victim of domestic abuse, highly suggestible, and to be treated with particular care’, she said.

‘The reality is that he treated her in a way that he would not have treated a male; in coercive, controlling behaviour and in the way he addressed her.

After the officer’s alleged behaviour in 2019 came to light, the woman was interviewed by officers and told them: ‘It’s made me paranoid, especially around male police officers.

‘If I need help now I would hesitate to call the police as they are just normal people and they do bad things.

Describing her mental state when Officer A was contacting her, she added: ‘I was a big mess emotionally and physically.

The hearing was told Officer A invited her to his home in Portsmouth claiming he would provide an ‘update’ about the case from there as he had ‘window fitters’ round.

But, she said she realised things were ‘weird’ when he explained the workmen weren’t going to be there.

She said: ‘I didn’t see the flirtiness before he invited me around his house because I would not have gone if I had.

‘My whole life was falling apart and I didn’t notice what he was doing because I was being naive – I nearly died a few weeks before.

‘The way he was acting, I think he had a romantic interest. You don’t invite someone out for dinner like that, that’s a date – it wasn’t a decent thing to do.’

Officer A also allegedly inappropriately accessed police files and passed on information about her partner’s restraining order then sought to dissuade her from having the order removed by sending ‘coercive’ messages and speaking to her mum.

Ms von Watcher said: ‘We say this was done to blacken the name of [Female A’s partner] and ingratiate himself with Female A or at the very best control her and manipulate her actions so she did what he wanted her to do.’

AstraZeneca vaccine will be made in Australia