Jen Psaki says Gov. Greg Abbott banned vaccine mandates because of ‘politics’, says White House will STILL force rules on businesses and says it has nothing to do with worker shortages or the Southwest strike

On Monday the Texas governor banned all Covid-19 vaccine mandates through executive order, after President Biden had issued his own executive order requiring employers with over 100 workers to mandate the jabs.

‘Governor Abbott’s executive order banning mandates and, I would also note announcement by Governor DeSantis this morning essentially banning implementation of mandates fit a familiar pattern that we’ve seen of putting politics ahead of public health.’

Asked why Abbott did this, knowing that federal law supersedes state, Psaki had a one word reply: ‘Politics.’

‘I think it’s pretty clear when you make a choice that’s against all public health information and data out there it’s not based on what is in the interest of the people you are governing it’s perhaps in the interest of your own politics,’ she added when asked to elaborate.

Over the weekend, Southwest Airlines canceled over 2,000 flights and insisted they had all been nixed because of weather.

Furious passengers said that they were told in airports that the cancellations were due to Southwest employees walking out in protest at the airline’s decision to enforce COVID-19 vaccinations.

But the airline said that that was not the case, and said poor weather in Jacksonville, Florida, sparked a knock-on effect.

Psaki, too, claimed the cancelations ‘were completely unrelated to vaccine mandates.’

‘In another instance of federal overreach, the Biden Administration is now bullying many private entities into imposing COVID-19 vaccine mandates,’ Abbot wrote in an executive order.

At least several thousand people have already been fired from their jobs for refusing to comply with vaccination requirements.

The governor’s order, according to the document, also supersedes any municipal or county mandate that would allow entities to impose such mandates

He said that the mandates were ‘causing workforce disruptions that threaten Texas’ continued recovery from the COVID-19 disaster.’ 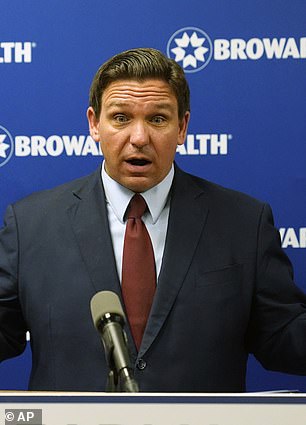 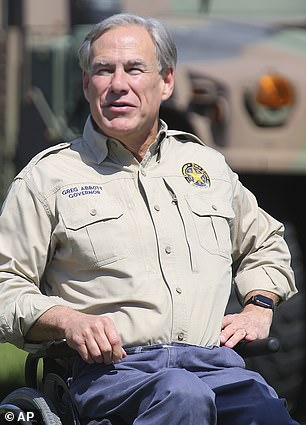 In the order, he encouraged residents to get the vaccine, but said that it ‘must always be voluntary for Texans.’

This is the governor’s second executive order banning vaccine mandates, where back in July he issued such a directive that also banned mask mandates.

Abbott’s latest order states that ‘no entity in Texas’ could compel proof of vaccination by any individual, including employees or customers. He called on state lawmakers to take up the issue in an upcoming special session.

DeSantis remarked earlier Wednesday that he could take similar action to block vaccine mandates from taking effect by shielding workers who refuse to comply from being fired.

DeSantis had earlier issued an order banning vaccine passports, and on Tuesday fined the county of Leon more than $3.5 million for violating the ban. DeSantis had threatened to fine local governments $5,000 per fired employee if they tried to purge the unvaccinated.

Biden issued the vaccine directive last month, but it has yet to take effect as the emergency rule is still being developed by the Labor Department’s Occupational Safety and Health Administration (OSHA). Officials expected it to take several weeks, and still there has been no update.

‘There isn’t a big historic precedent for this, and we want to get it right,’ Psaki told reporters Tuesday, asked why there was a delay.

In the meantime the White House has been urging businesses to implement mandates on their own.

Queensland Police urgently search for 14yo girl who went missing at Kirwan, Townsville, on Wednesday