Qantas has been labelled a ‘national disgrace’ after cancelling a flight that ruined the reunion of two asylum seekers who were separated nine years ago.

Betelhem and Ismail were fleeing war-torn Ethiopia and Somalia when they met and became friends on a boat bound for Australia in 2013.

Once their boat reached Australia, the pair were separated at the country’s two offshore immigration detention centres – Betelhem was sent to Nauru while Ismail was detained on Manus Island, Papua New Guinea. 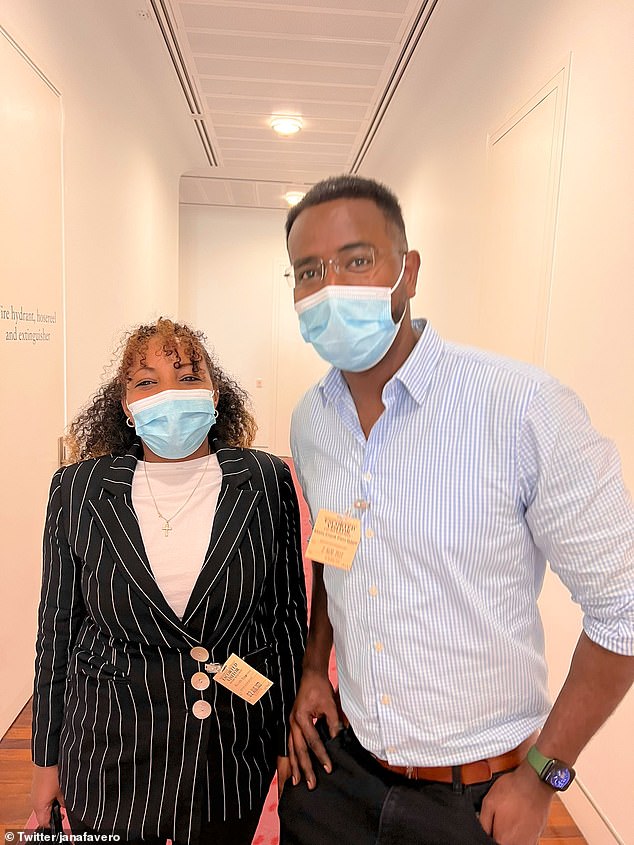 Betelhem (left) and Ismail’s (right) emotional reunion was ruined when Qantas cancelled their flight. The pair first met on a boat in 2013 but were sent to separate offshore detention centres

On Tuesday, Betelhem and Ismail were scheduled to meet on a flight from Melbourne to Canberra but their emotional reunion was ruined after Qantas cancelled and put them on separate flights to the nation’s capital.

The pair were part of Asylum Seeker Resource Centre’s (ASRC) lobbyist group meeting in Canberra to discuss legislation which was introduced in parliament to end offshore detention centres.

‘They have been waiting nine years for this day – to see each other again and to talk to parliament and be heard.

‘It was absolutely devastating because it was such an important day for them. It was their first chance to speak to the government and now they feel like they’ve let us down and have let down the refugees still in detention.’ 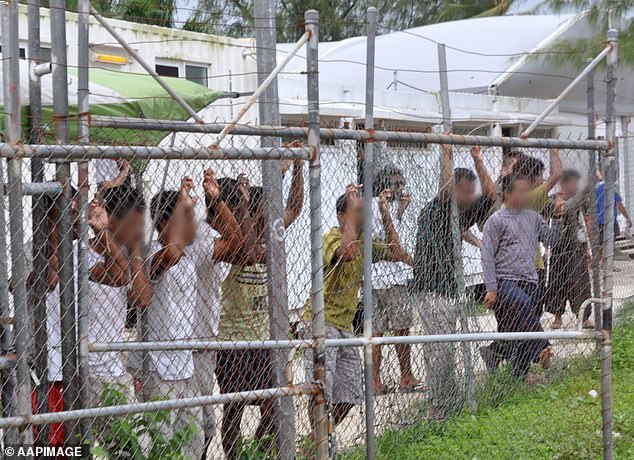 Betelhem was sent to Nauru while Ismail was sent to Manus Island (pictured). The pair travelled to Canberra as part of a group campaigning for the end of detention centres

Mr Karapanagiotidis said the independent not-for-profit organisation paid ‘top-dollar’ for ‘bottom-of-the-line service’ and blamed Qanats for not fulfilling its role as the nation’s largest airline.

‘The rest of us are used to Qantas letting us down,’ Mr Karapanagiotidis said.

‘Qantas needs to understand that there is a human cost and consequence when it does not fulfill its social contract with the Australian public.

‘It’s an airline about bringing people together so how has our national carrier become our national disgrace?’

It comes after a Qantas computer glitch on Sunday caused hours of delays on a dozen domestic flights and disrupted the travel plans of thousands of passengers.

On Monday as the airline cancelled 15 domestic flights – eight out of Sydney and seven out of Melbourne – due to operational reasons, including resourcing challenges and engineering requirements. 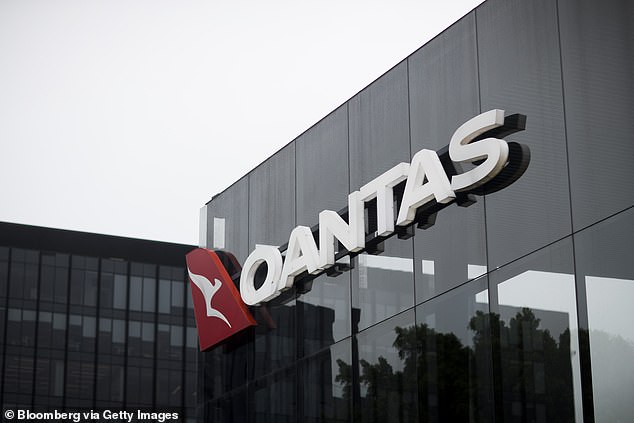 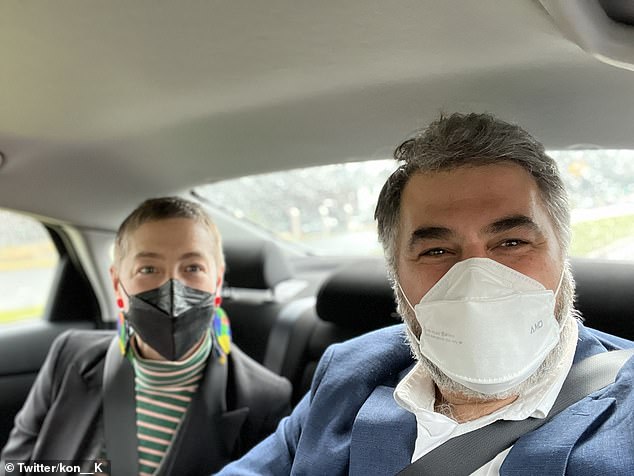 Qantas told Daily Mail Australia that Betelhem and Ismail’s 7:05am flight from Melbourne to Canberra was cancelled due to ‘crew sickness’.

‘Due to crew sickness we had to cancel a flight between Melbourne and Canberra this morning,’ Qantas said.

‘All passengers were reaccommodated onto other flights within three hours.’

Betelhem and Ismail were scheduled to arrive in Canberra at 8:30am to start meetings with MPs across the LNP, Greens, ALP and Independents but arrived five hours later.

Betelhem and Ismail arrived just in time to hear Greens Senator Nick McKim address parliament on the need to evacuate the 216 people being held at Nauru and on Manus island.

‘They need medical support, they need freedom, they need community support and they need permanent resettlement in a safe place.

‘Let’s reveal the horrors of Manus Island and Nauru. The murders, the rapes, the child sex abuse and the deliberate harming of innocent people,’ Senator McKim said.

‘The solution is there for us, let’s take it.’ 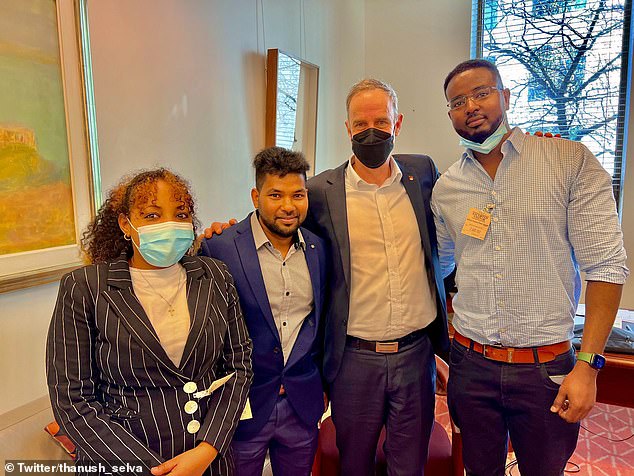 The Ending Indefinite and Arbitrary Immigration Detention Bill was introduced in parliament on Tuesday which would see an end to indefinite detention of asylum seekers.

Director of Advocacy and Campaigns at ASRC Jane Favero described Australia’s detention system as ‘a labyrinth in the dark’ which needs urgent reform.

‘Our immigration detention system is broken and is in urgent need of reform,’ Ms Favero said.

‘Once someone enters detention, it’s like being forced into a labyrinth in the dark.

‘Families are separated. Refugees are suffering. Years are wasted. Refugees don’t know why they’ve been detained or for how long.

‘It’s time to put humanity into Home Affairs and we urge all Parliamentarians to support this Bill, release refugees and put an end to indefinite and arbitrary detention for good.’ 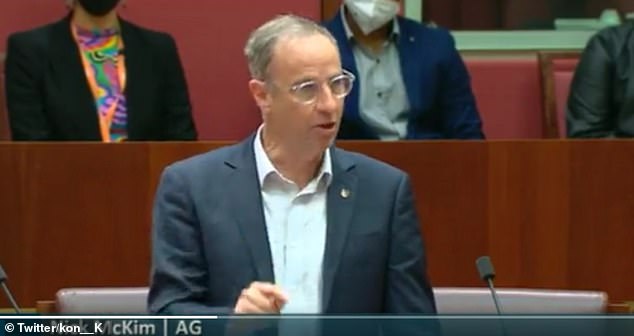 There are around 1,400 people in immigration detention with 216 at offshore centres.

Australia first introduced ‘offshore processing’, in 2001 at Nauru and Manus Island, under the Howard Government’s arrangements referred to as the ‘Pacific Solution’.

Offshore processing was suspended by the new Labor government in 2008 but resumed, also under Labor, in August 2012. 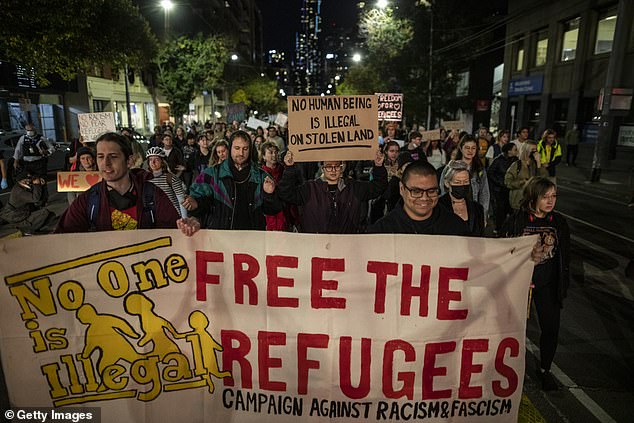 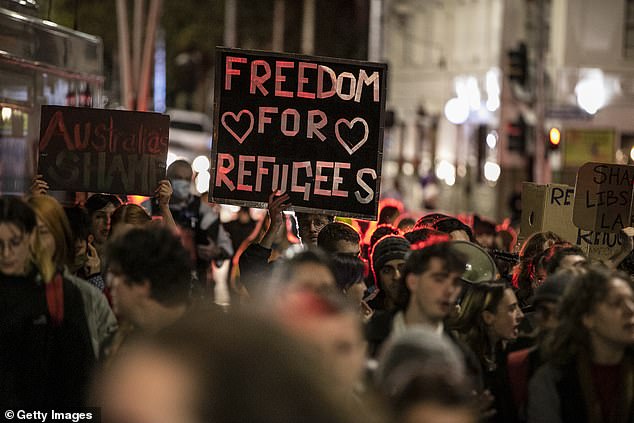 On July 19, hundreds of refugee advocates took to the streets outside Melbourne’s Park Hotel – a private hotel the federal government calls APODS, or alternative places – to protest the detainment of a group of asylum seekers.

A group of 17 men were brought from an offshore detention centre for medical care and after spending more than a year in a detention at a Brisbane hotel were abruptly moved to the Park Hotel.

The Refugee Action Coalition organised the protest to advocate for the release of people in detention who are in need of medical care.

Covid passports ‘likely to become a feature of our lives’ until the pandemic passes, ministers warn