A rare satellite image of a Chinese shipyard has revealed a new nuclear-powered hunter-killer attack submarine, military analysts have claimed.

A Pentagon report in November said the People’s Liberation Army Navy was preparing new attack submarines with vertical launch tubes for cruise missiles, possibly based on the existing Type 093 submarine.

Images obtained by Reuters from private satellite imagery provider Planet Labs and others circulating on social media show the submarine in a dry dock in Huludao Port in Liaoning province.

It is not clear whether the submarine is a new model, an upgrade of an existing vessel or something else.

Greenish covers shroud areas behind its superstructure and stern – parts of the vessel that could house missile launch tubes and a new, quieter propulsion system, analysts said. 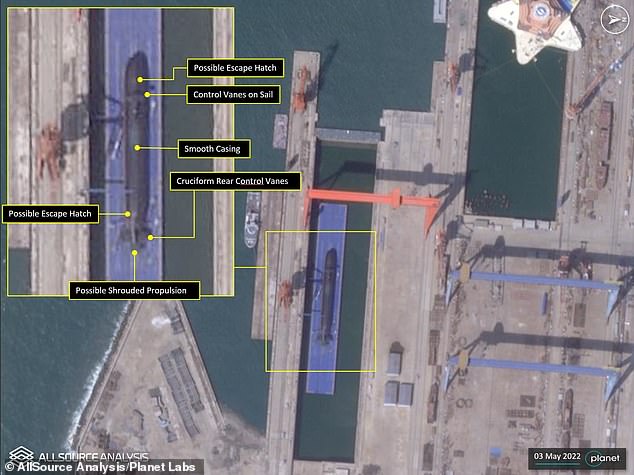 A rare satellite image of a Chinese shipyard could show a new nuclear-powered hunter-killer attack submarine, military analysts have said

Such clear images of submarines in dry dock are seldom seen.

The submarine was out of the water between April 24 and May 4, and was later seen mostly submerged in the same place after the dry dock was flooded.

Singapore-based security scholar Collin Koh said there was a great deal of interest in the prospect of a new class of Chinese Type 093 ‘hunter-killer’ submarine with vertical launch tubes.

But he said the recent satellite images were too limited to definitively identify the vessel.

The images ‘are very interesting but it is still very hard to be sure yet whether we are looking at some kind of refit for testing or a whole new class of submarine,’ said Koh, of the S. Rajaratnam School of International Studies.

Koh said he and others were watching closely to see whether new Chinese submarines would shift to quieter pump-jets instead of conventional propellers for propulsion. 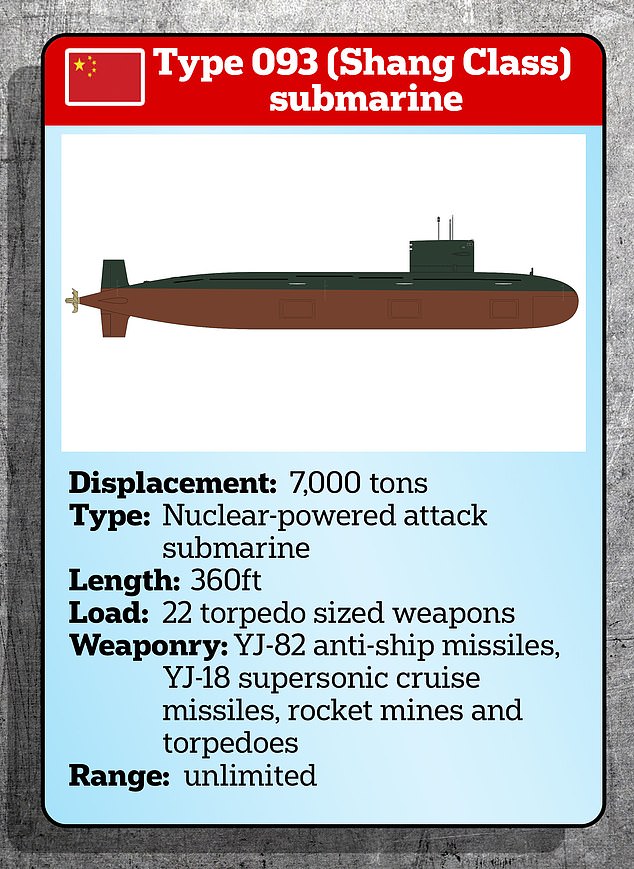 Because the stern is shrouded, it is not possible to tell what sort of propulsion the ship in the image uses.

The Chinese Defence Ministry did not immediately respond to Reuters’ requests for comment.

Jeffrey Lewis, a professor in arms control at the Middlebury Institute of International Studies at Monterey, said the latest images raised more questions than answers as to whether they revealed a new class of vessel.

‘It’s plausible, but there are questions I’d want answered. It wasn’t in dry dock very long and it is unclear how they may have reconfigured this submarine,’ he said. ‘Given the Pentagon report, there is certainly a lot of interest.’

The Pentagon stated China could quadruple its nuclear-warhead stockpile to 1,000 by 2030 in their September report Military and Security Developments Involving the People’s Republic of China 2021.

Security chiefs said Beijing’s priority was to continue a modernisation programme rather than increasing the size of its submarine force.

Harrow bus lane that is only 39ft LONG earns council £442,000 in fines in just under two years