A recruiter who has been bombarded with bogus resumes by welfare cheats says Centrelink could fix its ‘broken system’ by having agents monitor which jobs people are applying for.

Graham Wynn, boss of Australian and NZ firm Superior People Recruitment, previously revealed to Daily Mail Australia how he is receiving thousands of bogus job applications from people trying to keep their benefits.

Under the current Centrelink system, applicants are required to apply for 20 jobs a month to keep their welfare payments – something that has led to employers being bombarded with often ridiculous resumes.

Mr Wynn says the broken system can only be fixed if the applications are properly monitored and not just automatically added to monthly totals.

He believes that an agent should be notified when someone they are in charge of applies for a job. This, he says, would allow the agent to decide if the job is appropriate for the applicant’s level of experience. 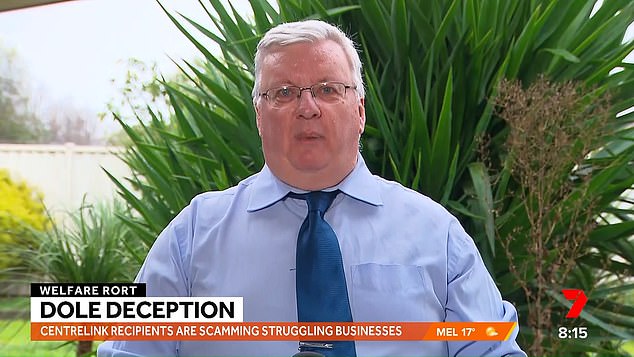 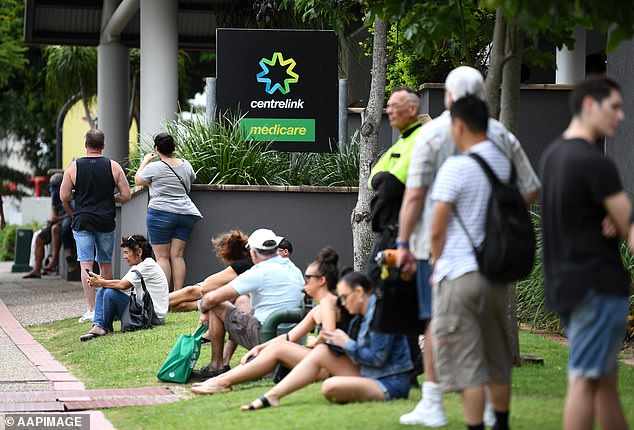 People queue up outside a Centrelink office in Southport on the Gold Coast. Under the Centrelink system, applicants are required to apply for 20 jobs a month to keep their benefits

‘We think back to the old days prior to technology,’ Mr Wynn told Sunrise. ‘You used to sit down with your Job Network people and they would talk you and recommend what jobs to go for.

‘I think what we need to do [now] with the automation system is every person who is registered with Centrelink has an active job provider. So what should happen is when they apply for a job, their Job Active provider should automatically be notified, this is the job they have applied for.

‘That way they can help them and say, “that is not appropriate, you don’t have the experience for that job”, and they can work with them directly. At the moment that does not happen and we have had people apply for 20 different jobs advertised, none they are suited to.’

Some previous examples of bogus resumes obtained by Daily Mail Australia include a jobseeker who admitted running their own business but confessed ‘I need to be on Centrelink’. Another CV went into detail about an applicant’s medical history, including a recent hernia.

From July 1, Labor’s new Points Based Activation System (PBAS) will be brought in to replace the current structure. It won’t force people to apply for 20 different positions, and instead will allow JobSeeker recipients to receive payments if they accumulate 100 points per month.

However Mr Wynn, whose company processes hundreds of applications a day, told Daily Mail Australia that the new system will have little impact in tackling welfare cheats. 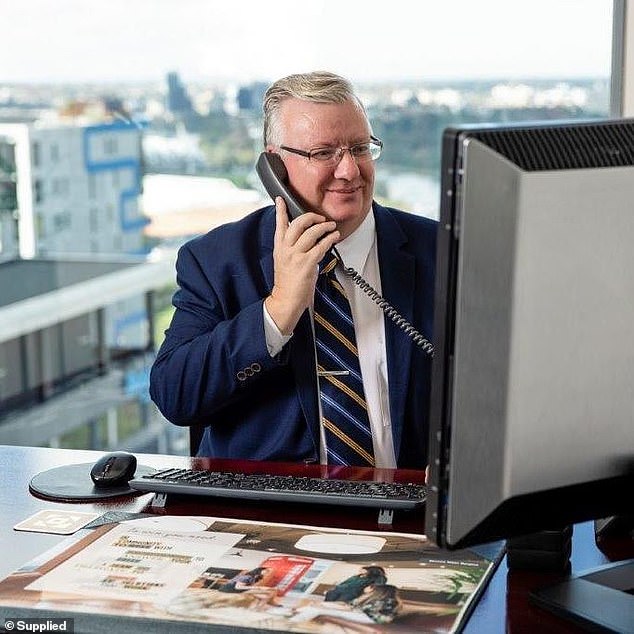 Graham Wynn, boss of Australian and NZ firm Superior People Recruitment, told Daily Mail Australia that the benefits system is ‘broken’ and said the new Labor changes would not solve the problems 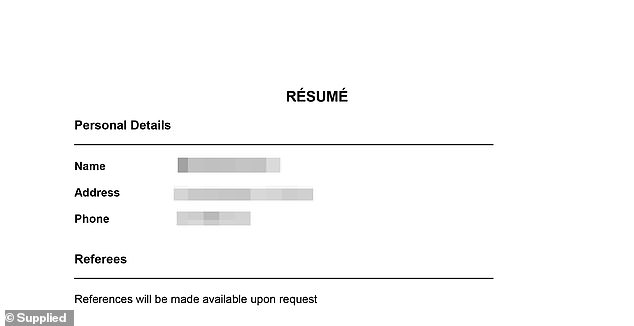 A recruitment firm shared examples of some of the resumes they’d received with Daily Mail Australia. This resume was blank and contained just personal details 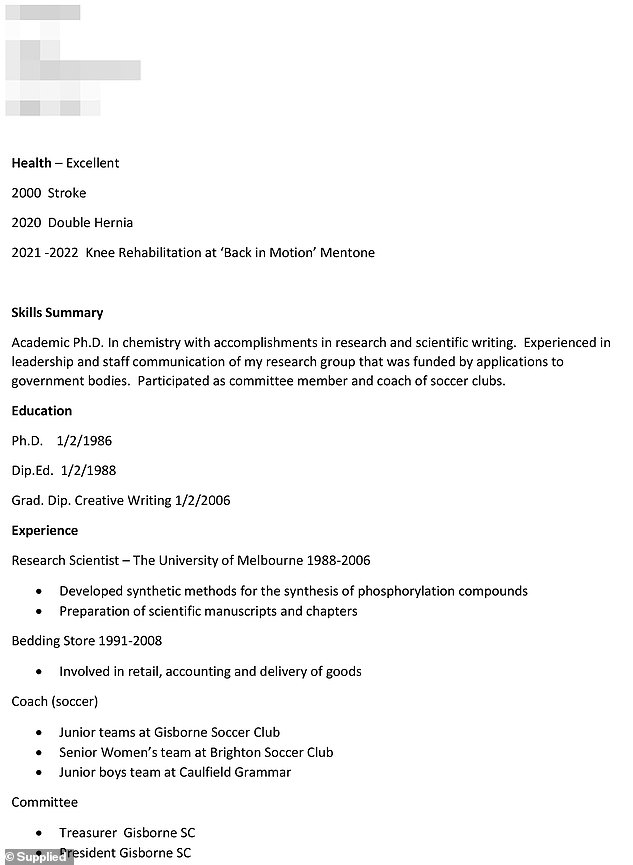 This bizarre application listed how the jobseeker suffered a stroke, double hernia and knee rehabilitation 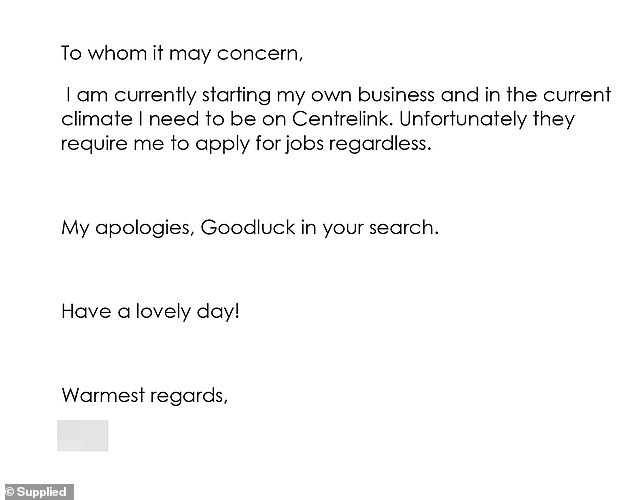 He also revealed that only around five per cent of the applications he receives are actually qualified for the roles they’re applying for.

Mr Wynn said: ‘It’s not going to have a great effect. If a person applies for a job they get five points, apply for 20 you get 100, which is the same as the current system.’

An anonymous recruitment firm also shared examples of some of the bogus applications it had received.

One application was for a car sales advisor role but the applicant’s CV only had plumbing experience.

WHAT’S CHANGING WITH THE CENTRELINK SYSTEM?

Currently, you can apply for JobSeeker payments through Centrelink if you’re looking for work and you’re 22 and over.

To meet the definition of looking for work and receive benefits, you must apply for 20 jobs a month.

The system is self-reporting so to claim a payment while looking for a job, you don’t need to call or visit a centre.

You can make your claims online – something that has led to some cheats fudging applications for jobs they weren’t qualified for just to keep their benefits.

Labor have decided to tweak the system rather than scrapping it and from July 1, the new Points Based Activation System (PBAS) will be brought in.

This will allow JobSeeker recipients to receive payments if they accumulate 100 points per month.

A person can get five points for every job application they submit, and 20 points for an interview, with varying points given for other employment-related activities.

However, as 20 job applications will lead to the 100 point threshold, there are fears the system won’t really change anything.

The new system will also allow some recipients to have their monthly targets reduced under personal circumstances, and if people get more than 100 points in one month, the remainder will be carried over.

Another application was from an apologetic jobseeker who said they had their own business but were ‘required’ to apply for roles to get their benefits.

A third person’s resume was blank and simply contained their name and address with references available on request.

Discussing the problems with Centrelink, Mr Wynn said: ‘Self-reporting is the biggest issue. Before, you had to meet face-to-face with someone from Centrelink to ensure the applications you were making were legit.

‘That changed and the government saved money with the online system during the pandemic so now there are no face-to-face meetings. There is no oversight. I had one person apply to 20 jobs in one day and he wasn’t qualified for any.

‘The new points system won’t change anything. It doesn’t tackle the problems of self-reporting and lack of oversight.’

Under PBAS, a person can get five points for every job application they submit, and 20 points for an interview, with varying points given for other employment-related activities.

The new system will allow some recipients to have their monthly targets reduced under personal circumstances, and if people get more than 100 points in one month, the remainder will be carried over.

About 169,000 participants will transition to an online portal to manage their job searches, while another 592,000 will be referred to a new face-to-face employment service provider.

The change comes after it was previously revealed six-worded applications and anti-vaxxer ramblings are among the resumes welfare rorters are deliberately handing in to recruitment agencies to avoid employment.

One resume received by a recruitment firm simply read: ‘I don’t have a resume atm.’

Another person wrote in their application: ‘I am fulfilling my jobseeker requirements by applying for this role.’

Another fake resume said he had ‘made it 10th grade’ and that he has ‘absolutely no skills whatsoever’.

In May, a dole recipient shared how he applied for 15 jobs in just three minutes in order to abide by Centrelink’s rules. 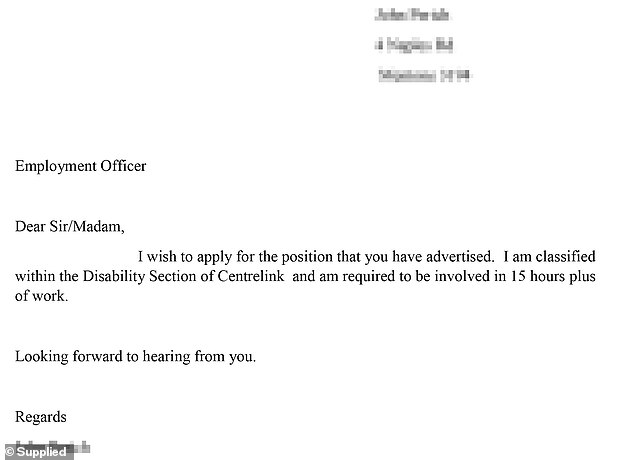 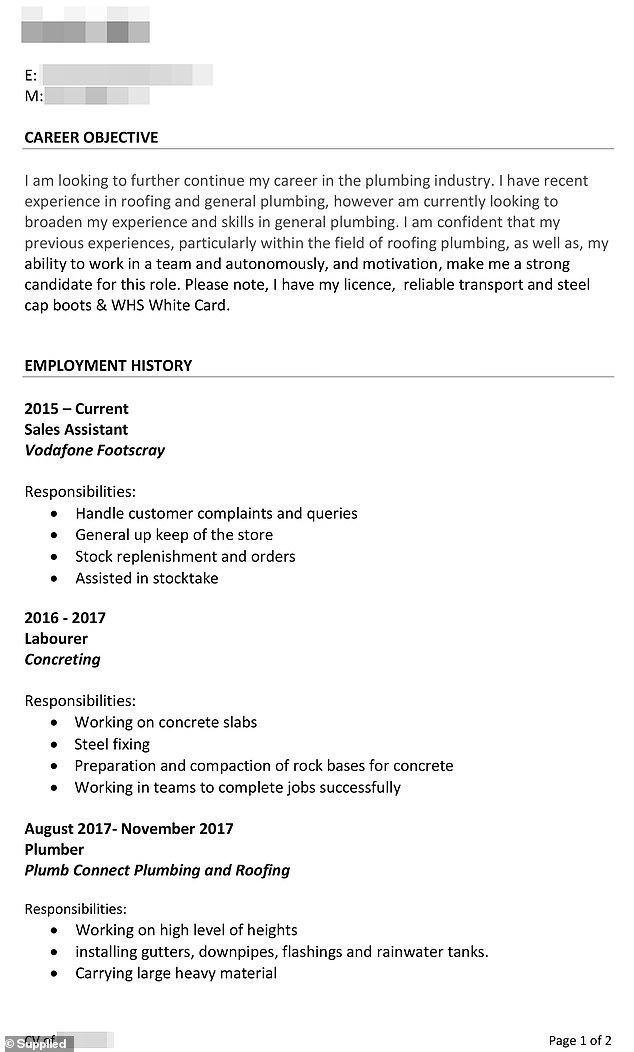 Mumfighter filmed a video where he challenged himself to send 15 job applications in eight minutes – and claims in the clip that he actually smashed out in three minutes and 22 seconds.

The former pro rollerblader and rollerblade instructor said he made the video for fun as he likes to ‘pretend to do things faster than the average human’ and normally takes the task much more seriously.

‘In reality applying for jobs normally takes me anywhere from 1-3 hours depending on if I need to rewrite my resume slightly and how much I’m being hindered by my ADHD,’ Mumfighter told Daily Mail Australia at the time.

Ted Cruz says migrant crisis grew from 900 to 15,000 in weeks after Biden canceled flights to Haiti