The Reserve Bank of Australia has given the strongest hint it may start cutting interest rates in 2024 after imposing the steepest increases in almost three decades.

Borrowers in August have copped yet another 0.5 percentage point increase, taking the cash rate to a six-year high of 1.85 per cent.

This has seen a borrower with an average $600,000 mortgage endure another $169 in their monthly mortgage repayments – the fourth consecutive rate rise for Australian homeowners since May.

But the Reserve Bank, in a new 71-page monetary policy statement released on Friday, hinted it may start cutting interest rates by citing futures market predictions. 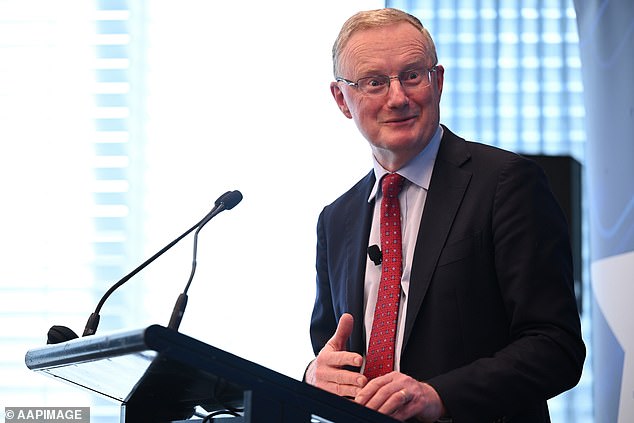 ‘The forecasts are based on some technical assumptions,’ it said.

ANZ: Up 0.5 percentage points from August 12, taking lowest variable rate to 3.69 per cent

WESTPAC: Up 0.5 percentage points from August 18, taking lowest variable rate to 3.64 per cent

NAB: Up 0.5 percentage points from August 12, taking the lowest variable rate to 3.94 per cent

‘Market pricing suggests that policy rates will peak in the first half of 2023 at levels considerably higher than at the onset of the pandemic.’

A monetary policy easing in 2024 would be the first since November 2020 when the RBA cut the cash rate to a record-low of 0.1 per cent.

This would mark a big jump from the two-decade high pace of 6.1 per cent in the year to June.

When the one-off effect of the GST introduction was excluded, this was the highest consumer price index since 1990.

‘In Australia, inflation is now the highest it has been since the early 1990s and is expected to peak at a higher rate than earlier envisaged,’ the RBA said. 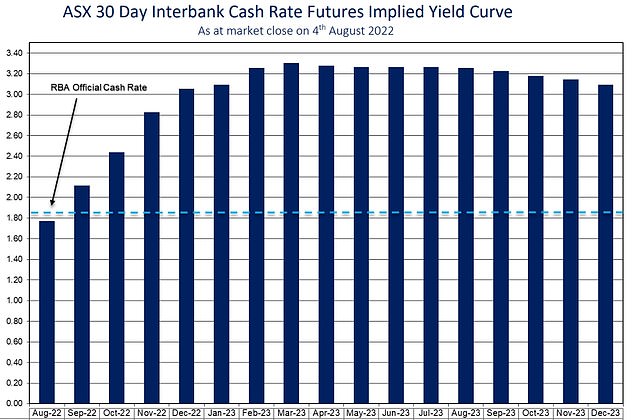 The 30-day interbank futures market has the cash rate peaking at 3.3 per cent in March 2023 and staying above 3 per cent throughout 2023

‘This moderation is expected to occur more slowly than previously assumed as higher energy costs partly offset declines in other input costs arising from the easing in supply chain pressures,’ the RBA said.

All of the major banks are expecting the RBA to raise rates again by another 50 basis points, or half a percentage point, in September with inflation expected to hit a new 32-year high later this year.

This would take the cash rate to a seven-year high of 2.35 per cent.

Three of the big four banks – Commonwealth Bank, ANZ and NAB – are expecting the Reserve Bank to keep raising rates until November while Westpac is forecasting the increases continuing until February 2023.

The 30-day interbank futures market has the cash rate peaking at 3.3 per cent in March 2023 and staying above 3 per cent throughout 2023.

The Reserve Bank has revised its outlook for unemployment, predicting the jobless rate will fall from an existing 48-year low of 3.5 per cent, as of June, to 3.25 per cent in December.

All of Australia’s big four banks – the Commonwealth Bank, ANZ, Westpac and NAB in that order – on Thursday announced they would pass on the RBA’s latest increase.

What a 0.5 percentage point rate rises means for borrowers

Can you spot the obvious problem with these Josh Kennedy tribute T-shirts?

Bosses must do more for menopausal staff facing stigma and ignorance about condition, experts warn