A reveller has been left fighting for his life after a baby bull severed an artery in his leg while goring and trampling him during a Spanish festival that saw another man killed by a bull three years ago.

One onlooker captured the dramatic moment on video, showing that the man had to be dragged to safety with blood gushing down his leg.

A female onlooker could be overheard yelling: ‘He’s bleeding to death’ as he was helped away before a Good Samaritan practiced a life-saving tourniquet after it was confirmed his femoral artery had been cut.

The 47-year-old remained in a serious condition in hospital on Wednesday after being operated on.

Footage of the moment he was gored showed him being tipped off a giant tyre by the animal as he taunted it in a closed arena filled with various obstacles. 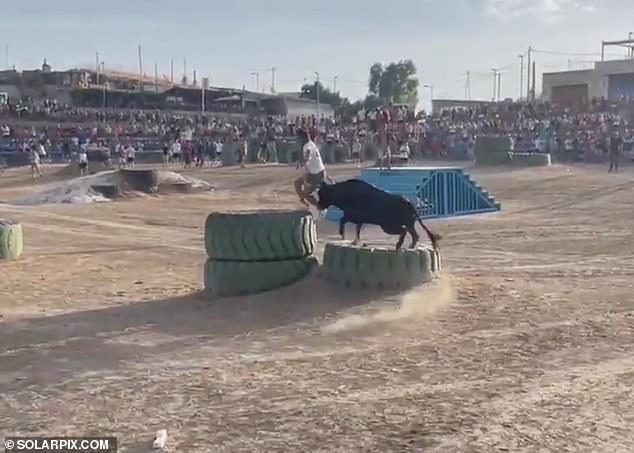 A reveller has been left fighting for his life after a baby bull severed an artery in his leg while goring and trampling him during a Spanish festival. Pictured: The man is seen trying to escape the bull on top of a pile of tyres in footage from the festival

He was upended a second time and attacked again as he lay helpless on the ground before being gored for a third time – this time in the upper part of his leg near his groin – as he tried to get back on the tyre with his energy sapped from the initial onslaught but failed to hoist himself up in time.

Other people in the arena with the bull noticed that the man was struggling, and rushed over to help him down off the tyres and away from the animal, with blood gushing from his leg.

At this point, he is shown collapsing to the ground before being carried away.

The drama happened at an annual festival in Pinoso near Alicante on the Costa Blanca, the same place where a 26-year-old man lost his life three years ago during the same festivities. 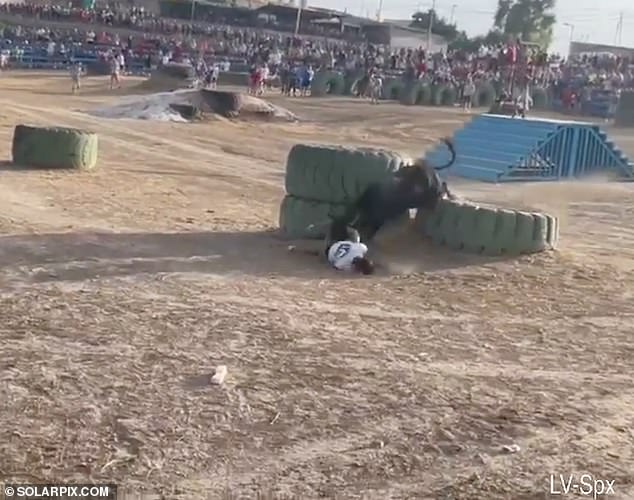 Footage of the moment he was gored showed him being tipped off a giant tyre by the animal as he taunted it in a closed arena. The bull did not relent in its attack, and also trampled him 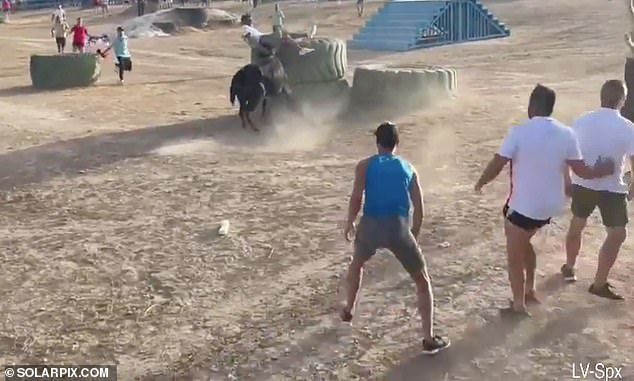 Pictured: The man is shown being speared into the air by the bull and against the tyres, as other people in the arena watch on

He bled to death on a hospital operating table after being gored in the left thigh and suffering an eight-inch gash in almost identical circumstances to the latest incident.

Pinoso’s mayor Lazaro Azorin confirmed the man hurt in the latest goring underwent an emergency operation after his life was saved at the scene thanks to a tourniquet which stemmed the blood heaemorrhage.

He was forced to deny rumours the unnamed reveller, who comes from Yecla in the neighbouring province of Murcia, had died in hospital but admitted his condition was serious.

Baby bulls can do a lot of damage with their horns despite weighing far less than adult animals. They are aged between one and a half and two.

They have been known to break peoples’ legs when they charge them.

Last month a reveller cheated death after being mauled by a bull during an annual event in the Costa Blanca resort of Moraira near Benidorm known as the Bous a la Mar, which literally means Bulls in the Sea. 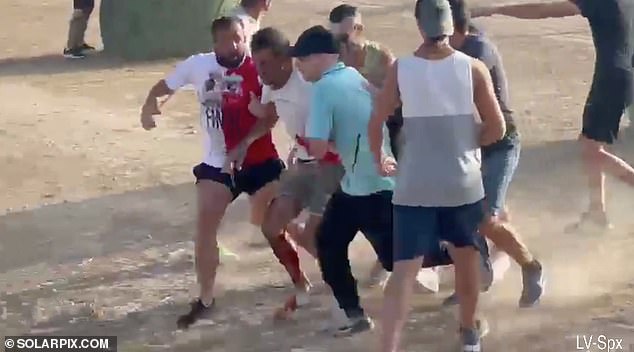 Other people in the arena with the bull noticed that the man was struggling, and rushed over to help him down off the tyres and away from the animal, with blood gushing from his leg

He suffered a gore injury to his groin as well as scratches and bruising after being pinned on the ground in a temporary bull ring set up by the marina quayside for nearly half a minute by the angry animal.

The animal’s two-legged prisoner eventually managed to free himself from its clutches and jumped into the sea after running to safety.

The day before the scare it emerged three people had died in just 24 hours after being gored by bulls at other festivals in the area.

On July 20 it was confirmed a 56-year-old man had lost his fight for life in hospital after being rushed to intensive care with head and gore injuries on July 12 from an event in Picassent near the east coast city of Valencia.

The local town hall said at the time it had decreed a day of mourning after learning of the man’s death.

On July 19 it emerged a 50-year-old man named as Josep Antoni Garcia Arnau had died at another Valencia hospital from injuries he suffered after being up-ended by a bull at a festival in Meliana a 40-minute drive north of Picassent.

He was diagnosed with seven broken ribs and one of the blows he suffered is said to have penetrated one of his lungs and caused a build-up of blood which eventually claimed his life.

Around the same time it was confirmed a Frenchman aged 64 had died in hospital nine days after being gored during an annual festival in Pedreguer on the Costa Blanca a half-hour drive from Moraira.

All three men had been taking part in annual events known locally as Bous Al Carrer, which literally means Bulls on the Street.

It feels like March 2020: Eerie scenes in New York as Omicron wave descends