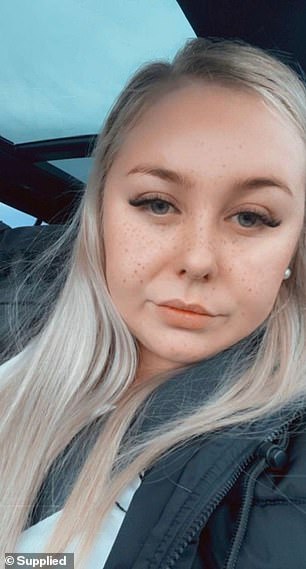 Hannah Dodson, 25, is one of hundreds of people who believed they were eligible for HomeBuilder grants of up to $25,000 only for the Queensland government to deny their applications using satellite photos

An Australian woman who is one of hundreds denied much-needed home grants after authorities used satellite images to reject them says the battle has taken a toll on her mental health.

Hannah Dodson, 25, is one of hundreds of people who believed they were eligible for HomeBuilder grants of up to $25,000 only for the Queensland government to deny their applications.

On Wednesday the Queensland Revenue Office (QRO) emailed several of the people Daily Mail Australia spoke with to inform them it was reviewing their applications.

Also on Wednesday, the man who set up a Facebook group to connect rejected home grant applicants claimed the government told him it would finally pay him the $25,000.

The QRO rejected Ms Dodson’s application – as well as hundreds of others who applied for the federal government grant – because it said satellite imagery showed construction activity prior to the start date for eligibility, June 4, 2020.

Ms Dodson was rejected despite building a house at Pallara in south Brisbane well after that date.

Ms Dodson found the satellite image the QRO used and said it showed ‘no construction’. 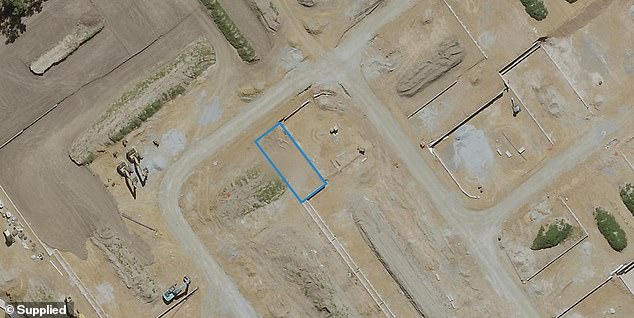 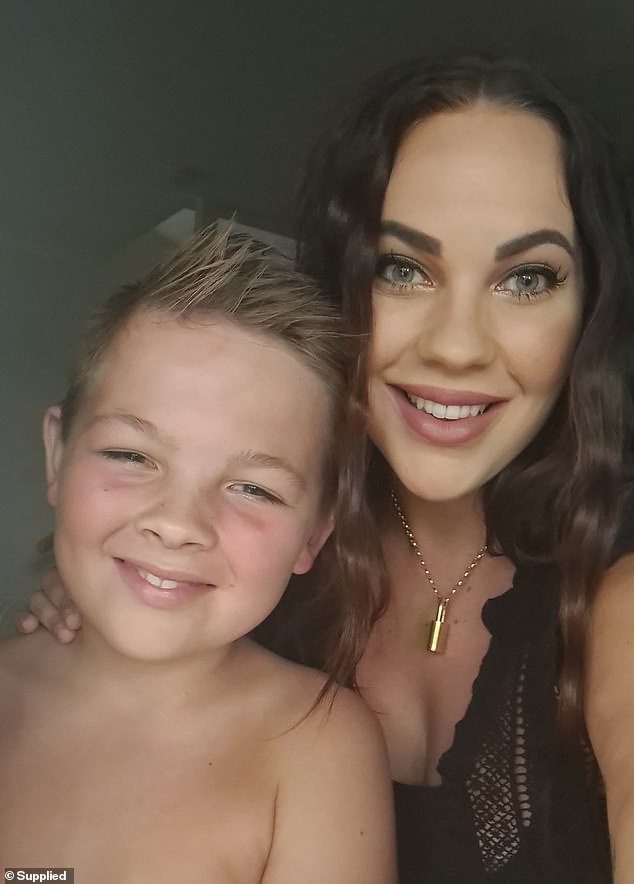 Jenna Cross said she’d had to make sacrifices after being knocked back for the HomeBuilder grant. She is pictured with her 11-year-old son

On Wednesday the Queensland Revenue Office (QRO) emailed several of the people Daily Mail Australia spoke with to inform them was reviewing their applications, including mum Jenna Cross (pictured right)

Many of the rejected applicants, and their developers, claim the satellite images used by the QRO show the aftermath of land clearing and subdivision rather than the construction of homes.

Ms Dodson saved for eight years in jobs including working at Hungry Jacks, and applied for the HomeBuilder grant to repay her grandmother, who loaned her the money to pay for her stamp duty.

‘The whole build was stressful and a toll on my mental health,’ Ms Dodson told Daily Mail Australia.

‘I thought, ‘finally, I can get a break from running around’ after settlement, but the six months wait until I received a rejection and up until now has been such a crazy rollercoaster.

‘I received the rejection letter in February 2021 and my jaw dropped, I questioned if I had read everything correctly.’

When she received an email from QRO on Wednesday announcing the review, she felt some hope returning.

‘The QRO is now reviewing … applications that may have been rejected in relation to commencement of construction issues. Your application is in scope of this review,’ the email said.

‘The Australian government has clarified its position on HomeBuilder grant eligibility criteria relating to commencement of construction.’ 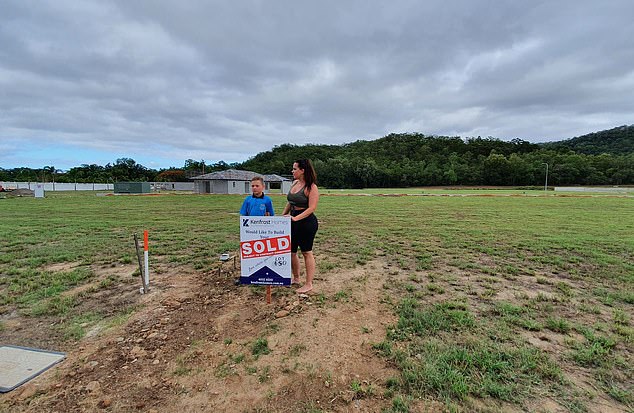 Ms Cross with her son on the Cairns block she bought in December 2020. Queensland Revenue Office rejected her application for the HomeBuilder grant because it said construction had commenced on the site before June 4, 2020 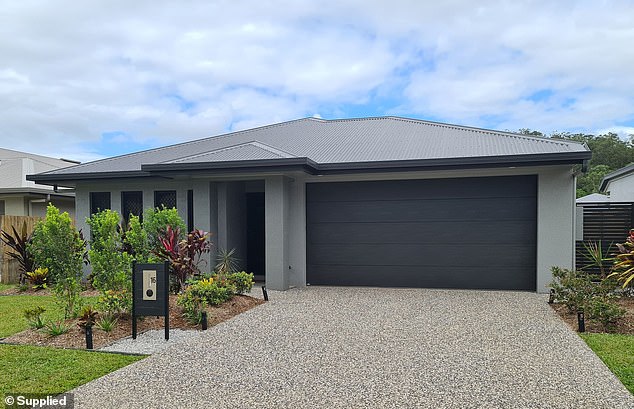 Hundreds of Australians who battled to buy their first home expecting government grants to get them over the line have been denied by a cruel technicality (pictured, the Cairns home Jenna Cross built – although promised government help was denied)

‘My eyes lit up and I was already feeling a sense of relief just knowing that this is one step closer to securing the grant! It’s about time,’ Ms Dodson said.

Jenna Leigh Cross, a mum rejected for a $25,000 grant, also said it was ‘about time’ for the review.

‘Applications should have been reviewed more thoroughly. It’s such a shame this has caused stressed for so many families including myself.’

Meanwhile, Gold Coast single dad Clint Calman posted in the Facebook group he set up to connect with rejected grant applicants that he expected to receive the grant in coming days.

‘Just had a phone call from OSR, they have confirmed that they have received advice from Federal Government stating that we do qualify for the grant.

‘I have been told that my payment will be processed in the following days.

‘Congratulations to all that have been affected, you guys will be next and receive the Grant that you genuinely qualify for.’

Ms Cross was left reeling after being denied a $25,000 government grant to buy her first home by the cruel satellite image technicality.

Ms Cross, a 31-year-old flight attendant, was ‘shocked and disappointed’ after being refused the HomeBuilder grant she was planning to put toward building a $400,000 house in Cairns.

The rules said no grants can be paid to an applicant if they built on their block before June 4, 2020.

Although she signed for the house and land package in October 2020, and the slab for her home was only laid in January 2021, Queensland authorities rejected her, citing aerial photos of work before June 2020.

That was four months before she even owned it.

A frustrated Ms Cross, who hasn’t been shown the satellite photos, says they can only show work done prior to sale by the developer.

It cleared and subdivided the land which was previously cane fields, to make it ready for sale. 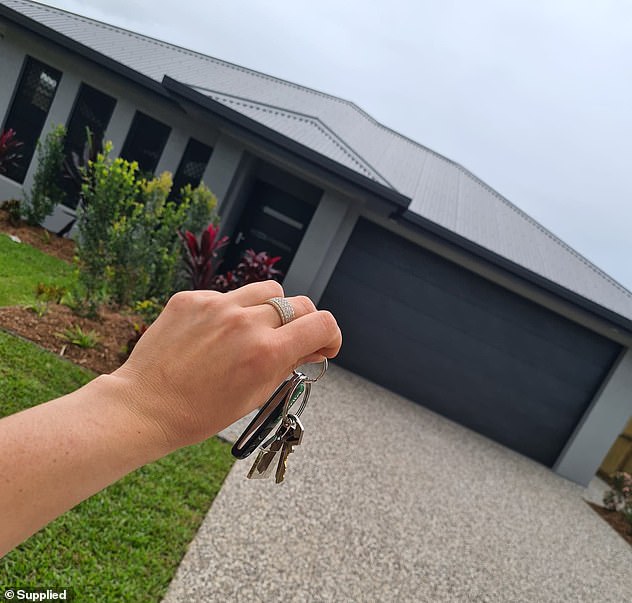 Ms Cross bought a block on the Mount Peter Estate in Edmonton, south of Cairns, in October 2020 from a developer. But the Queensland government used aerial photos showing the developer sub-divided the land to reject her claim for a $25,000 grant 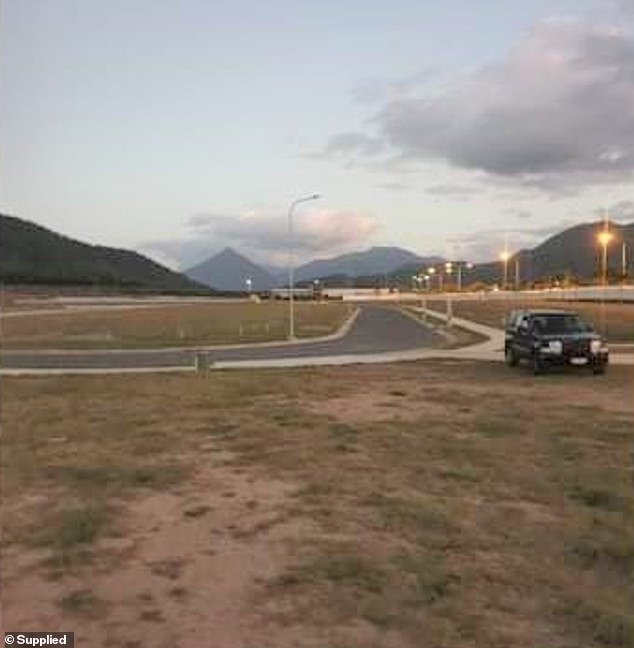 The state government rejected grant applications for several people who bought blocks on Ms Cross’s street –  Mount Peter Estate in Edmonton, south of Cairns – because it said construction had commenced before June 4, 2020. This photo was taken on September 1, 2020

Ms Cross and her neighbours are far from alone in being turned down for the home grants over building work that had nothing to do with them.

Ms Cross is adamant she met the criteria to receive the Federal government’s $25,000 HomeBuilder grant. Her developer agreed and wrote a letter supporting her claim.

But her appeal was rejected with the government claiming ‘excavation and site preparation works on the site on which the new home is located commenced prior to 4 June 2020’.

‘My neighbours had their grants approved and we’re all on the same land, registered at the same time.

‘They said they had evidence from satellite photos but they’ve never sent me the evidence…I can’t get my head around it.’

She went ahead and built a $400,000 four-bedroom house on the block but has had to make several sacrifices.

Ms Cross had to cancel an overseas holiday for her and her son Jailen, 11, and shelved plans to upgrade her car because the grant was denied.

She also cancelled the installation of solar panels on her new home.

She feels embarrassed that she ‘personally thanked the treasurer Josh Frydenberg for the grant on one of my flights’.

‘This grant would have helped me so much. Obviously that was before I was rejected.’ 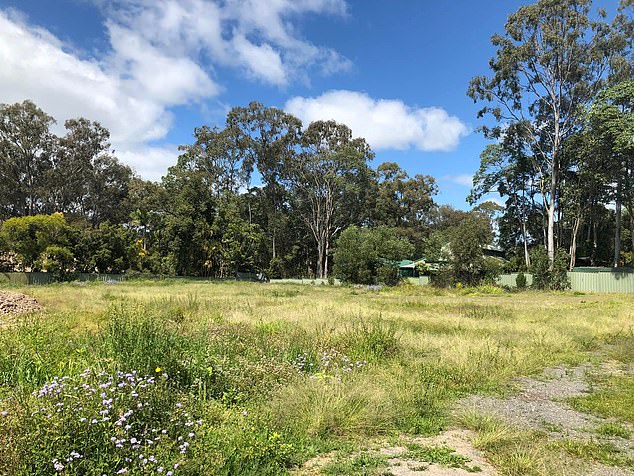 Melissa Bloomfield applied for a HomeBuilder grant to build a home on this Redlands block, near Brisbane, but her application was rejected because the Queensland government decided construction had begun before the cut-off date for eligibility

Richardson Plant wrote a letter of support stating it had only prepared the ground subdivision as required by law. It didn’t start building Ms Cross’s home until August 28, 2020.

Another woman, disability support worker Melissa Bloomfield, had her grant rejected after she worked extra shifts and spent a year couch-surfing in order to raise a deposit.

She bought a unit off the plan in Redlands, south of Brisbane.

The Queensland government claimed a satellite image showed the site where her home was built showed construction was underway before June 4, 2020.

But the image simply showed a cleared patch of land after the house on it previously had been demolished.

‘When I first read the letter I was thinking ‘surely not’. I couldn’t believe it,’ Ms Bloomfield told 9News.

‘I was very, very taken aback because I was just waiting for the grant to come through. I thought there was no way it would be rejected.’

‘You go to purchase a home-bare block of land if you want to build, the previous people subdivided and cleared the land – that has nothing to do with your purchase.

‘But someone in a government department seems to be making the decision that this is enough to reject the grant.

‘I’m seeing on other Homebuilder grant pages around Australia and they’re approving the applications in a few weeks. The team we’re dealing with here are the only state doing this.

‘I’m frustrated that we have to go through this garbage when we know we qualify.’

He applied for the grant when building his first home, a Southport townhouse, and was rejected. 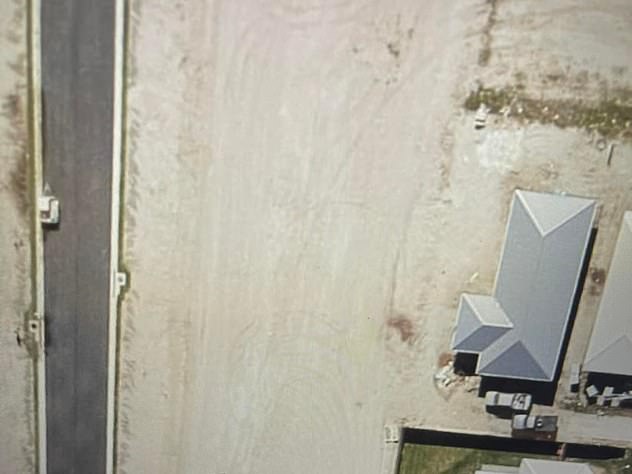 Another satellite photo showing what looks like a vacant block that QRO claimed shows construction activity. Angry grant applicants say their blocks were not being built on but had just been cleared by developers or previous owners

While 85 people have joined the page he said there are probably hundreds more in the same position.

‘I know of a lot more and I’m sure there’s a lot I don’t know about. Just in my block of 30 townhouses there’s 13 people who were knocked back.’

He claimed dozens of families have been caught out after taking short-term loans or borrowing money from family to get their deposit together.

‘I don’t understand what the Queensland state government has got to gain from knocking back a federal grant anyway?’ Mr Calman said.

‘Is it one person in the office deciding on their own to try and save the federal government some money?’

‘This is in relation to commencement of construction dates and residency requirements.

‘This also applies to applicants who may have applications pending.’

Retro pictures show McDonald's restaurants from he 80s and 90s

Alex Murdaugh was talentless lawyer who got plum job with family connections, per local editor

Jewish lawyer wins more than £26,000 in a religious discrimination case