Russian prosecutors have asked for Brittney Griner to be jailed for nine-and-a-half years for bringing cannabis into the country.

A verdict is expected later today and a sentence may be handed down by this evening.

Griner pleaded guilty to drugs offenses in July. She is still incarcerated in Russia, desperately hoping for an 11th hour deal to be struck by the US and Moscow to bring her home.

The WNBA star was arrested at the airport in Moscow after being found to be carrying a marijuana vape pen. 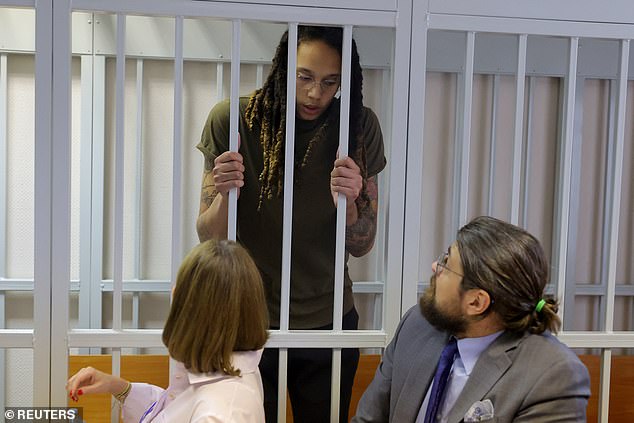 Griner is pictured with her defense lawyers, Maria Blagovolina and Alexander Boykov. in court earlier this week

She had traveled to Russia to play in its women’s basketball league during the WNBA off-season.

There was rampant speculation at the time that she was being made a political example of and used in the US’s dispute with Putin, which reached a crescendo at the outbreak of the war in Ukraine in February.

The State Department had been in talks to secure Griner’s release as part of a deal that would also bring imprisoned American Paul Whelan home.

The deal has been on the table for weeks, but Russia is yet to agree.

US officials will not confirm reports that it includes freeing a Russian criminal known as the ‘merchant of death’.

Griner pleaded guilty to bringing drugs into Russia in July.

Her family say they have been frustrated with the White House response to the situation.

White House Press Secretary Karine Jean-Pierre told reporters Monday that Russia has made a ‘bad faith’ response to the US government’s offer, a counteroffer that American officials don’t regard as serious. She declined to elaborate.

Griner has acknowledged there were vape canisters containing cannabis oil in her luggage when she was arrested at a Moscow airport in February.

But she insisted that she had no criminal intent and that the canisters ended up in her luggage because she was packing hastily.

Griner played for a Russian women’s basketball team in the WNBA off-season.

Australians under 40 reveal why they chose AstraZeneca vaccine