Russian warships have staged a show of strength in the Sea of Japan after the country’s new Prime Minister laid claim to a chain of islands controlled by Moscow.

The Varyag, a Russian cruiser and flagship of the Pacific Fleet, took part in the drills alongside anti-submarine destroyer Admiral Tributs and 12 support ships on Monday.

Part of the exercise took place inside Japan’s ‘economic zone’ where military drills are banned under international law, local media said, likening it to a ‘welcome message’ for new Prime Minister Fumio Kishida who was sworn in just last week.

It comes after Kishida staked a claim to part of the Kuril Islands chain which separates the Sea of Okhotsk, on Russia’s far eastern coast, from the Pacific. 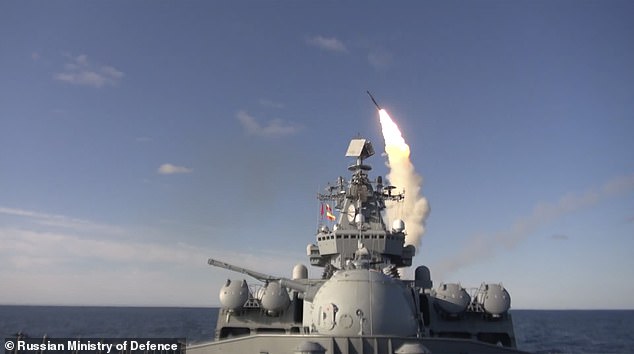 Russia’s Pacific Fleet held combat drills in the Sea of Japan on Monday, part of which is thought to have taken place in Japan’s ‘economic zone’

Speaking to parliament on Tuesday, a day after the military drill, Kishida vowed to resolve a dispute over the islands that dates back to the Second World War.

But Dmitry Peskov, spokesman for Vladimir Putin, was quick to shoot down the claim – describing all the islands as ‘Russian territory’.

The drills were ‘planned’, Russia said – a phrase meant to imply they were not a response to Kishida – and were ‘part of the final inspection for summer training.’

Russia and Japan are currently in talks over the Kuril Islands, a volcanic archipelago which stretches from the northern coast of Japan to the southern tip of Russia’s Kamchatka province.

Historically, ownership of the islands has been split with the Russian Empire and Empire of Japan agreeing to the division in the 1855 Treaty of Shimoda.

That treaty gave Japan control over the four southern-most islands, which it calls the ‘Northern Territories’, while handing the rest to Russia. 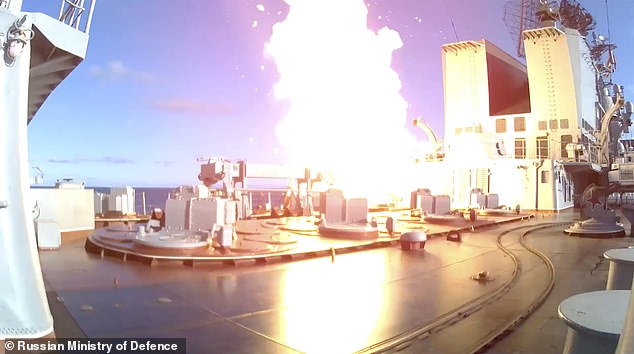 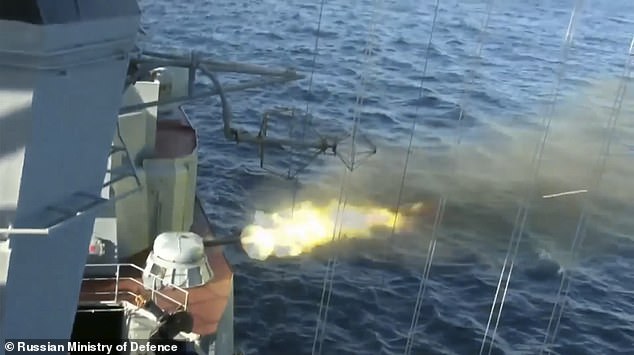 Video of the drill also showed the ship firing its machine-gun turrets and main cannon, which Russia said was a drill to mark the end of the summer training period 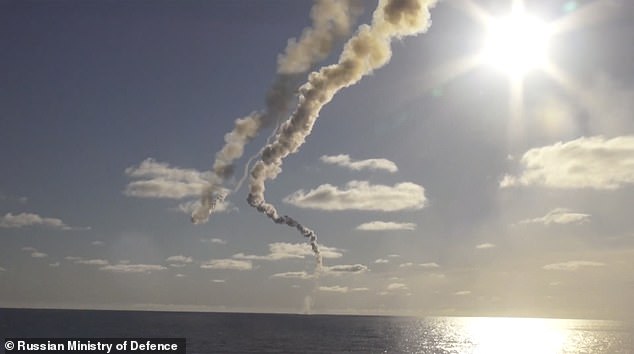 Video of the drill was published as Japan’s prime minister laid claim to a set of disputed islands, prompting some to liken the drill to a ‘welcome message’

But, at the end of the Second World War, the Soviets seized control over the whole chain though Japan refused to recognise the move.

The two countries have still not signed an official peace treaty due to the dispute.

‘We must solve this issue and not leave it to future generations. The government intends to sign a peace treaty with Russia.’

But Peskov hit back against the claim, saying simply: ‘We do not agree.’

Lavrov said last week that Russia had ‘constructive, frank relations’ with Japan, but the prospect of the islands returning to Tokyo are seen as highly unlikely while Putin remains in office.

The island chain is just the latest flashpoint in the Pacific, amid an ongoing standoff between China and Taiwan that is threatening to drag in the US, Australia and other allies including the UK.

A week ago, China flew 150 aircraft into Taiwan’s air defence zone in a huge show of force that coincided with its National Day celebrations. 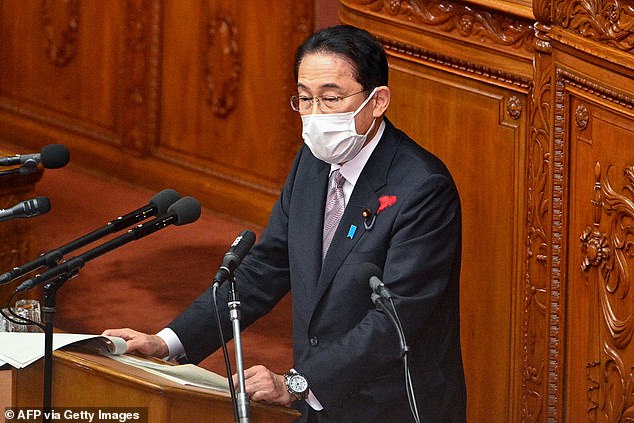 Taiwan then held a National Day parade of its own at the weekend, during which President Tsai Ing-wen gave a speech vowing not to bow to pressure from Beijing.

China’s President Xi Jinping has vowed to ‘reunify’ the island with the mainland, using force if necessary.

Meanwhile North Korea is continuing to test new weapons systems and just yesterday accusing the US and South Korea of threatening its safety.

Kim Jong Un, attending a weapons exhibition where he spoke surrounded by missiles, vowed to build an ‘invincible military’.

But the dictatorial ruler insisted it will only be used for self-defence in the face of America’s ‘hostile policies’.