BREAKING NEWS: Senate approves Finland and Sweden joining NATO: Josh Hawley is the ONLY Republican to vote against expanding alliance during Putin’s war after going to battle with Tom Cotton

The Senate voted in a broad bipartisan majority to add Sweden and Finland to the North Atlantic Treaty Organization (NATO).

Hawley has long called for reducing troop levels in Europe to shift to an Asia-focused strategy. Paul had submitted an amendment that would have reiterated that the NATO charter’s Article 5 cannot supersede Congress’ ability to declare war but it failed 10-87. 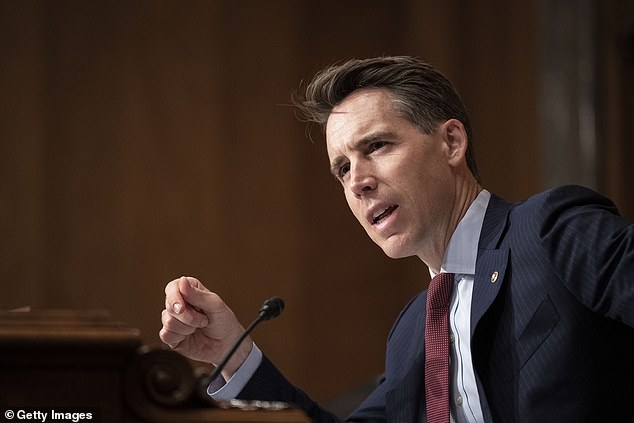 Sen. Josh Hawley, the only no vote, has long called for reducing troop levels in Europe to shift to an Asia-focused strategy

Hawley had argued in an op-ed for The National Interest that the U.S. should focus more on the threat from China than expanding its alliance with European nations.

‘Our foreign policy should be about protecting the United States, our freedom, our people, and our way of life, and expanding NATO, I believe, would not do that,’ Hawley said on the Senate floor ahead of the vote. ‘What I am arguing for is the return to a classic nationalist approach to foreign policy … grounded in our nation’s interests and in the reality of the world as it is, not as we wish it was.’

‘How could one disagree?’ Cotton asked on the Senate floor of Sweden and Finland’s addition. ‘After all, the last countries to join NATO — Montenegro and North Macedonia — were each approved by the Senate with only two ‘no’ votes.’

‘It would be strange indeed for any senator who voted to allow Montenegro or North Macedonia into NATO to turn around and deny membership to Finland and Sweden,’ he remarked.

‘I would love to hear the defense of such a curious vote,’ Cotton said with palpable sarcasm.

Hawley voted for Montenegro and North Macedonia’s addition to the alliance in 2019.

Senate GOP Leader Mitch McConnell, Ky., issued his own caution to potential no votes ahead of the final count:  ‘If any senator is looking for a defensible excuse to vote ‘no,’ I wish them good luck,’ he said. ‘This is a slam dunk for national security that deserves unanimous bipartisan support.’

Giving HPV jab to women with pre-cancerous cells on their cervix may ward off cancer, study suggests

Darwin: Four men aged between 27 and 36 die in a horror crash

Former Jets running back Zac Stacy is held on $10,000 bail and forced to surrender his passport