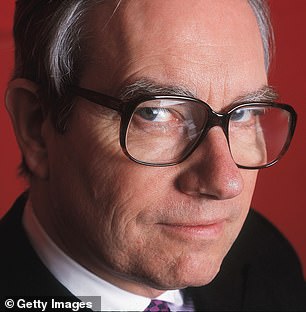 Shock: Sir Christopher Gent had a long and distinguished career

One of the City’s best known figures has been slapped with an embarrassing fine by financial regulators for sharing inside information.

Sir Christopher Gent, the former boss of Vodafone, has been fined £80,000 by the Financial Conduct Authority (FCA) for unlawfully disclosing inside information while chairman of the FTSE 250 medical devices company ConvaTec.

The information related to an announcement regarding its financial guidance as well as the retirement plans of its chief executive, which Gent shared with two of the biggest shareholders before it was published to the stock exchange in October 2018.

‘Inside information is not a private commodity for those with privileged access to it. The law requires inside information to be disclosed properly and not to major shareholders or others in advance of announcements, as in this case,’ Steward added.

While the watchdog said there was no evidence Gent traded on the information or intended to make personal gain, he ‘acted negligently in disclosing the information’ and had committed market abuse. 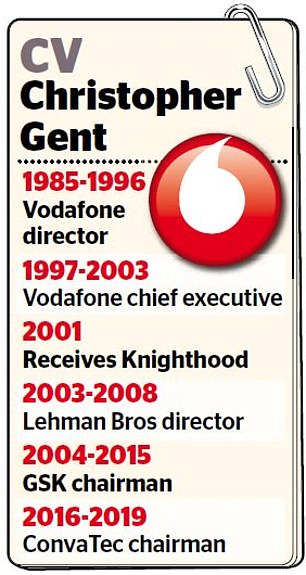 ‘Given his training and experience, Sir Christopher should have realised that the information he disclosed was, or may have been, inside information and that it was not within the normal exercise of his employment to disclose it,’ it added.

Gent, 74, said he was ‘very disappointed’ but the ruling confirmed there was ‘no impact on the markets and that I made no gain personally, nor intended to do so’.

‘I have since retired from business life and wish now to draw a line under the matter,’ he added.

He rose to fame in the 1990s as boss of Vodafone, turning a small subsidiary of British electronics group Racal into one of the world’s biggest telecoms firms, leading a takeover of Germany’s Mannesmann in 2000, one of the largest corporate acquisitions in history, with a price tag of £110billion.

And then there were EIGHT! Javid drops out of Tory race