Solicitor, 52, who sexually assaulted woman as she slept before taking photos of her on his phone is struck off after he was jailed for five years

A solicitor who was jailed last year for sexually assaulting a woman as she slept has now been struck off.

Ashley Attwood was sentenced to five years and placed on the sex offenders’ register indefinitely after he admitted to the assault by penetration in August 2018.

The 52-year-old also took 11 pictures of the woman on his phone, before later deleting them to try and hide the evidence from police according to a judge.

Attwood, of Pershall, Eccleshall, has now been struck off the Roll of Solicitors following a solicitors disciplinary tribunal.

His lawyer said Atwood accepted the decision was ‘inevitable’. 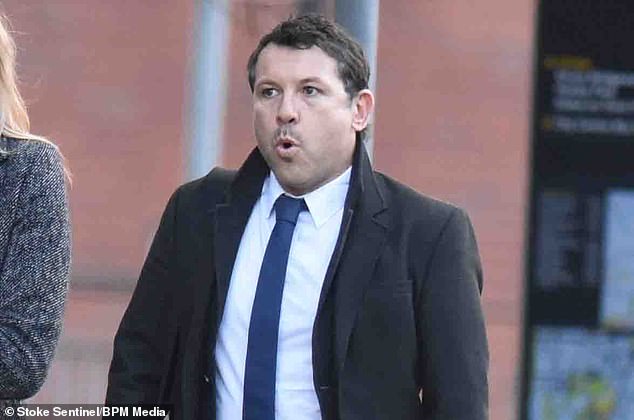 Ashley Attwood (pictured), 52, who was sentenced to five years and placed on the sex offenders’list for sexually assaulting a sleeping woman, was struck off as a solicitor

Andrew Bullock, who appeared for the Solicitors Regulation Authority, said that in carrying out the offence Attwood had ‘failed to act with integrity in that he had failed to act with moral soundness, rectitude and steady adherence to an ethical code’, which put him in breach of the SRA principles.

Mr Bullock also argued that the public would not expect a solicitor to ‘impede or prevent the judicial process by deleting evidence, namely the 11 images’.

Police were able to recover thumbnails of the images, but during the trial Judge Paul Glenn described Attwood’s actions as an ‘obvious attempt to destroy evidence’.

The tribunal heard that Attwood believed he ‘did not deserve to call himself a solicitor anymore’.

David Barton, mitigating, said Attwood was ‘horrified by the offence and was fully remorseful’, and that he accepted that being struck off was ‘inevitable’.

In a ruling, panel chair Ashok Ghosh said that Attwood was ‘completely culpable for his misconduct’, and had caused ‘significant harm’ to his victim and to the reputation of his profession.

Mr Ghosh said: ‘The Tribunal determined that Mr Attwood’s conduct was aggravated by the commission of a serious criminal offence. He had tried to conceal his misconduct, by deleting images from his phone. His conduct was deliberate, calculated and repeated.

‘The serious nature of his misconduct was such that sanctions such as no order, a reprimand, fine, or suspension did not adequately reflect its seriousness. The Tribunal considered that Mr Attwood’s misconduct was so serious that the only proportionate and appropriate sanction was to strike Mr Attwood off the Roll.’

The tribunal also ordered Attwood to pay £3,000 costs to the SRA.

Attwood had been practising as a solicitor since 1998, and at the time of the sexual assault he was in sole practice trading as Attwood Solicitors, specialising in personal injury work, with offices in Burslem, Stoke and Stone.

He had remained on the roll but his last practising certificate ended in December 2020.

Where’s Wally now? Walrus quits UK after six weeks in the Isles of Scilly and heads for Ireland