Huge queues are building up once again at Stansted airport this morning with scenes of people sleeping in the airport overnight that look like ‘a shootout’ and flights being delayed by more than six hours.

Stansted has been criticised by unhappy customers for days due to long queues, delays and cancellations which show no sign of stopping as the UK enters what is expected to be the ‘summer of discontent.’

Labour shadow minister David Lammy is also caught up in the chaos – tweeting to his more than 780,000 followers to highlight the issue.

He said: ‘Another morning, another horrid queue at airport security!

Stansted airport told MailOnline some passengers choose to stay in the airport overnight if they are catching early flights – but they admitted delays had been caused by a higher level of staff absence than normal and a cancelled Stansted Express service. 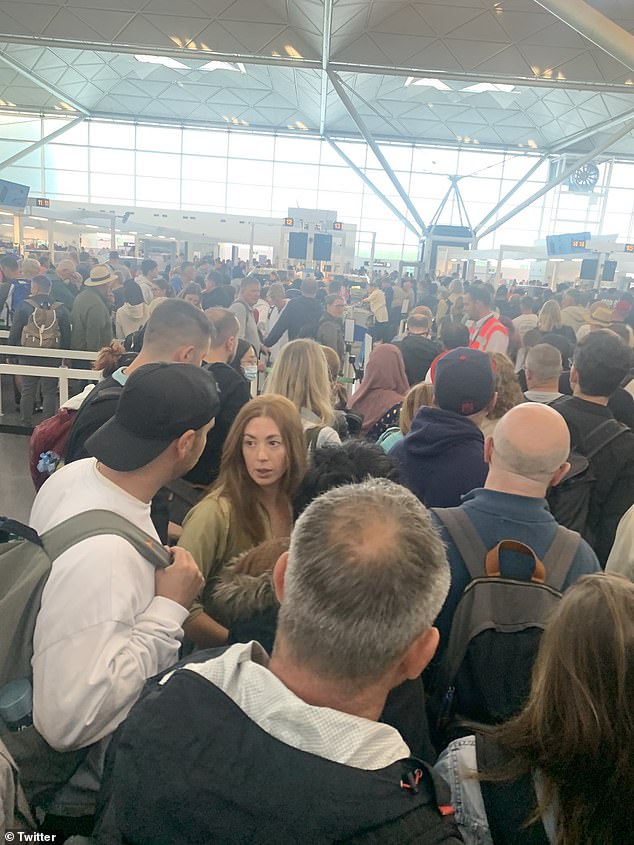 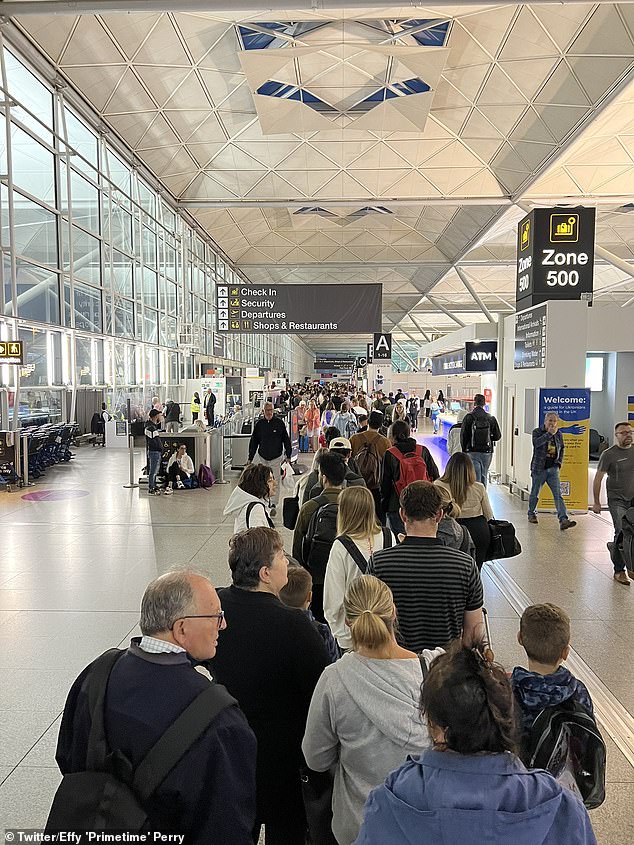 Other Twitter users have also encountered long delays to get to security, with one saying they have never seen the airport as busy as this morning

As well as queues to get through security and check-in, multiple passengers have complained of delays overnight and this morning which appear to have affected hundreds of people.

Ryanair is one of the main airlines to fly in and out of Stansted – but customers have complained of poor service and waiting for long periods at gates before being able to board planes.

Late last night a passenger shared on social media that their Ryanair flight was due to depart at 5pm but they had been stuck on the plane for more than six hours.

It’s unclear whether the flight did take off or whether passengers were forced to take an alternative one.

One social media user said this morning: ‘Stood in corridor at gate 83, Stansted for last 30 mins.

‘Couldn’t we have waited in departures if flight to Shannon is delayed?’

Another flyer this morning joked that ‘the whole of England is in the security queue’.

Problems continued from overnight with one Twitter user comparing the situation to a ‘shootout’.

They said: ‘Stansted 3am is the most no-rules place in the world btw.

‘Bodies scattered all over the floor like there’s been a sh0otout [sic] and a random guy getting cautioned by transport police in the corner.’

Issues aren’t just limited to queues either – one passenger reported ‘not enough drinks or food’ for passengers leaving Stansted on a four-hour Ryanair flight, adding each customer could only have one drink during the flight.

They also said basic options such as tea and coffee were unavailable, despite advertising to the contrary.

A spokesperson for Stansted airport said: ‘We do experience passengers arriving the night before who are travelling on the first wave of departing flights.

‘Today we are expecting 38,000 passengers departing the Airport, and this morning we processed over 9000 departing passengers between 0400 and 0700 hrs with an average queue time of 12 minutes.

‘The operation was affected this morning by the cancellation of the first Stansted Express inbound train to the Airport, increasing the volumes of passengers arriving in a smaller period.

‘This was compounded by a higher absence level than normal which would have reduced the number of security lanes available at that peak time.

‘The Airport is currently operating normally and no operational issues at present.’

The latest chaos comes after weeks of frustration at UK airports as the summer of discontent begins to take shape.

Hours of delays, hundreds of flight cancellations and people forced to sleep on airport floors have been common across UK airports in recent weeks as staff shortages bite. 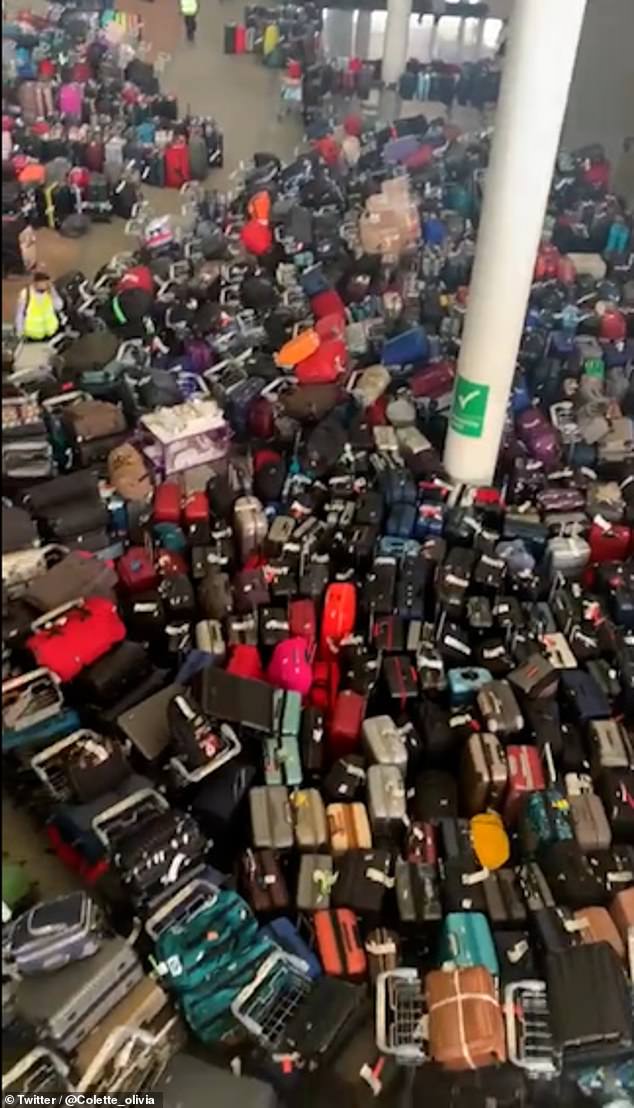 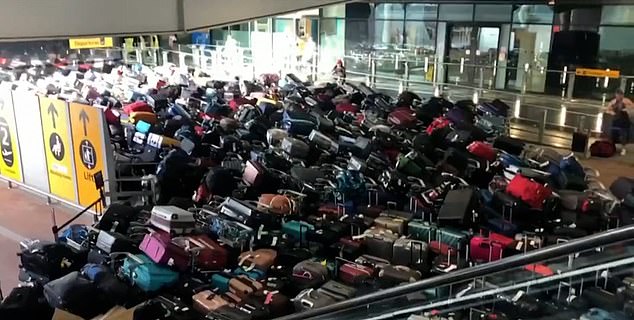 Thousands of workers in the aviation industry were laid-off during the pandemic as flights around the world stopped.

John Holland-Kaye, chief executive of Heathrow, warned it will take 12 to 18 months before the industry can get its capacity back to pre-pandemic levels.

Airports have been urged to cancel more flights over the summer to avoid chaotic scenes – and Gatwick is cutting daily flights in August from 900 to 825 and 850.

This amounts to 4,000 flights being axed throughout the month – with airlines and other airports expected to make cancellations too.

Now a huge spike in demand this year combined with high staff absences due to Covid and other sickness means airports are battling to recruit new staff as quickly as possible.

Next week’s rail strikes will have big impacts on holidaymakers as Tube and train services will be majorly disrupted.

This will also affect airport services with the Stansted Express telling customers to expect a ‘heavily reduced’ service – while Gatwick Express have cancelled all trains for three days next week.

An 82-year-old disabled man tragically died after a fall on an escalator at Gatwick airport this week.

The man had been waiting for assistance to disembark from his flight as he travelled with his wife and son on Wednesday when he decided to leave the aircraft. 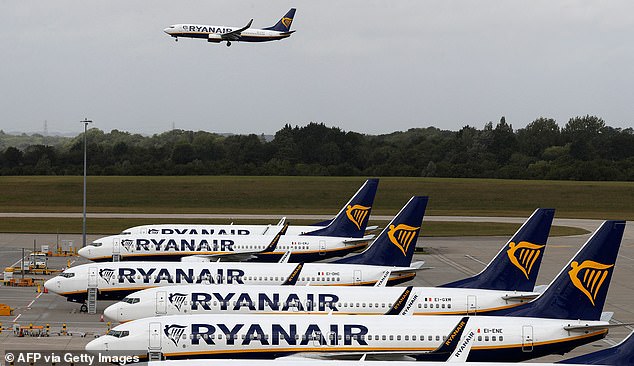 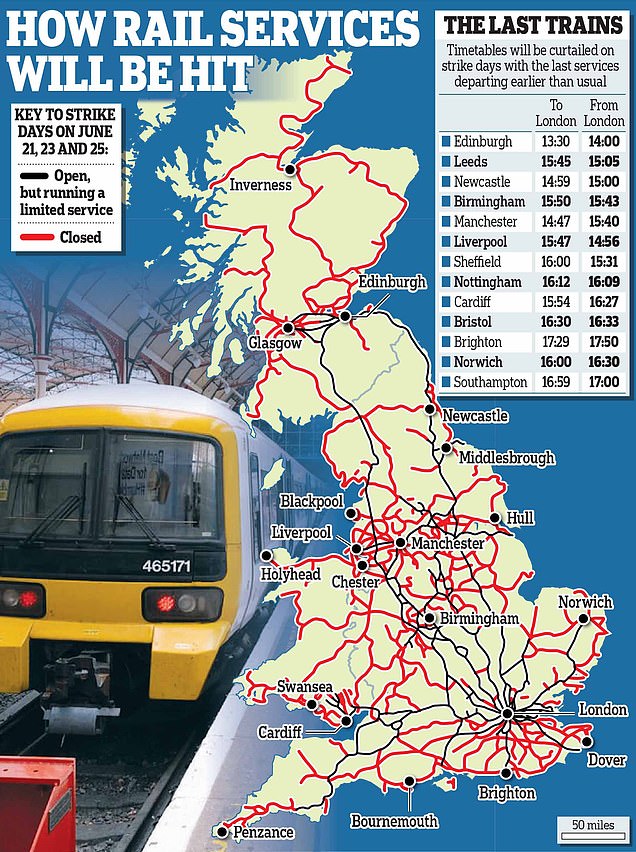 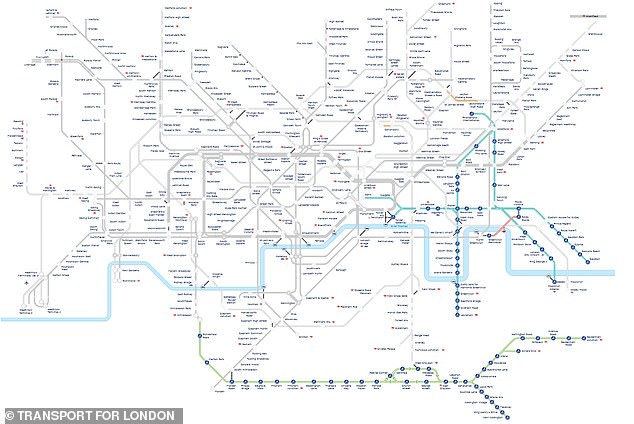 LONDON — This Transport for London map shows greyed-out lines for those that will be affected by disruption next Tuesday all day, and Wednesday morning. ‘Severe disruption or no service’ is expected on all Tube lines from the start of next Tuesday until at least 8am on Wednesday. Only the Croydon Tramlink and Docklands Light Railway are shown as running normally

The holiday plans of Britons were threatened today after Gatwick Express cancelled all trains on three days next week and Eurostar axed dozens of services, as last-minute crunch talks continued with Network Rail.

Rail union leaders accused Grant Shapps of ‘bully boy tactics’ after he warned they are putting their jobs at risk by striking next Tuesday, Thursday and Saturday – and Downing Street said there was ‘still time’ to stop the action.

The Rail, Maritime and Transport Union has demanded inflation-tied pay rises for workers and a guarantee of no compulsory redundancies as part of a national drive to save more than £2bn across Britain’s railway network.

Underpinning the calls for industrial action are also claims that train operators have endured years of pay freezes and changes to their terms and conditions.

The militant union also claims Network Rail plans to cut jobs and reduce spending –with an impact on safety. But Network Rail and the Government have accused the union of an unwillingness to modernise work practices.

It comes as Eurostar became the latest operator to cancel trains with a total of 41 axed to and from the Continent between next Tuesday and Saturday – putting breaks to France, Belgium and the Netherlands at risk. The firm said it was seeing ‘unprecedented contact levels across phone, email and social channels’ after its announcement.

One passenger, Tanja Goossens, tweeted: ‘Eurostar, you just cancelled our international train from Paris to London due to a national train strike in the UK. Are you also going to refund us for having to cut our holiday short now?!’

Gatwick Express trains will also not run on strike days – but there will be limited Southern and Thameslink services running between London Victoria or London Bridge and Brighton, which will call at the airport in West Sussex.

Another social media user, Nadia Holmes, tweeted today: ‘Was so happy that I’m missing the Tube/train strike next week because I’m on holiday… then realised how tf [the f***] am I getting home from Stansted on Thursday?’

His partner is understood to have already been taken off the jet by Wilson – a private firm contracted with helping disabled passengers.

He was left on the plane and was due to be collected when he left on foot with other people filing off who had been on the flight.

The tragedy unfolded on an escalator going up from the runway level to a tunnel that goes into the north terminal known as the Skybridge.

EasyJet staff battled to try and save his life after being first on the scene as the disaster happened as he tumbled on the moving staircase at around 12.50pm.

A source said: ‘A member of staff came to take [a] woman into the airport but the man was left on the plane. He must not have wanted to wait for the staff member to come back so made his own way into the terminal.

‘While on the escalator the passenger fell down and suffered serious injuries as a result and died. This is a tragic incident which should never have happened. Someone should have been helping him.’

This is the latest incident in a string of reports involving disabled passengers being stuck on planes for hours as major staff shortages mean there are ‘no staff’ available to help them disembark.

Many of those flying out of Heathrow on Friday were left fuming as their bags were reportedly left behind after they departed Britain due to a technical ‘glitch’ causing an enormous luggage pile-up.

Hundreds of passengers’ bags and personal belongings were pictured piled up at Terminal 2 of the UK’s busiest airport as passengers faced another round of travel headaches after weeks of continued chaos.

Flightgoers were reportedly warned that they may not receive their luggage for two days. Heathrow apologised to customers and explained the sea of luggage had built up after staff battled an ‘ongoing issue with the baggage system’.

Pictures showing mountains of baggage left abandoned were widely shared on social media and passengers were reportedly told they would not be reunited with them for two days.

And rail passengers were also hit hard ahead of a week of catastrophic strikes next week as a fire on the line at Euston station caused hours of delays for passengers, with some left on trains with ‘no water or air-conditioning’ on the hottest day of the year.

The strikes, happening on June 21, 23 and 25, will be the largest in decades and shut down half of the UK’s rail services.

Some lines will run a limited service, but only between 7.30am and 6.30pm. The public is being advised to only travel if it is absolutely necessary.

The Rail, Maritime and Transport Union has demanded 11% pay rises for workers and a guarantee of no compulsory redundancies in response to a national drive to save more than £2bn across Britain’s railway network.

Liverpool confirm signing of Calvin Ramsay after agreeing £6.5m deal with Aberdeen for the teenager