Frightening footage shows the moment beachgoers were forced to make a mad dash out of the ocean after not one, but two sharks were spotted off a Florida beach over the weekend – the most recent in a swathe of sightings across the east coast.

A resident was able to record the frightening encounter – which transpired Saturday on scenic Neptune Beach, near Jacksonville.

Video shows the two sharks, swimming in clear view of the camera, feet away from several swimmers seemingly unaware of their presence.

Someone can be heard shouting, ‘Get out the water!’ in the bone-chilling clip, which was captured as swimmers rushed out of the knee-deep waters.

Footage shows the sharks swimming in the shallows after the frantic evacuation – which saw no residents hurt but left tensions on high along the north Florida coast.

It came as the most recent in a slew of shark sightings spanning the entire East Coast, thanks to unseasonably high temperatures that have seen the carnivorous animals wander farther north than normal. 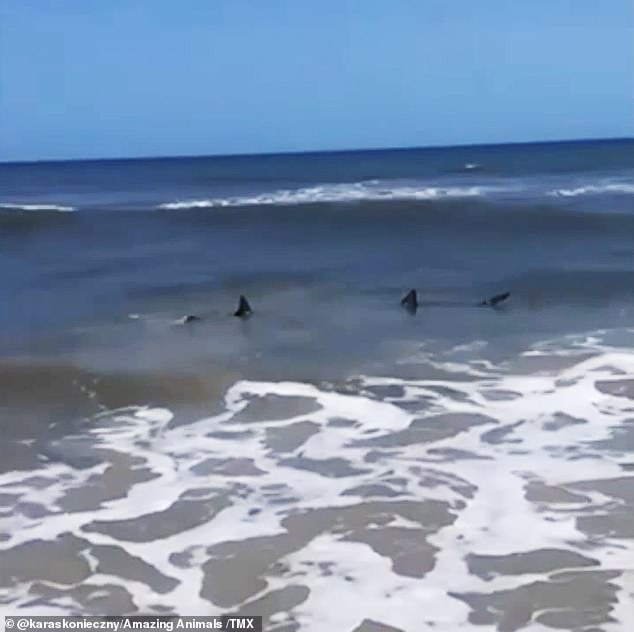 Frightening footage shows the moment beachgoers were forced to make a mad dash out of the ocean after not one, but two sharks were spotted off a Florida beach over the weekend 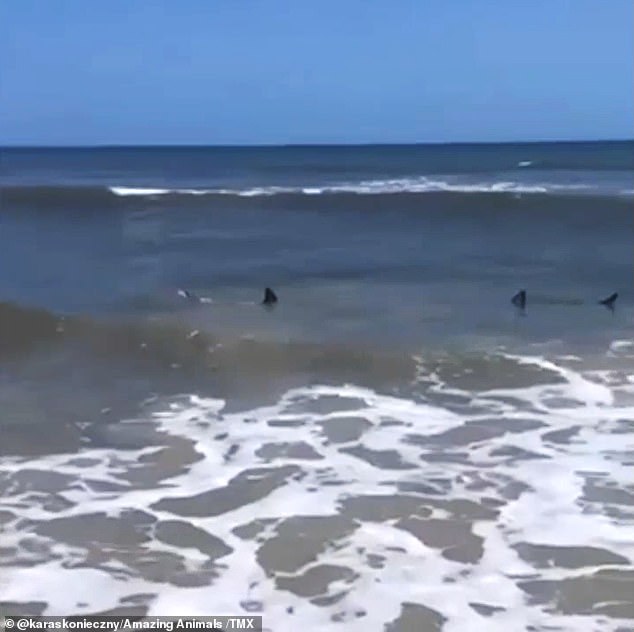 A resident was able to record the frightening encounter – which transpired Saturday on scenic Neptune Beach, near Jacksonville 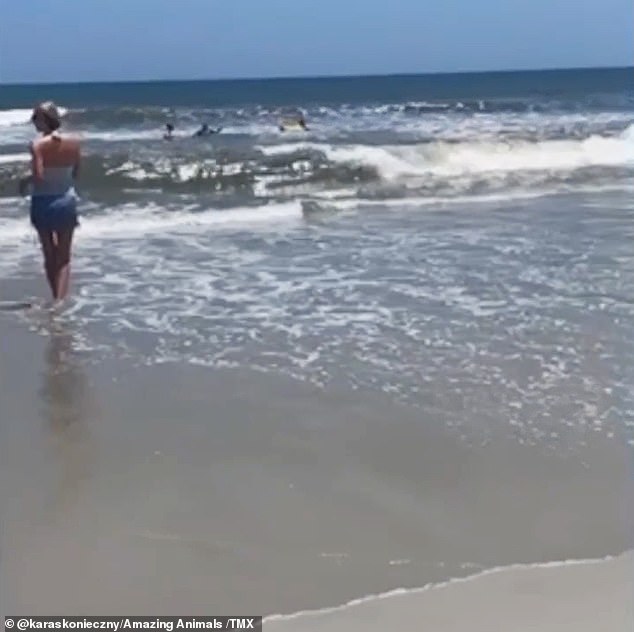 Video shows the two sharks, swimming in clear view of the camera, feet away from several swimmers seemingly unaware of their presence

Attacks have seen the usually shark-free waters around New York overrun – as well as  other northern locations like Massachusetts and Maine.

The out-of-the-usual attacks forcing closures at several popular beaches such as those in Cape Cod and Long Island – with another in Maine shutting down after a citizen reportedly spotted a Great White.

Attacks in the Sunshine State have been frequent – with some leaving beachgoers badly bitten and barely escaping with their lives.

Nearby in Jacksonville, just miles away from Neptune Beach, another shark was spotted Saturday – with one resident reportedly bitten by the beast.

The attack left the unnamed man’s shin reportedly ‘left in shreds’ – as other swimmers looked on at the carnage in horror, according to witness Robert Alexander.

Alexander, who rushed out into the water along with a lifeguard to aid the man after hearing screams, described seeing the water red with blood immediately after the attack – and the shadow of a 6- to 7-foot shark wading roughly 10 feet underwater.

Alexander recounted to Jacksonville outlet News4JAX how he pulled the bleeding man to safety after scaring the shark away – an act of heroism that likely saw the man’s life saved.

‘I started splashing, making a lot of loud noises and next thing I know it was kind of tunnel vision, and I grabbed him, put him on his boogie board,’ Alexander said, adding that he was aided by the lifeguard in the rescue.

The man reportedly suffered severe injuries to his leg as a result of the attack, which Alexander said had been ‘pretty much in shreds’ from his shin down to his foot. 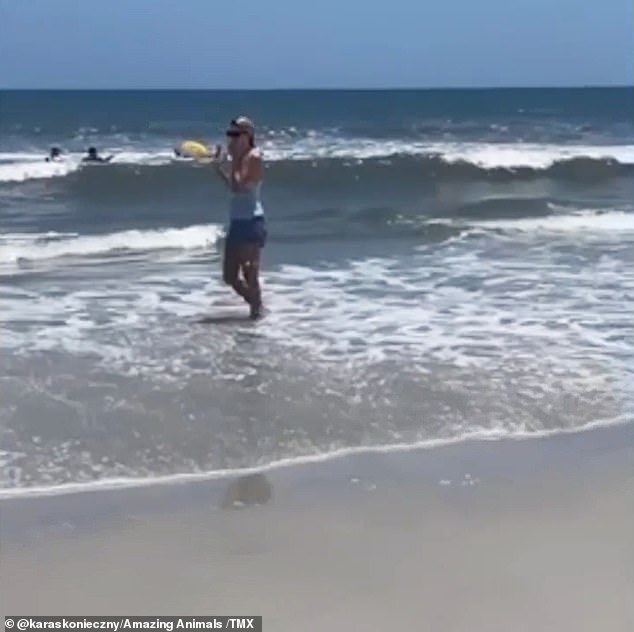 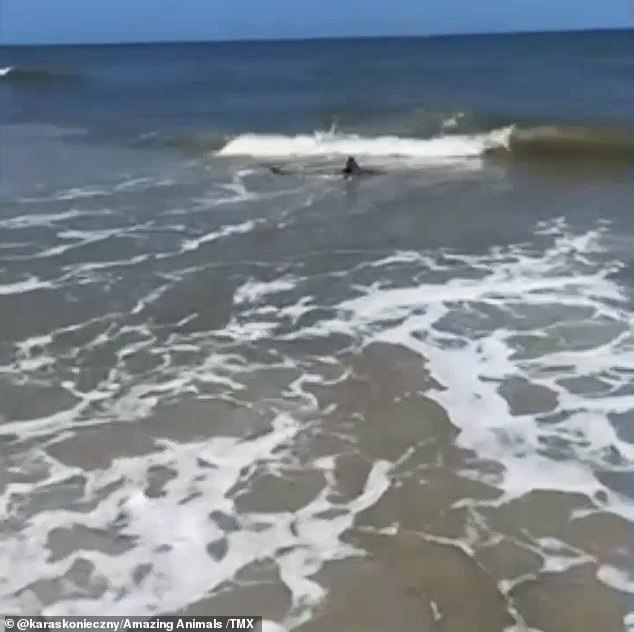 Shark attacks and sightings have been on the rise as of late, forcing closures all across the Atlantic from Florida to Maine

More than 1,000 miles north along the Atlantic coast, bites have also been frequent, spurring multiple closures and New York Gov. Kathy Hochul to issue an order to state agencies to increase shark surveillance.

The order followed a series of ‘Jaws’-like attacks off Long Island that saw four bitten after several sightings across multiple beach communities.

Prior to 2022, there were only 12 recorded unprovoked bites in New York’s history, including four from the past decade, according to the International Shark Attack File at the Florida Museum of Natural History.

‘We are taking action to expand patrols for sharks and protect beachgoers from potentially dangerous situations,’ Hochul said while announcing the order at a press conference in New York’s Suffolk County earlier this month.

‘I encourage all New Yorkers to listen to local authorities and take precautions to help ensure safe and responsible beach trips this summer.’

The governor said that heightened safety measures would include the deploying patrol boats, drones, and helicopters along the Sound’s South Shore, as well as increased public outreach to residents on the dangers of the marine predators.

‘Whether it’s land, sea or air,’ the governor said, ‘we are going to be having more robust patrols on the shorelines.’

Since July 3, the New York-area has seen four shark bites at three different beaches on Long Island, as well as another six shark sightings, according to PIX11.

Out on the island, about 80 miles from Rockaway, the village of Quogue is asking area swimmers and boaters to be careful after a dead, 7-8 foot shark washed ashore. 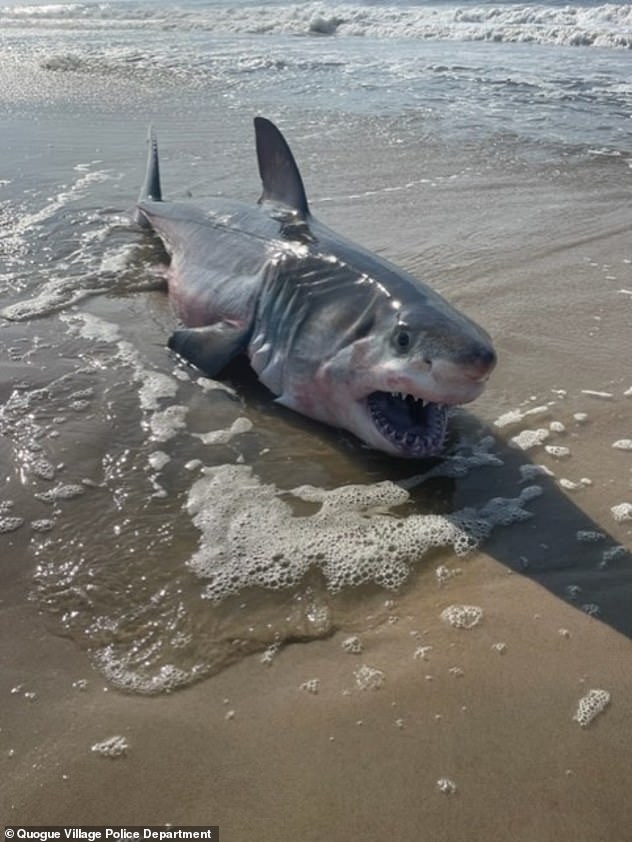 Earlier this month on Long Island, about 80 miles from Rockaway, a 7-8 foot shark washed on the beach off the small village of Quoge 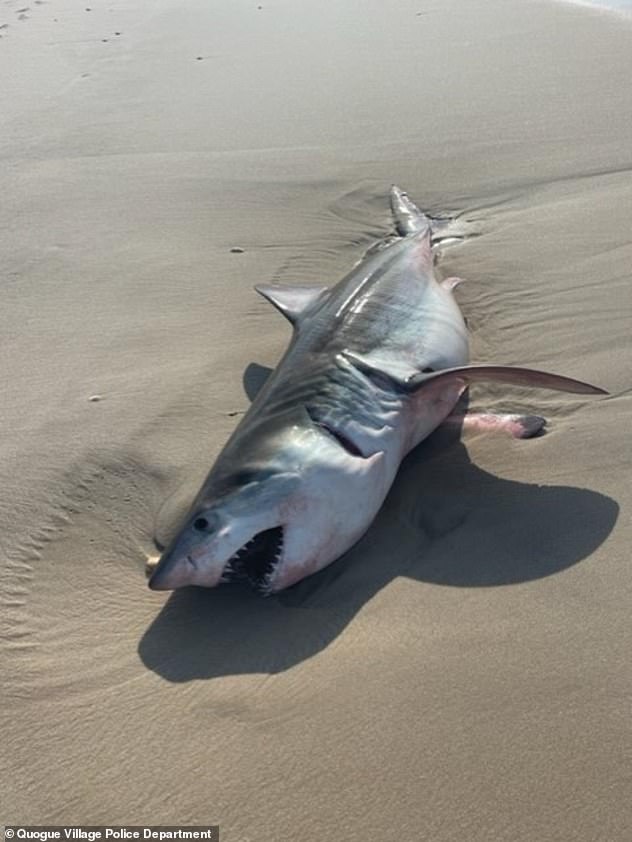 The sighting was reported by a resident of the area and washed out to shore before it could be secured by the authorities, according to Lieutenant Daniel Hartman 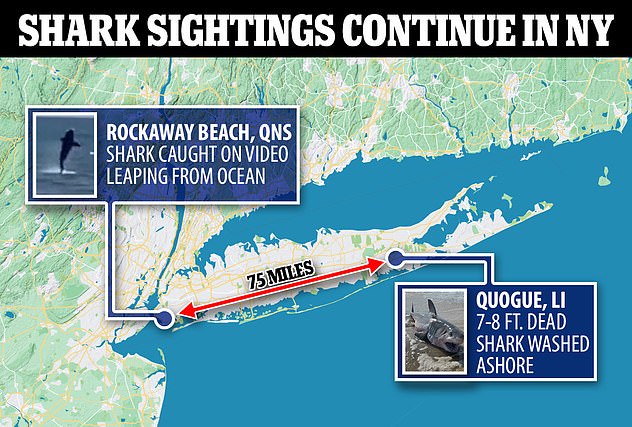 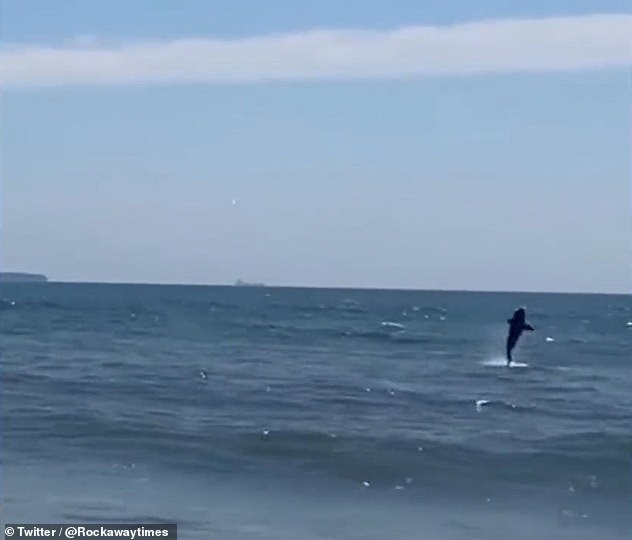 Shark sightings continue to plague New York-area beaches, with a video captured of one leaping from the water in Queens 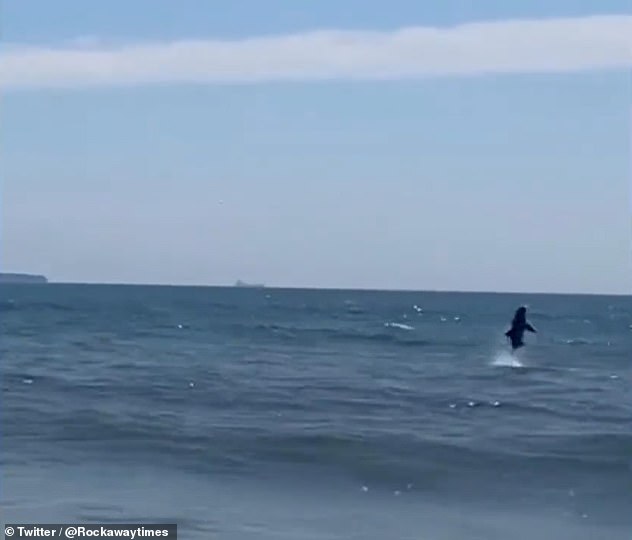 The video, captured by the Rockaway Times , sees the shark emerging from the Atlantic Ocean briefly to do a little spin before returning to the water

The sighting was reported by a resident of the area and washed out to shore before it could be secured by the authorities, according to Lieutenant Daniel Hartman.

Police in the region are in touch with local shark researchers to see what can be done and are asking people to contact them if it is seen again.

Over six miles of ocean beachfront were closed between East Atlantic Beach and Long Beach last week as a result of the attacks. Those beaches have since opened, but are still on high alert.

The Florida of Natural History and the University of Florida’s International Shark Attack File (ISAF) reported that there have been six possible bites at Big Appel beaches from June 30 to July 20, 2022.

Close by in Massachusetts, tens of confirmed sightings forced closures Cape Cod, according to the Atlantic White Shark Conservancy’s Sharktivity app, with multiple sightings reported off of Nauset Beach and North Beach Island.

The app recorded 25 sightings in the past two days alone – with the most recent issued Saturday morning after a shark was spotted off Nauset Beach about 75 yards off shore.

Dozens of white shark sightings have been reported in the area in the past week, fueled in part by the unseasonably high temperatures couple with recent conservation efforts to protect native shark species.

Sightings have been made as far north as Maine, with the state’s most popular beach, at Popham Beach State Park, closed Wednesday after a shark sighting at roughly 5:20pm.

Residents also reported another unconfirmed sighting nearby off Small Point, last week, as beaches continue to close in the face of the flood of sightings.

The odds of getting fatally attacked by a shark remain less than 1 in 4 million, according to the International Shark Attack File. 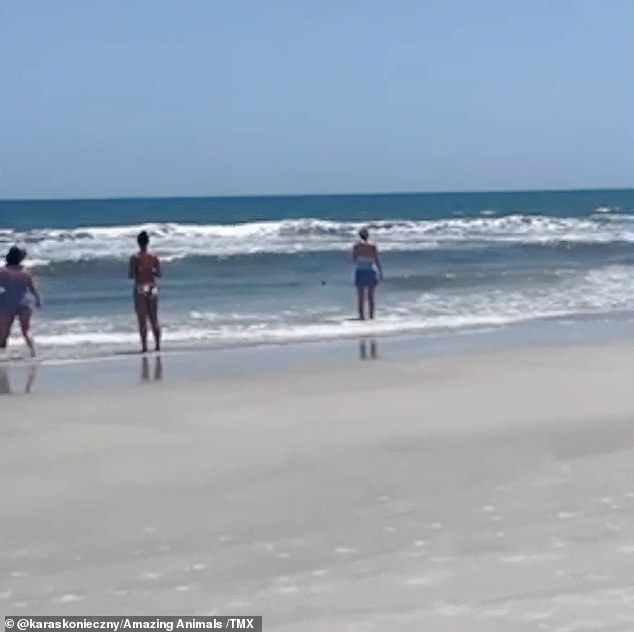 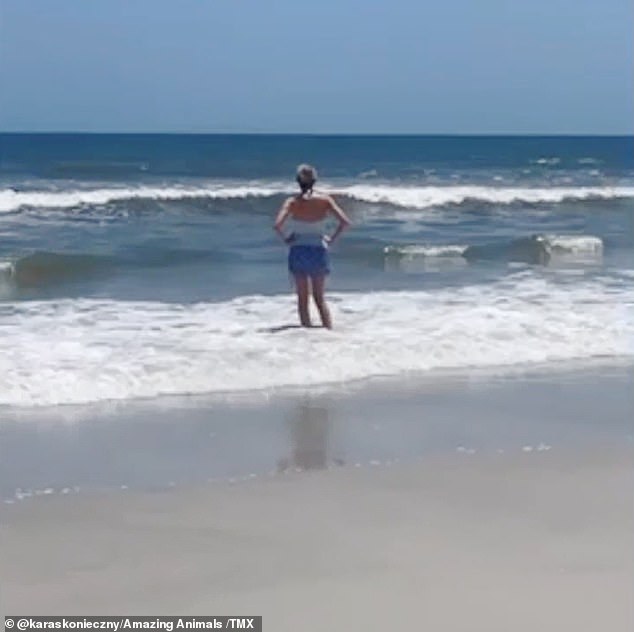 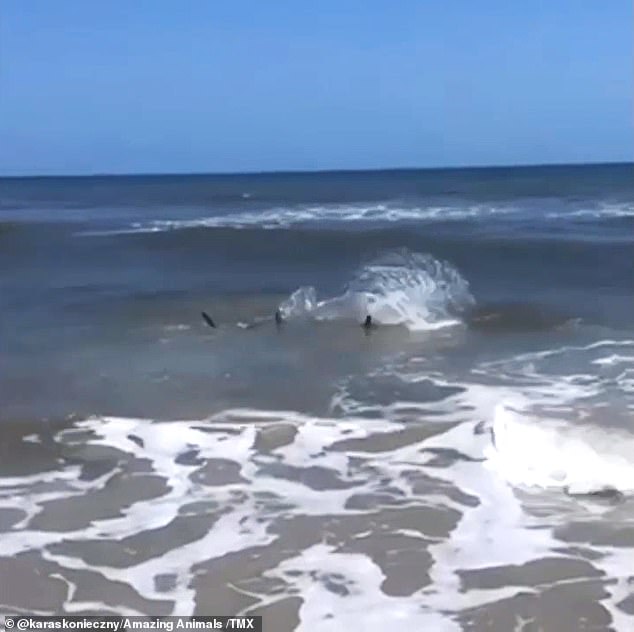 The odds of getting fatally attacked by a shark remain less than 1 in 4 million, according to the International Shark Attack File