Texas deputy chasing a robbery suspect at speeds of up to 90mph smashes into another vehicle killing the mother and injuring two child passengers, aged two and five

A Texas mother was killed and several other people, including her two children, were injured overnight when a sheriff’s deputy chasing a robbery suspect at speeds reaching 90mph blew through a red light and crashed into the woman’s van.

The fiery, multi-vehicle collision took place shortly before 11pm at the intersection of Laura Koppe Road and Lockwood Drive in Harris County.

According to the authorities, the Harris County Sheriff’s deputy, who has not been named, was on his way back to the office when he heard a call about a robbery at a gas station, reported KHOU11.

The deputy was searching for the suspect when he heard a call about an armed robbery at a CVS. He then spotted a man in a mask exiting the pharmacy and getting into a vehicle that matched the description of the car in connection with the gas station robbery. 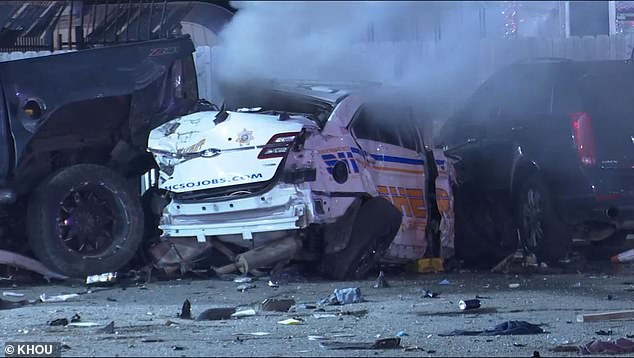 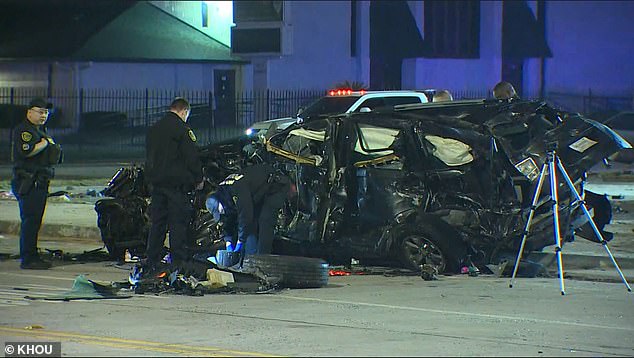 The female victim was behind the wheel of this black car when the deputy, who was pursuing a robbery suspect at speeds reaching 90mph, smashed into her

The deputy was said to have attempted to stop the suspect, but the man drove off. A chase ensued, with speeds reaching 90mph.

According to the Houston Police Department, the deputy was driving eastbound on Laura Koppe with his lights and sirens on when he smashed into a black vehicle carrying a woman and her two children, ages 2 and 5.

Authorities said the fiery crash, which was partially caught on surveillance video, killed the mother and critically injured her older child. The toddler was hospitalized in stable condition.

The female victim has not been identified as of Thursday.

‘First and foremost, on behalf of the Harris County Sheriff’s Office I want to extend our condolences to the family of the deceased female and we are also praying for the full recovery of the two children that have been injured in this crash,’ Harris County Sheriff Ed Gonzalez said during a news conference overnight.

That initial crash set off a chain reaction, injuring three occupants of five vehicles. Those victims were hospitalized with minor injuries.

Good Samaritans who witnessed the incident came to the deputy’s aid and pulled him out of his burning patrol vehicle. He was taken to a hospital in stable condition. 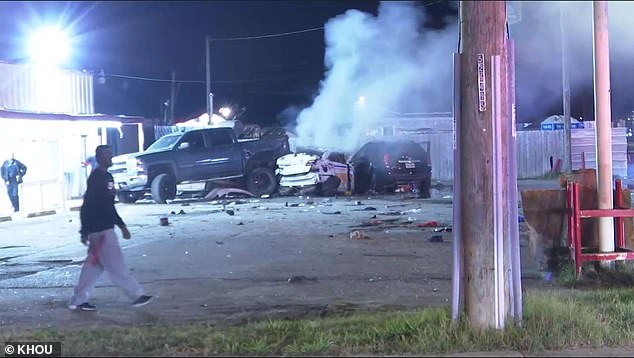 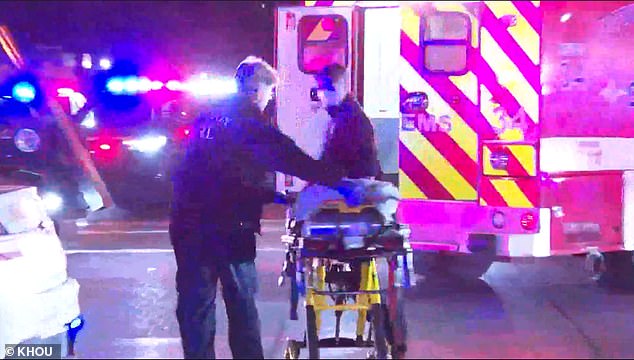 The female driver’s 5-year-old child was hospitalized in critical condition, and her 2-year-old was stable. Pictured: a victim is being wheeled away from the scene

‘The police car was on fire so me and two more gentlemen climbed over the car, got him out, pulled him, took him inside the store, checked his pulse, made sure he was breathing. Got him to stay with me, I said, “Keep your eyes up. Stay with me. Help is on the way.” And I’m just thankful that I was where I was with those two gentlemen with me because I couldn’t have gotten him out by myself,’ one of the rescuers told ABC13.

Meanwhile, the suspect in the robbery who sparked the deadly chase got away and was being sought by the police.