That’s some beefcake! Meet Rambo, the superstud bull who has sold for record-breaking £189,000

The Limousin was declared champion at the breed’s spring show in Carlisle before being put up for auction.

Competition judge Patrick Greaney described him as the best bull he had ever seen.

Rambo was sold by Welsh breeder Gerwyn Jones to a partnership of two herds from Cumbria and Cheshire.

Iain Scott, speaking for the buyers, said after Saturday’s sale: ‘Rambo is possibly the best bull we have seen offered. He will be going straight to stud.’ 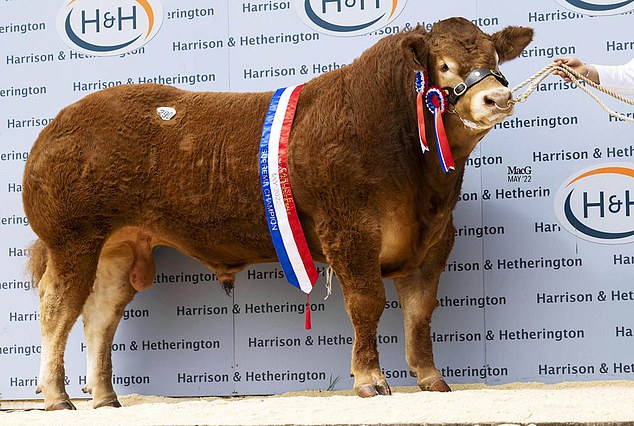 Looking pleased with himself: Rambo the world record-breaking bull is pictured after he was sold for a world record price of £189,000

Mr Greaney said: ‘He is 100 per cent correct with power throughout – a super top and without the coarseness that can sometimes come with this.’

He added: ‘I slept well the night before the judging, but I didn’t sleep well once I had seen him. I knew an incredible sale would be coming.’

Speaking on behalf of the two buyers, farm manager Iain Scott said: ‘Rambo is possibly the best bull we have ever seen offered for sale at Carlisle. His breeding line is exceptional. He has width, depth of muscle as well as being correct on his feet and legs.

‘With all the previous attributes, he still retains his breed character through his head. Rambo will be going straight to stud to have semen taken.’

Mr Jones told the British Limousin Cattle Society after the weekend sale: ‘After working with experienced breeders for a long time, I knew Rambo was something special, which was confirmed by the interest and offers received at home prior to the sale.

‘Due to the attention he was attracting, I was concerned it may deter under bidders, thankfully this was not the case. I am delighted that my first pedigree registered Limousin has sold so amazingly well.’

Meanwhile, the next-best price of £31,500 was paid for the reserve overall champion.

This was April 2020-born Goldies Relish from Dumfries breeder Bruce Goldie. By Ampertaine Opportunity, and out of Goldies Harmony, he sold to the Mash family’s Buckinghamshire-based Brockhurst herd.