Senator Roger Marshall said today he plans to introduce a ‘Fauci Act’ which would force the publication of financial interests after Chief Medical Advisor Dr Anthony Fauci called him a ‘moron’ during a Senate panel clash.

The Republican senator said he would propose a bill which would require the Office of Government Ethics (OGE) to provide the financial records for government officials whose information is not already public.

The legislation, titled the Financial Accountability for Uniquely Compensated Individuals (FAUCI) Act, came after Marshall and Fauci had a heated back-and-forth during which the doctor called the senator a ‘moron’.

Fauci claimed he had called Marshall a ‘moron’ because he didn’t know government employees’ financial disclosures were public, but the Kansas Republican has claimed that the infectious disease expert’s records have not been made public since the start of the pandemic.

Marshall asked:’As the highest-paid employee in the entire federal government, yes or no, would you be willing to submit to Congress and the public a financial disclosure that includes your past and current investments?’

‘I don’t understand why you’re asking me that question,’ Fauci responded. ‘My financial disclosure is public knowledge and has been so for the last 37 years or so, 35 years.’

Fauci was then caught on his mic saying ‘What a moron, Jesus Christ!’ 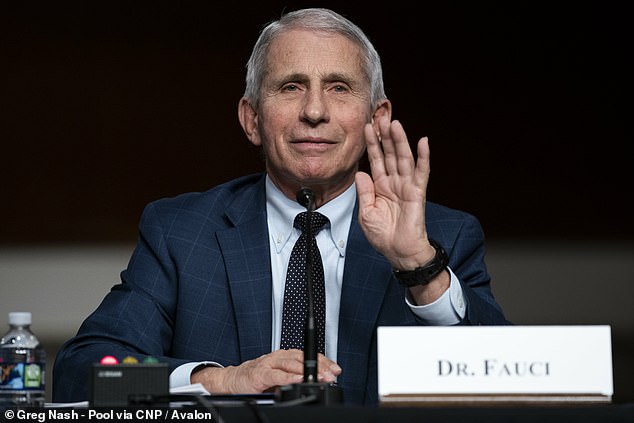 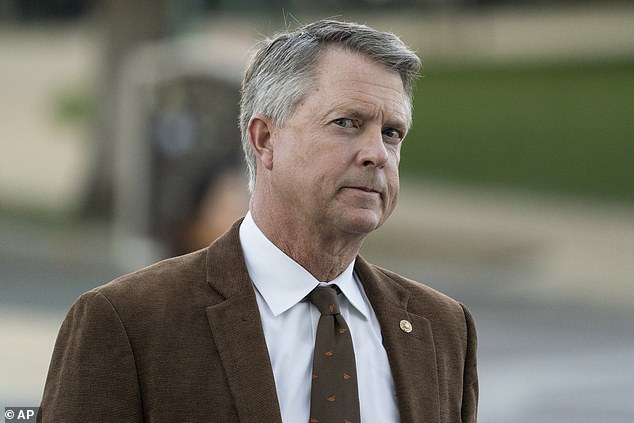 In the wake of the terse exchange on Tuesday night, Fauci told MSNBC’s All In with Chris Hayes it was ‘stunning to me’ that Marshall was not aware ‘my financial statement is public knowledge’.

Publicly available is a financial disclosure form signed by Fauci in April 2020 that covers his transactions for 2019, a document fraught with redactions.

Conservative group Judicial Watch has filed suit after the National Institutes of Health, which falls under Health and Human services, failed to respond to three FOIA requests from January to September 2021 for Fauci’s employment contracts, daily calendars, confidentiality agreements, recent financial disclosures and a list of royalties paid.

‘Dr. Fauci was clearly shaken by my simple line of questioning. Instead of agreeing to publicly provide his financial disclosures, he chose to spin the truth and once again mislead the American people,’ Marshall told DailyMail.com of the exchange.

‘Considering he is the highest paid employee in the entire federal government, Dr. Fauci needs to make his financial disclosures easily accessible to the public and lay all his cards on the table.’

Fauci had said that if the senator were looking for his financial records, ‘all you have to do is ask.’ Marshall claims his office cannot find Fauci’s records. 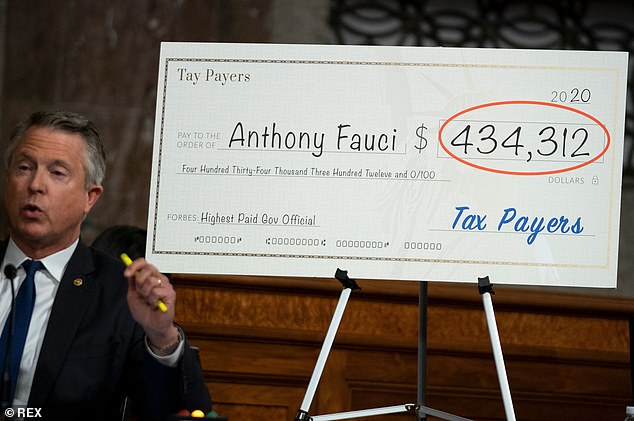 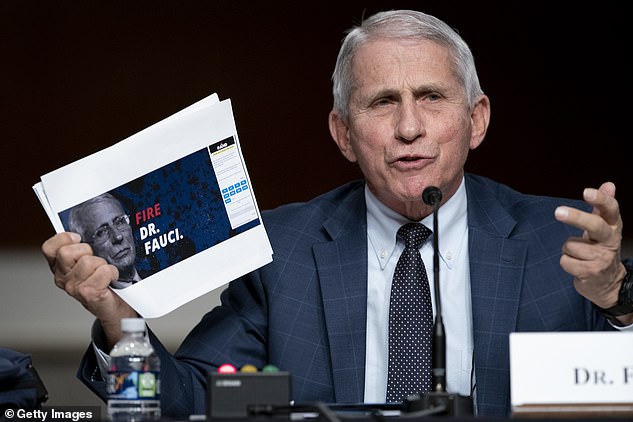 The information in OGE Form 278e, requested by Center for Public Integrity reporter Liz Essley Whyte and signed by Fauci in April 2020, shows that the 81-year-old mostly invested in equity funds, bond funds and money markets. It did not contain any individual pharmaceutical stocks.

Much of the document contains information from Fauci’s Schwab One Trust Account with financial services company Charles Schwab.

It also shows Fauci listed as an editor and associate at McGraw-Hill Publishers, beginning in 1983, and according to the 2020 filing, he has received royalties amounting to between $100,001 and $1,000,000 for editing the textbook Harrison’s Principles of Internal Medicine.

He also has a stake in San Francisco Italian restaurant Jackson Filmore, valued at between $1,001 and $15,000.

As Forbes contributor Adam Andrzejewski noted on Wednesday: ‘It’s not public what stocks and bonds Dr. Fauci bought and sold in 2020 or 2021, as he influenced Covid policies.’ 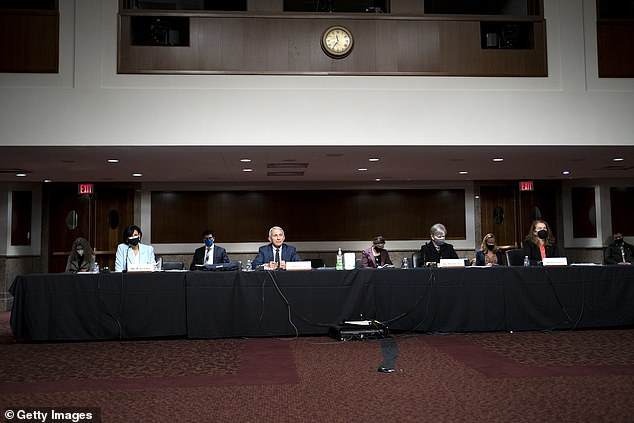 Marshall had suggested with his line of questioning at the Tuesday hearing that Fauci, who brings in a $434,212 annual salary, was engaging in insider trading.

‘It just is an example, again, he was implying, if you listen to the entire dialogue, that in my position responsible for drug trials and having so-called inside knowledge of what drug works and what drug doesn’t work, that maybe I was making investments sort of like ahead of the game here,’ Fauci told Hayes.

‘He was totally implying that, and he made the statement that we can’t get your financial statement,’ Fauci continued.

Hayes said that Fauci, President Joe Biden’s top medical adviser and the director of the National Institute of Allergy and Infectious Diseases, was a ‘little frustrated with that line of inquiry’ from Marshall, a Kansas Republican.

After Marshall’s time was up, the infectious disease expert could be heard sighing: ‘What a moron, Jesus Christ.’

He and the Centers for Disease Control and Prevention Director Rochelle Walensky appeared before the Senate panel to defend the Biden administration’s response to the Covid-19 pandemic as it nears the end of its second year and with the administration and agency facing a crisis of confidence and trust.

Senator Roger Marshall: You have an annual salary in 2020 was $434,000. You oversee over $5 billion in federal research grants as the highest paid employee in the entire federal government. Yes or no: would you be willing to submit to Congress and the public a financial disclosure that includes your past and current investments? After all, your colleague Dr. Walensky, and every member of Congress submits a financial disclosure that includes their investments.

Fauci: I don’t understand why you’re asking me that question. My financial disclosure is public knowledge and has been so for the last 37 years or so — 35 years — they’ve been directly —

Marshall: But the big tech giants are doing an incredible job of keeping it from being public. We’ll continue to look for it.

Marshall: Where would we find it?

Marshall: Why am I misinformed? This is a huge issue. Wouldn’t you agree with me that — that you have a — you see things before members of Congress would see them, so that there’s an air of appearance that — that maybe some shenanigans are going on? You know, I don’t think that that’s — I assume that’s not the case.

Fauci: Wha are you talking about? My — my financial disclosures are public knowledge and have been so. You are getting amazingly wrong information.

Fauci: — What are you talking about?

Marshall: Our office cannot find them. Where would they be if they’re public knowledge? Where?

Fauci: It is totally accessible to you, if you want it.

Marshall: Great. We look forward to reviewing it.

Fauci: You are totally incorrect.

Marshall: Well we look forward to reviewing it.

Murray: Senator Marshall, Dr. Fauci has answered you. It is public information and he’s happy to give it to you if you were to ask. [Moving to next Senator] Senator Moran.

SARAH VINE: The problem with the wife is she knows you’re not Master of the Universe