The prison pen pal turned third wife of late Louisiana Governor Edwin Edwards has gone to war with his adult children – who are all more than two decades older than her – after she allegedly had his remains exhumed and cremated without telling them.

Trina Edwards, 43, had her husband’s corpse dug up from a cemetery in Baton Rouge just 10 weeks after he was laid to rest, following his death aged 93 back in July.

His ashes currently sit on a nightstand in the home she shared with Edwards in Gonzalez while she decides on a final resting place.

The move has drawn the ire of the Democratic governor’s three eldest children – Anna, Stephen and Victoria – who claim the widow ignored their father’s wishes and that the reality star is trying to claw back her ’15 minutes of fame.’

Edwards, a four-term governor who served eight years in prison for corruption, was married three times and has five children. 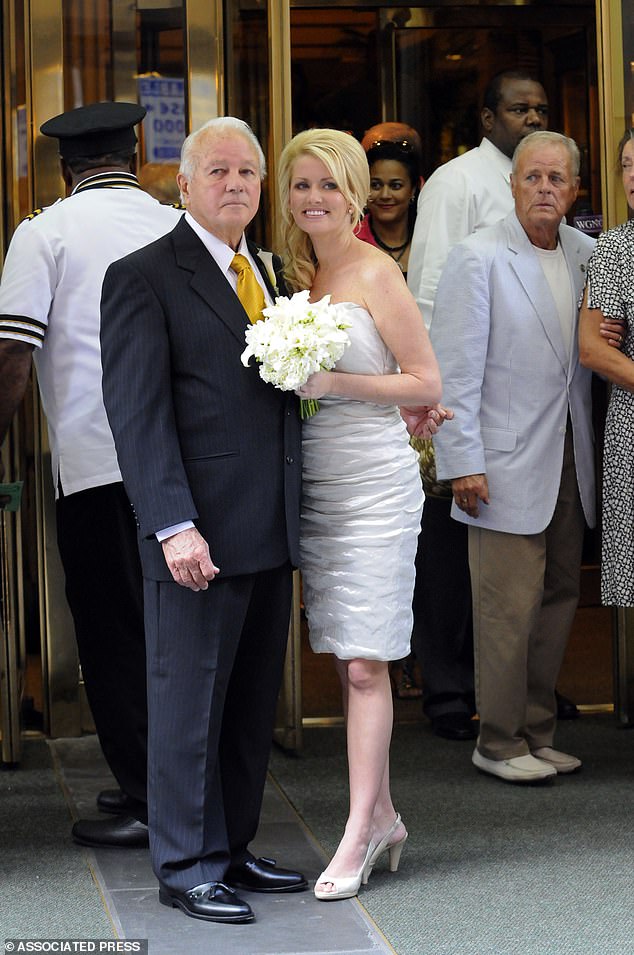 The prison pen pal turned third wife of late Louisiana Governor Edwin Edwards has gone to war with his adult children after she allegedly had his remains exhumed and cremated without telling them. Trina Edwards with Edwin Edwards on their 2011 wedding day 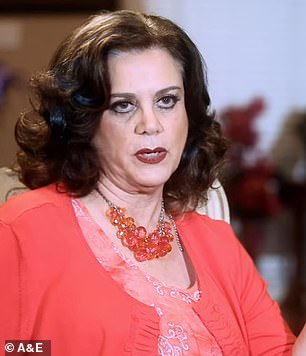 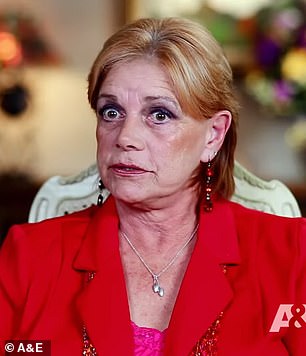 Edwards’ adult children Anna (right), Stephen and Victoria (left) have blasted the widow claiming she ignored their father’s wishes not to be cremated and froze them out

His four eldest children – Anna, Victoria, Stephen and David – are from his first marriage to Elaine Edwards. The couple – who met in high school and were married for 40 years – divorced in 1989 and she died in 2018.

Edwards then wed Candy Picou in 1994 but she divorced him following his racketeering trial and conviction.

It was while Edwards was behind bars that he struck up a relationship with Trina Grimes Scott who – at 51 years his junior – began writing to him in jail.

On his release, the couple wed and welcomed a son Eli, who is now eight, using sperm the governor froze a decade earlier. They also starred in a reality TV series called The Governor’s Wife.

But, David is the only child from her late husband’s first marriage who she still speaks to regularly following his death and – after she cremated Edwards’ remains – her relationship with his kids appears to have soured further.

Anna, Stephen and Victoria have spoken out this week in an interview with The Advocate to condemn her decision to cremate their dad without their knowledge as they claim he ‘hated’ the thought of being laid to rest that way.

Stephen said cremation went against his father’s religious beliefs – something he made clear long before his death.

‘He was one of the large group of Christians who believed that if you’re in this world and are cremated, your soul cannot go to heaven,’ he said.

‘He made that well known to all of us and his friends.’

Instead, Edwards had told him he wished to be laid to rest at the Port Hudson National Cemetery, after he served as a pilot in the Navy in World War II, said Stephen. 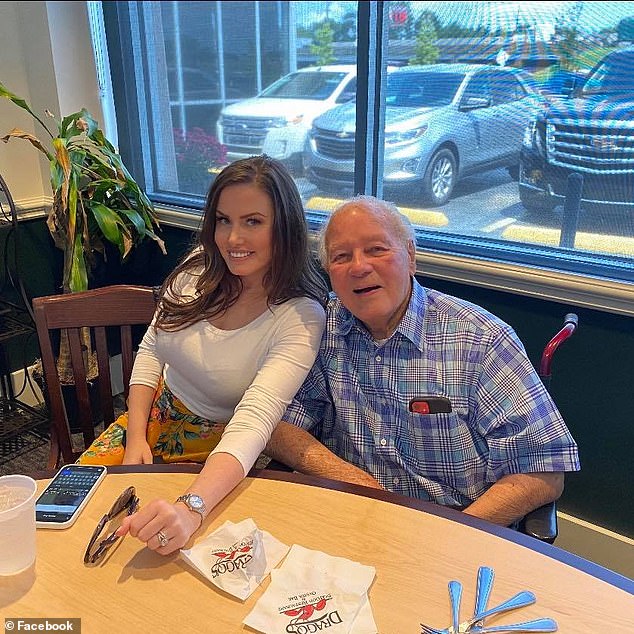 Edwards was in prison for corruption when he struck up a relationship with Trina Grimes Scott. On his release, the couple wed and welcomed a son Eli. The couple above 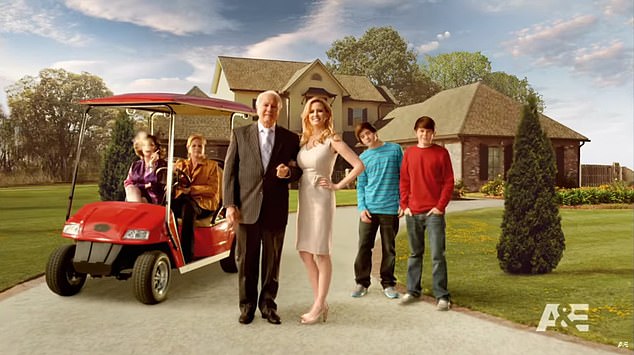 Victoria added that cremation ‘is one of the things my father swore he never wanted. He hated that idea.’

What made matters worse, they said, was that Trina did not consult with his adult children before barreling ahead with her plans.

Anna revealed she was ‘astonished and horrified’ when she learned about her father’s remains being dug up and cremated in a text message.

‘I was beyond shocked,’ she said.

‘I can remember many conversations with my dad over the years about death and burial. He did not like the idea of being cremated.

‘He thought it was abominable. He was horrified that I want to be cremated.’

Victoria also suggested her stepmom may have been motivated by her pursuit of fame.

‘She has lost her 15 minutes of fame and desperately wants to get it back,’ she said.

While the siblings agreed that their stepmother took good care of their father in his last years, they claimed she began freezing them out as soon as he passed away from respiratory complications on July 12. 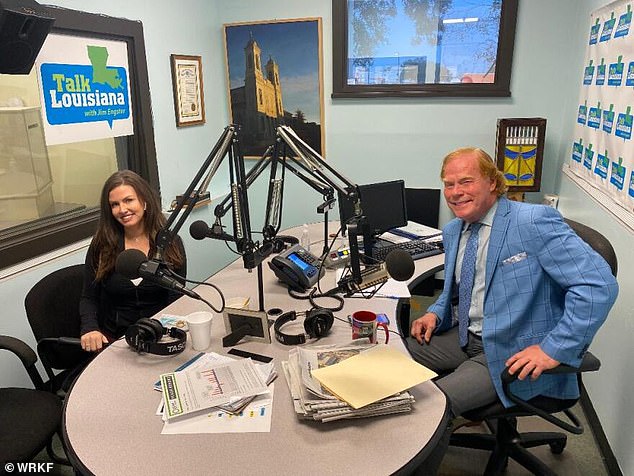 Trina slammed her late husband’s children, denying that she cremated him without telling them on a radio show this week (above) 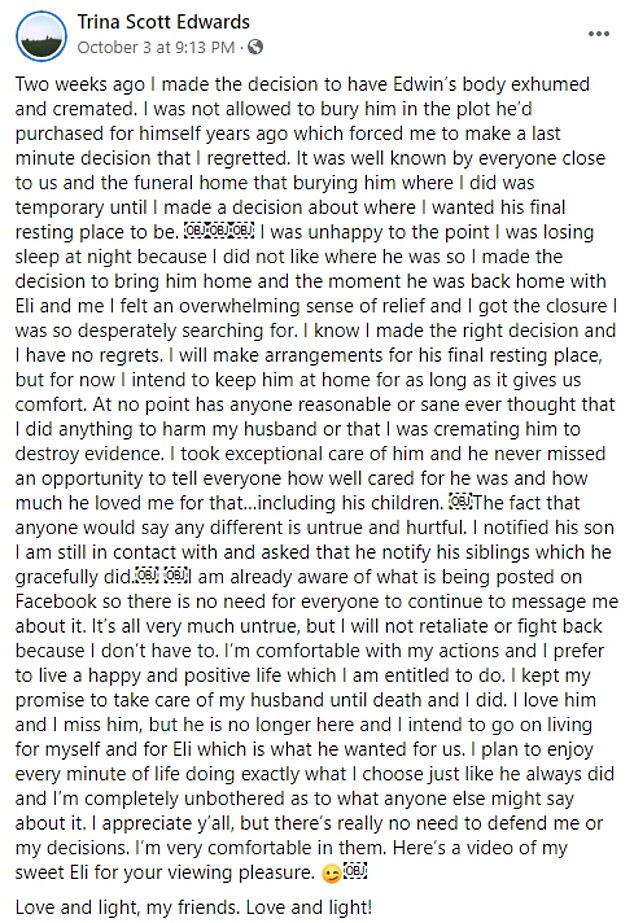 The widow first spoke out about the family rift on Facebook on October 3, writing a lengthy post where she pushed back at any allegations she cremated him to destroy evidence

Stephen said Trina didn’t allocate them seats at his funeral service, leaving him forced to find the first available seat at the back.

However, Trina has slammed her late husband’s children for airing their dirty laundry in public, claiming they barely saw their father in his final years and that they didn’t know their father’s wishes for his burial.

Trina told The Advocate that his family knew all along that his burial was temporary.

‘They knew when I buried him there. Everyone knew that it was temporary, so I’m honestly just I totally don’t understand what the problem is or why they’re being like this,’ she said.

Trina claimed she then reached out to David about her plans to exhume and cremate his remains and was told that nobody was opposed to the idea.

She also insisted she took his adult kids ‘into consideration with every plan’ for his funeral and did provide seats for them but was in such grief on the day that she was unaware they had trouble finding them.

David did not comment to The Advocate about his version of events or the rift between his siblings and stepmother.

Trina also said she spoke at great length with her husband about his funeral arrangements and final wishes leading up to his death – something she said he didn’t do with his adult kids. 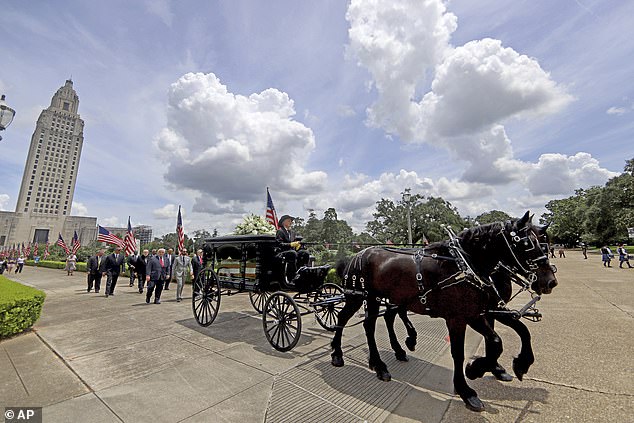 A horse-drawn carriage carries former the remains of Edwards away from the Louisiana State Capitol in Baton Rouge, Louisiana, in July

‘As far as I’m aware he never discussed anything that was going to happen after his death with any of his children,’ she said.

‘What Edwin told me about where he wanted to be buried, these are his words, ‘As my surviving widow it is up to you to decide what happens after I die.’

While she said she quit her job to care for her ailing spouse, she accused his children of barely seeing him in his later life and claimed they didn’t help care for him.

‘I quit my job to take care of him, which I did, and I took excellent care. And he loved me and he was comfortable enough with me to put me in charge,’ she said.

The 43-year-old said she understands that people ‘handle grief differently’ but expressed regret that her stepkids were gearing up for a ‘public fight.’

She vowed not to be drawn into the drama.

‘I regret his family feels the need to try to engage me in a public fight, but I will not dishonor my husband’s memory by participating,’ she told the Advocate. 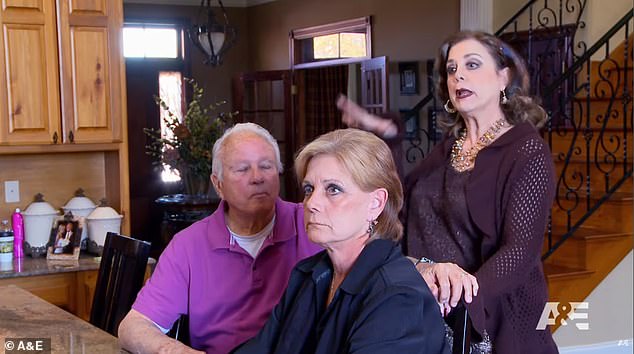 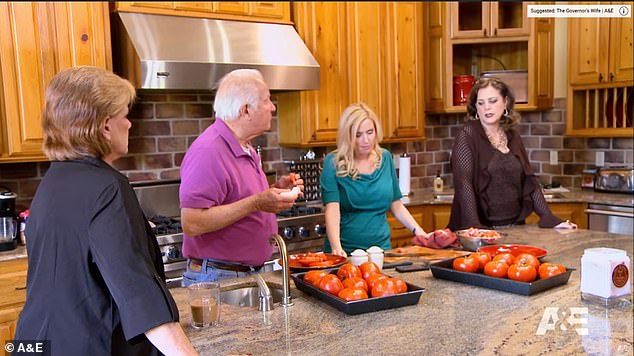 ‘I wish his family nothing but health, happiness, and comfort as they begin to navigate their lives without their father and I sincerely pray they will someday find peace. I believe my husband would have wanted that for us all.’

The widow first spoke out about the family rift on Facebook on October 3, writing a lengthy post where she pushed back at any allegations she cremated him to destroy evidence.

‘At no point has anyone reasonable or sane ever thought that I did anything to harm my husband or that I was cremating him to destroy evidence,’ she wrote.

‘I took exceptional care of him and he never missed an opportunity to tell everyone how well cared for he was and how much he loved me for that…including his children.

‘The fact that anyone would say any different is untrue and hurtful.’

Trina said the initial burial came about after she ‘was not allowed to bury him in the plot he’d purchased for himself years ago which forced me to make a last minute decision that I regretted.’

The widow said the last minute decision left her ‘unhappy to the point I was losing sleep at night’ and so she decided to ‘bring him home’ to do what was best for her and their son. 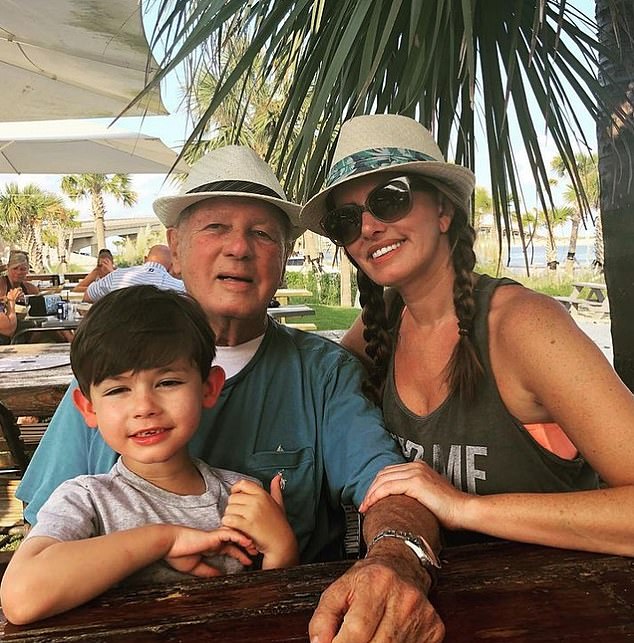 Edwards with Trina and their son Eli, who is now 8. There was a 51-year age gap between the couple 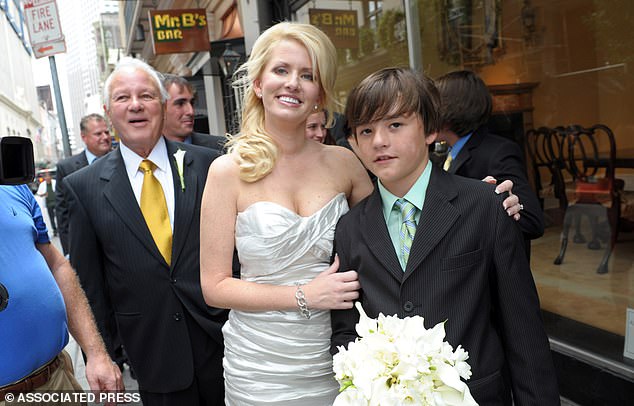 Edwards and Trina on their wedding day with one of her sons from a previous marriage. When they wed, Edwards was 83 and she was 32

‘The moment he was back home with Eli and me I felt an overwhelming sense of relief and I got the closure I was so desperately searching for,’ she said.

Trina reiterated that she told Edwards’ other children before exhuming her husband.

‘I notified his son I am still in contact with and asked that he notify his siblings which he gracefully did,’ she wrote.

‘I am already aware of what is being posted on Facebook so there is no need for everyone to continue to message me about it.

‘It’s all very much untrue, but I will not retaliate or fight back because I don’t have to.’

Trina also spoke out about the escalating drama in a radio interview for Talk Louisiana where she defended her actions saying she was in a ‘really bad place’ when she first decided to bury Edwards.

‘Originally he had a plot at Resthaven which is where he was going to be buried and a lot of things happened and I was not allowed to bury him there, so I had to make a very last minute decision and I knew that eventually I was probably going to have him moved somewhere else so I just chose the easiest most available place which I wasn’t happy with afterwards,’ she said.

‘I realized soon after that was a mistake. I was in a really bad place when I made the decision and so I probably wasn’t thinking clearly and I just couldn’t sleep at night.’ 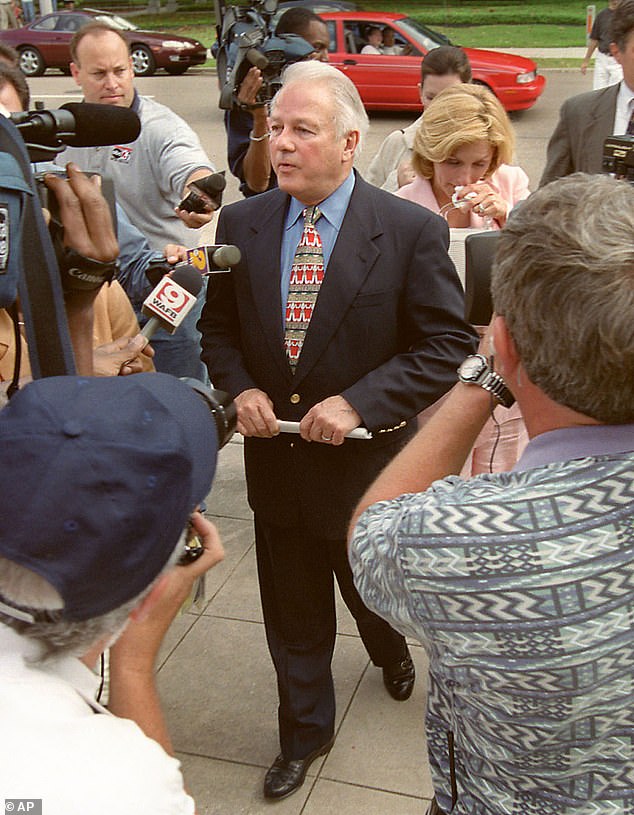 Edwards and his second wife Candy leaving the Russell B. Long Federal Courthouse in 2000 after he was found guilty of 17 counts of racketeering and fraud in his gambling corruption trial 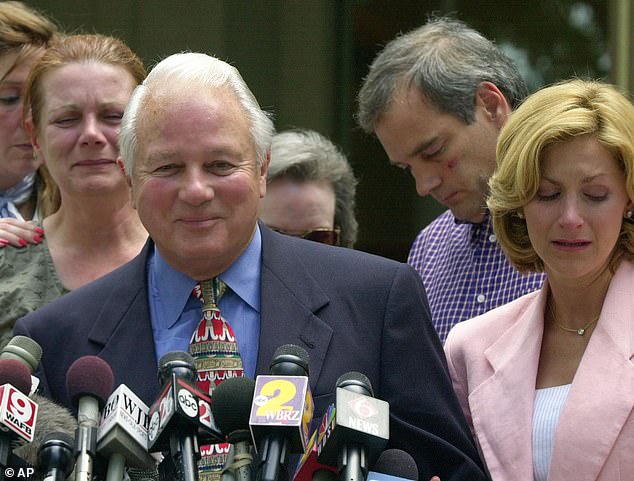 Anna, Edwin, David and Candy Edwards left to right after he was convicted in 2000

Trina said she wanted to bring her husband ‘back home’ and felt ‘relief’ as soon as she did.

‘I would go out there and I would try to walk out to the gravesite and I just couldn’t make myself get out of the car. I just hated it. And so I just decided I wanted to bring back him home,’ she said.

‘So that’s what I did. I felt a relief the second they brought him back.’

Trina said she plans to scatter her husband’s ashes somewhere where the public can pay their respects to the governor – who was a popular figure despite his controversy.

One idea is that he will be laid to rest near Huey Long’s in the public gardens facing the State Capitol.

Trina, who has two older sons from a previous marriage, was just 32 when she wed the 83-year-old ex-governor in July 2011.

She started writing to him when he was sent to prison in 2000 convicted of taking bribe money in exchange for riverboat casino licenses.

Trina said they spoke for seven hours during her first visit to him in jail.

On the second visit, she said he told her he loved her and was going to marry her.