A Western Sydney man has gone viral with a video of the moment he evades police who were ‘creeping up’ in a car like they were ‘going to do a drive-by’ – as he runs out of his Mercedes and into his mother’s house.

Sam Mario, who captioned the video ‘Merrylands cops acting like gangsters’, said he had just pulled up at the house when he noticed something strage.

In footage captured from a security camera at the house, a car can be seen slowing down near his Mercedes.

‘I see this car creeping up like it’s going to do a drive-by,’ Mr Mario says in the video, which has racked up 70,000 views on TikTok since Tuesday night.

After realising it was a police car, Mr Mario quickly makes his way to the house as it continues up the street to do a U-turn.

Commentating over the the CCTV footage, Mr Mario says: ‘Lock the car go straight inside, I’m like yeh mate I know you guys are coming but you have to be quick enough.’

When the officers return to the house, they get out of their car and approach Mr Mario’s vehicle. 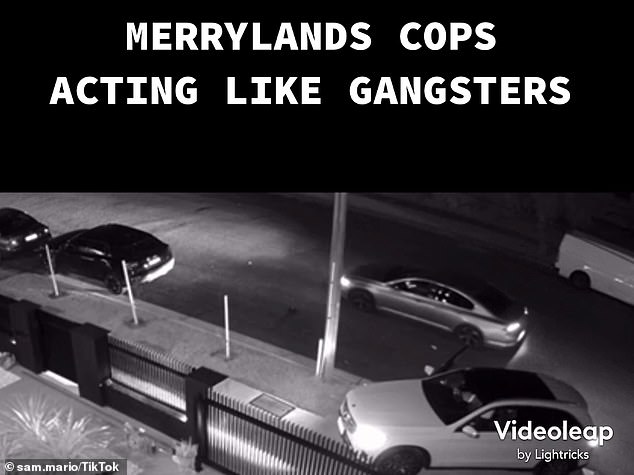 Sam Mario had just arrived at his mother’s house in the Western Sydney suburb of Merrylands, only to notice a car driving slowly past him (pictured) which was captured on CCTV

Mr Mario says: ‘Apparently my car is parked incorrectly so he wants to give me a ticket for that… yeh okay man.’

He said the officers tried to get him to come back outside: ‘Nah f**k off, don’t come near me, you can’t do s**t I’m already in my private property.’

The officer walks around to see if the car is open, but Mr Mario quickly locks it.

As they return to their car, Mr Mario jokingly said as he watched them: ‘What are you going to do now B1, the other one’s said I don’t know B2.’ 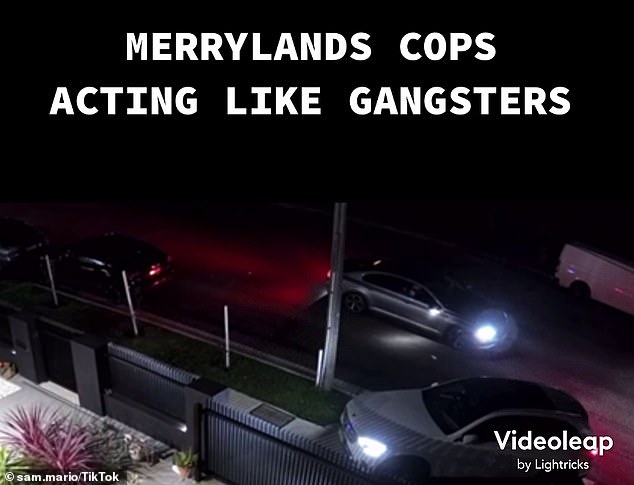 Mr Mario eventually goes back outside to confront the officers and tells them to f**k off.’

The officers then decide to drive off after Mr Mario continued to ignore them.

The video received a significant reaction from members of the public, with many praising the voice-over throughout the TikTok.

‘The commentary is gold,’ one person said.

A second expressed: ‘Have you ever thought to be a commentator as a second job?’

‘It’s actually sick how they think they can do anything. Good on you for telling them to f right off,’ a third said.

Georgia to pay $4.8m to family of Julian Lewis, driver shot by state trooper after not pulling over

US pharmacist accidentally gave girl, 4, Covid vaccine instead of the flu shot