Legislation expanding healthcare for military veterans exposed to toxic burn pits passed in the Senate in an overwhelming vote on Tuesday evening.

The final votes are still being counted.

All 11 votes against the Honoring Our PACT Act were cast by GOP lawmakers.

It comes after 47 Republicans sunk the bill last week over a last-minute change by Democrats to switch the funds from ‘discretionary’ to ‘mandatory.’

GOP lawmakers accused Democrats of creating a ‘slush fund’ with the move.

Comedian-turned-activist Jon Stewart was seen visibly emotional as he and several military veterans watched the Senate Majority Leader Chuck Schumer talk about the gravity of the moment just before the final vote.

Amendments made by Republican Senators Pat Toomey of Pennsylvania and Marsha Blackburn of Tennessee and Rand Paul of Kentucky all failed to net the 60 votes needed to pass.

An amendment by Paul to limit foreign aid to help pay for the bill failed with 90 votes against and just seven votes in favor.

Another one by Toomey, who led the successful Republican opposition to the bill last week, would have returned the funds to their original ‘discretionary’ category.

Toomey said he would switch his vote if his amendment passed. It failed in a 47 to 48 vote, and he did not end up voting for the final bill.

Moderate Senator Susan Collins on Maine was the lone Republican to join Democrats in opposition to Toomey’s measure.

Blackburn’s measure, which would have added a privatization element to VA care, was the only one with more votes for it than against at a 48-47 margin – though it needed 60 votes to pass. 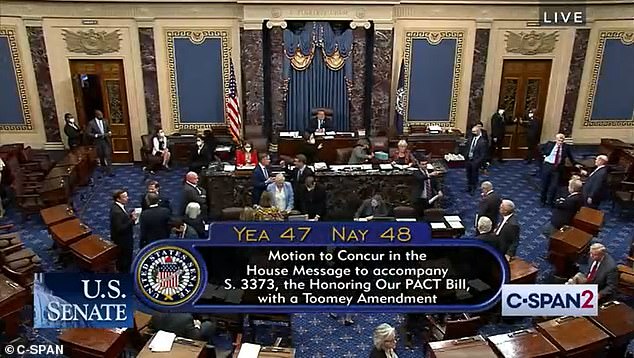 Veterans, their families and other activists such as Stewart protested on the steps of the US Capitol for days after an attempt to pass the bill was derailed by Republican opposition last week.

GOP lawmakers had accused Democrats of adding unrelated spending into the legislation.

The bill now goes to President Joe Biden’s desk for his signature, having cleared the House of Representatives in July.

The commander-in-chief has made clear on multiple occasions how personal the issue of toxic burn pits is. He blamed exposure to such toxins in Iraq for his son Beau Biden’s death from brain cancer at age 46.

In June, the bill passed Senate with an overwhelming 84 to 14 vote but was forced back to the floor by a technical error – where it fell five votes short of the 60-count threshold. 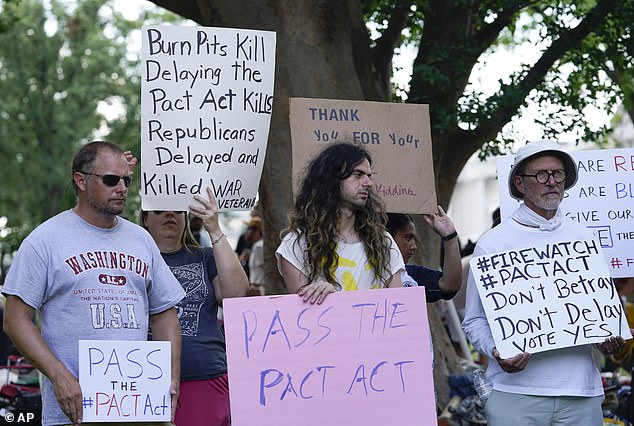 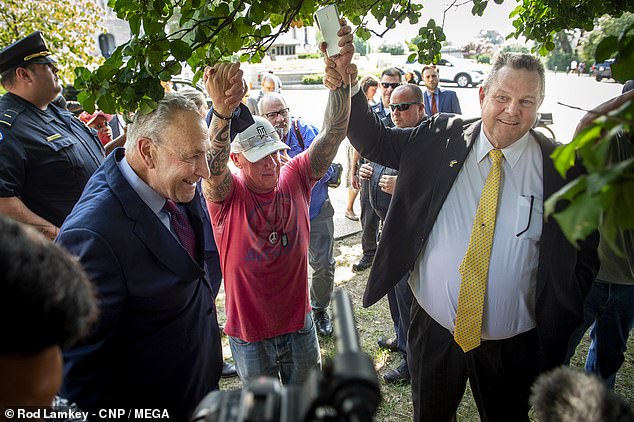 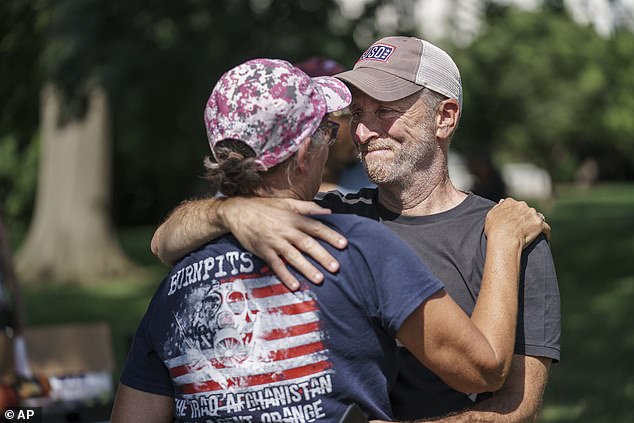 Toomey led GOP opposition to the bill, he told CNN’s State of the Union,  because of ‘an unrelated $400 billion spending spree that has nothing to do with veterans and that won’t be in the veterans space.’

The bill’s text had moved the spending from the ‘discretionary’ to ‘mandatory’ category, while Toomey’s amendment would reverse that.

Stewart had argued on ABC News’ This Week that Toomey’s amendment in reality would place a cap on the funds, forcing sick veterans to return to the Capitol after a certain amount of time to ask for the money to be renewed.

The PACT Act will remove the burden of proof from veterans who suffer from a litany of illnesses from asthma to terminal cancers after being exposed to toxins in Iraq and Afghanistan.

It would expand VA healthcare eligibility benefits for roughly 3.5 million veterans, according to the Pentagon.

The measures adds 23 respiratory sicknesses and cancers that have been linked to toxic burn pits into law, easing the path for veterans suffering them to get care.

All veterans would also get toxic exposure screenings at VA hospital appointments. 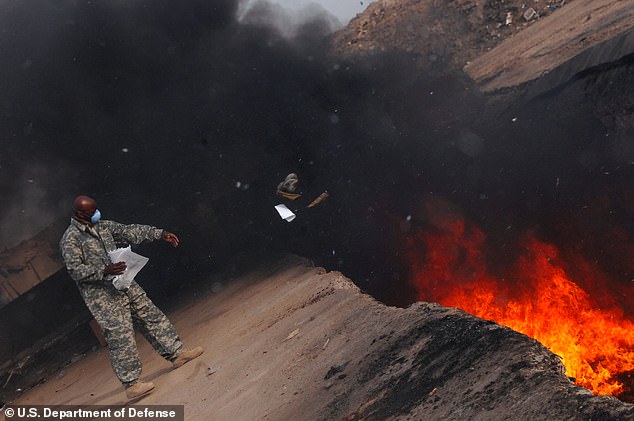