The trans Old Dominion professor who was forced to resign after they defended pedophiles by saying society should refer to them as ‘Minor Attracted Persons’ has been hired Johns Hopkins University.

According to the college, the professor, 34-year-old Allyn Walker, will start work as a postdoctoral fellow for the Baltimore school on May 24 – at a center aimed at preventing child sexual abuse.

The center, created in 2012, describes itself on its website as ‘a research center that  creates, through rigorous science, a public health approach to preventing child sexual abuse.’

Walker, who uses they/them pronouns, was forced out of Virginia’s Old Dominion last November, after more than 15,000 outraged onlookers signed a petition to have them removed for the contentious remarks made by the professor that were expanded on in the 2021 book ‘Long Dark Shadow: Minor Attracted People.’ 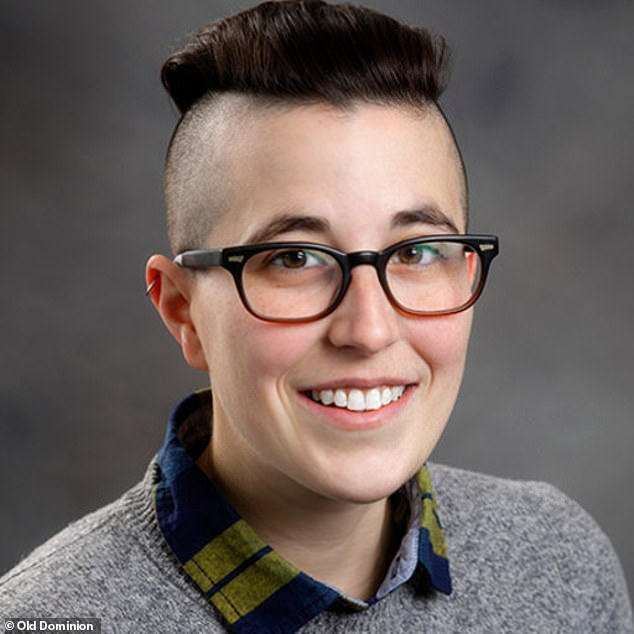 Dr. Ally Walker, the trans Old Dominion professor who was forced to resign from the school  last year after they defended pedophiles saying society should call them ‘Minor Attracted Persons’ has been hired by a Johns Hopkins center aimed at preventing child sexual abuse

According to the Baltimore college’s Moore Center for Prevention of Child Sexual Abuse, the professor, 34-year-old Allyn Walker, will start work as a postdoctoral fellow on May 24

In the book, Walker attempts to destigmatize pedophilia and encourages people to refer to them as ‘Minor Attracted People,’ asserting they should not be ostracized for their urges – which Walker says cannot be helped.

Other contentious claims made by the professor – who possesses a doctorate in criminal justice – in the book include suggestions that pedophiles should also be provided with child-like sex dolls to satisfy their urges, and that the sex crime was not ‘immoral.’

While promoting the publication, Walker said: ‘A lot of people when they hear the word pedophile, they automatically assume that means sex offender. That isn’t true. And it leads to a lot of misconceptions.

‘They believe pedophiles don’t “choose” who to be attracted to – so [it] shouldn’t be considered ‘immoral.’

The professor further asserted that pedophiles should be offered ‘help’ and aren’t’ ‘destined’ to act on physical urges. 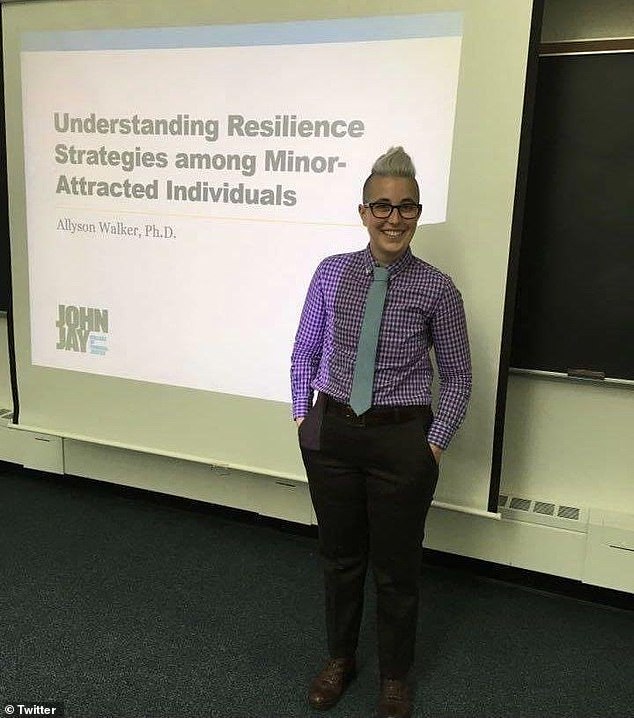 Contentious claims made by the professor – who possesses a doctorate in criminal justice – in the book include suggestions that pedophiles should also be provided with child-like sex dolls to satisfy their urges, and that the sex crime was not ‘immoral’

Walker was also panned for remarks they made in a November interview, where they argued people can be attracted to children without acting on that impulse.

The professor defended using the term ‘minor-attracted persons’ to describe the phenomenon.

‘A lot of people when they hear the term pedophile, they automatically assume that it means a sex offender. And that isn’t true. And it leads to a lot of misconceptions about attractions toward minors.’

The remarks quickly inspired outrage among students, who said the professor was using a ‘blanket’ term for pedophilia and was an apologist for criminals.

The university’s own Trans Advisory Board released a statement to call Walker’s remarks ‘reprehensible’, damaging to the victims of pedophilia and not reflective of the views of the trans community at large. 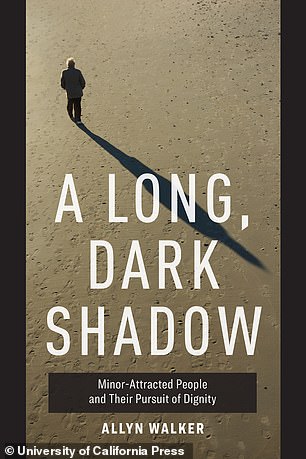 PICTURED: Walker’s book, in which the 34-year-old attempts to destigmatize pedophilia and encourage people to refer to them as ‘Minor Attracted People,’ asserting they should not be ostracized for their urges

The backlash spurred school brass to place Walker on leave, saying it was for their own safety.

A petition was then drafted by students calling for Walker’s nixing, which saw the professor forced out of the Virginia school late last year.

In a joint statement with Old Dominion announcing their resignation – which only took effect this month, at the end of the school year – Walker claimed that she was a victim of a smear campaign by the media and online observers due to their being transgender.

Walker also asserted that the research in their book that attempted to destigmatize pedophilia had been ‘mischaracterized’, adding claims that threats had been made against them and ‘the campus community generally’.

‘My scholarship aims to prevent child sexual abuse,’ Walker said. ‘That research was mischaracterized by some in the media and online, partly on the basis of my trans identity.

‘As a result, multiple threats were made against me and the campus community generally.’

They went on: ‘I want to thank Old Dominion University for giving me the opportunity to teach and to conduct my research, and the ODU Department of Public Safety for monitoring the threats against me and the community.

‘I am particularly grateful for the outpouring of support from many among the ODU community, as well as others in my research fields who have publicly affirmed the value of my work in advancing child safety.’

Old Dominion President Brian Hemphill added: ‘We have concluded that this outcome is the best way to move forward.

‘We hope today’s action helps bring closure for our Monarch family. As we move forward, I encourage all members of the Monarch family to continue our efforts toward healing and civil discourse.

‘The safety and security of individual Monarchs and our collective campus are of the utmost importance. For ODU, these will always remain top priorities as we pursue our mission in a caring, inclusive, and supportive community, one that respects academic freedom and remains willing to discuss controversial ideas in an atmosphere free of intimidation or violence.’

Following the announcement, Walker said in a statement: ‘I want to be clear: child sexual abuse is an inexcusable crime.

‘As an assistant professor of sociology and criminal justice, the goal of my research is to prevent crime,’ Walker asserted.

‘I embarked on this research in hopes of gaining understanding of a group that, previously, has not been studied in order to identify ways to protect children.’

So can I reuse an N95 mask – and why you shouldn’t get a KN95 one. All you need to know about masks

Covid-19 Australia: Gatherings of up to five people allowed in Sydney as restriction eased

DAN HODGES: Why hasn’t the EU stepped up to deal with Ukraine?