They look like high-tech smart speakers or designer coffee tables and come with grand claims they can purge rooms of harmful pollutants, allergens, bacteria, fungal spores and even the Covid virus.

Air purifiers – which suck in a room’s air and filter it before pumping it back out – are must-haves for health-conscious consumers, it seems. A survey from the Government’s Office for Product Safety and Standards found one in 12 Britons owned one.

Many said they made the purchase – often costing hundreds of pounds – due to concerns about air pollution and, of course, Covid. So it’s not hard to see the appeal.

Mounting evidence links poor air quality to chronic illness. Exposure to pollution raises the risk of dementia, heart disease and lung conditions such as asthma, as well as causing pregnancy problems and damage to unborn children.

Emissions curbs on traffic, agriculture and industry have had an impact, with outdoor air pollution levels improving over the past decade. Despite this, in April, Imperial College London researchers found that roughly 97 per cent of UK homes are in areas that suffer from air pollution above limits set by the World Health Organisation. 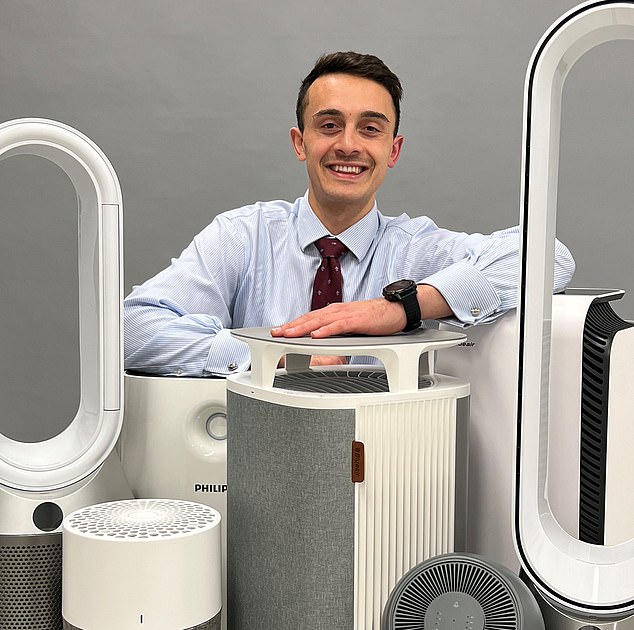 Testing times: Cameron Henderson with some of the air purifiers. The gadgets – which suck in a room’s air and filter it before pumping it back out – are must-haves for health-conscious consumers, it seems. A survey from the Government’s Office for Product Safety and Standards found one in 12 Britons owned one

And, more worryingly, indoor air quality can be much worse than the air outside. Along with fumes that drift in from the street, gases and compounds are released by stoves, ovens, boilers and cleaning products, and even emitted by new furniture.

The environmental push to better insulate homes could compound problems – airtight, draught-proof rooms may be more fuel efficient but they also seal in toxins.

And then along came Covid. Initially it was believed the infection spread via close contact or through contaminated surfaces. However, it is now known that transmission is mainly airborne – the virus floats in the air around us, like invisible smoke. Could an air purifier offer a simple – if pricy – solution to both problems?

The answer, according to Alastair Lewis, Professor of Atmospheric Chemistry at University of York, is yes – as long as you choose the right one.

One of the main causes for concern in terms of air pollution are solid particles known as particulate matter, or PM. These are graded by size in microns.

For example, those rated PM10 – ten microns in diameter – are coarse, larger particles such as dust, mould and pollen that can irritate the eyes and throat. A human hair is roughly 50 microns in diameter, so PM10 is a fifth of this in size and in a high concentration these may be visible.

Air pollution is thought to be behind up to 40,000 deaths each year in the UK alone.

Particles rated PM2.5 – sometimes referred to as fine particles – are small and more harmful as they can reach deep into the lungs. These are let off by cooking, heating systems, burning candles and air fresheners, to name just a few common sources in the home.

Prof Lewis says: ‘Larger particles can cause irritation and coughing but smaller ones are more insidious and can penetrate further into the lungs. As we breathe them in they can trigger conditions such as asthma and other breathing difficulties. They also build up over years of exposure and can cause heart and lung diseases.’

He suggests choosing an air purifier that contains a high-efficiency particulate air (HEPA) filter – which most do – as these are proven to mop up PM10 and PM2.5.

Air purifiers work by pushing air through multiple layers of fine weave fibreglass or polypropylene, a type of plastic, which traps the harmful particles.

‘HEPA filters have a good track record,’ says Prof Lewis. ‘They work by physically trapping particles – a bit like coffee grounds in a coffee filter.’

Gasses are another component of outdoor and indoor air pollution, and getting rid of these presents more of a challenge. ‘Molecules in gasses are smaller, and can pass through HEPA filters – just like the water and flavour makes it through the coffee filter,’ explains Prof Lewis.

Air purifier manufacturers have addressed this and the latest devices include tech, such as activated carbon filters – made from a porous and absorbent material derived from charcoal – aimed at mopping up these toxins.

‘With these newer types we have to take manufacturers at their word,’ says Prof Lewis. ‘They’ll have carried out testing in labs, but how devices perform in the real world can differ.’

So what of the health benefits? A 2003 US study of 30 asthmatic adults who share a home with cats or dogs found running an air purifier in the living room and bedroom improved asthma symptoms for two-thirds of participants.

Other trials found linked air purifier use with better sleep, lower blood pressure and improved lung function. And could they prevent Covid transmission?

Research by Addenbrooke’s Hospital in Cambridge found that using portable air purifiers on wards swamped with Covid patients removed almost all traces of the virus from the air, reducing the risk of transmission.

Leeds University is carrying out a trial to see whether purifiers could be effective in schools for reducing Covid infections. Prof Mark Mon-Williams, the project leader, told The Mail on Sunday that air purifiers ‘are effective in removing viral particles from the air, so we can be confident the systems will reduce Covid-19 virus circulation within the classroom’.

Prof Lewis says: ‘If you have a respiratory condition such as asthma, or if you’re sensitive to allergens, you might notice an immediate improvement in your symptoms through using an air purifier.’

However, he adds: ‘Most of us don’t notice differences in air quality straight away. The effects of poor air quality are subtle and build up over years to cause more serious conditions.’

Most purifiers are designed to be left on and contain sensors that monitor the air continually, turning the power up and down automatically as and when needed.

Prof Lewis says: ‘If you’re a hairdresser working with chemicals, then it might be running on full blast 12 hours a day. But the average person will find it’s only on for half an hour or so while they’re cooking or cleaning. If pollen is your worry, you’ll need the purifier when the pollen count is high.’

So which air purifiers are worth investing in?

Who cleaned up in our purifier trial?

To put the devices to the test, we sprayed five squirts of deodorant in their vicinity, to mimic high levels of pollution, and recorded how quickly they responded and how long they took to clear the air.

In addition to a HEPA filter and activated carbon filters – an absorbent material that mops up additional fine particles the HEPA might miss – this device contains a catalytic converter similar to the one found in a car’s exhaust. Dyson claims that this removes formaldehyde gas from the air.

‘Formaldehyde is emitted by industrial glues and paints, chipboard and other building materials, and as it’s a gas it wouldn’t be trapped by a HEPA filter,’ says Prof Lewis.

We asked Dyson for more detail about their converter but they were tight lipped.

Catalytic converters in cars work by channelling toxic exhaust fumes, such as carbon monoxide, through a honeycomb-like structure made from a metal such as platinum. The metal is heated and this triggers a chemical reaction, turning the gasses into harmless water vapour and carbon dioxide.

‘I suspect it’s something similar,’ says Prof Lewis. Dyson claim this device – which doubles up as a cooling fan – can purify a large 870 sq ft room – the size of a two-bedroom flat – nearly 13 times an hour. Prof Lewis says this might be overkill ‘unless you’re really seriously affected by allergies’.

In the deodorant test it reacted instantly, showing on the display a rising ‘score’ for PM2.5 – and it cleared the air in under two minutes. The HEPA+Carbon filter costs £65 and needs changing every 12 months, based on average use of 12 hours a day. 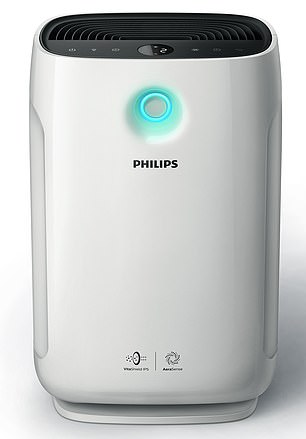 This has both HEPA and activated carbon filters, and in a study carried out in a 300 sq ft room – the size of an average open-plan living room and kitchen – it removed up to 99.9 per cent of flu virus from the air.

It can change the air in a 215 sq ft space – similar to a large bedroom – nearly six times an hour.

It uses 56 watts of energy per hour on its maximum setting – equivalent to a standard lightbulb.

In the deodorant test, the device reacted immediately, flashing red for poor air quality, and took 19 minutes to return the air to ‘good’. 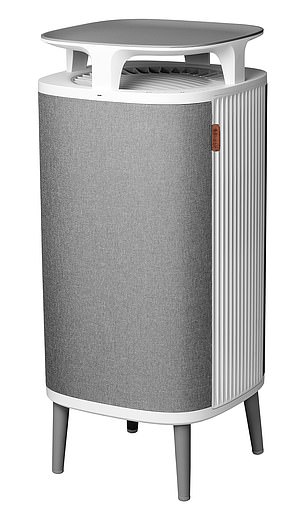 Blueair claim their DustMagnet can ‘catch dust before it settles on floors and surfaces’.

The HEPASilent and activated carbon filters are surrounded by a stainless steel mesh that’s electrically charged. This creates a field of static that dust, hair and other larger particles stick to – in a similar way to static electricity generated by friction makes a balloon stick to a jumper.

‘This adds an extra layer of protection,’ says Prof Lewis. ‘Dust comprises of all sorts of things, including human and animal skin, hair, fur and other things people are often allergic to. The less dust, the fewer allergy problems.’

It can change the air in a 355 sq ft living room nearly five times an hour.

In the deodorant test, the DustMagnet kicked in at full blast immediately and took seven minutes to return the air quality to ‘excellent’ – a little more noisily than the firm’s HealthProtect device but not as loud as its Blue 3210.

The main filters cost £79 and need replacing every six to 12 months, depending on the indoor conditions. 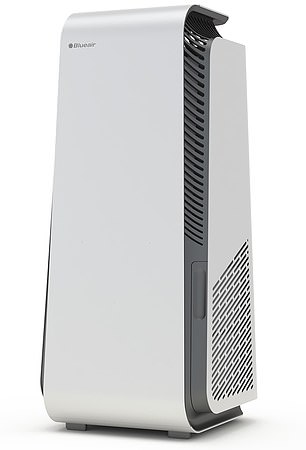 It also has an activated carbon filter and a ‘charged’ filter similar to the one in the DustMagnet below.

Independent lab tests found the purifier was able to remove 99.99 per cent of airborne Covid particles, which the firm says is a first in the air purifier market.

It can be controlled via an app – the Dyson, Philips and DustMagnet can too – and has sensors to detect changes in air quality that trigger the device to work harder.

Blueair is a Swedish company that makes nothing but air purifiers, and this one is impressive in action. The purifier can change the air nearly five times an hour in a room that is 409 sq ft – the size of a standard two-car garage.

In the deodorant test the HealthProtect turned on full power immediately – although the fan remained whisper-quiet – and returned the air quality to excellent in under a minute.

The display tells you in detail just how clean (or dirty) the air is at any point.

The filters, which cost £99, need replacing every six to 12 months. A warning light indicates when this is due. 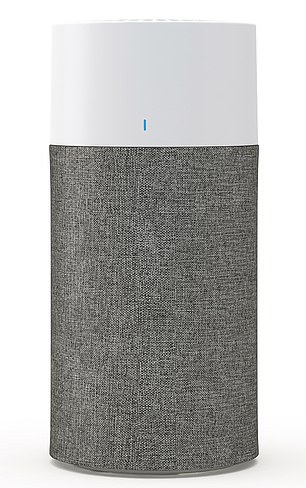 The filter also includes a layer of activated carbon.

Weighing just 3lb 12oz, this device has a motor powerful enough to change the air nearly five times an hour in a room that is 182 sq ft – the size of a small bedroom.

It uses between two and ten watts of electricity per hour – which is less than the average LED lightbulb.

The filters cost £27, and if the device is left to run 24-hours a day they will need changing every six months.

The deodorant test seemed to confuse the Blue 3210.

Its little light went red – which indicated poor air quality – but then seemed to get stuck on its noisy full blast setting.

After 30 minutes of that, we just switched it off.

It has a nice-looking washable fabric covering which sits around the device, acting as a ‘pre-filter’ – it stops bigger dust particles from getting sucked into the filter inside, where they may cause blockages.

‘This will extend the lifetime of the main filter,’ says Prof Lewis.

EXC: Hundreds gather for Vicky White's funeral after she shot herself dead during police chase

Ballet bosses change The Nutcracker because of ‘racial stereotypes’