UK economy is FINALLY bigger than before the pandemic after growing by 0.9% in November with Rishi Sunak hailing ‘grit of the British people’ – but the surge was BEFORE Omicron restrictions were imposed

Rishi Sunak today hailed the ‘grit of the British people’ after the economy finally clawed back ground lost due to the pandemic.

Official figures show GDP grew by 0.9 per cent in November, meaning that the level is now higher than in February 2020.

The Chancellor said it was ‘amazing’ news and appealed for people to get booster jabs to keep the recovery on track.

However, the picture is thought to have worsened since November due to the emergence of the Omicron wave and the government imposing ‘Plan B’ restrictions including masks, work from home advice and masks in some settings. 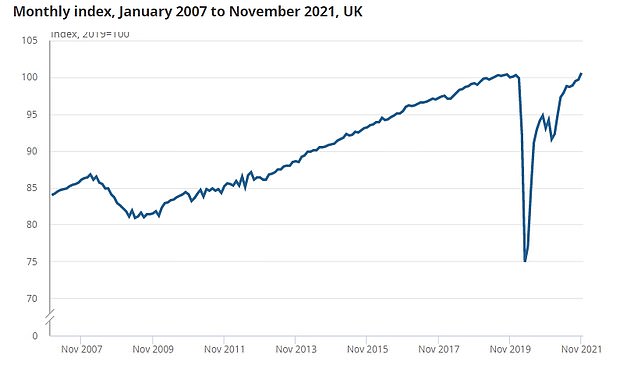 Official figures show GDP grew by 0.9 per cent in November, meaning that the level is now higher than in February 2020

ONS Chief Economist Grant Fitzner said: ‘The economy grew strongly in the month before Omicron struck with architects, retailers, couriers and accountants having a bumper month.

Construction also recovered from several weak months, as many raw materials became easier to get hold of.

‘This meant that monthly GDP exceeded its pre-pandemic level for the first time in November.’

Mr Sunak said: ‘It’s amazing to see the size of the economy back to pre-pandemic levels in November – a testament to the grit and determination of the British people.

‘The government is continuing to support the economy, including through grants, loans and tax reliefs for businesses, and our Plan for Jobs is ensuring people up and down the country have fantastic opportunities.

‘We all have a vital part to play to protect lives and jobs, and I urge everyone to do theirs by getting boosted as soon as you can.’