A Ukrainian woman living in crime-ridden Portland has shared a bloody video of her bullet-shattered face after being caught in a grisly shooting crossfire in broad daylight.

Katie Guzenko, 27, was driving in her car during the afternoon when she was suddenly shot, as the bullet pierced through her nose and exited the car through the window.

Horrific footage shows the woman hyperventilating with her own crimson blood gushing over her face before she realizes what has happened to her.

Thick layers of blood pour from her wounds in the immediate aftermath of the shooting, seen in a clip recorded by Katie in her car.

She’s now advocating for more to be done about gun violence in Portland, Oregon, after her family who are living in war-torn Ukraine said they were fearing for her safety in the US.

It comes as the progressive Democrat-led policies of America’s most woke city continues to struggle to curtail violent crime.

Katie was driving near Southeast 130th Avenue and Powell Boulevard in Portland on July 20 running errands when she was caught in the crossfire shooting. 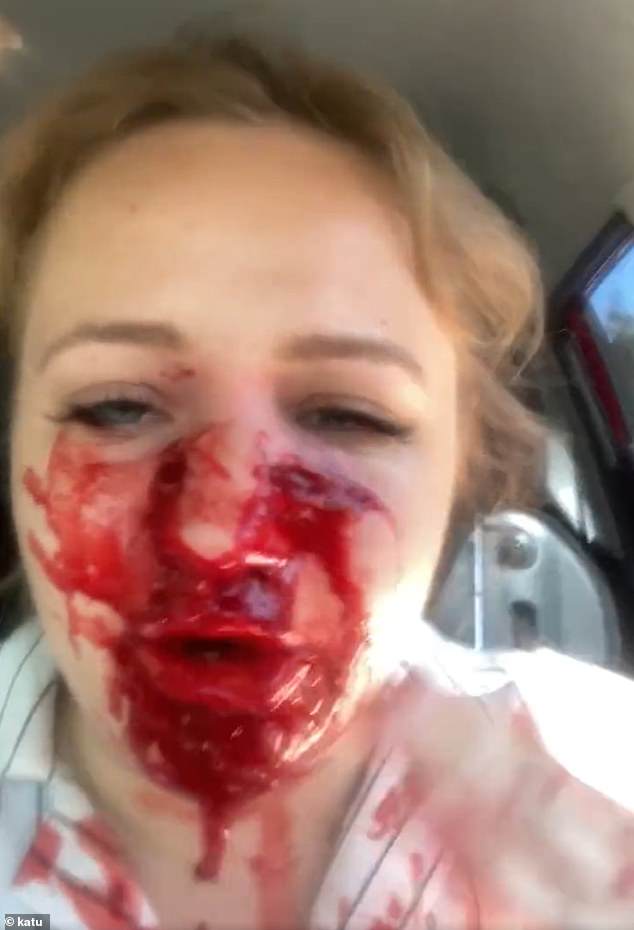 Katie Guzenko, 27, was driving in her car during the afternoon when she was suddenly shot, as the bullet pierced through her nose and exited the car through the window 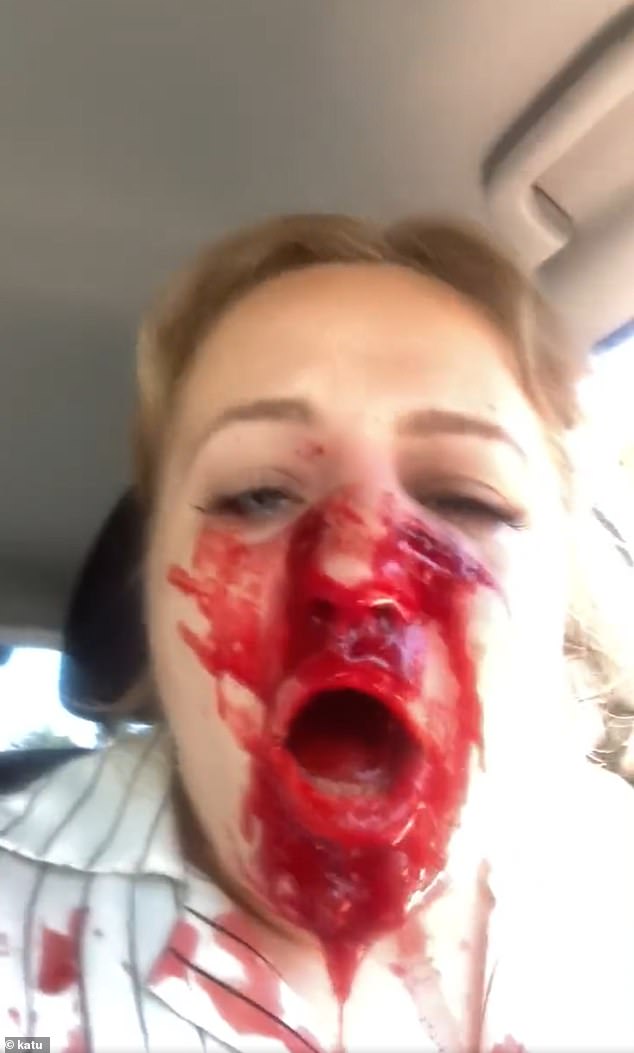 The Ukrainian woman, living in Portland, recorded the blood oozing down her face after she was shot by someone on the street on July 30 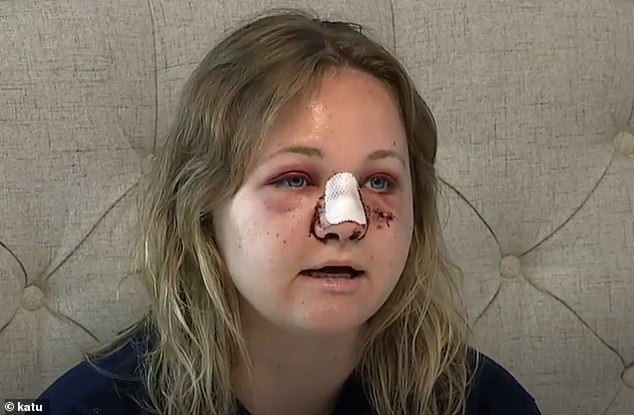 She is now on the road to recovery, but has become an activist to get the city to do more about gun crime

In a video she recorded, her face bloodied, she tells a stranger, ‘I’m so scared. I was driving, and I heard shots.’

A stranger, who rushed over to help, attempted to calm her down, saying: ‘It’s going to be okay.’

Katie, while taking deep breaths, says: ‘Somebody shot me through my car.’

It’s believed that Katie’s face was pierced by the bullet during a gang-related confrontation by two people standing on opposite sides of the street.

Images show that the passenger window of Katie’s car was shattered by a bullet, which passed through and hit her, before going out of her open driver’s window.

Speaking to Katu in the aftermath, Katie said that her family living in Ukraine reached out to see if she was okay – despite them being in the middle of a war with Russia.

She said: ‘My family there is reaching out to me to make sure that I’m OK, when they’re the ones in a war zone. 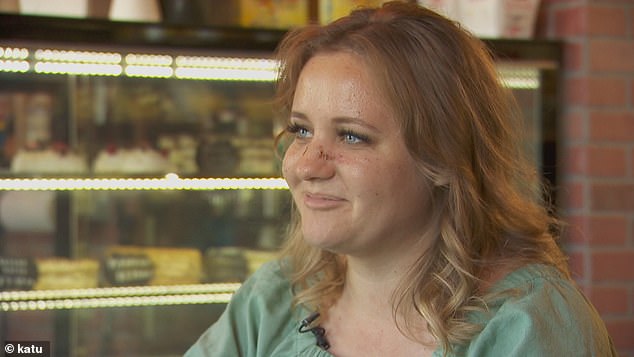 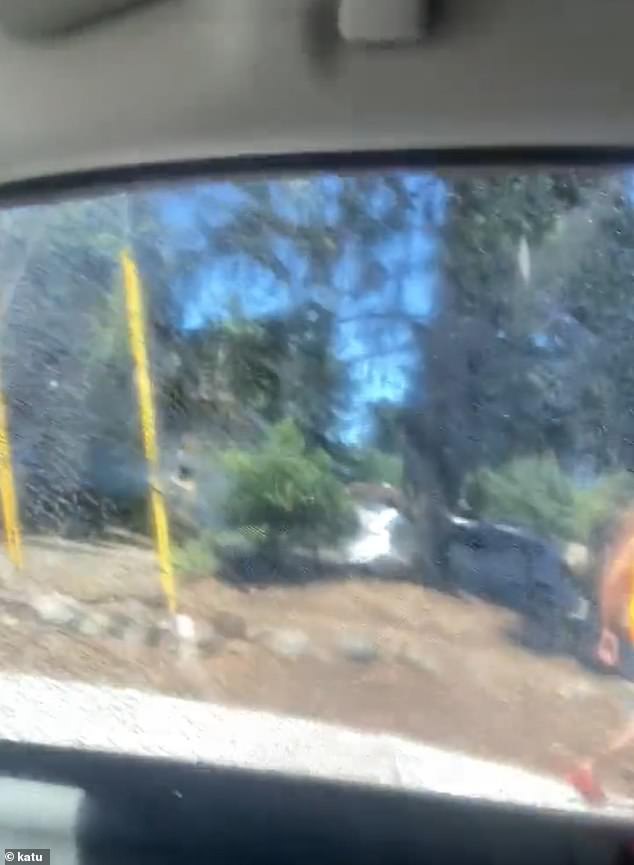 The bullet pierced the car window, traveled through and hit her in the face during the ordeal 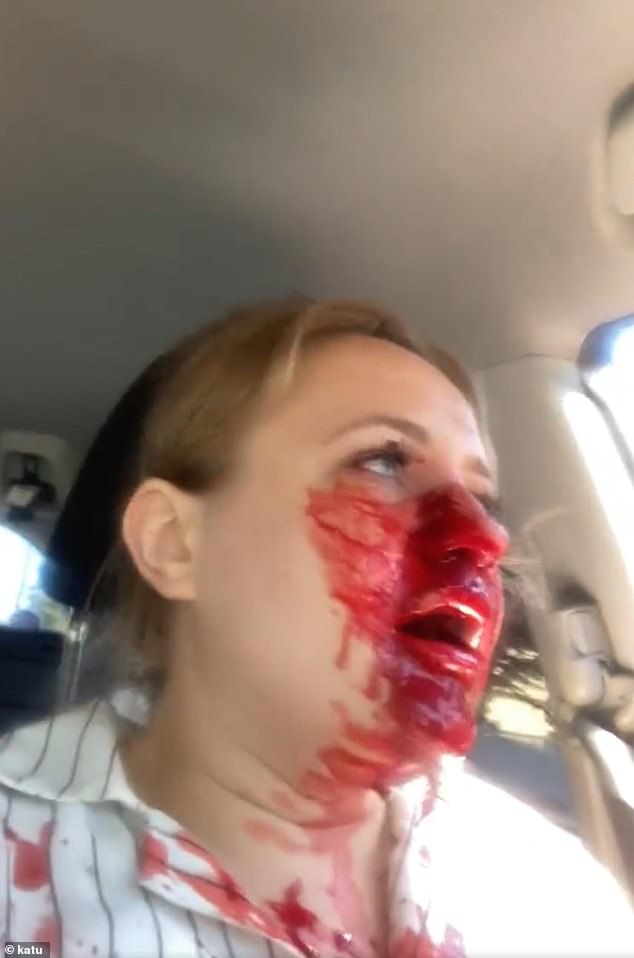 A stranger, who rushed over to help Katie, attempted to calm her down, saying: ‘It’s going to be okay.’

‘These wounds that you see on my face is the result of a 40-caliber bullet that punctured right through my nose.’

The day after Katie’s horrific ordeal, Portland Mayor Ted Wheeler declared a state of emergency over gun violence and set a goal to reduce shootings and gun-related deaths in the city by 10 per cent over the next two years.

Katie told city commissioners: ‘Ted Wheeler‘s plan to decrease gun violence by 10 per cent in two years is an incredibly low target when comparing it to how much it’s increased.

‘Mayor, given that you’ve called us a gun violence emergency, I feel like very little is being done.’ 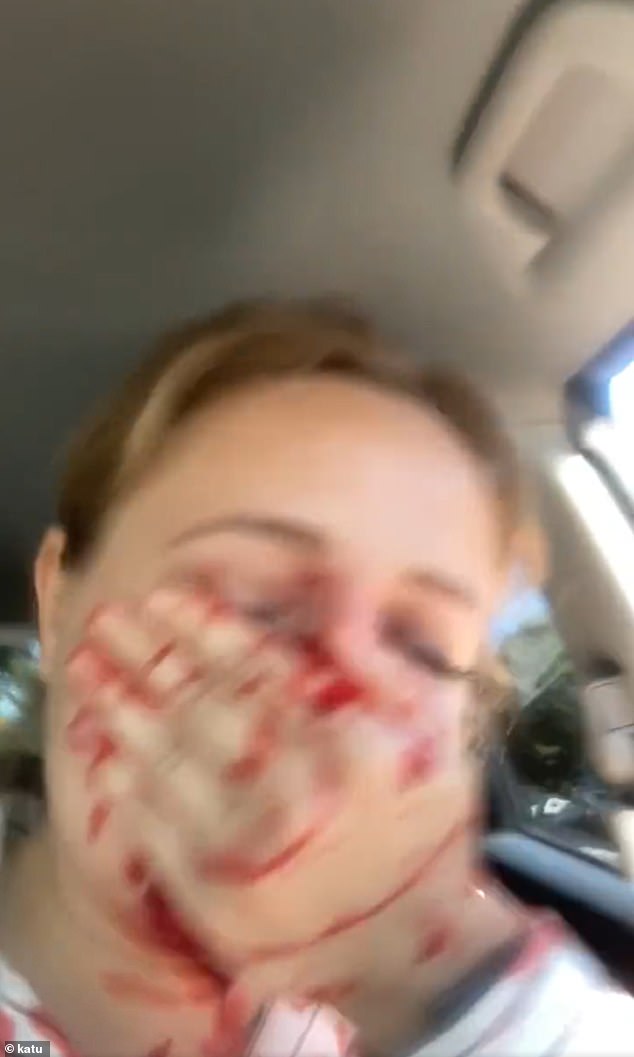 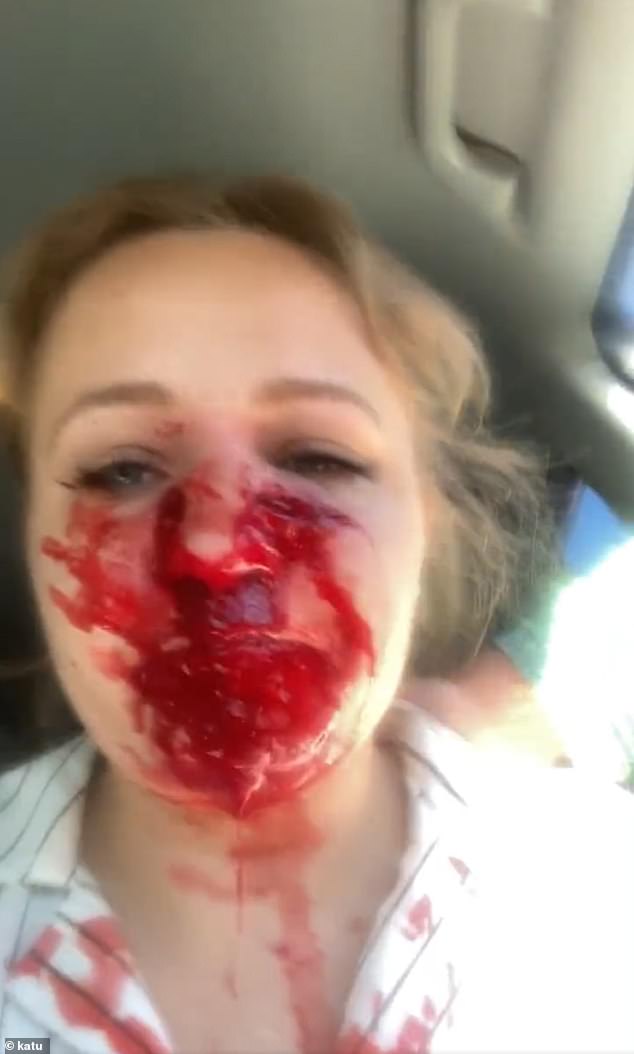 She added: ‘The problem has tripled, and we’re trying to reduce it by 10 per cent. It doesn’t seem like a good goal.’

Portland police data shows that in 2019, there were an average of 30 shootings a month – but now the number of shootings in the city has reached 112.

The Portland Police Bureau also reported that out of the 22 murders this year, all but one have been gun-related. Portland’s 21st murder happened in Dawson Park during the daytime, a third murder there in the last 15 months.

In addition to the surging murder rate, the city has also seen a significant number of shootings in the first two months of the year, totaling 264, up from the 190 during the same time last year. Gun-related injuries are also up – 68 compared to 64.

Violent crime has risen across the board throughout the Rose City, with assaults, kidnappings and rape all seeing sharp increases.

Still hungry? Now you can eat your plate!

Former gymnast sues for more than £150,000 after smashing her leg on Bear Grylls obstacle course