New data from New York City shows the much higher risk for hospitalization and death than unvaccinated people faced as the initial Omicron surge swept through the city last month.

For the week ending December 25, when Omicron first hit the city, unvaccinated New Yorkers were hospitalized at a rate of 179.84 per 100,000, versus 21.85 for vaccinated.

That means the unvaccinated were hospitalized 8.2 times more often on a per capita basis. It is a wider gap than the 6.3 hospitalization risk multiple that unvaccinated New Yorkers have faced on average since vaccinations started.

The latest data from the New York City Department of Health also showed that unvaccinated people were 8.9 times more likely to die in the final full week of December. 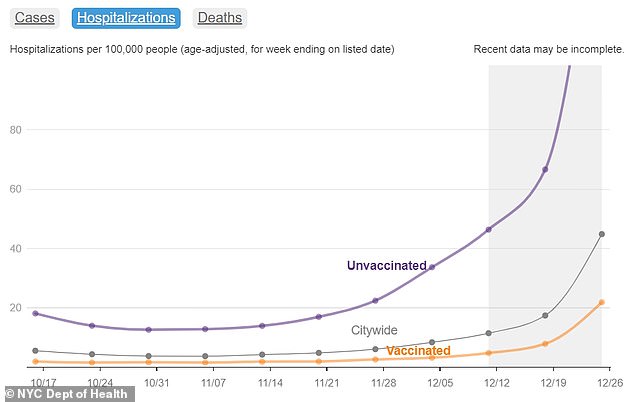 For the week ending December 25, when Omicron first hit the city, unvaccinated New Yorkers were hospitalized at a rate of 179.84 per 100,000, versus 21.85 for vaccinated 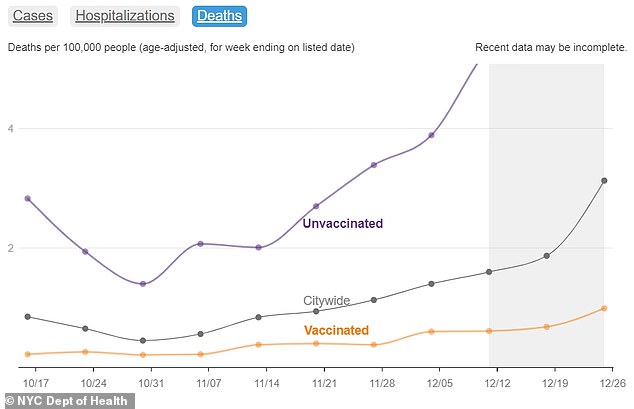 Unvaccinated people were 8.9 times more likely to die in the final full week of December. Due to a display error on the NYC website, unvaccinated deaths for 12/25 are off the chart

Statewide numbers also show that while the risk of hospitalization has been rising quickly for both the vaccinated and unvaccinated, the risk is much higher for those who have declined the shots.

On Thursday, the Supreme Court has stopped a major push by the Biden administration to boost the nation’s COVID-19 vaccination rate, a requirement that employees at large businesses get a vaccine or test regularly and wear a mask on the job.

At the same time, the court is allowing the administration to proceed with a vaccine mandate for most health care workers in the U.S.

The courts orders Thursday came during a spike in coronavirus cases caused by the Omicron variant. 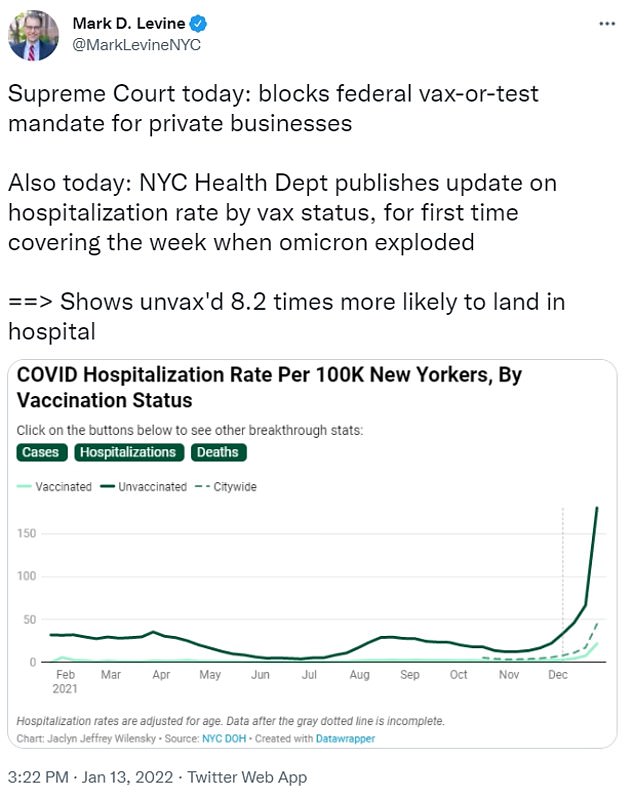 The court’s conservative majority concluded the administration overstepped its authority by seeking to impose the Occupational Safety and Health Administration’s vaccine-or-test rule on U.S. businesses with at least 100 employees.

More than 80 million people would have been affected and OSHA had estimated that the rule would save 6,500 lives and prevent 250,000 hospitalizations over six months.

‘OSHA has never before imposed such a mandate. Nor has Congress. Indeed, although Congress has enacted significant legislation addressing the COVID-19 pandemic, it has declined to enact any measure similar to what OSHA has promulgated here,’ the conservatives wrote in an unsigned opinion.

In dissent, the court’s three liberals argued that it was the court that was overreaching by substituting its judgment for that of health experts.

‘Acting outside of its competence and without legal basis, the Court displaces the judgments of the Government officials given the responsibility to respond to workplace health emergencies,’ Justices Stephen Breyer, Elena Kagan and Sonia Sotomayor wrote in a joint dissent. 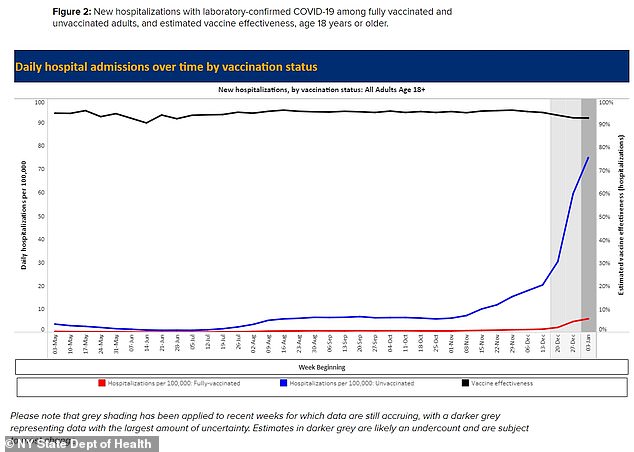 Statewide numbers also show that while the risk of hospitalization has been rising quickly for both the vaccinated and unvaccinated, the risk is much higher for those who have declined the shots 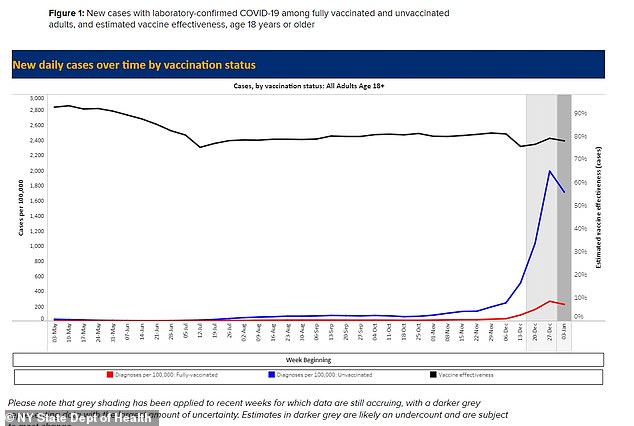 Biden said he was ‘disappointed that the Supreme Court has chosen to block common-sense life-saving requirements for employees at large businesses that were grounded squarely in both science and the law.’

Biden called on businesses to institute their own vaccination requirements, noting that a third of Fortune 100 companies already have done so.

When crafting the OSHA rule, White House officials always anticipated legal challenges – and privately some harbored doubts that it could withstand them.

The administration nonetheless still views the rule as a success at already driving millions of people to get vaccinated and encouraging private businesses to implement their own requirements that are unaffected by the legal challenge.

LIAM FOX: Now is not the time for a Tory leadership contest and a new PM