GRAPHIC CONTENT WARNING: See the horrendous injuries female backpacker, 30, suffered at a hostel when a stovetop left turned on set her shirt on fire

An American backpacker travelling around Australia is stuck here with mounting medical bills after she suffered horrific burns across her entire back when her shirt caught fire at a hostel.

Brianna Jonovitch, 30, had been staying at a hostel in Hobart in May and was using the communal kitchen when she was suddenly set alight.

A stovetop had been left unattended and managed to catch the back of her shirt, with the flames tearing through the skin on her back, underarms, hands and chest.

Ms Jonovitch was exposed to the flames directly for 30 seconds, leaving with her second and third degree burns on up to 13 per cent of her body.

The 30-year-old said she couldn’t understand at first how the fire had started, as her burner had been off for a few minutes, not knowing another had been left on.

‘I could feel the fire growing very big, very quick and could see panic on the face of my friend after she tried to swat it out but couldn’t,’ she told Daily Mail Australia.

‘I think I just realised I would need to do something or else it was going to get very bad very quickly.’ 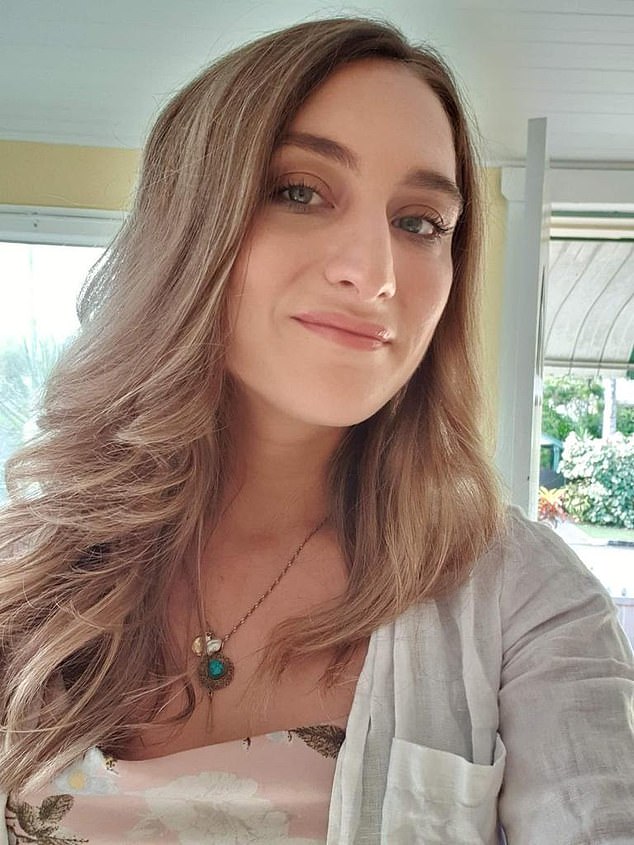 Brianna Jonovitch, 30, (pictured before the accident) had been staying in a hostel in Hobart in May and was using the communal kitchen when she was suddenly set alight

She remembered being told at school to drop and roll in the event of a fire, so she quickly hit the floor.

‘I’m pretty sure the tiles didn’t help and by that point the fire was the size of my back,’ the 30-year-old added.

‘I remember when the realisation hit me that the only way out would be to lift the two button up shirts I was wearing over my head.

‘Thinking about how that would bring the fire towards my hair and face that was very scary but there wasn’t an alternative so I just did it.’

Shocking photos shared by her sister Felicia Faulkner show just how severe the incident was, with the woman having to spend three days in hospital.

‘She was wearing multiple layers … but the floor of the kitchen was made of tile and was oily which made the fire worse,’ Ms Faulkner said.

‘She had to pull her burning shirt off over her head which left burn marks on her hands, underarms, chest and almost her entire back.’ 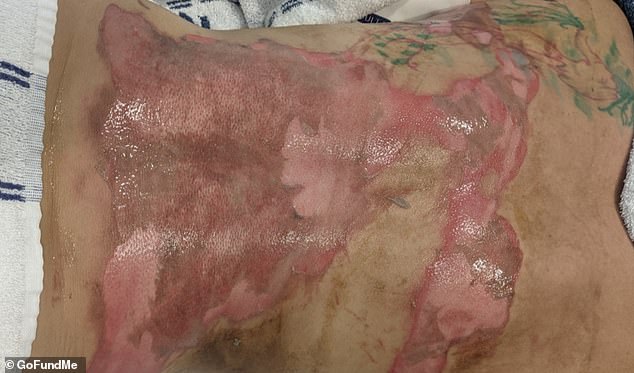 A photo shows the burns on her back three days after the incident in May. She had to spend three days in hospital

Ms Jonovitch has since moved into her sister’s home in Melbourne where she continues to receive treatment to her burns.

‘Several times a week we would have to bring her to the Alfred Hospital burns unit as an outpatient, to have her back scrubbed and wounds redressed. This has been a painful and difficult recovery,’ her sister said.

But the pain hasn’t ended there, with the American woman now facing a huge medical bill. 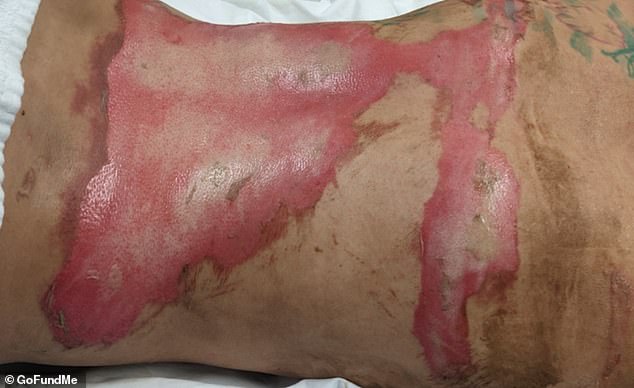 Pictured are her burns after one week. Her sister has since started a GoFundMe page to help pay off her hefty medical bills

She was staying in Australia on a working visa and at the time had no medical insurance.

Her sister has since started a GoFundMe with a goal of $12,500 to help pay off the fees.

Despite the horrific burns she suffered, Ms Jonovitch said she is ‘recovering well’.

‘At first was very very painful and I needed a lot of help. But now most of the pain is gone and it’s just working on scarring moving forward,’ she said.

She also credited the doctors and nurses that looked after her in Hobart.

‘They really went above and beyond their job descriptors in making sure I was comfortable and even trying to make me laugh when they could,’ she added.

‘It really helped me keep my spirits up during the whole ordeal.’ 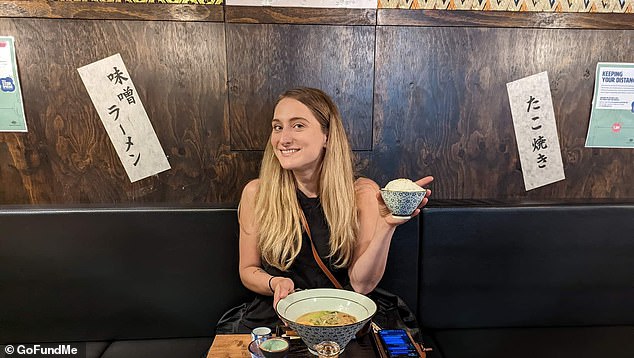 Ms Jonovitch was exposed directly to the flames for 30 seconds, leaving with her second to third degree burns to up to 13 per cent of her body (pictured before the accident)

Hamilton Island: Brother of a young bride who died in a golf buggy tragedy breaks his silence